A group of gay men have given some very straight answers to a series of awkward questions providing an insight to what growing up gay in Australia is like.

Wednesday night’s episode of ‘You Can’t Ask That’ on the ABC asked some confronting questions submitted anonymously by curious viewers.

The group, which ranged in age, discussed sex between men, gay stereotypes and opened up about what it was like coming out to family.

The first question was whether they considered themselves a ‘fruity’ kid while they were at school.

About half of the group agreed they were, with one saying they were particularly fond of the Spice Girls, which attracted some early attention.

‘I was looking for my Spice Girls posters and my father took me into my room and said this was not meant for boys,’ Theo from Melbourne said.

‘And meanwhile my brothers are playing basketball in the background.’

Api (pictured) said he considered himself a ‘fruity kid’ and drew a lot of attention because he always had a ‘high-pitched, meek little voice’

‘I was a very a fruity kid I was obsessed with heels and I used to walk around on my tippy toes,’ Api from Sydney said.

‘Once my grandfather just grabbed my little four-year-old ankle and gently places them down and said’ walk like this’.

But the other half said either grew up being very masculine or lived in such a small town they didn’t even know what ‘fruity’ or being gay was.

‘No at at all I nothing like that I went to technical school woodwork sheet metal motorcars never in my wildest dreams did I think that I was gay,’ Shane said.

‘I grew up so isolated in a country town… I had no friends I would spend all my lunchbreaks with mum in her office,’ Josh, also from Melbourne, said.

‘Yeah there was never really a time when I was like’ yeah I’m gay ta-da ‘,’ Liam from Sydney added.

‘I don’t if I really had a label I just thought I was weirdo,’ Api said.

Jem from Brisbane said he grew up the Philippines which is ‘highly Catholic’ and they ‘weren’t allowed to talk about their feelings’.

Next the group was bluntly asked if they were ever called a ‘f **** t’ in high school with the question drawing up some emotional responses.

‘I don’t think anyone knew I was gay in high school,’ Brad from Sydney said.

‘I was called a that lot, constantly,’ Api said.

Theo revealed he had had a particularly unpleasant experience with the word. 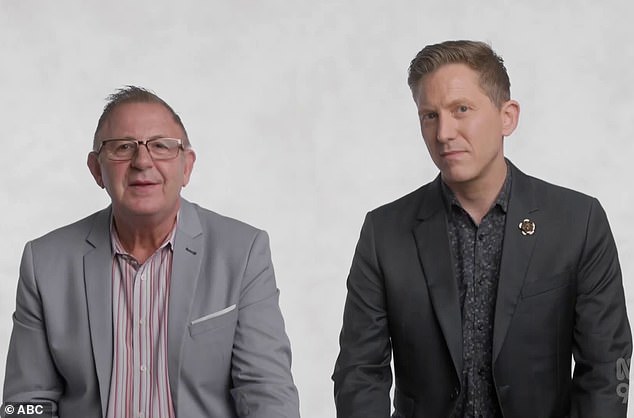 Shane (left) said he was always a very masculine kid growing up but felt he was different when he had a ‘weird feeling’ about a boy he beat in a running race. While Brad (right) from Sydney said all his friends would be out playing rugby but he ‘didn’t want to be out in the mud’

‘I know there is a lot of people out there that have reclaimed that word but that still hits me really hard.’

‘The next day at school was really hard,’ he added with a tear in his eye.

There were a lot of lighter moments throughout the interview, however, with the group being asked if ‘once you turn gay do you automatically like leather chaps and Kylie Minogue?’

‘Well you only like Kylie Minogue if you have taste,’ Api grinned.

‘F *** no I can’t stand Kylie Minogue I’m probably the only gay on the planet that’s saying this,’ Theo said.

The men were also asked very direct questions about sex and they did not hold back, giving viewers candid responses and explaining in detail how they don’t ‘find it gross at all’.

The group were then asked about the ‘gay voice’.

Most said they were unaware if they had a ‘gay voice’ but admitted there had been many times where they had had to change their voice – make it slighter depper – just to feel a bit safer. 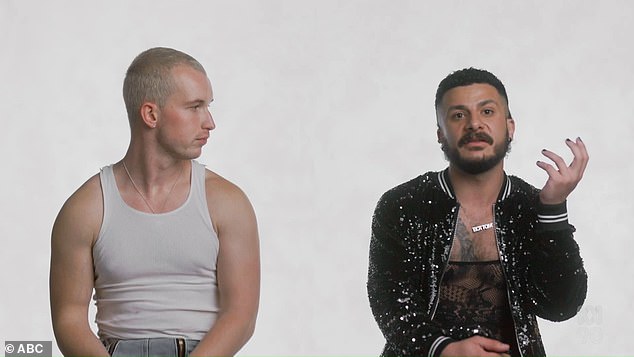 ‘I used to go through life thinking that was my problem. I really believed I had to tone it down. Dress straight. Be a really f ** king boring straight person, ‘Theo (pictured right) said

‘I used to go through life thinking that was my problem. I really believed I had to tone it down. Dress straight. Be a really f ** king boring straight person, ‘Theo said.

When asked their thoughts on the same sex marriage and similar issues, the group agreed society had come a long way but still had a long way to go.

They said they were speaking out because in forums like this to be ‘leaders’ to closeted or embarrassed young gay people.

‘As much as we’ve been making these progressive footholds we’re still facing a lot of resistance,’ Api said.

‘It’s a quieter resistance but it’s there.’

The segment ended with the group being asked if they were worried about being lonely and childless.

Some said they were worried about being alone, with Api admitting it was his biggest fear.

While others said they didn’t as they were in long-term committed relationships.

‘At this stage I’m happy to just finally live life as me,’ Joel Wilson said.