Donald Trump suggested convicted drug dealers should get the death penalty during a somber-toned speech in Las Vegas on Friday night.

Speaking with his hands clenched firmly on the podium, the former president called the United States a ‘failing nation,’ citing rising crime rates in big cities and a surge of migrants at the southern border.

During the speech he also revealed his former lawyer Rudy Giuliani – who was recently subpoenaed in a Georgia election fraud investigation – was in the hospital with a ‘heart problem’ but ‘getting well.’

‘To put it simply, we are a nation in decline. We are a failing nation,’ Trump said.

‘Our country has been knocked to its knees, humiliated before the world, yet we presume to lecture other people in other countries on their democracies.’

He followed with a statement that appeared at first to tease a 2024 bid – but instead was a suggestion to lower crime rates by executing people who get caught selling illicit drugs.

‘So this is a little controversial. And I will either get a standing ovation – and I don’t care about the ovation, I care about the country – or people are going to walk out of the room for what I’m about to say. But it’s finally time to say it,’ the former president said.

‘If you look at countries throughout the world…The only ones that don’t have a drug problem are those that institute the death penalty for drug dealers.’

He added, ‘They’re the only ones they don’t have any problem.’

‘We just want to have, it’s very simple, a great country again. And we have to have a safe country.’

Describing what he believes is the toll of rising crime in unusually dark detail, Trump claimed Democrat-run cities were full of rape and murder crimes. He was also quick to blame President Joe Biden’s policies for fueling the wave of violence.

The blood of these victims is almost exclusively in these Democrat strongholds. Babies are being killed, elderly women are being shot in the face and being raped,’ Trump said. 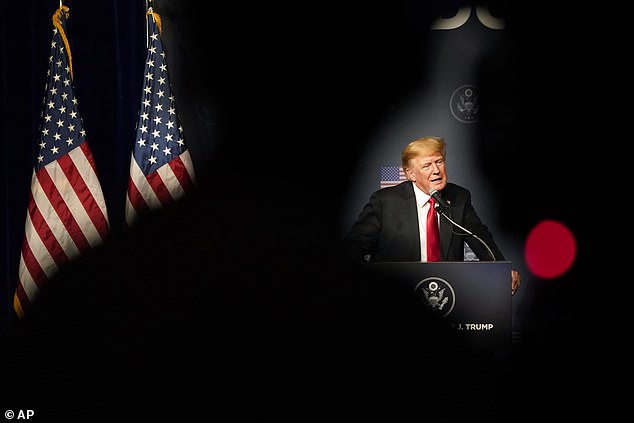 ‘Elderly women are being raped. Children are being stabbed and disfigured. As a candidate, Joe Biden helped lead his party’s vile campaign against our police officers, and then he carried the rioters’ agenda straight into the White House.’

Trump opened his rally with a video montage that began with clips that falsely suggested defunding the police is a goal for mainstream national Democrats.

It ends with hopeful, cinematic music and Trump promising: ‘We will succeed.’

But his rally appearance got off to an awkward start as the former president began with a tribute to recently assassinated ex-Japanese Prime Minister Shinzo Abe – but was drowned out by his intro song, Lee Greenwood’s ‘God Bless the USA.’

Republicans see Nevada as rife with vulnerable blue seats that they can flip in the upcoming midterms.

Trump is in Las Vegas to campaign for Adam Laxalt, the former Nevada Attorney General who is now running to unseat Democrat Senator Catherine Cortez Masto in November.

Both races are considered toss-ups. Lombardo is narrowly trailing Sisolak by just over two points in FiveThirtyEight’s polling average.

Trump is immediately following his Las Vegas speech with a Save America rally in Alaska on Saturday. 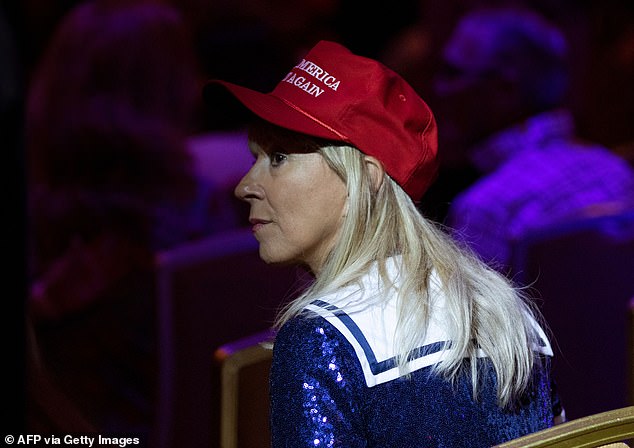 It’s the former president’s first of two back-to-back rallies this weekend. He is speaking in Alaska on Saturday 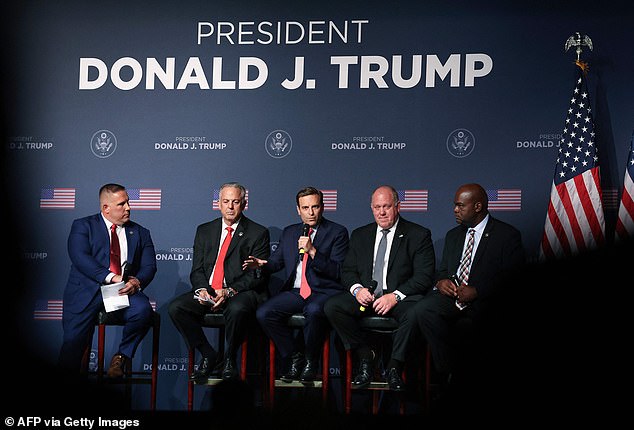 While Palin is running to fill the seat of late longtime Rep. Don Young, who died this year, Tshibaka is looking to take down incumbent Senator Lisa Murkowski.

Murkowski is a fellow Republican who infuriated Trump by voting to convict him in his second impeachment trial.

The high-profile primary race will take place on August 16.

Trump’s back-to-back campaign appearances come on the heels of multiple reports that he’s looking to announce another presidential bid soon, as the House of Representatives’ January 6 investigation committee closes in on his current and former allies.

And in yet another hint that the former president wants to run for the White House in 2024, he announced on Wednesday night that his iconic ‘Trump Force One’ plane is back in service after being almost unused since he took office in 2017.

The Boeing 757 jet was Trump’s preferred method of transportation during his 2016 presidential campaign.