Rail operators across Britain are being forced to cancel services over the coming days due to staff shortages amid ‘continued increased levels’ of sickness – as hospital admissions for Covid-19 patients continue to increase.

TransPennine Express, which runs trains across the North of England and Scotland, has urged passengers to think ‘is my journey necessary’ and to allow extra time this weekend because ‘delays and short-notice cancellations are likely’. Sources confirmed to MailOnline that this was ‘due to sickness in general including Covid’.

Avanti West Coast – which operates between London, Birmingham, Manchester and Glasgow – has warned that services may be canceled at short notice this weekend due to staff shortages, with trains expected to be busy.

Bus networks are also being affected, with Stagecoach reporting a ‘national staff shortage’ – and cancellations confirmed this morning due to illness in the likes of Lancaster, Stroud, Guildford, Basingstoke and Chichester.

It comes as data showed admissions to intensive care units in England of people testing positive for Covid-19 have risen for the second week in a row and are now at levels last seen in mid-April. Total hospital admissions are also continuing to rise, with patient levels nearing the peak reached during the previous wave of infections in spring.

The warnings about travel disruption will bring back memories of the mass cancellations on rail networks over the Christmas period as huge numbers of staff fell ill with Covid-19 and operators brought in reduced timetables. 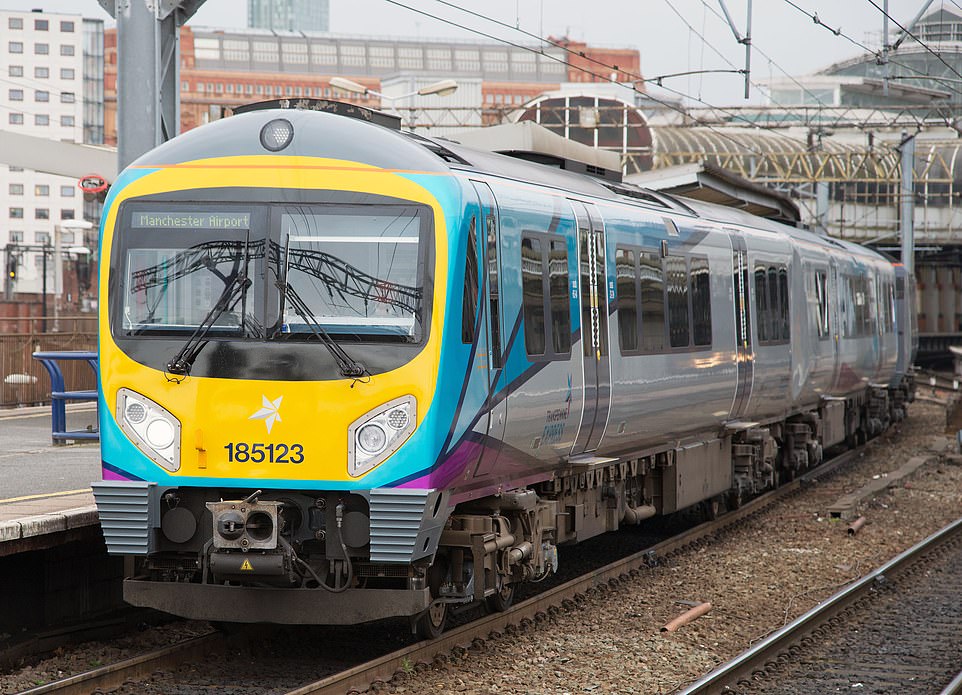 TransPennine Express, which runs trains across the North of England and Scotland, has urged passengers to think ‘is my journey necessary’ and to allow extra time this weekend because ‘delays and short-notice cancellations are likely’ 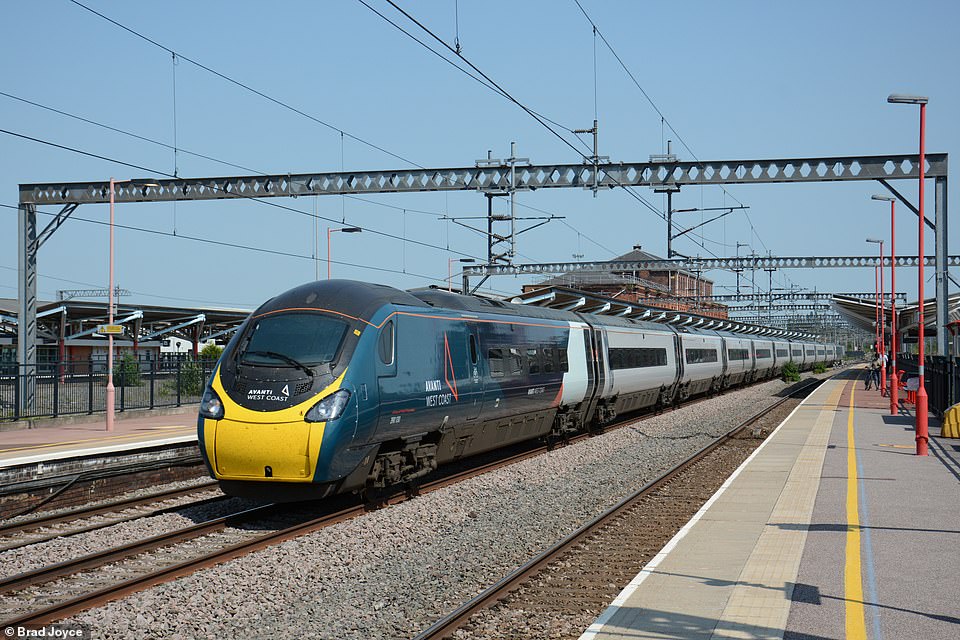 Avanti West Coast – which operates between London, Birmingham, Manchester and Glasgow – has warned services may be canceled at short notice this weekend due to staff shortages, with trains expected to be busy

TransPennine Express operates a variety of services across northern England from Manchester, which runs to Cleethorpes via Sheffield; Hull via Leeds; Scarborough via York; and Edinburgh and Glasgow via Preston. But this weekend it said it will be running a reduced service ‘due to continued increased levels of staff sickness’.

A TransPennine Express spokesman said: ‘Customers making essential journeys on these days are asked to plan ahead, check carefully before traveling and allow extra time, as delays and short-notice cancellations are likely.’

More rail workers vote to strike over pay and jobs

More railway workers have voted to strike in the bitter dispute over pay, jobs and conditions, increasing the threat of travel disruption this summer.

Members of the Rail, Maritime and Transport (RMT) union at Govia Thameslink Railway (GTR) were originally voted as part of the national rail dispute along with 13 other train operating companies in May.

Despite voting yes, there were insufficient numbers to allow them to legally take part in the three days of strike action last month. A new ballot showed an 80 percent vote in favor of strikes on a 57.5 percent turnout, which meets the legal threshold. The RMT said more than 2,000 GTR staff will now take part in any future strikes.

RMT general secretary Mick Lynch: ‘This fantastic result is a credit to our elected officials and lay activists who worked around the clock to deliver this emphatic result. Our members were denied their democratic right to strike due to draconian ballot thresholds, but having smashed through those at the second time of asking, they are raring to join our campaign.

‘GTR staff are now able to join our fight and have a legal mandate to take action in the future, to get a negotiated settlement on pay, job security and working conditions.

We will continue our negotiations next week with Network Rail and the train operating companies with a view to getting our members a fair deal. We cannot rule out further strikes and we are focused on winning this dispute and coming to an agreement with rail bosses that gives our members what they need.’

Mr Lynch said he welcomed Aslef and TSSA voting their members for strike action in the same dispute, adding: ‘If rail unions stay united in our common struggle for pay justice, job security and decent working conditions, we cannot and will not be defeated. ‘

GTR runs Southern, Thameslink, Great Northern and Gatwick Express services. Angie Doll, Chief Operating Officer at Govia Thameslink Railway said: ‘While we are disappointed that passengers may now face more disruption, our focus remains on encouraging the RMT to work with the industry to seek a swift resolution.’

A Department for Transport spokesperson said: ‘Our railway is in desperate need of modernization to make it work better for passengers and be financially sustainable for the long term. The only thing more strikes will do, however, is wreak further havoc on the very people unions claim to stand up for. We urge unions to reconsider and work with their employers, not against them, to agree a new way forward.’

Separately, Network Rail engineering work is also taking place on weekends until July 31 between Manchester Victoria and Stalybridge and on the Hope Valley line between Manchester and Sheffield, which will also cause significant journey changes.

TransPennine Express added: ‘A number of large-scale events including the Women’s Euros, Newsam Park Open Air Festival and Rugby League fixtures are taking place this weekend, and anyone heading to an event is asked to seek alternative methods of travel’.

Kathryn O’Brien, customer service and operations director for the operator, said: ‘We are sorry to say that we are expecting further disruption to our services this weekend due to continuing high levels of staff sickness.

As a result of these challenges, we’re asking customers to only travel if necessary on Saturday and Sunday, and to plan ahead and check before they travel as well as allowing additional time, as services are expected to be really busy and further delays and cancellations likely.

‘People traveling to one of the major events taking place across our network are asked to seek alternative methods of transport.’

TransPennine Express added that anyone making a journey this weekend is strongly advised to check their train before they travel, and that bicycles will not be allowed onboard any of its services this weekend.

Avanti tweeted today: ‘Due to ongoing staff shortages, some of our services may be canceled at short notice. We’re sorry if this affects your journey, please check your train on the day of travel.’

The operator added: ‘We’re doing all we can to keep our services running, but some may be canceled at short notice because of staff shortages, particularly at weekends. We’ll let you know as soon as possible about any changes, but please check before you travel. If your train is cancelled, you can use your ticket on the Avanti West Coast service before or after.’

Avanti added that trains are ‘expected to be busy – particularly on shorter journeys’.

It comes as health experts have warned the number of hospital admissions for Covid-19 are likely to carry on rising throughout July, driven by a ‘substantial amount’ of waning immunity among older people.

The figures on admissions are the latest evidence of how the virus is becoming more prevalent, with the potential to add further pressure on hospital staff already trying to clear a record backlog of operations.

The current wave is being driven by the variants Omicron BA.4 and BA.5, which are now the dominant strains of Covid-19 in the UK and are more transmissible than the BA.2 variant that caused infection levels to reach an all- time high earlier in the year.

The rate of hospital admissions in England of people testing positive for Covid-19 stood at 14.6 per 100,000 last week, up from 11.1 the previous week, according to the UK Health Security Agency (UKHSA). 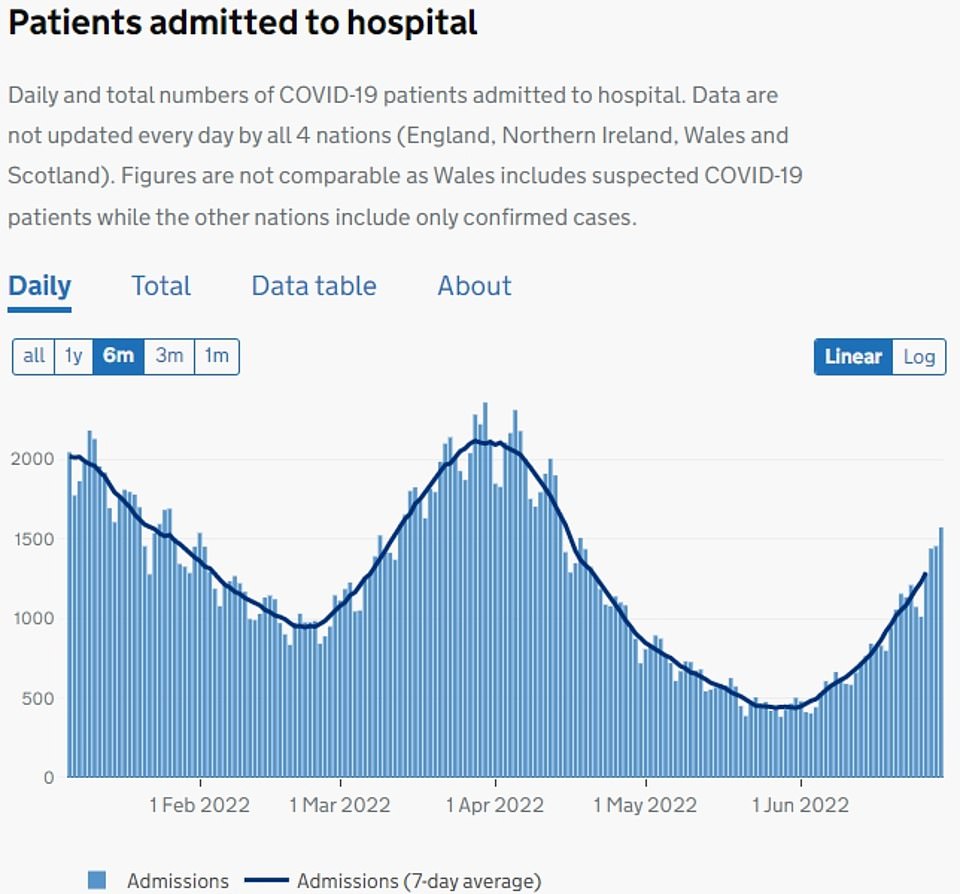 Total hospital admissions for people with Covid-19 are rising, with patient levels nearing the peak reached during the spring

All over-75s in the UK have been offered a ‘spring booster’, available at least three months after their most recent jab, to ensure they continue to receive the maximum possible protection.

The total number of people in hospital in England who have tested positive for Covid-19 currently stands at 11,878, up 33 percent week-on-week. Patient numbers are now around three-quarters of the peak reached during the BA.2 wave, although they remain well below the levels seen in the early part of the pandemic.

Around six in 10 patients who test positive for Covid are being treated primarily for something else rather than the virus, but still need to be kept isolated from other patients, putting extra pressure on hospital staff and resources.