Thomas Jefferson’s famous Monticello mansion has been accused of bombarding visitors with endless and over the top references to the Declaration of Independence author’s history as a slave owner.

The reactions come after a ten-year effort to overhaul the exhibits at the Virginia estate and provide a more balanced view of the third US president who wrote: ‘We hold these truths to be self-evident, that all men are created equal’ in 1776, still owned slaves until his dying day in 1826.

‘The whole thing has the feeling of propaganda and manipulation,’ founder of the libertarian Brownstone Institute Jeffrey Tucker told The New York Post after a recent visit, ‘People on my tour seemed sad and demoralized.’

Recent visitors have described a deluge of exhibits and signs that criticize Jefferson, and even employees who go out of their way to ‘besmirch’ him.

Some visitors however have argued that the changes are not enough, with one visitor labeling the slavery exhibit specifically as ‘benevolent slaveholder bs’ 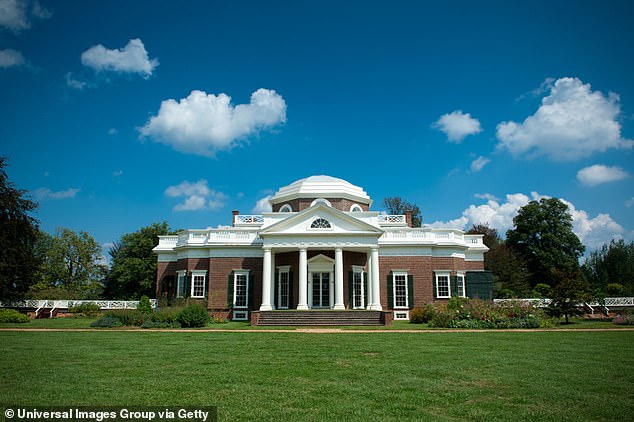 Recent visitors have described a deluge of exhibits and signs that criticize Jefferson, and even employees who go out of their way to ‘besmirch’ him 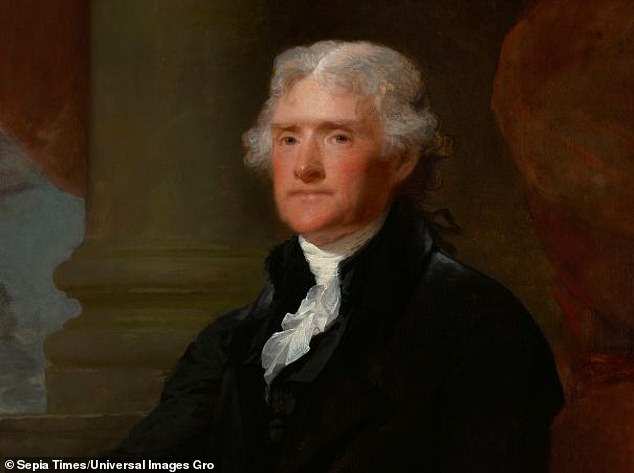 Some visitors however have argued that the changes are not enough, with one visitor labeling the slavery exhibit specifically as ‘benevolent slaveholder bs’

In the decades since Monticello opened to the public in 1923, the attention given to Jefferson’s slaves was few, mostly consisting of cursory references to the quarters and cabins where they lived on the estate.

But Jefferson’s legacy as a slaveholder has come under increased scrutiny in recent years.

Last year his statue was removed from the New York City Council’s chamber, with the exhibits at Monticello also enjoying an overhaul intended to address Jefferson’s enthusiasm for owning slaves head-on.

He began building Monticello in 1794, and continued working on the property until his death in 1826.

‘Our goal is to present an honest, inclusive history of Monticello in all its aspects as well as Jefferson’s contributions to the founding of the country,’ a Monticello spokesperson Jenn Lyon told The Post.

But another visitor, Debi Jansen, suggested that the tour was not enough

The current tour of Monticello begins with a reference to the Native Americans who once lived on the land, and a ticket booth adorned with a painting of the president’s slaves in tears.

Throughout the building, signs pointing out household positions continuously refer to them with the moniker ‘enslaved’ before them, according to The Post, while trigger warnings abound and signage asks questions that provide their own answers.

‘Is ‘all men are created equal’ being lived up to in our country today?’ a sign hung on the patio outside the snack shops reads, ‘When will we know when it is?’

And the centerpiece of the house – the octagonal music room that was meticulously restored to look like Jefferson’s exact decorative specifications – a portrait of a black man with his face marred out hangs front and center.

The man’s ‘hands and face of featureless tar’ are meant to represent ‘the faceless lives of all who served in bondage, witnessing but never recognized,’ the painting’s placard reads.

Former Virginia governor and senator George Allen characterized the new Monticello as a ‘contemporary politicization of a beautiful historic property.’

‘Some of this to me just detracts from how people can be inspired and understand Thomas Jefferson and his time and how brilliant he was, how creative he was, his innovations and how ahead of his time he was.’

And Douglas McKinnon, author of The 56: Liberty Lessons From Those Who Risked All to Sign The Declaration of Independence, said the exhibit’s view of history is clearly warped through the lens of contemporary politics.

‘It’s very problematic to look at 1776 and Thomas Jefferson through the prism of 2022,’ MacKinnon said. ‘You can’t go back 250 years to know what was in their hearts at that time.’

Jefferson was the ultimate Founding Father of our nation. His name should not be diminished because of our political disagreements.’ 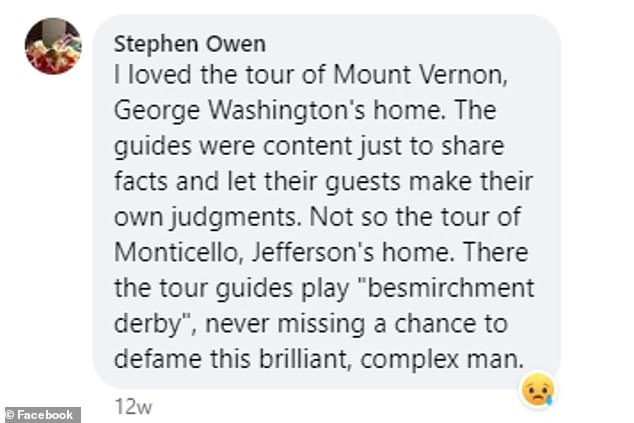 Stephen Owen said he enjoyed the tour, and had no issues with the exhibits about slavery – but said the guides themselves needed to tone down the Jefferson bashing 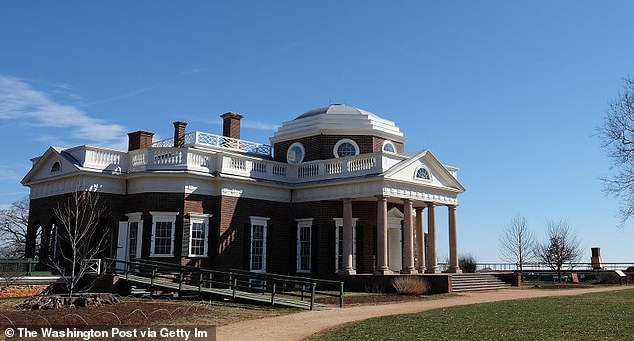 ‘Our goal is to present an honest, inclusive history of Monticello in all its aspects as well as Jefferson’s contributions to the founding of the country,’ a Monticello spokesperson Jenn Lyon told The New York Post

Visitors have also taken to the internet to express their dismay, with one Google review from Wesley Stevens, of Tulsa, Oklahoma, writing ‘They are trying to rewrite history to make it seem like the founding fathers were terrible immoral creatures that happened to start a country.’

Still, some seem to think that the new Monticello has not gone far enough.

‘The guided slavery tour was all benevolent slaveholder bs,’ wrote Debi Jasen on Facebook, ‘I thought the tour was supposed to have improved and not be so whitewashed. What an infuriating disappointment.’

Monticello took the time to respond to Jasen, writing:

We want all of our guests to have an experience that meets their expectations and to find our programs and tours engaging. Our goal is to bring the history of Jefferson and Monticello forward into the contemporary dialogue so that we can learn from this history and how it can inform our present-day issues.’