We all have days whose importance we fail to realize at the time. For me, it was June 29, 1992, when I took my place for the first time in Dictionary Corner as Countdown’s resident lexicographer – and pretended I knew what I was doing.

Alongside me was the immaculate Rula Lenska, behind whose luxuriant hair I desperately tried to hide.

The evidence of that first day – saved for ever on YouTube – shows all too clearly that, however much I longed to look poised and knowledgeable, this newbie was a bag of nerves. 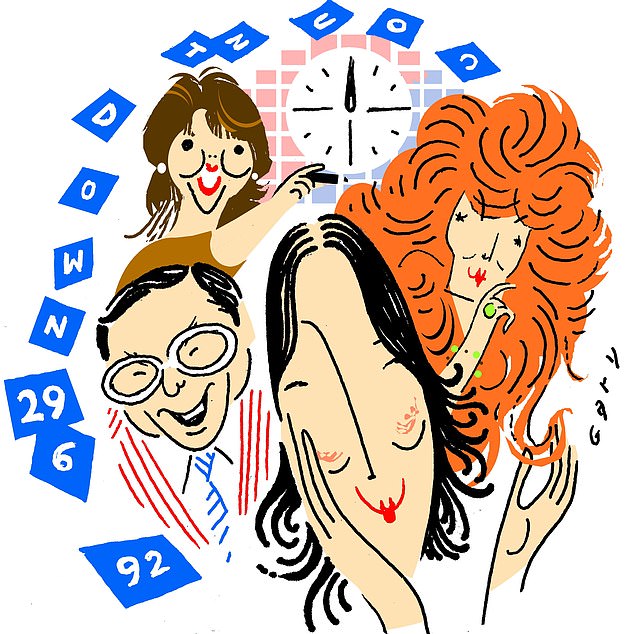 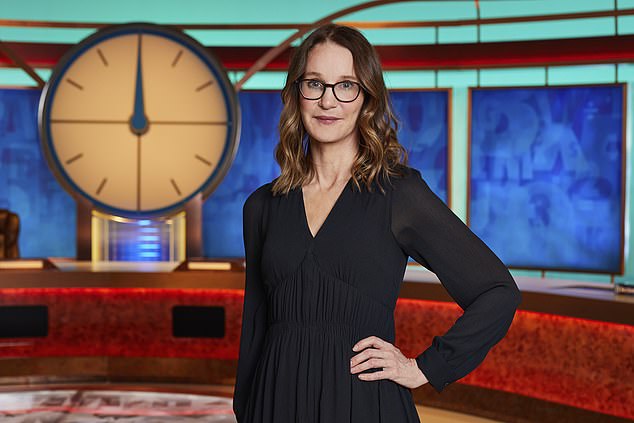 ‘If anyone had told me then I’d be occupying the same seat 30 years later, I’d have thought them utterly bonkers’

If anyone had told me then that I’d be occupying the same seat 30 years later, I’d have thought them utterly bonkers. Yet, here I am, still loving what is surely the very best gig on British television – and still feeling the adrenaline every time the clock starts ticking down.

The hosts that jittery day in 1992 were, of course, Richard Whiteley and Carol Vorderman, who, together with Cathy Hytner, had introduced the words and numbers game a decade earlier, when Countdown was the very first show to be aired on Channel 4.

‘As the countdown to a new channel ends, a new Countdown begins,’ were Richard’s opening words.

However, the show’s story had, in fact, begun long before that, with the French game show Des Chiffres Et Des Lettres (Numbers And Letters), now the longest-running TV quiz in the world. Its quiet but compelling format was spotted by a Belgian lyricist named Marcel Stellman, who had written songs for such stars as Cilla Black, The Shadows and Petula Clark. 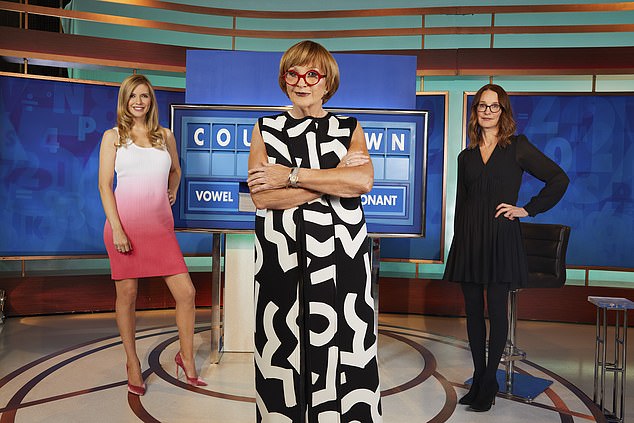 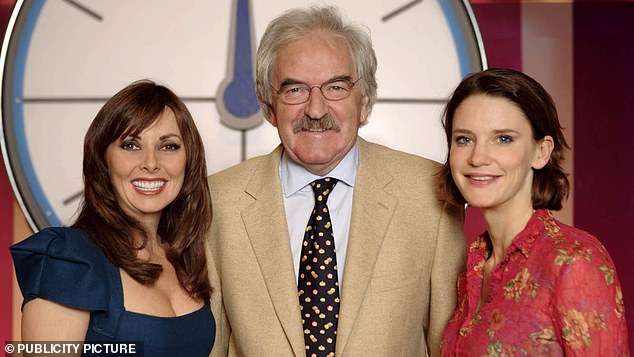 ‘As the countdown to a new channel ends, a new Countdown begins,’ were Richard’s opening words

Marcel and his wife Jean clearly also had a good eye for entertainment, for they saw the potential for the same show in Britain, and suggested the idea to Yorkshire Television. It was initially commissioned for just six weeks.

Forty years later, and nearly 8,000 shows on, we still have our patriarch Marcel, who died last year aged 96, to thank for his foresight. You’d need 12 hours a day over 13 months to watch every Countdown episode.

The pairing of Richard and Carol, who soon took over the show as a duo, was inspired. They were the perfect foils to one another, bouncing off each other’s jokes and exchanging gentle teases about everything from Richard’s garishly wonderful jackets (what a collection!) To Carol’s latest hairstyle.

They loved each other dearly, on screen and off, and that genuine warmth radiated into our homes every teatime. Vorders and Whiters became one of the greatest double-acts on British television.

Richard was most proud of being the first face on Channel 4. ‘That’s what I want to be remembered for,’ he would always say. But it was as the ‘host with the most’ that he laughedingly introduced himself, while also gratefully accepting the nickname ‘King Dick’.

Before the start of every show, he would stand in front of the studio audience and regale them with shaggy dog ​​tales and bad puns. They adored him.

When Rick Wakeman spoke emotionally about Richard a few months after he died, aged just 61, Rick quipped: ‘He’s probably still at the pearly gates having a chat.’

I’ll never forget the evening Carol called me to say that Richard had gone.

A long-time asthma sufferer, he had developed complications from pneumonia, but we were all convinced he would pull through.

He had the support and strength of his partner Kathy behind him, and life seemed unimaginable without Richard’s shoulder-shaking laugh.

His death rocked the whole Countdown family, and on the day the news broke we all spontaneously decided to go up to Leeds, Countdown’s home, so that we could be together.

Those dark days were brightened only by watching reruns of our favorite episodes, the ones in which Richard couldn’t get through a joke because he was laughing so hard, or when he would put his foot in it by totally mangling a contestant’s name or job .

On one occasion he introduced a contestant as a ‘lavatory’ rather than a ‘laboratory’ assistant, while he also turned a professional musician into a ‘professional museum’.

Best of all, though, were the times when he would fall back in his chair, arms aloft, to celebrate one of his favorite words.

Whenever ‘leotard’ comes up on the letter board, I can hear Richard’s gleeful chuckle and his explanation – for the thousandth time – that the garment was named after Monsieur Jules Léotard, a French trapeze artist. 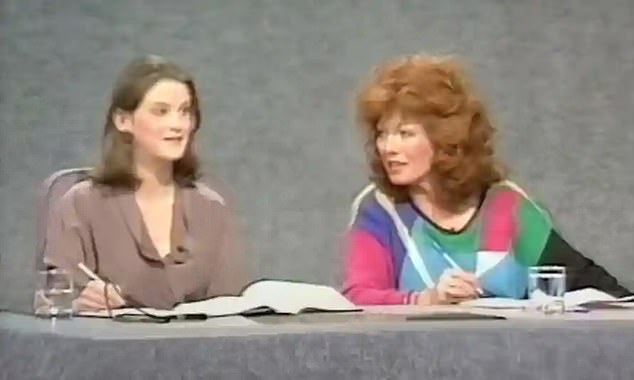 Susie Dent on Countdown in the 1990’s with Rula Lenska

Even today we are never far from Richard – each series champion has their name engraved on the Richard Whiteley Memorial Cup.

Countdown has had six hosts since Richard, and they have all brought their own magic to the show. Des Lynam gave us panache and a playful wink, while Des O’Connor was a true gent and entertainer. Jeff Stelling, always pitch perfect, brought so much laughter to the studio, and Nick Hewer injected the driest of wit as well as the ability to recite poetry at the drop of a hat.

Most recently, Anne Robinson opened up the contestants to us like never before, making them the real focus of the show. Soon, another chapter begins and we’ll have the brilliant Colin Murray back at the helm – he stepped in for Nick during the pandemic and his love of the game is utterly infectious. Every one of them is Countdown family.

But ‘family’ doesn’t even come close to expressing the importance of those invisible members of the team, many of whom have been with the show as long as me.

he camera crew, production team, directors and researchers – it is they who have made the show the juggernaut it has become. Our series producer, Damian Eadie, is even a former contestant, first appearing in 1994.

And he is with us still – the least likely Countdown leader you could ever imagine: a potty-mouthed lover of heavy metal with a brain that can produce an outrageous joke or an anagram at will.

He also knows every inch of the set, every camera shot, every conundrum ever created and every word ever played. Damian is the cornerstone of Countdown.

Countdown is nothing, of course, without the counting, and since 2009 Rachel Riley has astounded us with her mathematical genius.

For me, Rachel is also the very best of friends – strong, principled and utterly loyal. I often think she and I are two sides of the same coin. She is always impeccably groomed while I frequently have dresses on the inside out or back to the front. She lends me bras, tights – anything, in fact, that I have characteristically left at home.

Rachel always jokes that while I have swallowed the standard dictionary, she is well acquainted with the ruder, urban, one. All too often I have found myself enthusiastically explaining what to me is an entirely innocent word, only to spot Rachel doubled up with laughter because she knows another meaning.

This is not to mention the unconscious hand gestures I apparently make whenever I’m defining a word. I have somehow made ‘areola’ a speciality, making circular motions over my chest, much to the amusement of the Dictionary Corner guest.

(Even this is nothing compared to the 12 takes it took me to explain the origin of ‘cock a hoop’.)

There is a lot of giggling on the Countdown set, and not just because of my inadvertent innuendos. Rude words frequently come up on the letters board, sometimes necessitating a hasty reshuffle so we can start again.

Then there was the time Noel Edmonds played a ‘gotcha’ on Richard, planting two fake contestants in the chairs who failed to get a nine-letter word from OMETHINGS but managed to get DIARRHOEA in another round.

Our studio audience has also provided a surprise or two. Over the course of 40 years they have given us not only warmth and support, but also a couple of stink bombs (really), and even a marriage proposal.

Many of them have become good friends – Norman the vicar, Craig and his guide dog Bruce, and the late great Donna, who never quite summoned the courage to be a contestant but who would have scooped up every point if she had.

Our guests are, of course, as much a staple of Countdown as the mighty clock. Over 200 stars and entertainers have sat in Dictionary Corner over the years, from Kenneth Williams to Sir Ranulph Fiennes, Jerry Springer to Jo Brand, Barry Cryer to Stephen Fry.

It will come as no surprise to regular viewers that my friend Gyles Brandreth has been the most prolific resident, making 333 appearances, every one in a jumper as whimsical as one of Richard’s ties.

But the real star of Countdown, of course, is the game. It is so beautifully simple that everyone knows instantly how to join in.

You only have to look at the audience during 8 Out Of 10 Cats Does Countdown, a hybrid of the two shows, to see everyone laughing their heads off while still determined to crack the numbers game or find the longest word. 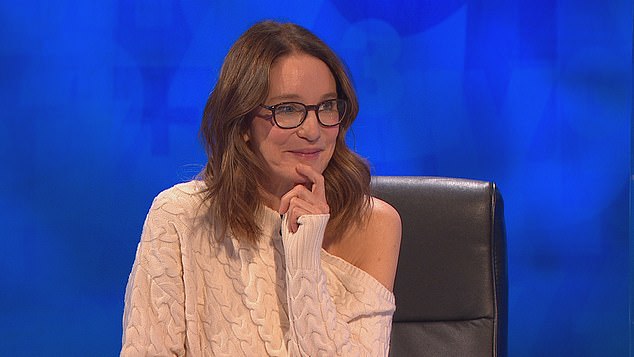 ‘Even Sean Lock, the joyously funny and much-missed team captain on Catsdown (as Rachel and I like to call it) became so hotly competitive that he would get grumpy if the host Jimmy Carr ever dared to bend the rules for a laugh’ . Pictured: Susie Dent on 8 Out of 10 Cats Does Countdown

Even Sean Lock, the joyously funny and much-missed team captain on Catsdown (as Rachel and I like to call it) became so hotly competitive that he would get grumpy if the host Jimmy Carr ever dared to bend the rules for a laugh.

It’s this addictiveness and joy that explains, I think, why Countdown is still loved by millions. The prize for any winner is not a pot of money, but a pot for tea, and the knowledge that they have become part of a TV institution.

For the audience, there is the satisfaction that the contestants – so many of them quite brilliant – have been chosen not for their telly appeal, but for their love of the game. That feels quite unique to me.

Richard Osman, Pointless star and now best-selling author, once asked me: ‘Do you ever get bored?’

That day in 1992 was fateful in so many ways. I can’t imagine my life without Countdown. I’m so thankful that, at least for 30 years, its life has included me.