Rita Ora caught the eye at the Glastonbury Festival in Somerset on Friday.

The singer, 31, turned heads in a pink bralette with floral patterns, which she teamed up with a pair of tight black vinyl trousers.

It comes after it was reported that Rita is set to tie the knot ‘imminently’ with her boyfriend Taika Waititi in a low-key ceremony after deciding they wanted to marry. 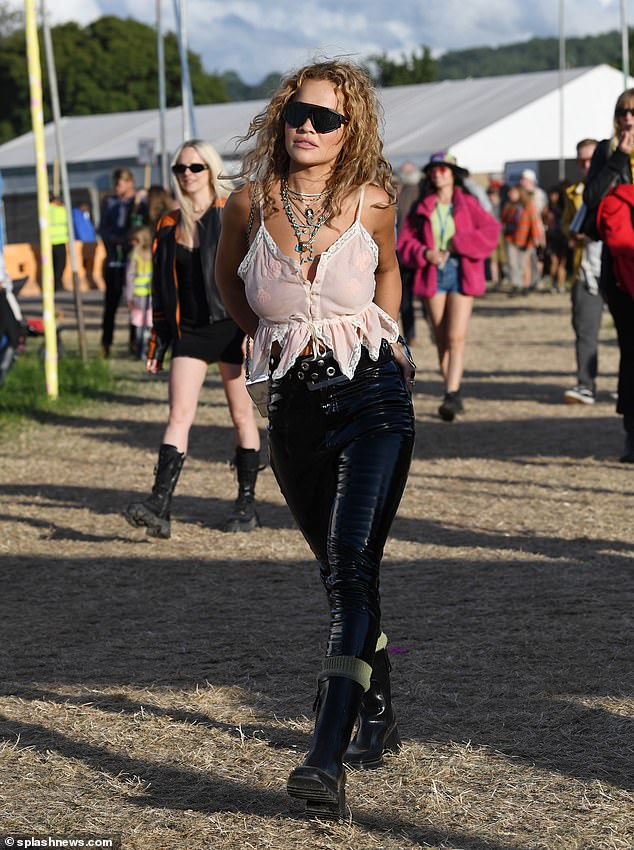 Emerging: Rita Ora turned heads in a pink bralette with floral patterns, which she teamed up with a pair of tight black vinyl trousers at Glastonbury Festival in Somerset on Friday

She accessorised with a leather belt, as well as a pair of charcoal wellington boots while framing her face with oversized sunglasses.

The Anywhere hitmaker continued her chic ensemble with a collection of jade stone necklaces and wore her blonde tresses in gorgeous curls.

She soon wrapped up in a red pilot’s bomber jacket amid the summery breeze while clutching a black baseball cap. 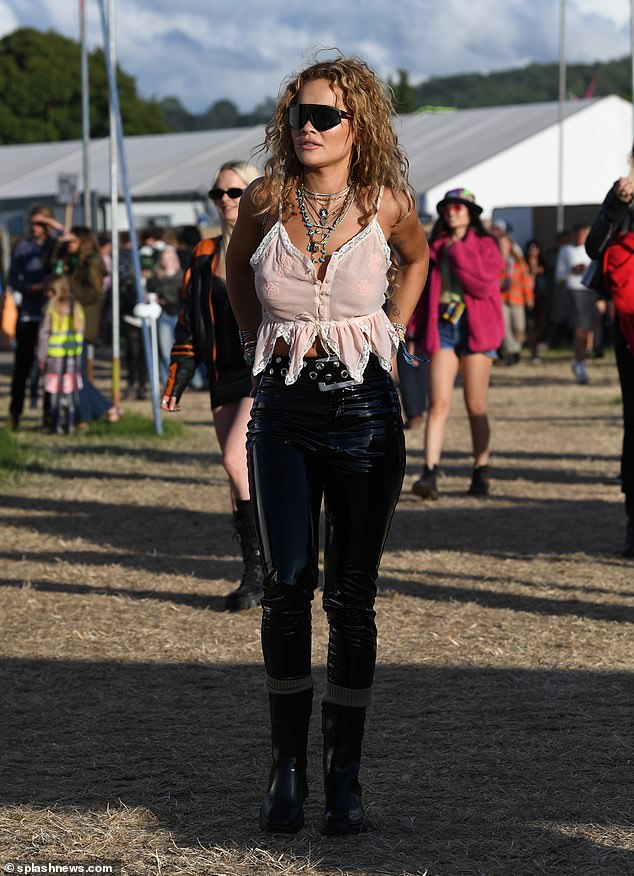 Could it be? It comes after it was reported that Rita is set to tie the knot ‘imminently’ with her boyfriend Taika Waititi in a low-key ceremony after deciding they wanted to marry 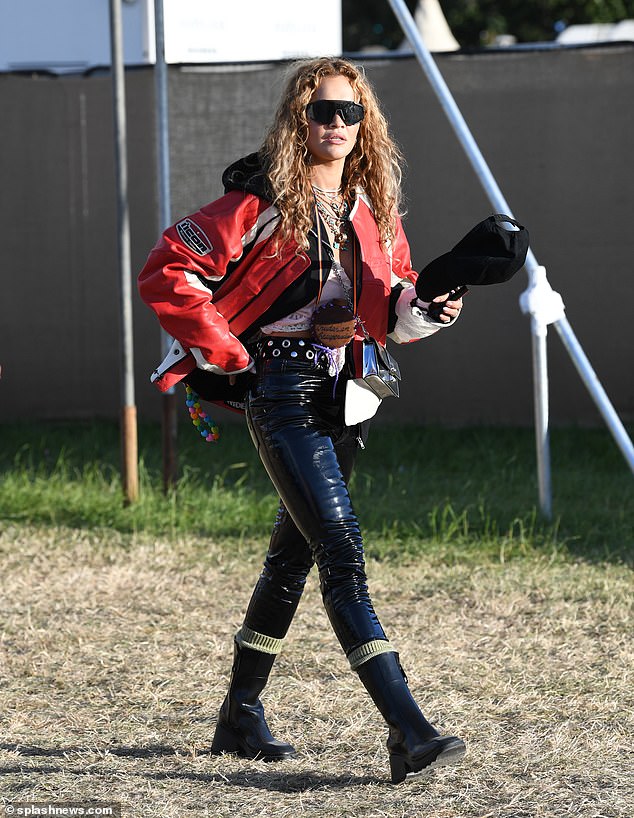 Chilly? She soon wrapped up in a red pilot’s bomber jacket amid the summery breeze while clutching a black baseball cap

It follows reports that Rita and Taika were engaged and planning an imminent, low-key ceremony abroad before celebrating with their fellow A-listers in a big London bash later this year.

It is understood that Rita, who is working on several films and The Voice Australia, and Taika, who is planning a string of movies, hope to tie the knot once their work commitments have wrapped up.

A friend told The Sun: ‘This isn’t about them doing a big showy thing and crowing about it beforehand. It’s just about them being in love and deciding the time is right to formalize their relationship. They couldn’t be happier.

Chic: She later landed in a helicopter at Battersea Heliport wearing a funky leopard print coat. The hitmaker kept comfy in a black silk pyjama set which she styled with Hunter boots 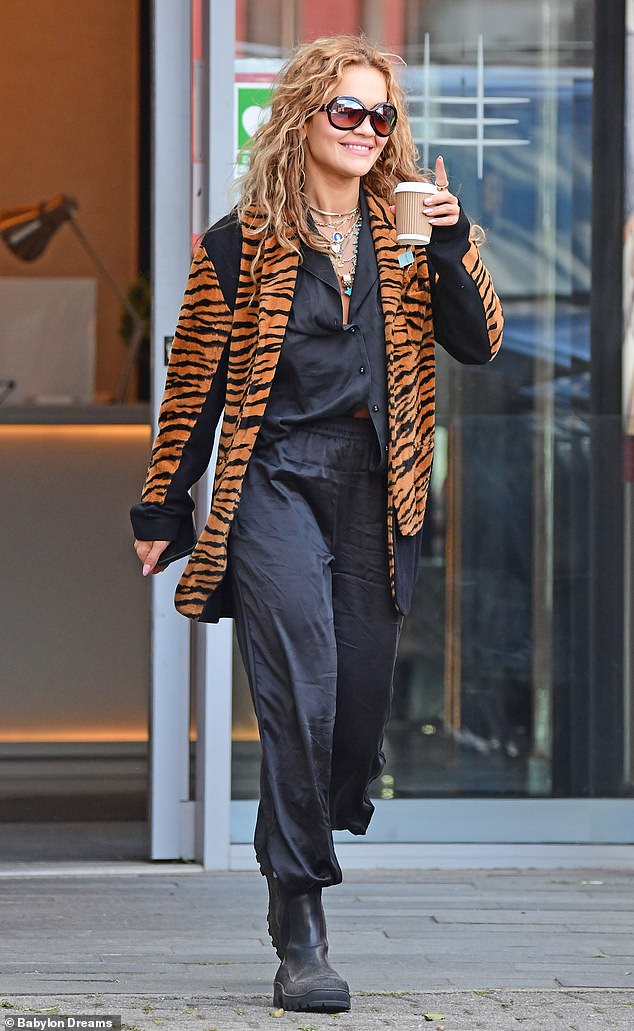 Stunning: The former X Factor judge framed her face with a pair of oversized sunglasses

Thirsty: She clutched a paper coffee cup, along with a multi-colored bracelet. The Anywhere songstress continued her chic ensemble with a collection of jade stone necklaces 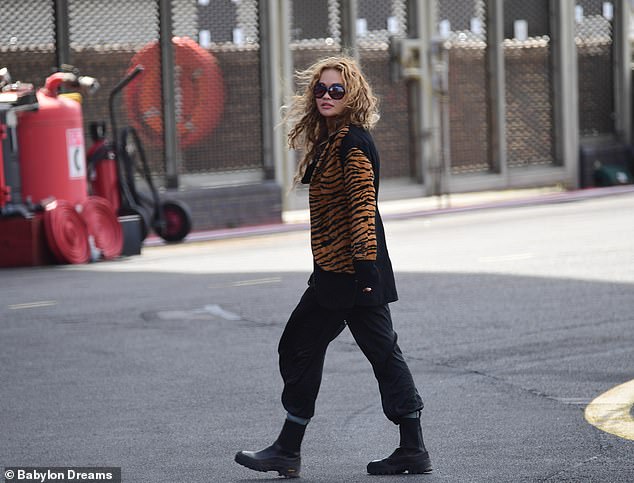 Beauty: Rita wore her blonde tresses in gorgeous curls, which blew in the wind

‘There’s no ring or big build-up. They just got closer and closer and eventually said to each other almost simultaneously, “I want to marry you.”

The pal added that there are ‘a few details to iron out’ but the nuptials are ‘coming soon’.

MailOnline contacted representatives for Rita and Taika for comment at the time. 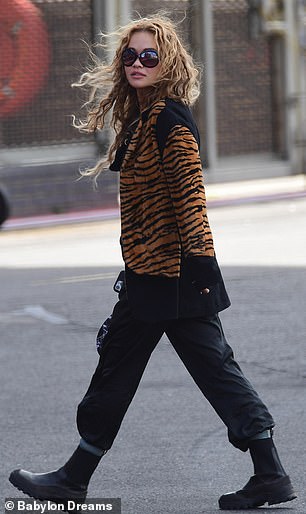 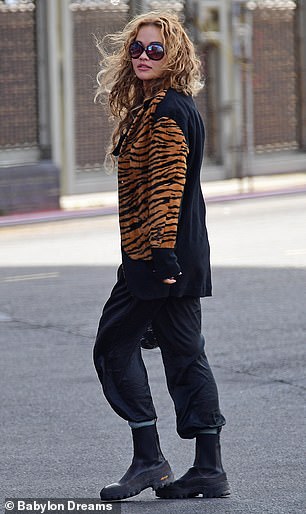 Stylish: Rita looked like a supermodel as she strutted through the heliport 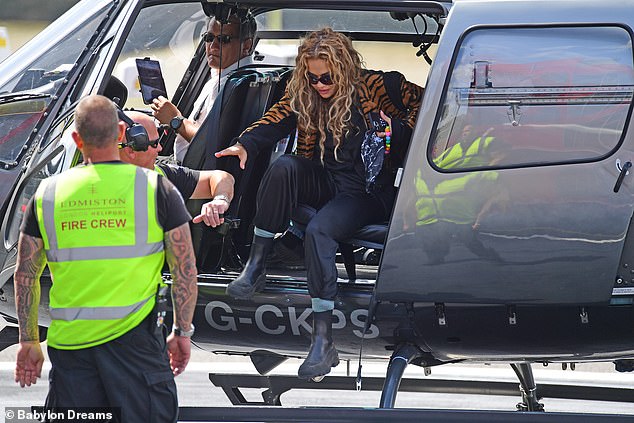 Hello! Rita was greeted by fire crew in high-vis jackets as she stepped onto the tarmac 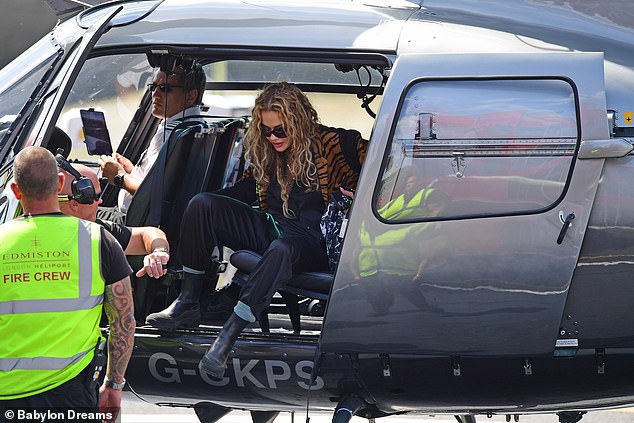 Looking good: The Masked Singer judge appeared to be in high spirits 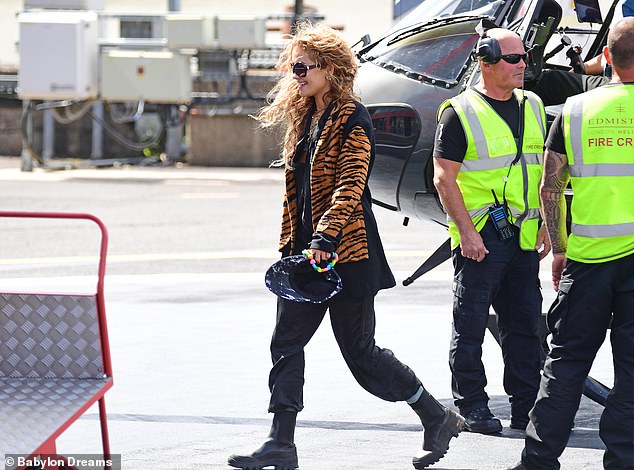 Happy: She beamed from ear-to-ear while making her way away from the chopper

In August, the couple, who began dating in March 2021 after meeting in Australia, were said to be moving so fast in their relationship they started discussing marriage, a source told New Idea.

‘Taika calls Rita’ wifey ‘all the time and chats about how she’s going to be her first and last husband,’ the insider said.

‘Everyone around them downplays it as a flirty banter, but [Rita is] definitely hoping he’s for real, ‘they continued, adding that she is’ absolutely obsessed’ with her Thor director beau. 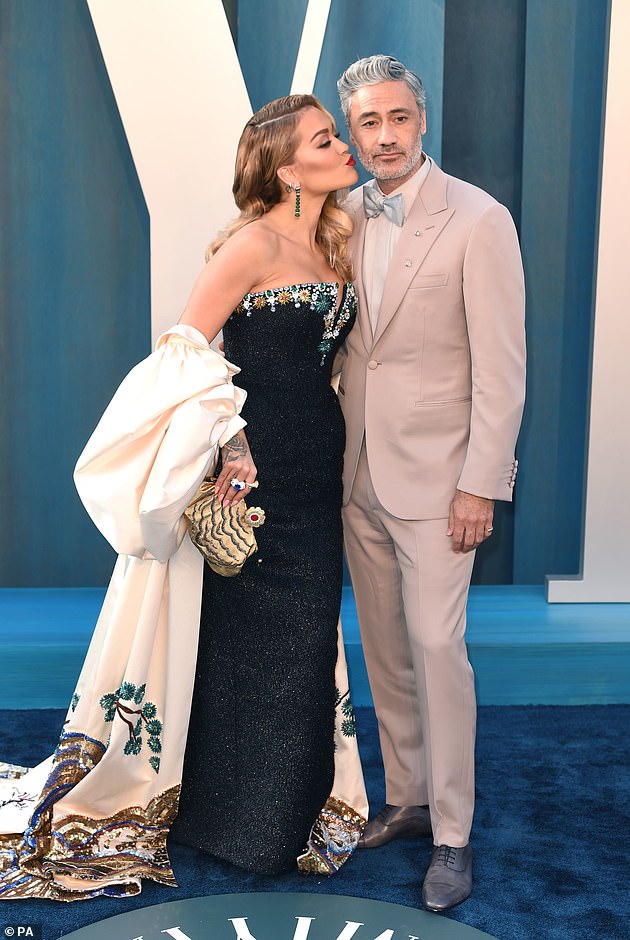 Wedding bells: Rita and Taika are reportedly set to wed one another after almost simultaneously popping the question (pictured in March 2022)

At the time, Rita had reportedly started joking about getting married in a ‘quick, hippy-dippy’ Californian ceremony, and then celebrating with a bigger party at a later date.

Taika was previously married to film producer Chelsea Winstanley, but the pair are believed to have quietly split in 2018.

Before either of them shot to fame Rita dated Bruno Mars at the age of 18, later saying: ‘It was love at first sight.’

‘He was a struggling songwriter hired to write songs for me. I thought: “Wow, that’s just the world’s greatest guy!” ‘

The singer dated reality star Rob for two months from October 2012 before ending their brief romance due to her ‘hectic work schedule’ and their incompatible lifestyles.

And she admits to forgetting she even dated the sock designer because the fleeting relationship was ‘very short-lived’.

The end of their brief romance coincided with a series of bitter social medial posts from Rob, who indirectly suggested the singer had cheated on him numerous times during their relationship.

Calvin and Rita were linked in Spring 2013 with the pair dating for about a year.

The DJ and Rita had a romantic and professional relationship, collaborating on Rita’s number one smash hit I Will Never Let You Down.

Rita is said to have been left rather red-faced after learning that her relationship was over via Twitter.

The Scottish DJ took to the social networking site to announce the couple’s year-long romance was over, but it was claimed the I Will Never Let You Down hitmaker was unaware her beau was going to release the statement.

Rita and Tommy Hilfiger’s son, Ricky Hil, confirmed their relationship in August 2014, only to split after 14 months of the on / off romance.

Rocky had a fling with Rita in 2015. The rapper later sparked controversy when he included explicit lyrics about his rumoured ex in his single Better Things.

ASAP – whose real name is Rakim Mayers – later admitted his comments about Rita were ‘tasteless’.

Rita had a month-long fling with Kourtney Kardashian’s now husband in the Autumn of 2015. It’s rumored that Travis put the breaks on the romance due to not wanting to be in a ‘serious relationship’.

Rita enjoyed a year-long romance with fellow musician Andrew in 2016, before splitting, with the star revealing her single status during an appearance on the Jonathan Ross Show.

The singer and the Hollywood actor had a steamy four month fling before Andrew called time on their fling for a ‘more private life’, with Rita returning to Watt for a brief reconciliation after the Garfield split.

The couple began dating in March 2021 after meeting in Australia, ands were said to be moving so fast in their relationship they started discussing marriage within months, a source told New Idea.