Public support for the rail strikes is increasing, with almost half of Brits now in favor of the walkouts, according to a poll out today.

A new Opinium survey for Good Morning Britain found 45 per cent of people supporting the industrial action, compared to 37 per cent who are opposed.

This is a direct reversal of the situation at the start of the rail strikes last week, when 37 per cent backed the strikes and 45 per cent were opposed.

Other polls have found more people disagreeing with the strikes than supporting them – although some people took to social media to welcome the rail walkouts as a chance to WFH as the nation was brought to a standstill in ‘lockdown 2.0 ′.

More than 50,000 RMT union members walked out last week over demands for a 7 per cent pay rise, causing hell for commuters in a £ 100million-plus hammer blow to the already creaking economy.

It comes as Britain braces for a ‘Summer of Discontent’, with the RMT warning rail strikes could continue until September, and walkouts by Post Office workers and British Airways set for July. 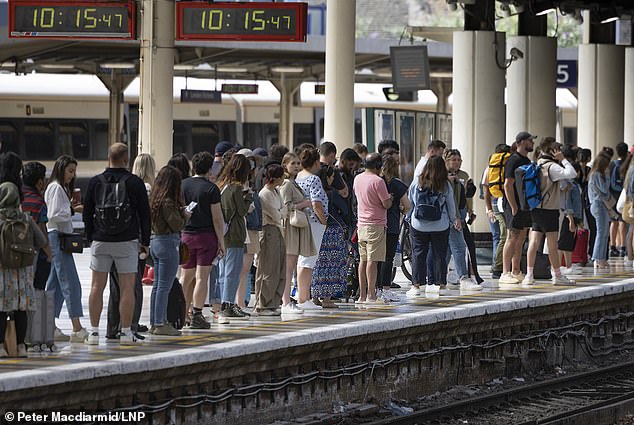 An Opinium survey for Good Morning Britain found 45 per cent of people now support the rail walkouts, compared to 37 per cent who are opposed

Postal workers started voting today on whether to strike in a dispute over pay, with around 115,000 members of the Communication Workers Union (CWU) receiving ballot papers.

There could also be walkouts by teachers, binmen, and NHS doctors – who are demanding a whopping 30 per cent pay rise over the next five years.

Barristers also joined the picket line yesterday, with the Criminal Bar Association claiming they were the ‘poor persons’ of the legal system.

It came as union barons were mocked as it emerged nearly a quarter of the rail staff defied them by turning up for work during one strike last week.

Figures seen by the Daily Mail show 29 per cent of Network Rail track workers and 18 per cent of operations staff, mostly signallers, clocked in on Thursday – or 24 per cent overall.

More than one in five (21 per cent) clocked in last Tuesday, the first strike day, including 24 per cent of track workers. Around a fifth clocked in across three days of walkouts.

NHS doctors and GPs will push for a whopping 30 per cent pay rise. .

Members of the British Medical Association (BMA) have asked their union to lobby ministers for a massive pay hike over the next five years. They believe doctors have been shortchanged by ‘millions’ in real terms since 2008 due to inflation.

Doctors said they were prepared to join ‘picket lines’ to achieve pay restoration and admitted that industrial action was ‘likely’.

Members voted in favor of the motion at the BMA’s annual meeting in Brighton yesterday. The union will now be mandated to push for the salary increase for all doctors, including GPs who make £ 100,000 per year, on average.

So far ministers have ruled out bowing to unions on pay, arguing that broad salary rises would only add fuel to Britain’s spiraling inflation.

The Treasury has told public sector workers they should instead expect rises around the 3 per cent mark.

It undermines claims by the militant RMT union’s boss, Mick Lynch, that turnout at picket lines was ‘fantastic and exceeded expectations’.

Andrew Haines, Network Rail chief executive, said: ‘About 20 per cent of people in grades represented by the RMT turned up for work… which we think is quite remarkable.

Chaos was largely avoided last week thanks in part to the number who turned up for work, with as many as half of the trains running on key inter-city routes such as the East Coast and West Coast main lines, which connect London with cities in the north and midlands.

It helped people attend a bumper weekend of gigs, Armed Forces Day and a cricket test match in Leeds without their journeys descending into complete carnage.

It will pile pressure on RMT negotiators to accept a deal in a bitter dispute over pay and jobs as more workers are expected to break ranks the longer walkouts drag on. This is because workers lose a day’s pay when striking.

The dispute also includes 13 train operators covering most of the country. Around 40,000 RMT workers in total walked out on Tuesday, Thursday and Saturday last week.

The militant union has suspected more strikes if its demands are not met.

It could announce more dates later this week but has to give two weeks’ notice, meaning strikes in the week beginning July 11 are possible.

But the Mail revealed last week how it may team up with the TSSA rail union by announcing strikes towards the end of July to coincide with the school holidays, inflicting maximum damage.

The RMT wants a pay rise for workers of about seven per cent and a guarantee of no compulsory redundancies.

Network Rail has officially offered a package worth three per cent but has informally promised higher if the union accepts further modernization of working practices, such as the use of technology to detect faults on tracks.

Rail sources said the financial damage done to the industry by last week’s strikes had exceeded £ 100million – enough to afford a 5.7 per cent pay rise for each RMT worker. 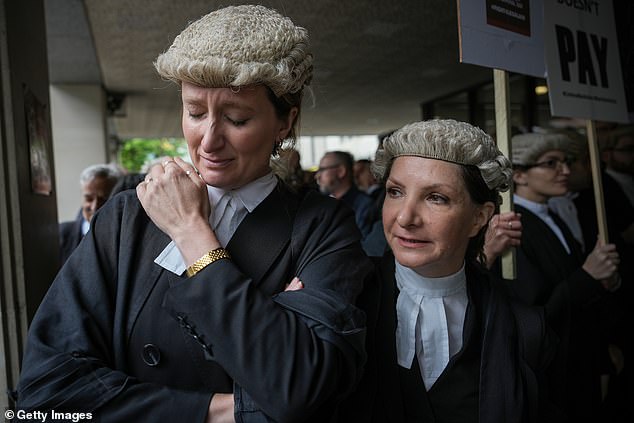 Barristers also joined the picket line yesterday, with the Criminal Bar Association claiming they were the ‘poor persons’ of the legal system

Last week Transport Secretary Grant Shapps said that ‘rail strikes are not as effective a tool for the unions as they were once’ due to post-pandemic working patterns and employees opting to work from home.

Yesterday he tweeted: ‘The days when rail strikes could bring Britain to a halt are gone.

‘For millions, rail is now a choice, not a necessity. Tragically, this means that, if strikes continue, the biggest victims may end up being rail workers themselves. Time to modernize the railway & end this strike. ‘

Talks between the RMT and Network Rail are continuing.