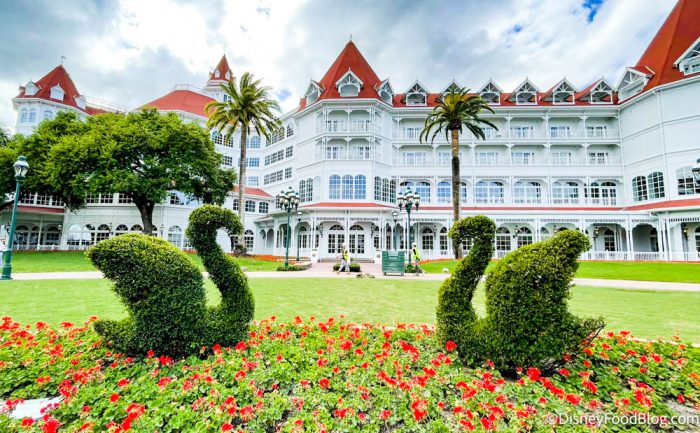 Disney Vacation Club members have access to these rooms, but the general public can also book the villas and studios – they just usually cost more than the average Disney hotel room. Now, one of Disney World’s most luxurious (and ehotels has NEW DVC resort studios! We’re heading inside to check them out, so come along with us for a full tour of the brand new resort studios at Disney’s Grand Floridian Resort.

We attended the opening ceremony for the DVC resort studios at Disney’s Grand Floridian Resort yesterday. After the ceremony (which was hosted by Alice in Wonderland characters), we had the chance to tour both the updated DVC villas and the NEW resort studios. 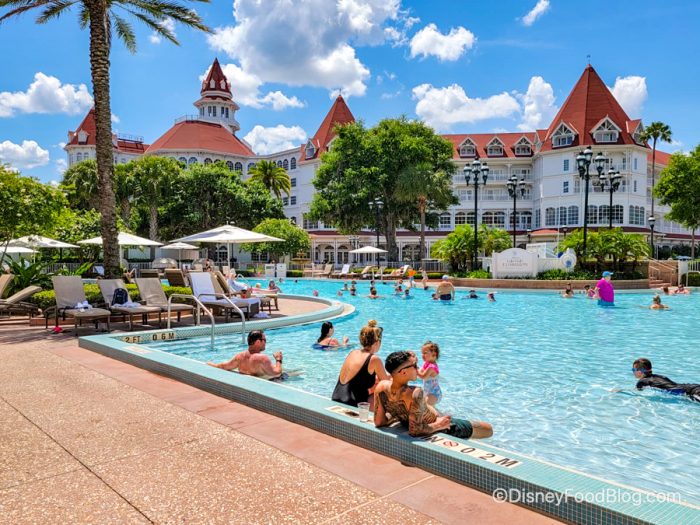 Welcome to the Grand Floridian!

We have another post with a full tour of those updated villas, but right now we’re interested in the brand new rooms! The Grand Floridian Resort is one of Disney World’s fanciest and most expensive hotels. It’s one of the Monorail resorts, which means it’s just a short ride away from Magic Kingdom. In fact, you can see the Magic Kingdom across the Seven Seas Lagoon, so guests can watch fireworks from the hotel! 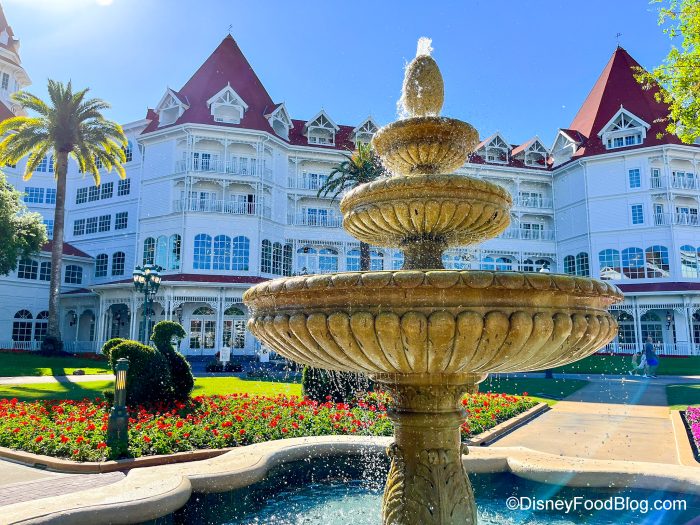 It also has very elegant theming, and Disney has been adding touches of Mary Poppins decor to various parts of the resort. For example, Citricos (a restaurant at this hotel) is now subtly Mary Poppins–Themed. 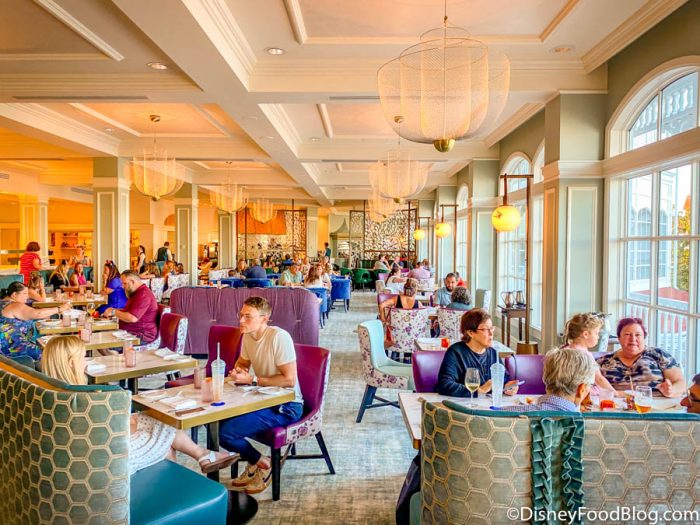 More amenities at this resort include several dining options, access to walking paths to Magic Kingdom, a spa, and 2 pools. 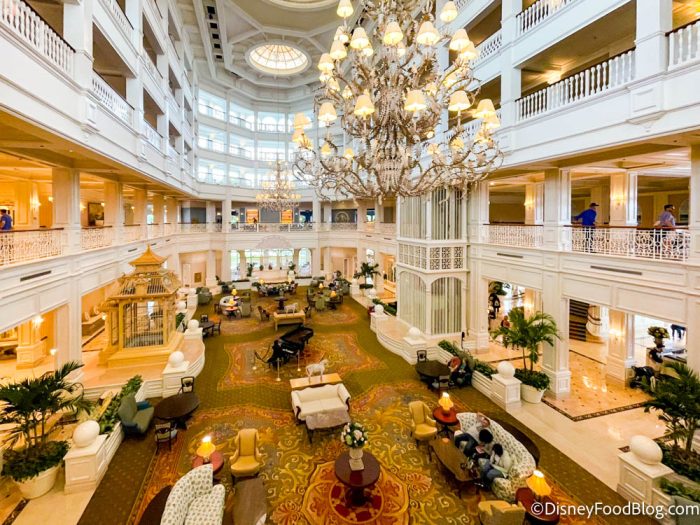 The new Mary Poppins theme has extended to the DVC resort studios, which have nods to the sequel, Mary Poppins Returns. You’ll find these rooms in the Big Pine Key building of the Grand Floridian, which used to house normal guest rooms. 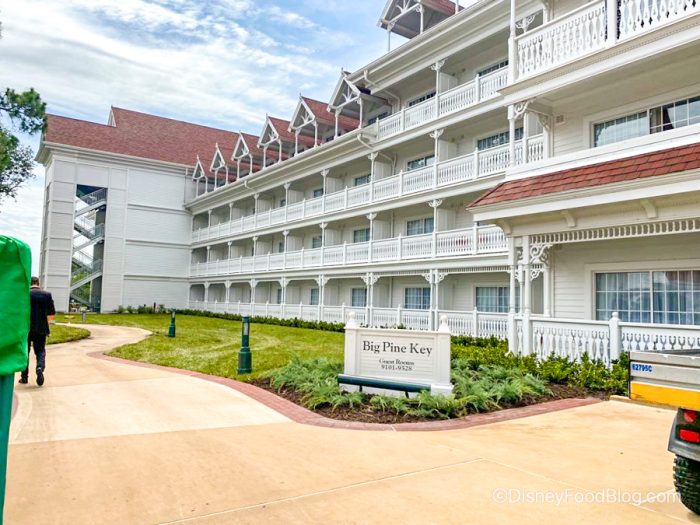 Remember that you don’t have to be a DVC member to book these rooms, and reservations are available now. The lobby area of ​​Big Pine Key received a few updates, with new furniture, artwork, and paint. 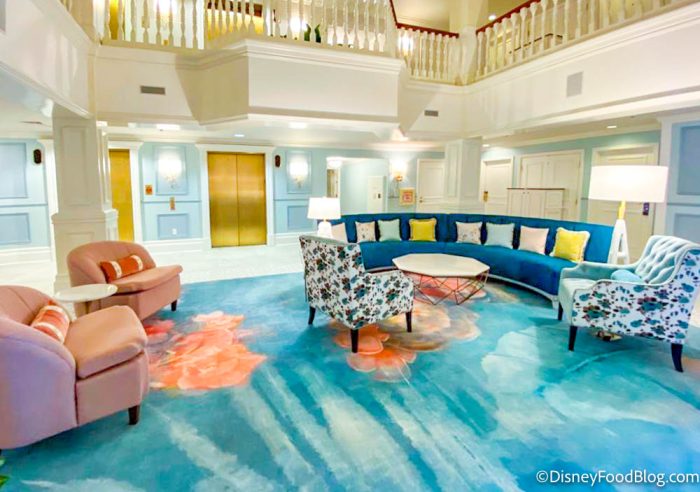 The pastel mixed with rich jewel tones, floral patterns, and velvet fabric reminds us a lot of the new look at Citricos! 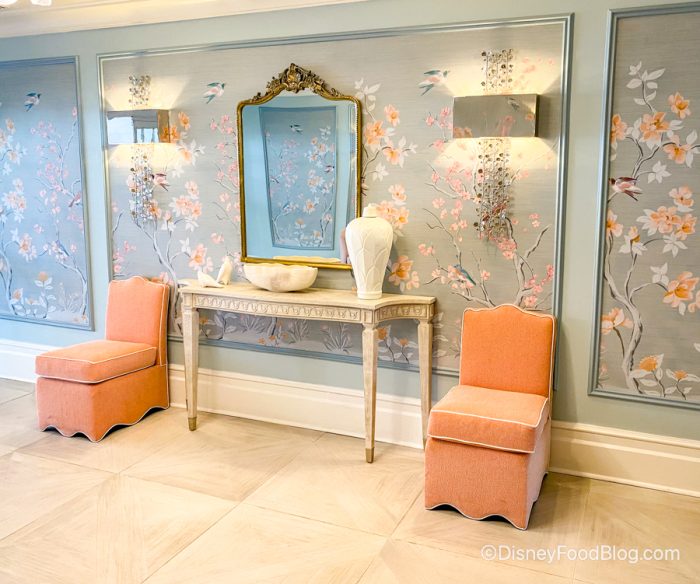 Heading into one of the resort studios, you’ll see more floral patterns and pastel shades. On one side when you enter, there’s a desk and mirror against a wall that’s been painted with a nature scene mural. A bench is tucked under the desk. The brushed gold accents are a theme throughout the room. 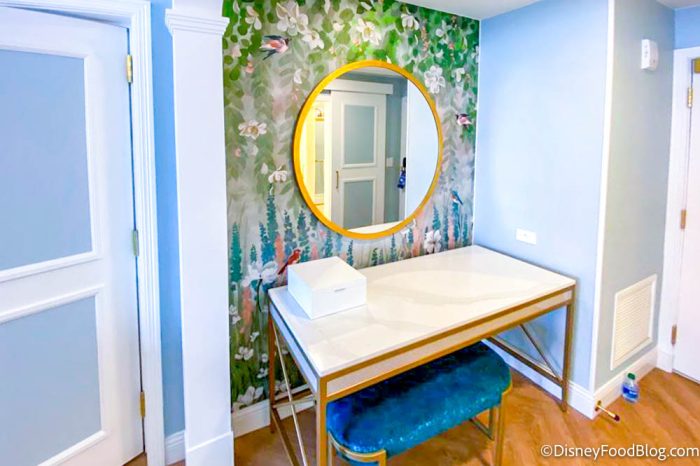 The other side of the entryway has a small coffee station, which holds a Keurig coffee machine, some mugs and glasses, and a container for ice. If you look carefully at the wallpaper here, you can spot some characters from Mary Poppins Returnsalong with umbrellas hidden in the pattern! Note that many DVC villas have a kitchenette area, but the resort studios do not. There is a mini-fridge in each room, and that with this beverage station is the extent of the kitchen amenities. 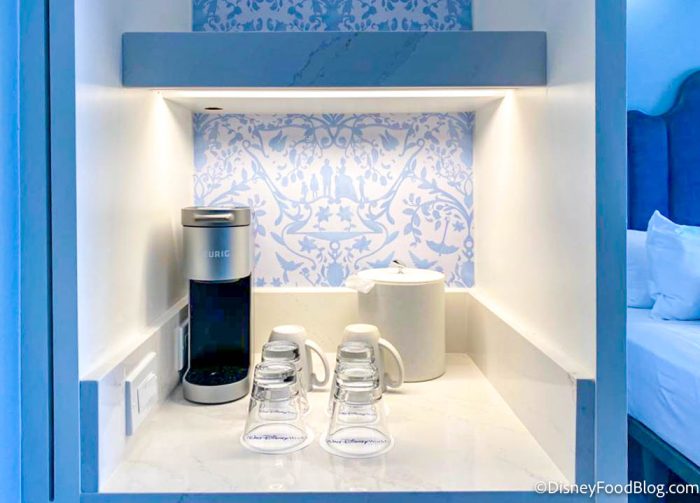 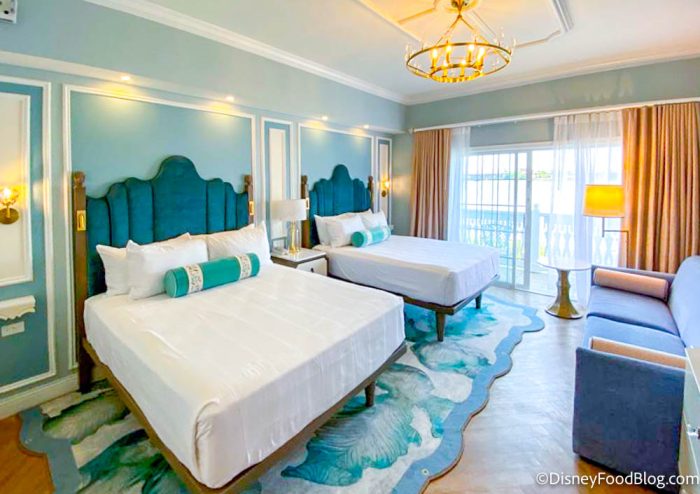 And can you see that elegant, gold chandelier? It’s also got some Mary Poppins touches! There are little glass birds on the outside circle of the fixture. 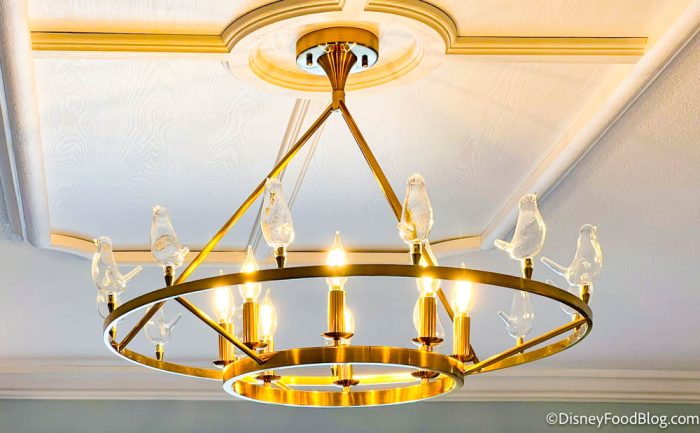 You’ll spot more theming in the vents, which hide both a hidden Mickey AND hidden umbrellas! Can you find them?

Look carefully at the lampshade on the nightstand as well to find even more umbrellas. 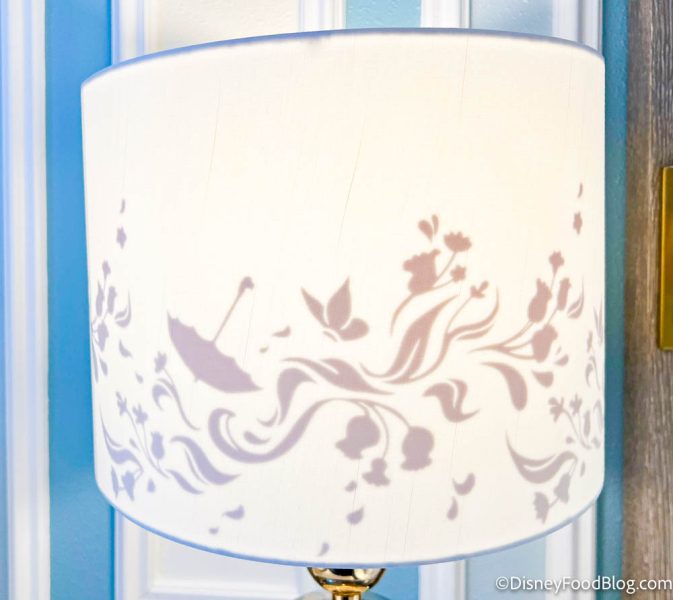 The room we toured had its own balconywith a sliding door and seating outside. 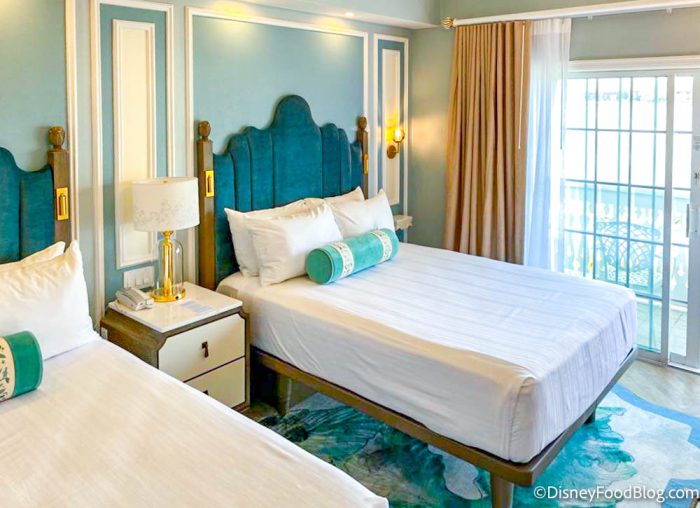 There’s a closet next to the beds, where guests can store their luggage and clothes. The closet has floral wallpaper decorating the doors. 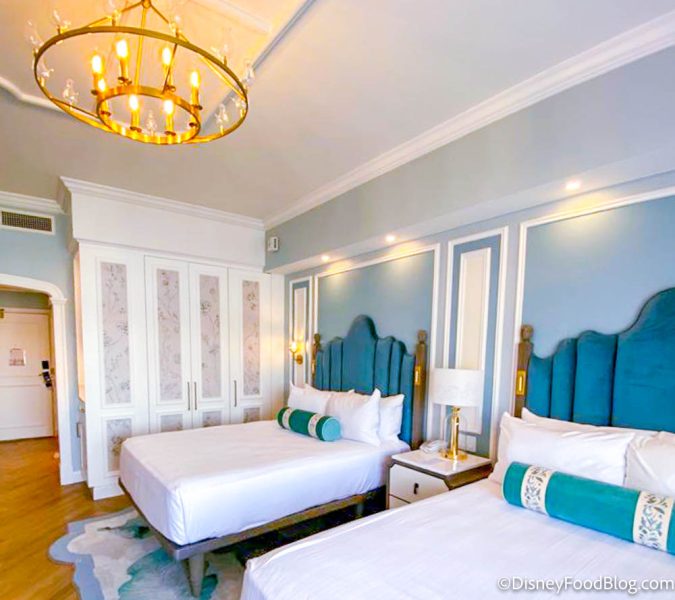 Inside, you’ll find extra pillows and blankets, a rod for hanging clothes, and suitcase stands. 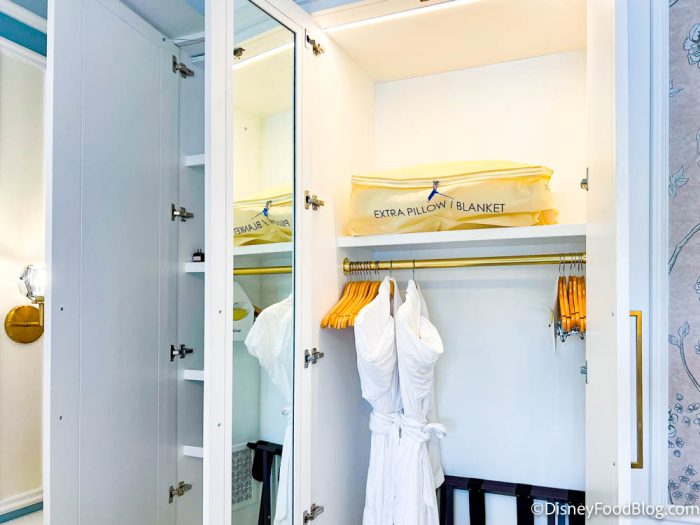 For more storage, there’s a dresser across from the beds, which is also where you’ll find a sofa and the TV. Some watercolor artwork here shows a landscape that looks a bit like Cherry Tree Lane. 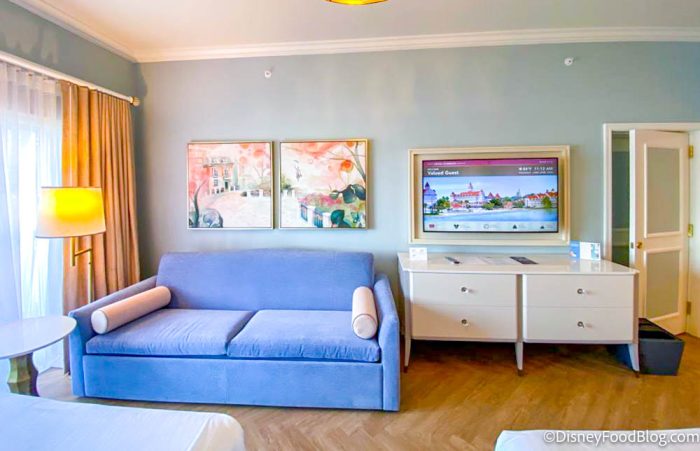 And is that Mary Poppins herself that we spot flying through the air? 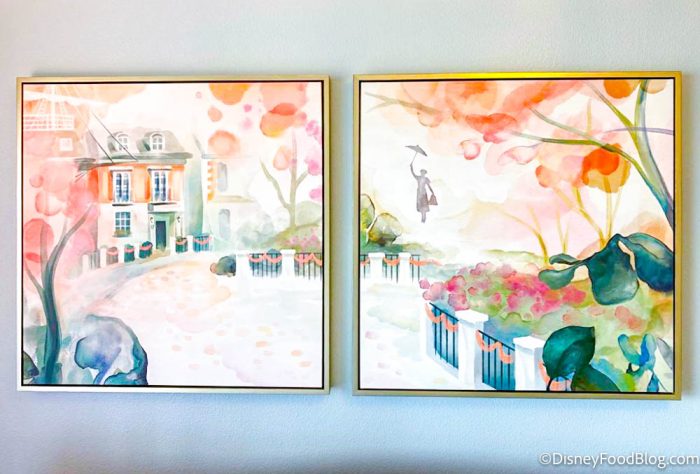 The sofa actually folds down to become a daybedwhich is how these studios can sleep 5 people. 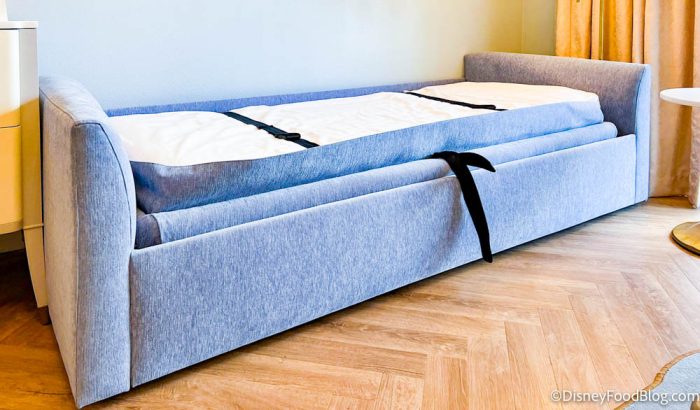 Sofa as a bed

Believe it or not, one of our favorite parts of this room was actually in the bathroom. Can you believe that mirror ?! It has a gold frame and lighting all around the border in intricate patterns. More brushed gold continues into the vanity area, along with watercolor artwork. There are 2 sinks, towels under the counter, and Disney’s signature H2O products. 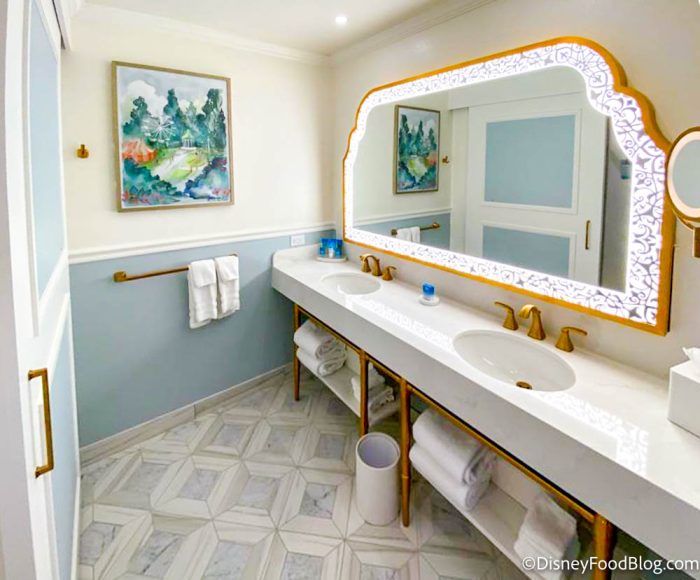 But seriously. THAT MIRROR. Oh, and if you wanted a smaller lit mirrorthere’s a fold-out one as well beside the large one. 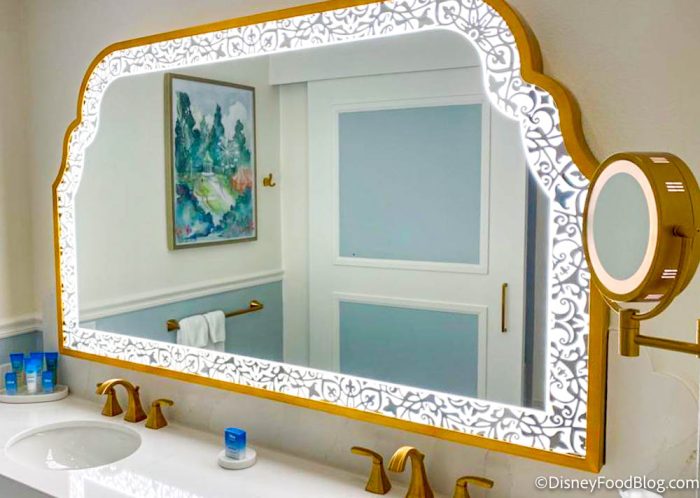 There’s a separate water closet for the shower and toilet. Shampoo, conditioner, and body wash are located inside the shower. The room we toured had a shower-tub combo, with a sliding glass door. 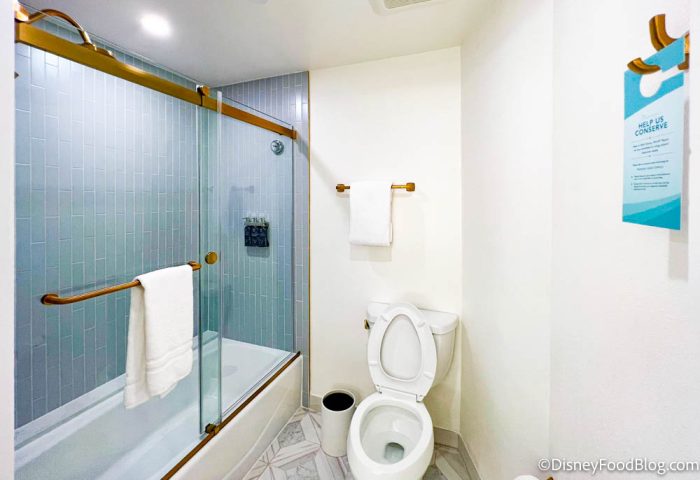 And that concludes our tour of the new DVC resort studios at Disney’s Grand Floridian! The rooms are open now and available for booking. 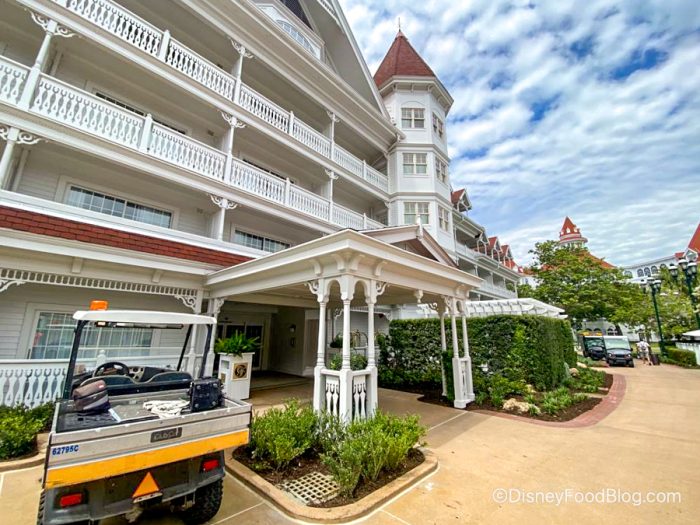 If you want to learn more about the DVC, visit our page to learn all about the club.

The Grand Floridian isn’t the only hotel to have updated rooms and a new look! At Disney’s Polynesian Resort, you can check out the new Moana-themed rooms, and Disney’s Contemporary Resort has Incredibles-themed guest rooms. 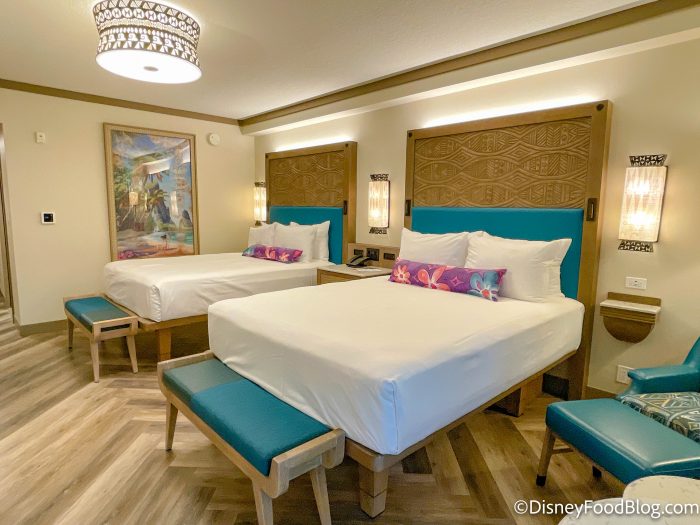 Lots of changes are on their way to Disney’s Boardwalk Inn as well, with new restaurants and an updated lobby coming soon!

Keep following DFB for more of the latest Disney news!

Click here to see the definitive ranking of EVERY Disney World hotel.

Have you stayed at Disney’s Grand Floridian Resort? Let us know in the comments!

Disclosure: In nearly all circumstances, Disney Food Blog writers and photographers pay full price for their own travel, hotel, food, beverage, and event tickets. We do this because it’s important to us as journalists to ensure not only that we give you unbiased opinions, but also that you can trust us to do since we’re paying our own way. On rare occasions, when we are invited by a company to attend a preview as media, and when we choose to accept that invitation, we will always make you, our readers, aware of that situation. Today, we were invited by Disney World to attend their media preview of the new resort studios at Disney’s Grand Floridian Resort. Note that when we attend events as media we are 1) Not required to review that event / food on any of our channels, and 2) Not required to review that event / food favorably. You can always count on DFB to give you a 100% unbiased and honest review of any event that we attend, food that we eat, or beverage that we drink. You can see more in our Disclosure Policy. Thank you for reading. – AJ