Paul McCartney showed his support for Ukraine during his historic headline show at Glastonbury on Saturday, as the country remains gripped by a war with Russia.

The Beatles legend, 80, returned to the stage for an encore performance brandishing the country’s flag, earning a huge cheer as he waved it over his head.

It comes after it was reported Paul had removed the song Back In The USSR from his planned Glastonbury set and all future shows in the wake of Russia’s invasion of Ukraine. 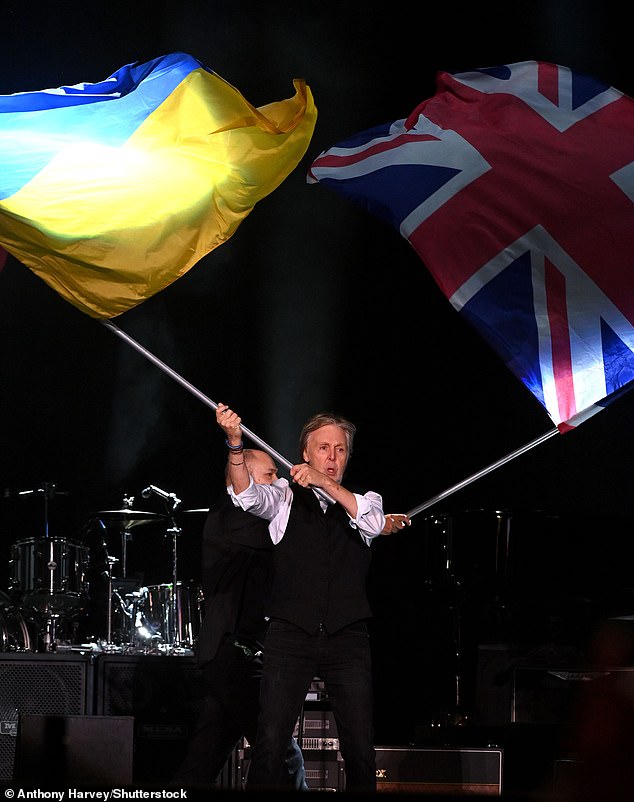 Honouring: Paul McCartney, 80, showed his support for Ukraine as he waved the country’s flag during his historic headline show at Glastonbury on Saturday

After a stunning performance of his song Hey Jude, Paul bide farewell to the crowd and left the stage, but following calls for an encore returned to the stage with a flag in his hand.

As he waved the flag over his head, the hitmaker, who has made a similar gesture during shows on his tour, earned a huge cheer from the crowd.

It was reported last week that Paul had chosen to ax The Beatles song Back In The USSR from all future shows in the wake of Russia’s invasion of Ukraine. 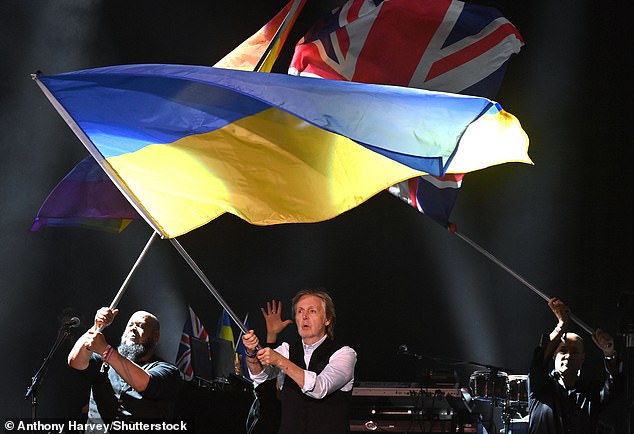 Sensational: The Beatles legend returned to the stage for an encore performance brandishing the country’s flag, earning a huge cheer as he waved it over his head 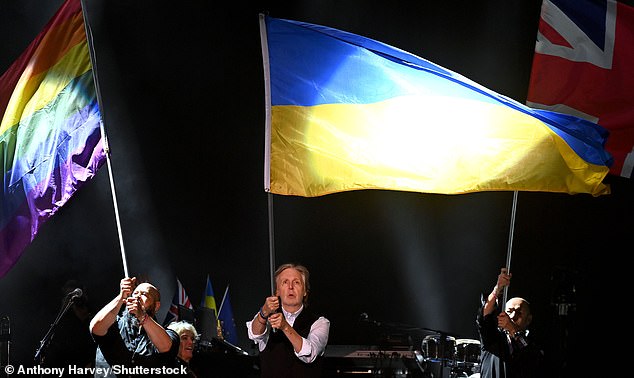 Support: It comes after it was reported Paul had removed the song Back In The USSR from his planned Glastonbury set and all future shows in the wake of Russia’s invasion of Ukraine 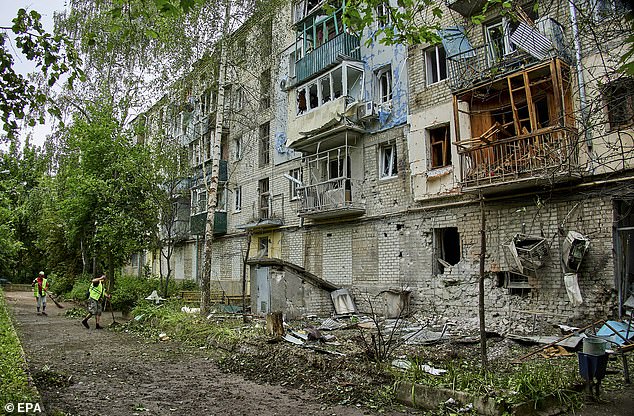 Devastating: Large parts of Ukraine have been devastated by the Russian invasion, with millions forced to flee their homes (Kharkiv is pictured on June 25)

The satirical Cold War-themed track pokes fun at Chuck Berry and the Beach Boys’ odes to America, and is told from the perspective of a Russian spy returning from America.

A source told The Mirror: ‘It would be perverse to be singing a jaunty rock’ n ‘roll song about Russia.

‘Paul couldn’t in all conscience sing those lyrics when so many are being brutally massacred at the hands of Russia.

‘The song is such a massive crowd favorite but with the horrors unfolding in Ukraine, it was a simple decision by Paul to make.’ 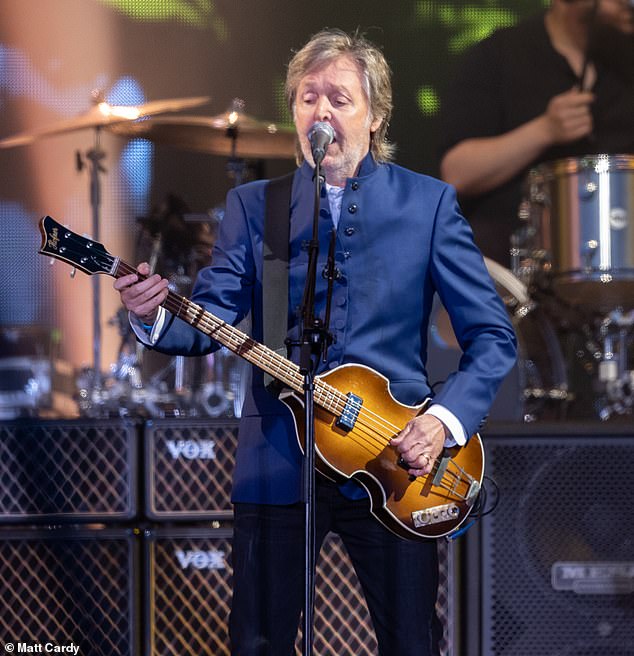 Stellar: Paul’s Glastonbury set was lauded by fans after the music legend became the oldest solo star to headline the festival

Paul’s historic Glastonbury set was lauded by fans as the music legend wowed with his vast medley of hits, just a week after celebrating his 80th birthday.

Taking to the stage for his first performance at the festival in 18 years, Paul performed hits ranging from his Beatles heyday to his time with the band Wings.

To no surprise Paul’s set earned an overwhelmingly positive reception from viewers, with many taking to Twitter to share their reaction.

One wrote: ‘Anyone criticizing Paul McCartney tonight can f ** k right off, he’s 80 and is the most culturally important bloke this country has produced in a hundred years, he’s beyond critcism, so b **** x off.’ 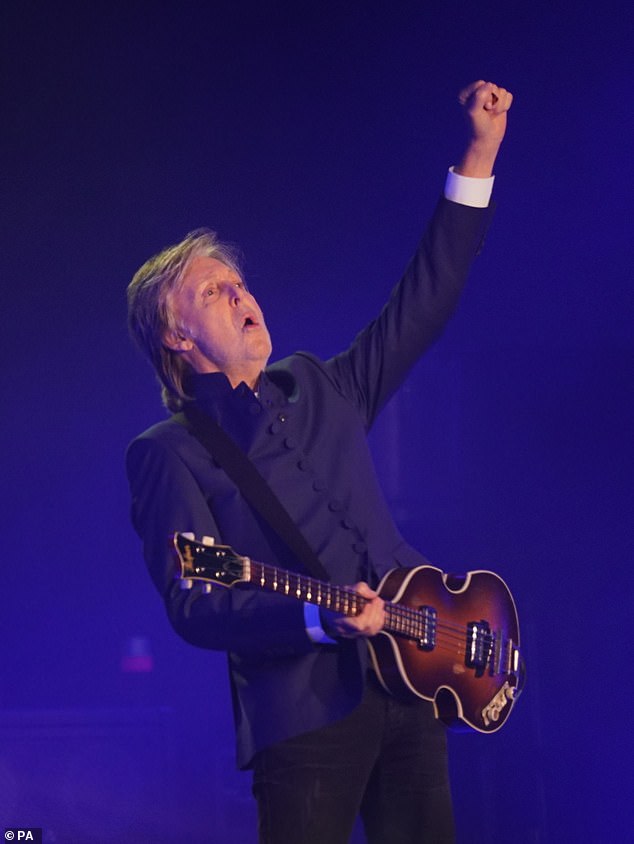 Jaw-dropping: Viewers took to Twitter to praise the show after tuning in to watch it on BBC One, as Paul wowed with his vast medley of hits 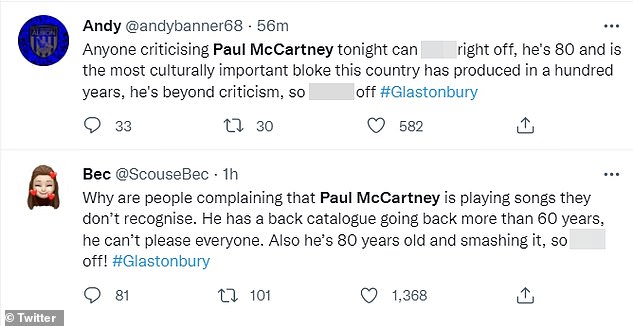 Another added: ‘Why are people complaining that Paul McCartney is playing songs they don’t recognize. He has a back catalog going back more than 60 years, he can’t please everyone. Also he’s 80 years old and smashing it, so f ** k off! ‘

‘I don’t think people understand how important it is that Paul McCartney is headlining the Glastonbury Festival in 2022, at the age of 80,’ a third added.

‘That’s some real iconic stuff. He really is in his league. Unbelievable, ‘one delighted fan added.

‘Paul McCartney has earned the right to play whatever songs he wants, even if his voice might not be what it once was.

‘Most 80-year-olds couldn’t even stand up this long let alone remember all the words and play the guitar and bass as well as anyone,’ one viewer praised.

‘I want to be like Paul McCartney when I’m 80. What a legend,’ another tweeted. 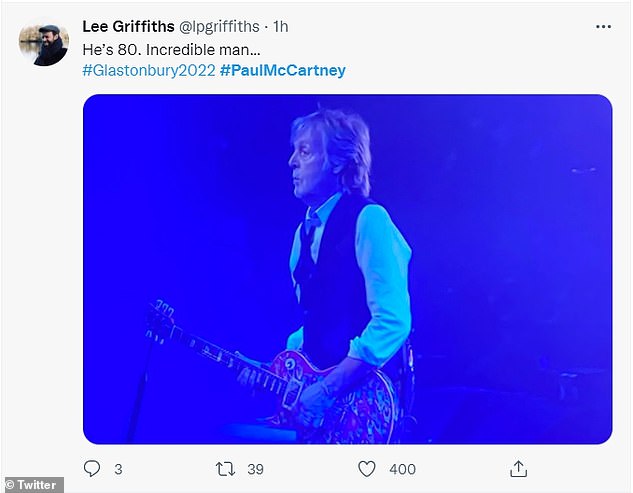 We loved it! To no surprise Paul’s set earned an overwhelmingly positive reception from viewers, with many taking to Twitter to share their reaction

Elsewhere during his set, Paul showed his allegiance to his pal Johnny Depp while performing his 2012 track, My Valentine, as he projected a clip of the actor from the song’s music video onto the screen behind him.

He recently used the footage in his recent US Get Back tour, while the Pirates Of The Caribbean star was in the middle of his defamation trial against his ex-wife Amber Heard, which he later won.

Paul did not address Depp’s $ 100million court case against Amber directly during the concert but as soon as the images of the actor appeared on stage, the crowd cheered.

The Love Me Do hitmaker also got the crowd to cheer for his home city of Liverpool, as well as his late bandmate John Lennon, to whom he dedicated Here Today to.

The show proves a poignant moment in Paul’s lengthy career, as it also came 55 years to the day since The Beatles reached the largest audience in their history, when they performed on the world’s first global TV broadcast. 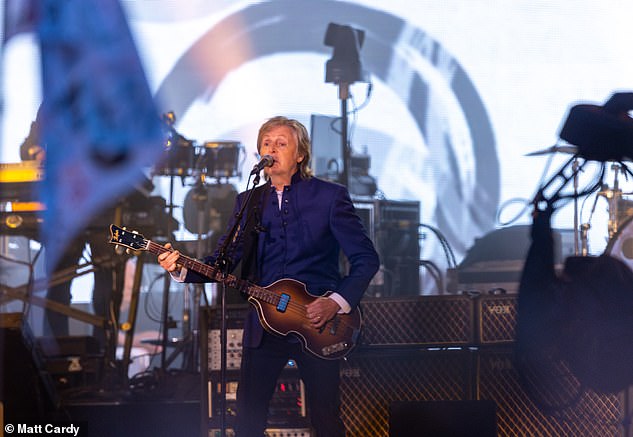 Amazing: With Paul having celebrated his 80th birthday last Saturday, his crowd of adoring fans sang Happy Birthday to him, before he broke into his 1995 hit, I Feel Like I’m Letting Go