Patients find getting GP test results by text annoying, according to academics who say a lack of clear communication can be risky.

Dozens of GPs and patients were quizzed about how they received their results from routine blood tests.

The survey revealed that some patients were left waiting for results because they wrongly expected their doctor to contact them.

Some assumed that ‘no news was good news’ and others did not want to wait on hold for GP receptionists to answer their calls.

University of Bristol researchers, who carried out the poll, warned delays can lead to ‘missed diagnoses’.

Study author and GP Dr Jessica Watson said relying on patients to get in touch and assuming they know how to access results ‘were particular risks’. 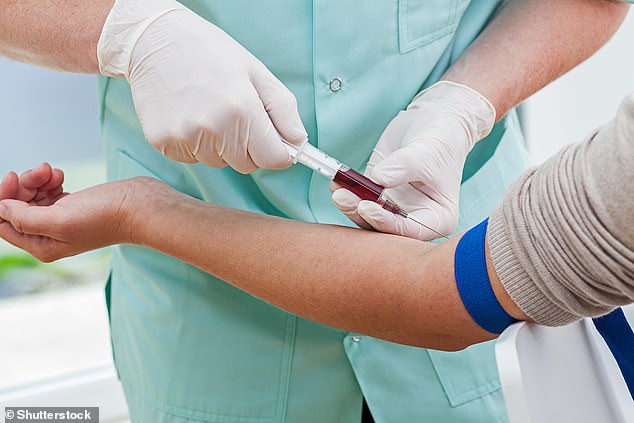 University of Bristol researchers, who interviewed dozens of GPs and patients, found that patients were expected to find out the results of their blood tests by waiting for texts or calling practices

HOW ARE BLOOD TEST RESULTS DELIVERED?

Doctors, other medics or receptionists can provide the results.

But a University of Bristol study found that the vast majority of results are delivered by text or patients practice phoning to speak to receptionists.

After a blood sample is taken, it will be put into a bottle and labeled with your name and details.

It will then be sent to a laboratory where it will be examined under a microscope or tested with chemicals, depending on what is being checked.

The results are sent back to the hospital or to your GP.

Some test results will be ready the same day or a few days later, although others may not be available for a few weeks.

GPs are supposed to inform patients when their results will be ready and how they will be given to them.

Researchers interviewed 19 GPs and 28 patients from six practices in Bristol, Somerset and Gloucestershire.

Between May 2019 and March 2020, patients were quizzed at or soon after their blood test and again after they received their results. Doctors who commissioned the tests were also interviewed.

The findings, published in the British Journal of General Practice, show that patients received their results based on the habits and personal preference of their GP.

It revealed that text messages are becoming a more common method of communication, in part because of the Covid pandemic.

Sending results by text was thought of positively by most doctors, who claimed patients ‘love’ the messages.

But while some patients said they were ‘quick and easy’ method of getting results, many complained they did not provide enough information to understand their results.

They also warned that they ‘obviously’ wouldn’t want to hear about worrying results through text, labeling it ‘inappropriate’. Meanwhile, doctors said they would text or call a patient if their results were abnormal.

Some blood result texts asked patients to contact doctors if they had concerns or questions, patients weren’t sure how to get in touch or if they should book an appointment with their GP.

As well as through texts, results can also be dished out by phone calls and face-to-face appointments.

Patients were also expected to find out their own results, sometimes without being given any instructions.

Doctors claimed they expected patients to know how to access results, which can be accessed via an online portal for patients at some practices.

One anonymous GP said the ‘onus is always on the patients’ at their practice. But they “normally speak to the patient straightaway” if there is an “abnormality”.

GPs told the researchers that patients should ‘never presume no news is good news’.

But patients said they assumed nothing was wrong if they hadn’t been contacted by their surgeon. And they didn’t want to wait for up to 30 minutes on the phone to their GP practice to check.

Patients also complained about being given results by receptionists, who they were unconvinced could correctly interpret blood test results.

Delays and difficulties obtaining and interpreting test results often lead to anxiety and frustration for patients, the researchers reported.

And a lack of clear systems to get results ‘exacerbated’ this and left some patients ‘in limbo’, they said.

Patients also complained about the lack of GP appointments if they had unanswered questions about their tests.

Dr Watson said: ‘GPs have a medico-legal and ethical responsibility to ensure they have clear, robust systems for communicating test results.

New technologies may be incorporated into these systems, but they are not a panacea.

‘Failure to ensure safe systems for communicating test results could have significant consequences for patients and practices.

‘Relying on patients to get in contact and making assumptions about their knowledge of how to do so were particular risks highlighted in our research.’

The average GP is thought to spend one-and-a-half to two hours per day reviewing test results, so more efficient systems of test communication could slash their workload, as well as boosting patient safety, the researchers said.