A police officer in charge of safeguarding sexually harassed a junior female colleague after entering her hotel room, taking off her socks, and rubbing her thigh during a work ‘wellness weekend’ away.

Detective Constable Simon Spellman, 36, was sacked from his job after going into the woman’s room to borrow toothpaste as part of a ruse to ‘test the waters’ in the hope of engaging in a sexual relationship in September 2021.

The safeguarding detective constable made himself comfortable on her bed by taking off his socks and shoes after asking staff at the front desk for her room number and showing up unannounced, it was heard.

His ‘pathetic’ sexual harassment occurred after a night out during a ‘wellness weekend’ with Durham Constabulary staff at the Harrogate Police Treatment Centre, misconduct proceedings at The Old Houghton Magistrates’ Court heard.

The complainant, known as Ms F, froze and broke down in tears after locking herself in the bathroom during the encounter with the detective – whom she had only met a few hours earlier.

The 36-year-old father, who spoke about cheating on his partner, the court was told, laid on Ms F’s bed after brushing his teeth and stroked her upper thigh and back.

He admitted using his index finger to make small circles on her thigh, before touching her back, between her shoulder blades and asking the junior colleague how she was.

The complainant, who was more than a decade younger than the 6ft5 officer, was upset and ‘horrified’ by his actions and had escaped to the bathroom, making a panicked phone call to her partner. 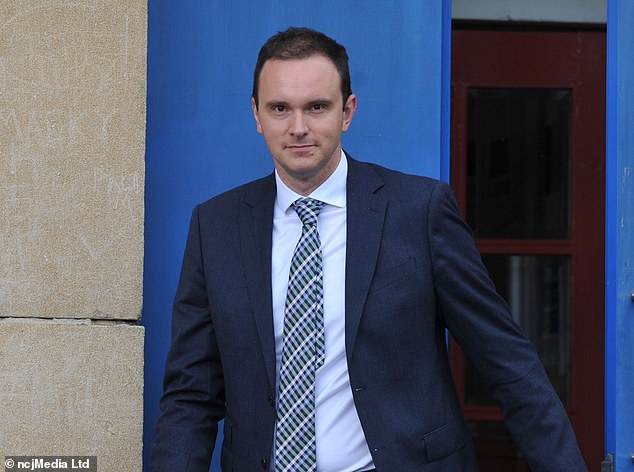 Safeguarding Detective Constable Simon Spellman, 36, (pictured) found out the woman’s room number, showed up without prior warning, and took his shoes and socks off before brushing his teeth. He then touched her thigh and back during the ‘pathetic’ sexual harassment, which happened on a ‘wellness weekend’ with Durham Constabulary staff at the Harrogate Police Treatment Center 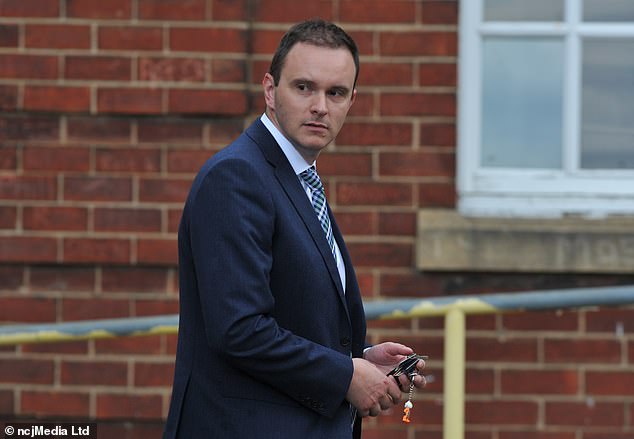 The panel found that the Darlington-born father (pictured) went to Ms F’s bedroom having already decided she was interested in him – despite her speaking repeatedly about her partner and her intention to buy a house with him. He has now been sacked from his safeguarding role

She burst into tears after the man touched her, saying ‘I don’t know what to do’.

In a statement, her partner told the misconduct hearing: ‘She is usually a calm and chilled-out person. She didn’t know how to deal with the situation and she was panicking.’

He added: ‘She should have felt safe especially going away with police…. I thought this guy was totally out of order going to her room and obviously expecting something from her.’

The officer, who worked in safeguarding, has now been dismissed without notice and was added to the barred list following the sexual harassment.

Defending himself, the former DC said: ‘I didn’t think that she didn’t want me there at that point. I thought she was quite comfortable with me being there and we were still chatting and getting along.

‘I thought we were getting on quite friendly, her not making any objections to me being here, which is why I started [touching her]. It was the only reason why.’

He denied lying down on the bed or taking off his socks, or arriving at her room with any intention other than to get toothpaste.

The panel found that the Darlington-born father went to Ms F’s bedroom having already decided she was interested in him – despite her speaking repeatedly about her partner and her intention to buy a house with him.

Mr. Spellman eventually left the bed for around 30 minutes when the complainant told him he had to go because she received some bad news.

When DC Spellman left the room, he sent three messages over Facebook asking: ‘Hey hope you’re okay x. Sounds like something bad had happened so don’t worry about kicking me out lol.’

He then sent a single question mark when the woman did not respond.

In an interview played during the misconduct hearing, the victim said: ‘I felt so much relief that he was gone. I still had to spend the whole weekend with him and I didn’t know what his intentions were for being in my room.

I definitely think he was trying it on with me… I had spoken about my boyfriend and how we were going to start a family and buy a house. I was just really scared, I didn’t know what he was going to do. I didn’t even know him.’

After Ms F told fellow colleagues what had happened the next morning, DC Spellman visited her room again to apologize for making her feel uncomfortable after he was confronted by another sergeant.

Mr. Spellman admitted that he had breached the professional standards of authority, respect and courtesy, constituted discreditable conduct but denied that this amounted to gross misconduct.

Simon Mallet, chairman of the panel, said: ‘The panel accepts that the officer did take off his socks and Ms F did change her attire before the officer came into her bedroom and that Ms F moved her leg rather than the officer stopping touching her. .

The removal of his socks suggests that the officer intended to prolong his stay in her bedroom. However, the panel accepted the officer was unsure whether she had felt the touch [to her thigh].’

‘The officer wrongly and genuinely thought they did. The context was that he unjustifiably misread the situation, perhaps influenced to some extent by the alcohol he had consumed.

‘The panel considers he has shown genuine remorse for his actions and has learned his lesson from it.’

They also said that as a safeguarding officer he ‘should have had a greater understanding of inappropriate conduct than other officers given his role’ and that he could reasonably have foreseen the harm which occurred, saying ‘it should have been obvious to him’.

Oliver Williamson, for the relevant authority, said: ‘This is serious and has caused harm to Ms F and would cause serious harm to the wider public and the reputation of the force and colleagues.’

During his evidence on Tuesday, DC Spellman accepted that public confidence would be ‘damaged’, especially as his role is in safeguarding.

Mr Mansell submitted that a final written warning be made, rather than dismissal, to mark the seriousness of the matter without destroying the father-of-one’s ‘whole, unblemished 14-year career because of a single stupid mistake’.

However, the panel found that public confidence in the force could not be maintained if any action less than dismissal was taken.

The public and the force would not expect an officer who has committed such an act, even in these circumstances and with his personal mitigation, to remain as a serving officer. It’s the panel’s view that public confidence in policing cannot be maintained by a final written warning in all circumstances in this case.

‘The only appropriate outcome in this case is dismissal without notice.’

A panel has now adjourned to decide whether DC Spellman’s actions amounted to gross misconduct.