Mike Tyson dressed up in a wacky bumblebee costume while dancing behind the scenes at Jimmy Kimmel Live on Thursday.

Taking to his Instagram Story to poke fun at his get-up, the former professional boxer, 55, had been judging as part of a spelling bee on the show.

His eye-popping ensemble consisted of a yellow-and-black striped padded top, along with matching wings and a had with fluffy ears. 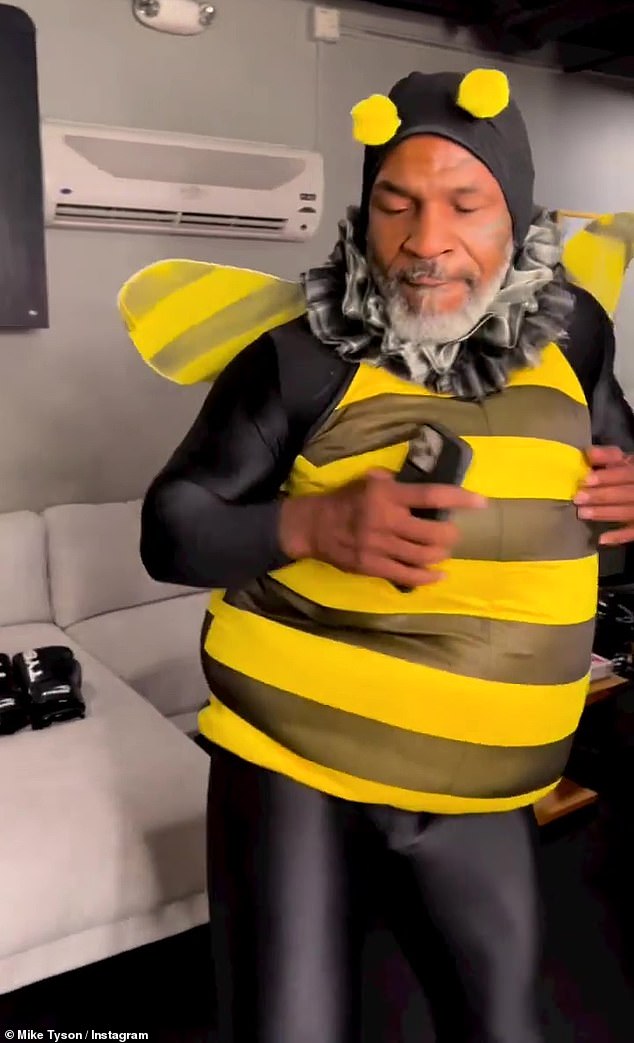 ‘It’s none of your beeznuss!’ Mike Tyson danced in a wacky bumblebee costume with striped wings and fluffy ears before judging a spelling bee on Jimmy Kimmel Live on Thursday

The outfit continued with tight black leggings, as well as a ruffle collar.

In the clip, Mike hilariously sang, ‘Beautiful, I’m feeling beauti-beauti-beautiful,’ while writing in his caption: ‘It’s none of your beeznuss @jimmykimmellive.’

Every year, Jimmy invites the winner of the Scripps National Spelling Bee to defend their title against the talk show host.

This year, he had 14-year-old Harini Logan from Texas competing for judges, security guard Guillermo Rodriguez, his own cousin Sal as well as Mike. 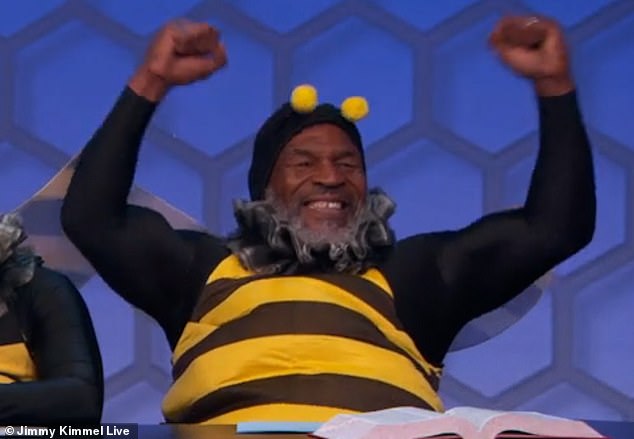 Good sport: Taking to his Instagram Story to poke fun at his get-up, the former professional boxer, 55, had been judging as part of a spelling bee on the show

Preparing Mike for his grand arrival, Guillermo said: ‘He floats like a butterfly, he stings like a spelling bee,’ before Jimmy asked Harini, ‘Do you know Mike Tyson?’

It comes after Hulu released a preview for the upcoming limited series Mike, which chronicles the life story of the boxer.

The preview, set to the song I’ve Gotta Be Me, features a montage of clips documenting Tyson’s rise as a boxer to his pinnacle of fame and fortune, his prison stint in his 1992 rape conviction and the 1997 incident in which he bit the ear of opponent Evander Holyfield. 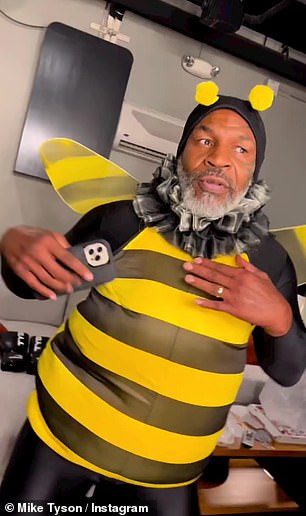 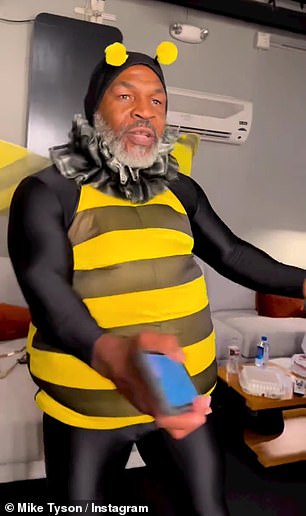 Wow! His eye-popping ensemble consisted of a yellow-and-black striped padded top, along with matching wings and a had with fluffy ears 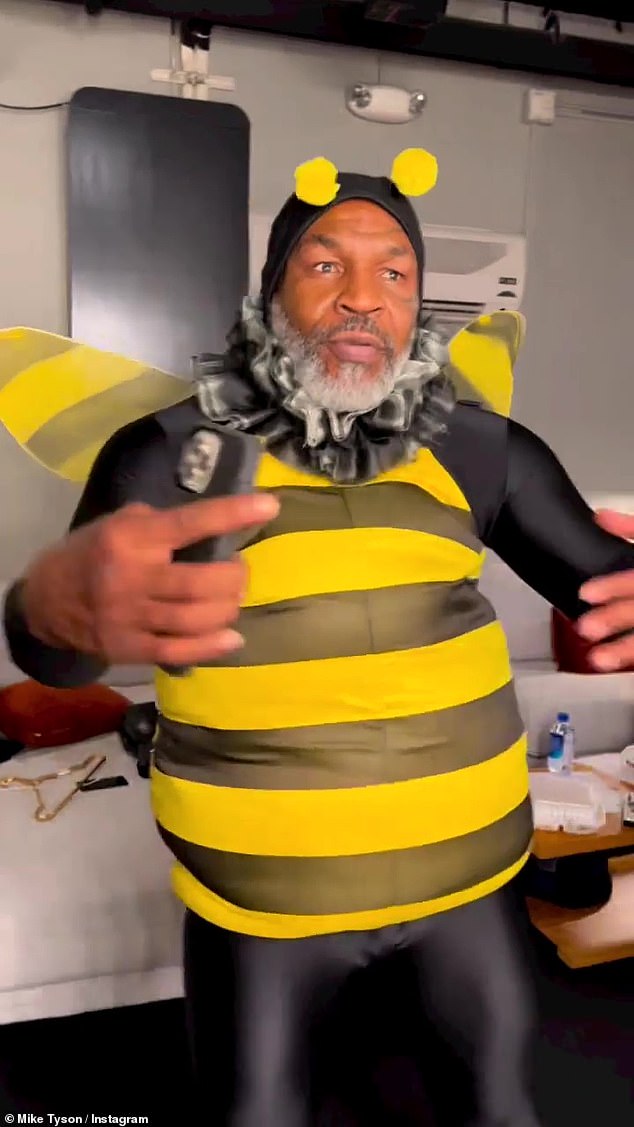 Unmissable: The outfit continued with tight black leggings, as well as a ruffle collar

Joker: Mike wrote in his caption: ‘It’s none of your beeznuss @jimmykimmellive’

A teaser in the preview reads, ‘You know Tyson, but do you know Mike?’

Showrunner Karin Gist told Entertainment Weekly that the series’ is not meant to glorify his life ‘but rather’ dig deeper ‘into the life of the athlete’ that everyone thinks they know.

‘We were never trying to say that Mike Tyson is a hero or Mike Tyson is a villain. Our goal was to take a very complicated and controversial figure and try to get under the hood of what he was praised and vilified for while staying true to our North Star of “no one person is one thing.” ‘

Gist told the outlet that ‘the show is not supposed to be a love letter or an indictment, which is why we had to include all the good, the bad, and the complexities of both,’ and that the contemporary cultural atmosphere allows for a candid looks into all aspects of Tyson’s life. 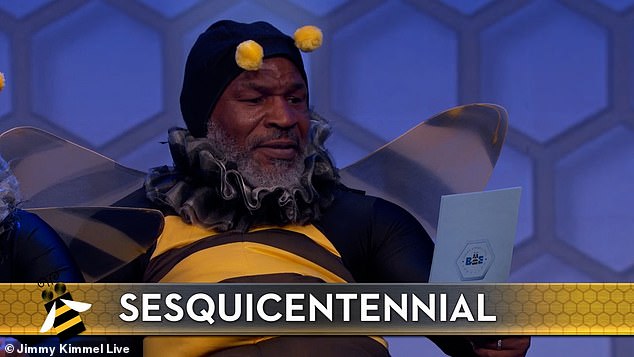 Judging: Every year, Jimmy invites the winner of the Scripps National Spelling Bee to defend their title against the talk show host 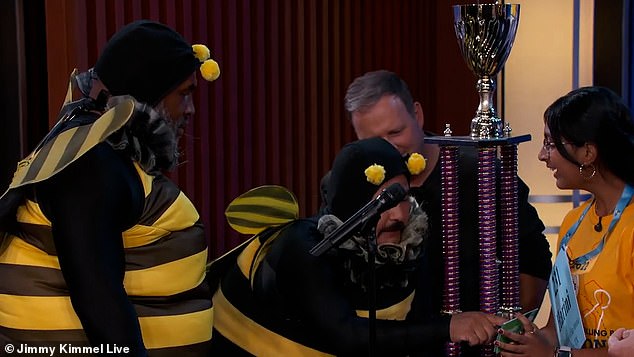 Talented: This year, he had 14-year-old Harini Logan from Texas (right) 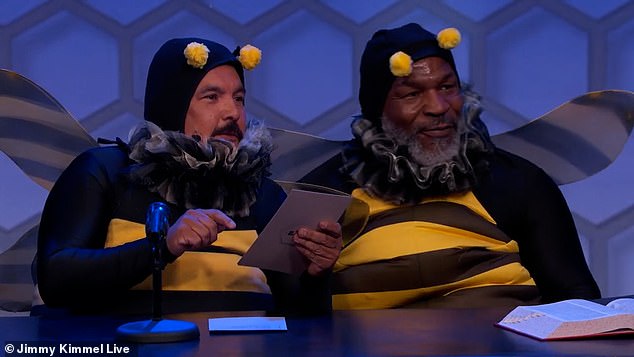 What a pair! She judged for judges, security guard Guillermo Rodriguez (left), his own cousin Sal as well as Mike

‘Fortunately, as a global society, we are all talking more and more about things that were once taboo or only whispered about among friends – rape, sexual assault, consent to name a few,’ Gist said. ‘Putting stories like this in the spotlight and pulling them out of the shadows is crucial to moving forward and getting the conversation to the next level.

‘The goal was not to shy away from the scary or uncomfortable parts of the story just because they are scary and uncomfortable.’

Creator Steven Rogers described Tyson’s life story to the outlet as ‘so compelling, contradictory, and complex,’ and ‘a cautionary tale of the American Dream.’ 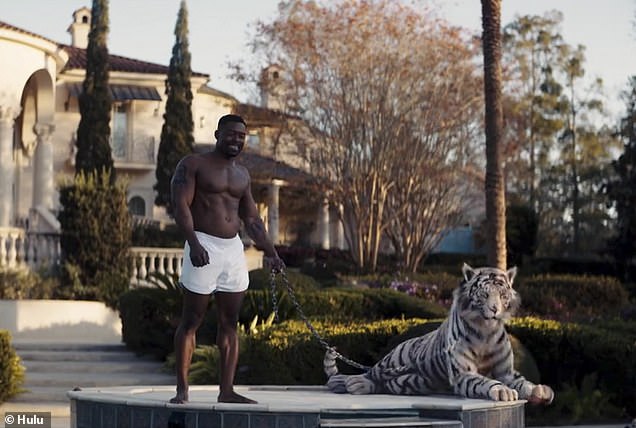 The latest: Hulu on Wednesday released a preview for the upcoming limited series Mike, which chronicles the life story of the boxer, starring Trevante Rhodes in the titular role

Rogers said in Tyson’s life, ‘You can find the roots of a lot of issues we’re grappling with today like #MeToo, Black Lives Matter, prison reform, mental health issues in it.’

Gist said that the series will depict ‘all sides of [Tyson’s] life and the lives of the people around him, ‘adding,’ No one is just one thing, ‘and’ there’s more behind a sound bite or a headline or gossip. ‘

Gist said that in making the series, ‘We wanted people to see Mike’s own culpability in his life and society’s culpability as well’ and ‘to let our audience decide what they think and feel.’

Tyson in February condemned the upcoming series after it was announced in a statement on Instagram.

‘Hulu’s announcement to do an unauthorized mini-series of the Tyson story without compensation, although unfortunate, isn’t surprising,’ he said. ‘This announcement on the heels of social disparities in our country is a prime example of how Hulu’s corporate greed led to this tone-deaf cultural misappropriation of the Tyson life story.’

Hulu said in a statement that the series’ explores the tumultuous ups and downs of Tyson’s boxing career and personal life – from being a beloved global athlete to a pariah and back again.

‘Focusing the lens on Mike Tyson, the series examines class in America, race in America, fame and the power of media, misogyny, the wealth divide, the promise of the American Dream and ultimately our own role in shaping Mike’s story.’

Mike is slated to premiere on Hulu August 25. 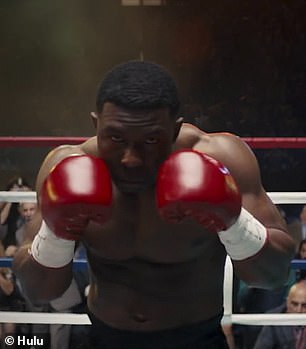 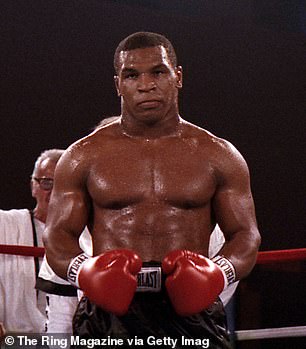 Rhodes is seen in the ring in a clip from the upcoming series; Tyson was seen ahead of a bout in Atlantic City, New Jersey in 1986