She’s famous for her hit song Hot Girl Summer – and Megan Thee Stallion is still living up to that title.

The 27-year-old rapper showed off her sizzling bikini body in Ibiza on Friday, as she partied with pals on a yacht, and was seen packing on the PDA with her boyfriend, rapper Pardison ‘Pardi’ Fontaine.

Rocking a stylish patterned two-piece, Megan sipped on wine as she struck a serious of sexy poses for all to see on the vessel. 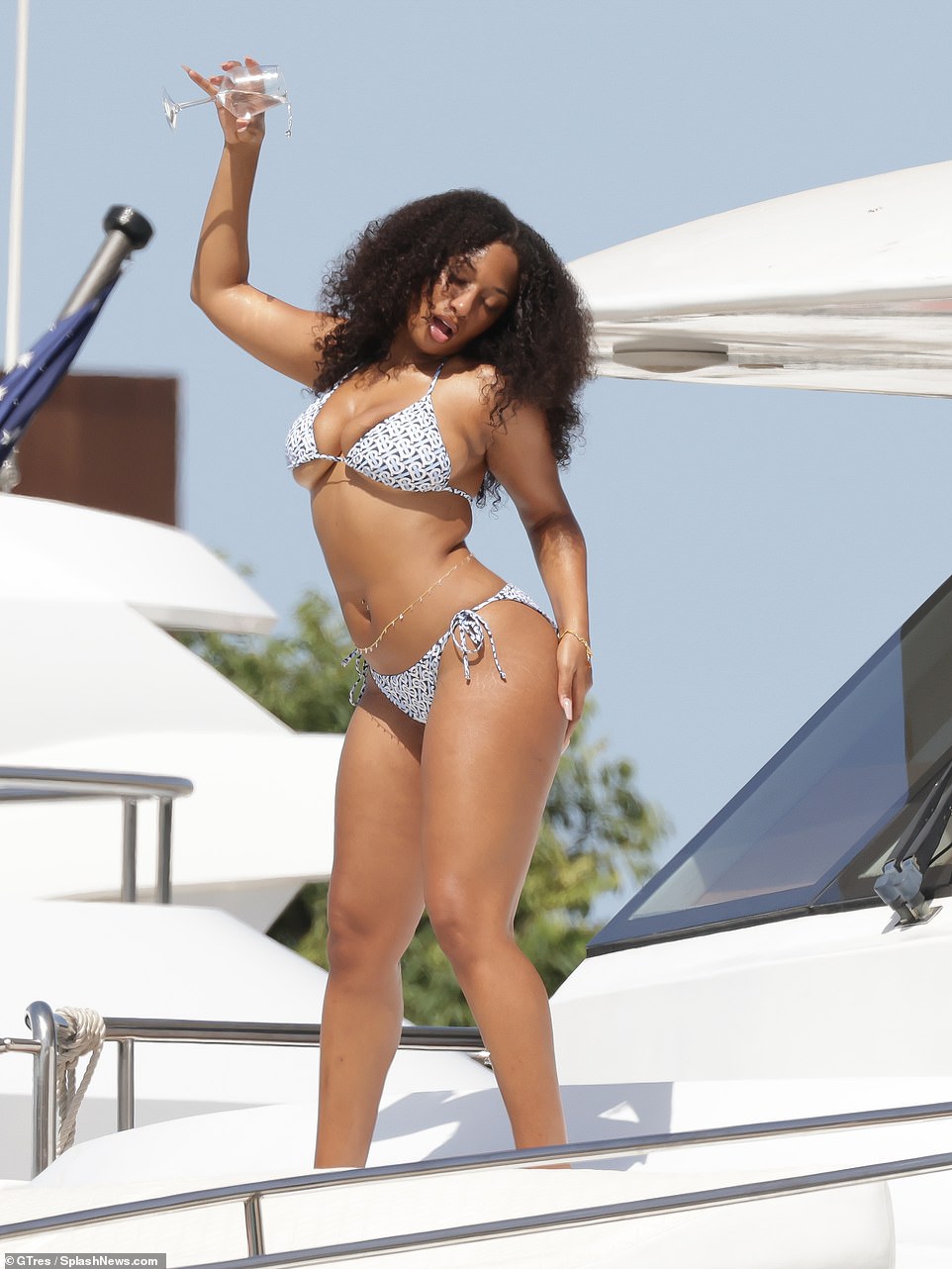 Hot Girl Summer! Megan Thee Stallion sizzles in a bikini as she enjoys yacht party with pals and packs on PDA with boyfriend Pardi

The sighting comes after the Houston rapper said this week that Tory Lanez should go to jail ahead of their court battle over claims he shot her in the foot.

Stallion appeared on the cover of the latest edition of Rolling Stone magazine as she talked candidly about the alleged incident, the aftermath, how she became ‘the villain’, and what she hopes the result of her upcoming court case will be.

Lanez, 29, – real name Daystar Peterson – was charged after allegedly shooting at Stallion as she left a SUV vehicle during a drunken argument in the Hollywood Hills on July 12, 2020. 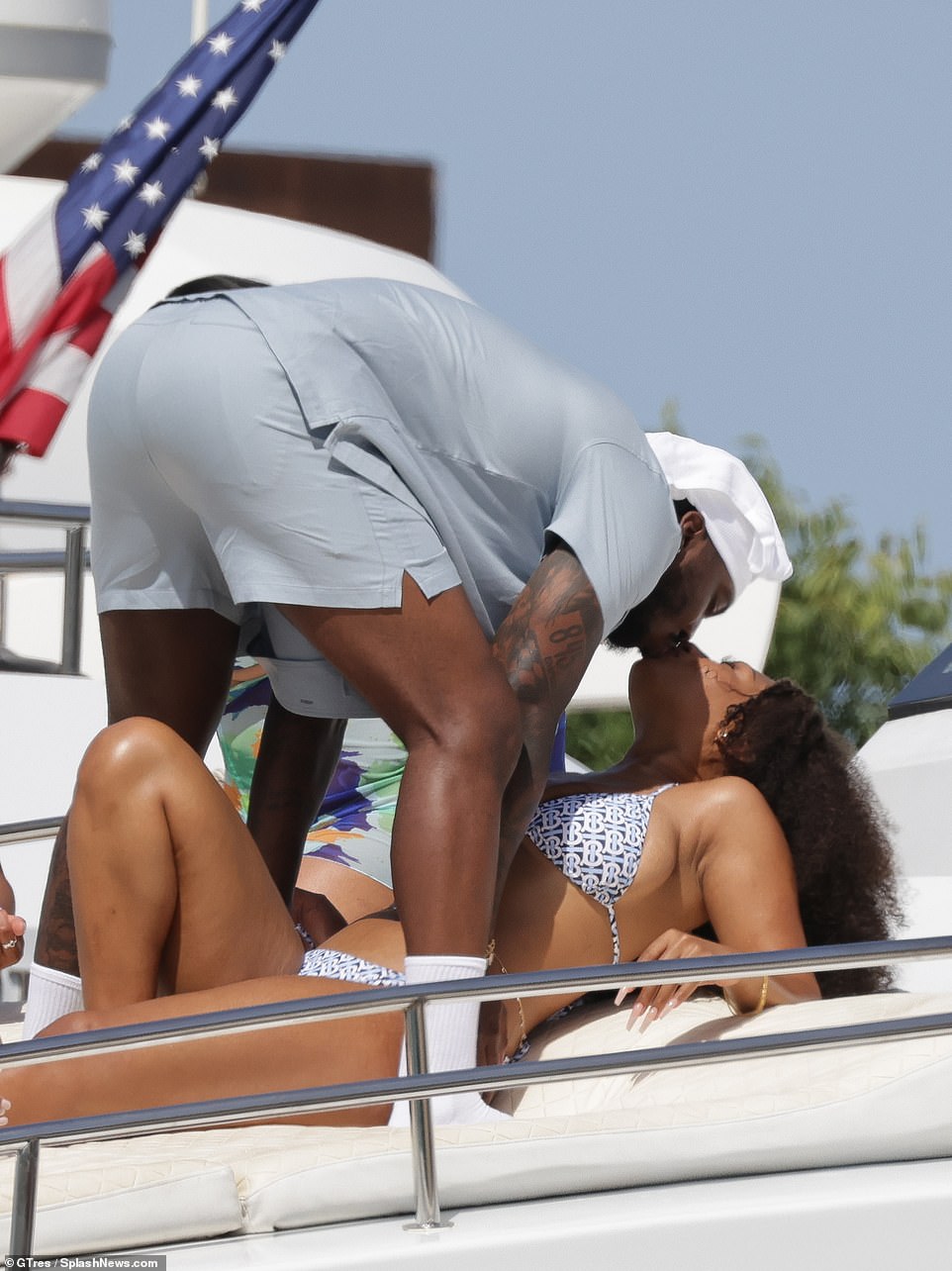 Smooch: Megan was seen packing on the PDA with her boyfriend, rapper Pardison ‘Pardi’ Fontaine 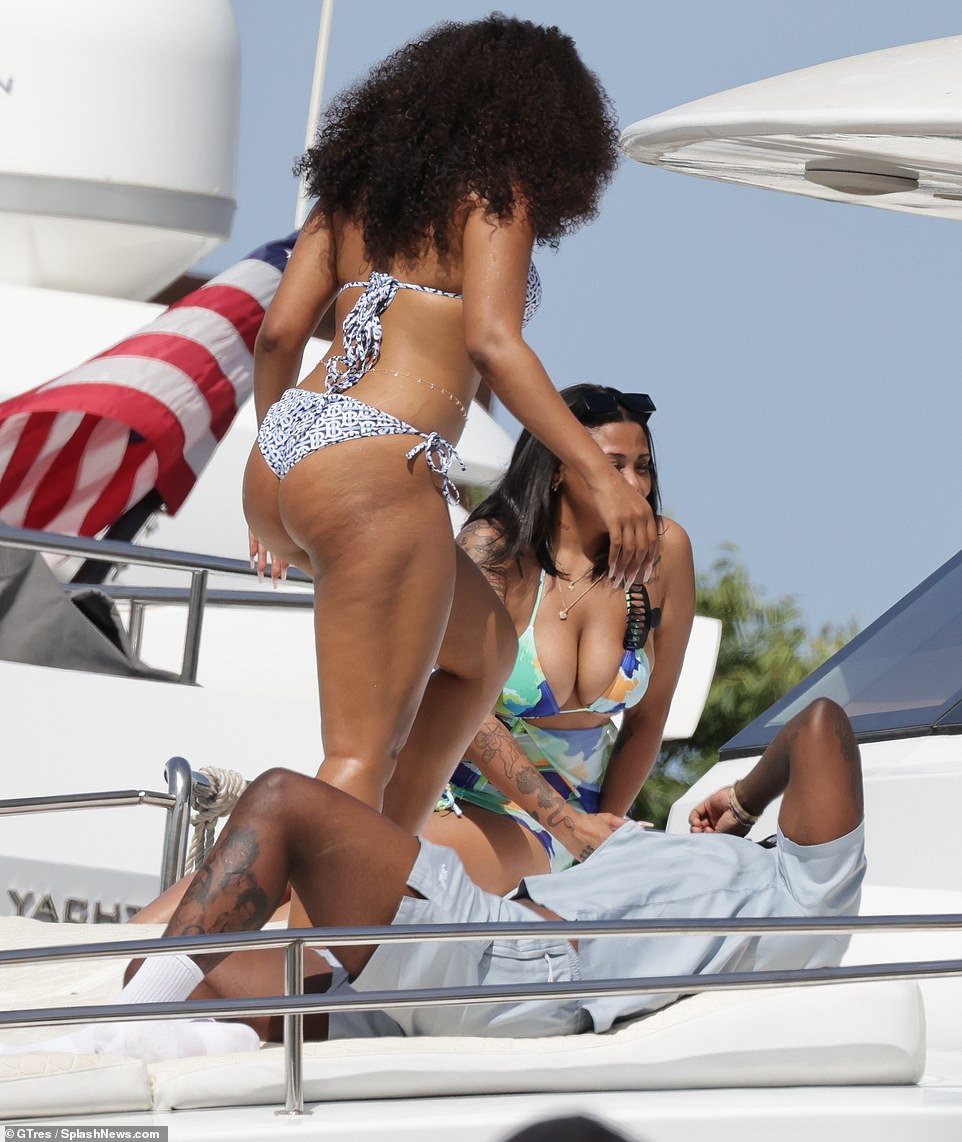 Lap of luxury: Megan shows off her bikini body as her rapper boyfriend Pardi relaxes on the yacht

She is set to face off against Lanez in September when the criminal case against him goes to trial as she told the publication: ‘I want him to go to jail. I want him to go under the jail. ‘

Lanez pleaded not guilty to the felony assault charge as well as felony possession of a loaded, unregistered firearm in November 2020.

The pair were rumored to have been dating at the time, but Stallion claimed in her previous op-ed for the New York Times that they were just friends.

Living her best life: The 27-year-old rapper showed off her sizzling bikini body in Ibiza on Friday, as she partied with pals on a yacht 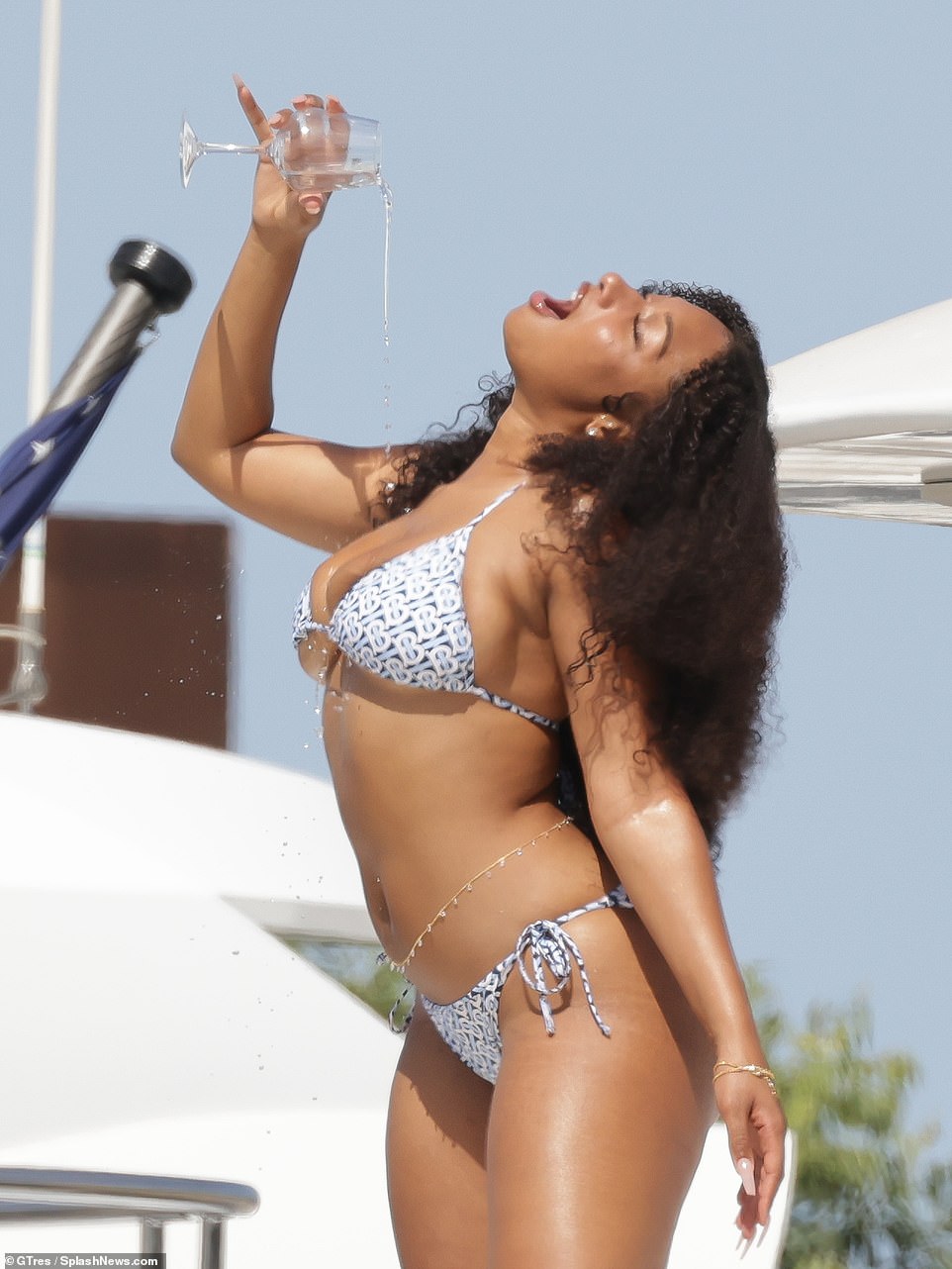 Cheers to the weekend! The rapper was certainly in the mood to party as she tipped her wine glass over herself

Stallion’s wounds are believed to have been caused by shrapnel in her feet and has initially claimed she sustained the injuries by stepping on glass.

In the Rolling Stone piece, Megan said she thought that they had a ‘real connection’ as they bonded over the mutual loss of their mothers.

She explained: ‘I thought he knew me. And I never would’ve thought he would’ve shot at me at all. 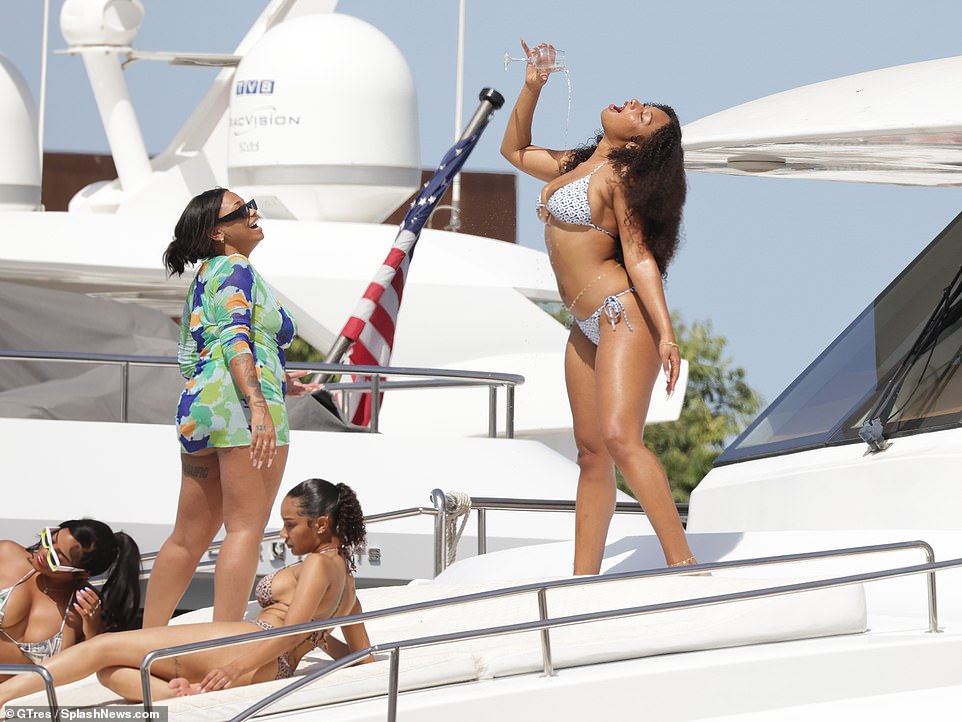 Party pals! The rapper appeared to be cheered and she larked about on the boat tipping her wine over herself 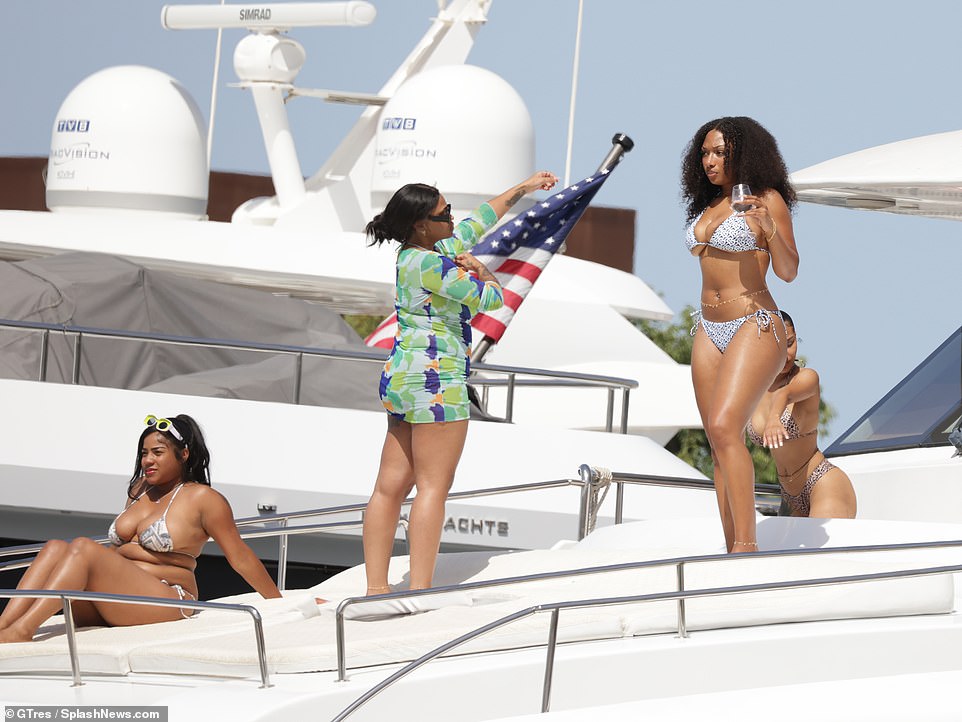 Time to relax: Megan has been busy releasing music and playing award shows this year 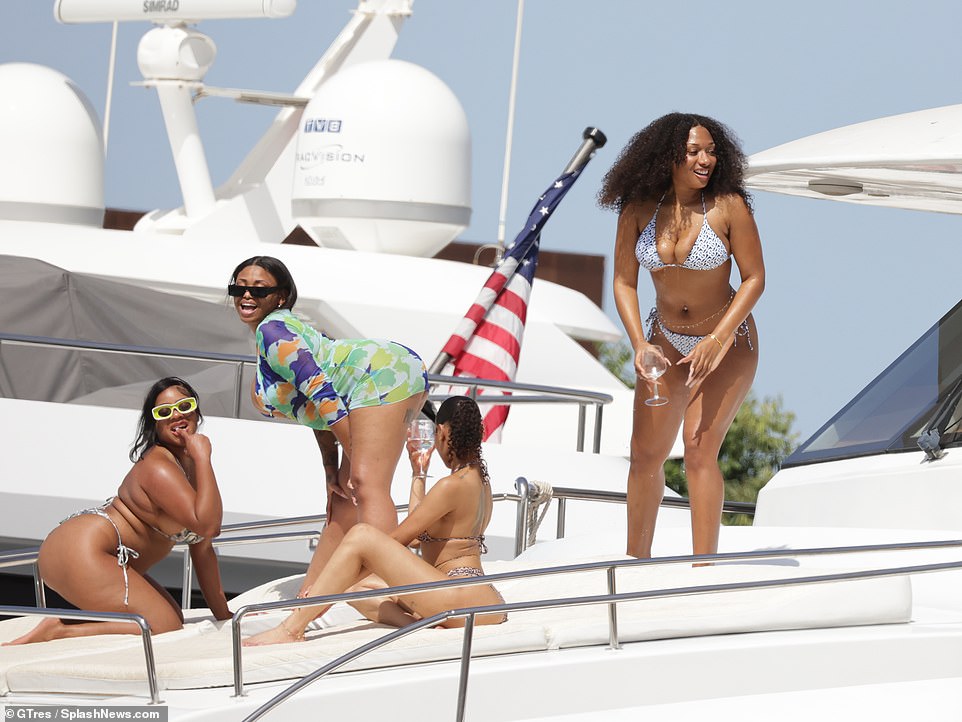 Posing up a storm: Megan and her pals appeared to be eager to show off their bikini bodies while on holiday

Megan detailed her painful recovery from the injuries she had sustained.

She explained: ‘What nobody knows is, I had to get the surgery the same night. I stayed in the hospital in California for maybe four days.

‘Then I was in New York for a while. Both of my legs wrapped up. I could not walk. I still have bullet fragments in my feet right now. I was very scared that I was not able to be Megan Thee Stallion no more. And I was f *** ed up. ‘

After that she began physical therapy in New York before traveling to Tampa, Florida where she was able to regain the ability to walk.

Megan also touched on the social media reaction to the case as many have discounted her version of the events that night in 2020.

She explained that she gives herself 15 minutes online a day but becomes frustrated when she is bombarded with messages of hate.

The rapper explained: ‘In some kind of way I became the villain. And I don’t know if people don’t take it seriously because I seem strong. I wonder if it’s because of the way I look. Is it because I’m not light enough? Is it that I’m not white enough? Am I not the shape? The height? Because I’m not petite? Do I not seem like I’m worth being treated like a woman? ‘

She said: ‘I feel like you’ve already tried to break me enough. You’ve already shot me. So, why are you dragging it out like this? Like, what else? Have you hated me this much the whole time and I didn’t see it? ‘

In April, Lanez was handcuffed in court during a hearing addressing felony assault charges in an attack on Stallion, after a judge found he violated a protective order put in place last year that prohibited the Canadian rapper from harassing the Savage hitmaker.

During the hearing in the Superior Court of Los Angeles County, Judge David V. Herriford ruled Lanez violated the order through a series of disparaging social media posts.

The Say It singer was subsequently restrained and taken into custody, with the judge setting his bail at $ 350,000 – a $ 100,000 increase from Lanez’s previous bail, which he posted late last summer. He had been free since then.

During the hearing, Herriford listened to almost an hour of arguments regarding Lanez’s social media activity.

Herriford said the tweets ‘seem to be clear messages’ directed at Megan, thus violating the protective order put in place by the judge more than a year ago, in February 2021. He was prohibited from contacting or harassing Megan, or sharing any developments in the case.

The order followed Lanez’s Instagram rant in October: ‘[Megan] knows what happened, I know what happened, and we know that what you’re saying and [that] the alleged things and the alleged accusations of my name is [sic] are not true. ‘

Prosecutors also pointed to a February tweet from Lanez’s friend, social media personality from DJ Akademiks, which said DNA found on the gun that shot Megan, 27, did not match that of Lanez.

The order followed Lanez’s Instagram rant in October: ‘[Megan] knows what happened, I know what happened, and we know that what you’re saying and [that] the alleged things and the alleged accusations of my name is [sic] are not true. ‘

Prosecutors also pointed to a February tweet from Lanez’s friend, social media personality from DJ Akademiks, which said DNA found on the gun that shot Megan, 27, did not match that of Lanez.

It is not the first time that Lanez had his bail raised for violating the protective order.

Last August, Herriford increased his bail from $ 190,000 to $ 250,000 for violating stipulations to stay away from Stallion.

He had made a surprise appearance at the Rolling Loud concert in Florida in March where she also performed, according to an article by TMZ.

At that hearing, Herriford said: ‘We have two high-profile celebrities named as the defendant and the alleged victim in this case,’ pointing out that ‘the last thing I think anyone wants’ is for social media to be used as evidence in the case.

After the infraction, Lanez’s bail conditions were modified by the judge to specifically prohibit Tory from attending events where Megan was present.

A new trial start date for the rapper – who pleaded not guilty to the felony assault charge as well as felony possession of a loaded, unregistered firearm in November 2020 – is currently set for September 14.

Lanez is accused of shooting at Megan’s right foot after she left a SUV during a fight in the Hollywood Hills on July 12, 2020.