Liz Truss last night launched her leadership bid with a promise to slash taxes and unite Conservatives in the Red and Blue Walls.

The Foreign Secretary, who has long brandished her low-tax credentials, is positioning herself as a traditional Tory candidate who can deliver on promises.

She is likely to be joined on the ballot paper by Home Secretary Priti Patel, who was last night still mulling over whether to run – despite several public endorsements from Tory MPs.

Miss Patel is thought to be fearful that the Right-wing vote could be split, leaving the party without a hardline Brexiteer in the final two.

Writing in the Daily Telegraph, Miss Truss said: ‘Under my leadership, I would start cutting taxes from day one to take immediate action to help people deal with the cost of living. 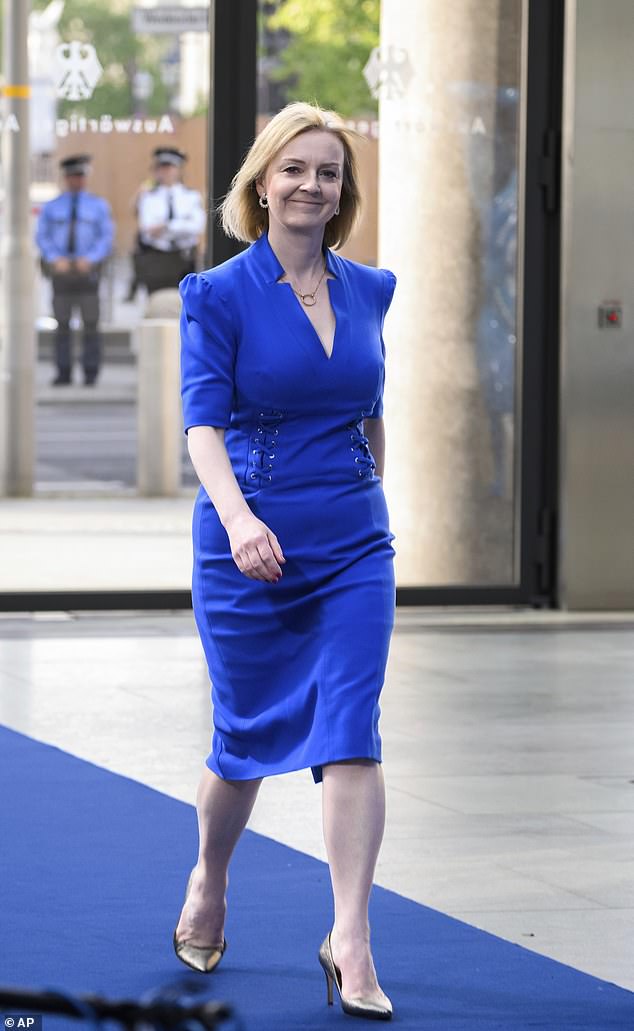 It is not right to be putting up taxes now. I would reverse the National Insurance increase that came in during April, make sure we keep corporation tax competitive so we can attract business and investment into Britain, and put the Covid debt on a longer-term footing.

‘I will get the private sector growing faster than the public sector, with a long-term plan to bring down the size of the state and the tax burden.’ She added that her plan was ‘built on a clear and long-standing conservative philosophy’.

A Tory source said last night: ‘If the Right united on the current numbers, the candidate would be in second place. Conversations and caucusing are only going to get them so far. There is a real risk they freeze themselves out of the race.’

Miss Truss is standing on a ticket to keep Boris Johnson’s 2019 electoral coalition together by holding key seats and bringing back disaffected voters.

Allies said the Foreign Secretary would be able to ‘hit the ground running’ with her Cabinet experience.

‘Now is not the time for someone who is untested,’ a campaign source told the Daily Mail last night. 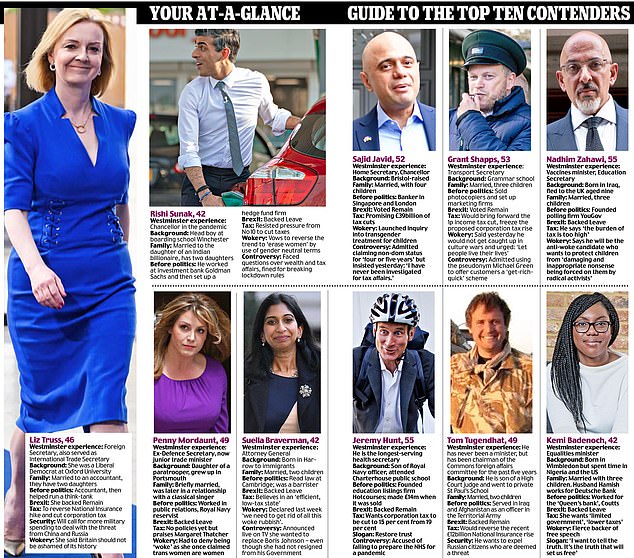 ‘Liz is the only one who has the combination of experience, conservative principles on the economy, and can unite the Red and Blue Walls.’ An ally added: ‘Liz keeps the 2019 Red and Blue Wall election coalition together, returns us to proper Conservative policy on the economy, and has vast experience and a great record of getting difficult things done.

‘She’s our best chance of turning things around before the next election.’ Several MPs had already announced their support for Miss Truss before her campaign was formally launched, including the Work and Pensions Secretary Therese Coffey.

In a tweet, she said: ‘She has helped lead the international response to Russia’s invasion of Ukraine, brokered dozens of post-Brexit trade deals that people thought would be impossible to do.’

Miss Patel was last night said to be coming ‘closer and closer to standing’ but was waiting until today to make a final decision. 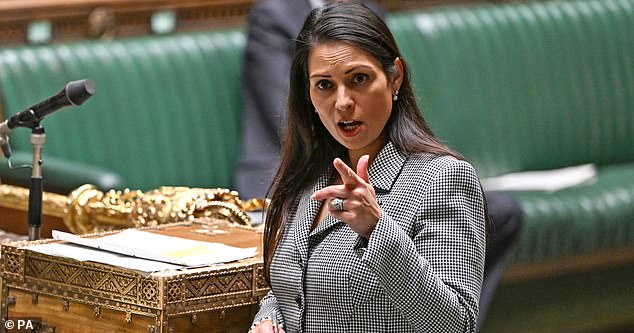 She is likely to be joined on the ballot paper by Home Secretary Priti Patel, who was last night still mulling over whether to run – despite several public endorsements from Tory MPs

An ally said: ‘She’s got the numbers to stand, and indications show she has more than others on the Right. It’s just now a question of whether they will unite and back her to go all the way or split the vote to lead to a coronation.

‘Many MPs are encouraging her to stand, people know it needs to be someone who is a committed Brexiteer that can actually unleash those benefits of Brexit and deal with the cost of living crisis.

‘Just look at the Rwanda policy – ​​now backed up by almost every leadership candidate, it shows she’s ready with innovative solutions to complex and controversial problems.’

Last night the European Research Group of Brexit-backing Tories were meeting to discuss how to maximize their chances of getting one of their supporters into the final two of the contest.

They fear that if an untested MP makes the final ballot – such as Suella Braverman – they could suffer the same fate as Andrea Leadsom and hand the leadership to Rishi Sunak.

For the next two weeks, the contest to succeed Boris Johnson is about just one thing – the race to sign up 120 Conservative MPs.

In public there will be high-blown rhetoric about cleaning up politics along with eye-catching promises. But behind the scenes at Westminster, a game of pure realpolitik is playing out.

Under Tory leadership rules, the 358 Conservative MPs will whittle down a bumper field of candidates to just two by the time Parliament rises for the summer on July 21. In simple terms, any candidate who can get 120 names is guaranteed a place in the final two.

Lavish promises, job offers, arm-twisting, threats and even blackmail will be deployed as the leading candidates vie for the support of colleagues. Lies will be told. 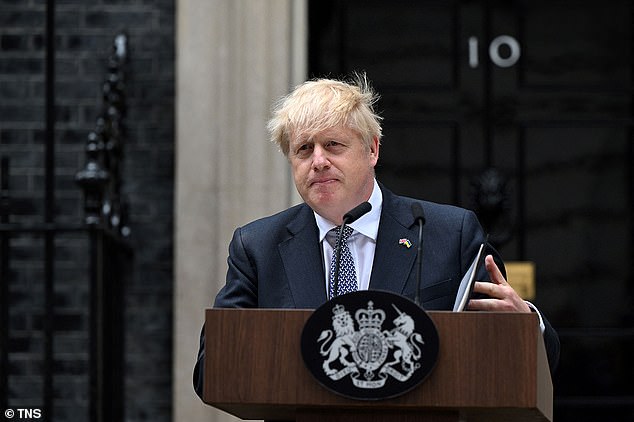 For the next two weeks, the contest to succeed Boris Johnson is about just one thing – the race to sign up 120 Conservative MPs

Already, the race appears to have an early leader. As of last night, Rishi Sunak has the support of 28 MPs, well ahead of Penny Mordaunt on 19 and Liz Truss on 12. The former chancellor is said to have enlisted one-time chief whip Sir Gavin Williamson to deploy his unique powers of persuasion in his cause.

Sir Gavin previously performed the role for Theresa May and Boris Johnson, steering them to the final of the last two leadership contests. In return he is hoping for what would be a third act in the Cabinet, having been eventually sacked by both of those he helped win the top job.

The former chancellor’s early dominance means rivals will need to make the case that they are best placed to stop him when the contest enters its second phase – in which Conservative Party members make their choice. They will be aided and abetted by allies of Boris Johnson who privately accuse Mr. Sunak of ‘treachery’ over his role in the PM’s downfall.

Miss Truss let it be known that she would ax her rise in National Insurance before declaring herself a candidate. Allies say she will offer a low tax alternative to a chancellor for whom cutting the tax burden always seemed to be jam tomorrow. 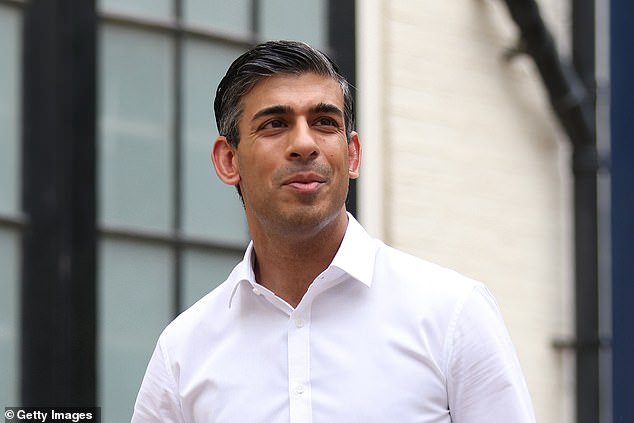 Already, the race appears to have an early leader. As of last night, Rishi Sunak has the support of 28 MPs, well ahead of Penny Mordaunt on 19 and Liz Truss on 12

‘Rishi has completely f***ed up our economic strategy,’ an ally of the Foreign Secretary said. ‘Where did this idea come from that tax cuts would be inflationary but putting £37billion into giveaways isn’t?’

Sajid Javid pledged yesterday to scrap the NI hike – a move that raised eyebrows in Westminster where, as health secretary, he is understood to have argued for a bigger hike last year. Mr Sunak’s competition in the final two is expected to come from Miss Truss, Mr Javid, new Chancellor Nadhim Zahawi, trade minister Penny Mordaunt and former soldier Tom Tugendhat.

Of these, only Mr. Zahawi and Miss Mordaunt joined Mr. Sunak in campaigning for Brexit in 2016 – a factor that is likely to weigh heavily with MPs aware of the overwhelming support for Brexit among Tory members.

Both had tricky starts to their campaigns. Mr. Zahawi, who has the backing of part of the Tory machine, did not impress some potential supporters by publicly praising the PM last week and then calling for him to resign the following day. 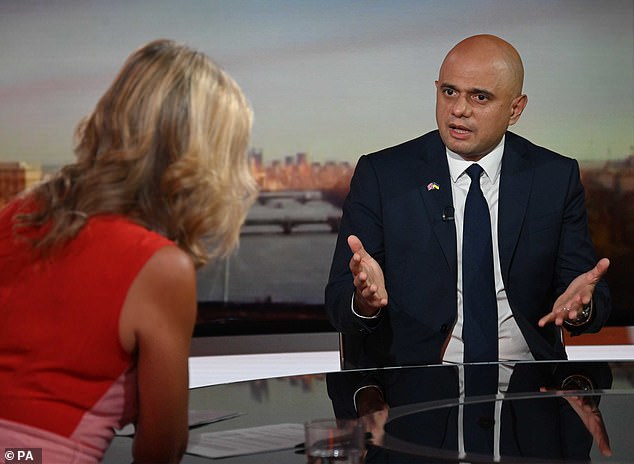 Sajid Javid pledged yesterday to scrap the NI hike – a move that raised eyebrows in Westminster where, as health secretary, he is understood to have argued for a bigger rise last year

Miss Mordaunt, with admirers across the party, found herself embroiled in a trans rights row. Mr. Tugendhat could be well placed if Tory MPs decide they need a change candidate. But his Remainer status is a handicap to victory.

There are other interesting candidates. Attorney General Suella Braverman has made a bold pitch to be the standard bearer of the Tory Right. But she may struggle to attract support. Equalities minister Kemi Badenoch made one of the most interesting pitches to date and could generate excitement among the 2019 intake of MPs. But her lack of experience is a hurdle.

Both Miss Truss and Mr. Javid, on the other hand, have Cabinet experience to spare. Miss Truss has a wide support base in the parliamentary party and the backing of donors. Her campaign launch this week is set to be a critical moment in the race.

Team Sunak are, rightly, not complacent. Early favorites have blown up before – as Mr. Johnson discovered in 2017.

And this is the most open contest for many years. It is all to play for.