Older people who live alone may be more likely to develop dementia, a major study has found.

Socially isolated adults were 26 per cent more likely to develop the memory-robbing condition.

Experts from the universities of Cambridge, Warwick and Fudan in China described social isolation as a ‘serious yet underappreciated public health problem’.

As well as living alone, it also applies to people who receive few visits from friends and family or do not engage in social activities.

Social isolation has for decades been a problem among elderly people. But Covid intensified this.

Professor Edmund Rolls, a neuroscientist from the University of Warwick, said it was technically different to loneliness.

The study only shows social isolation, not loneliness, is an independent risk factor for getting dementia, he said.

The team called for communities and the Government to ‘take action’ to ensure older people have regular interactions with others. 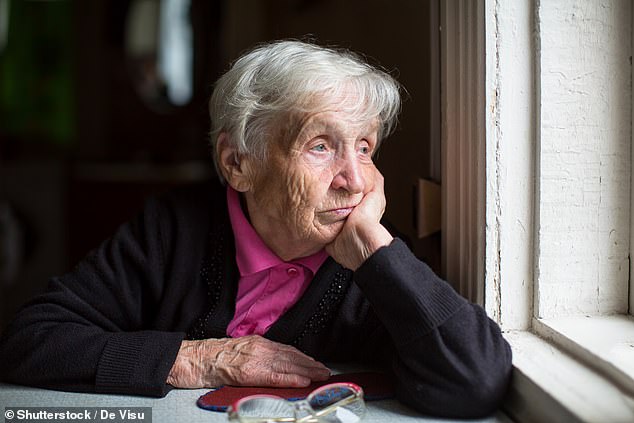 Social isolation causes memory loss in older age and may lead to dementia, research has shown yet again. Stock photo of a lonely elderly woman

The researchers looked at MRI scans and results from thinking and memory tests of Britons in the UK Biobank – a database of half a million patients.

The participants, who were aged 57, on average, at the beginning of the study, also answered questions on their interactions.

People were considered socially isolated if they answered no to two or more of the questions.

These included whether participant lived with others, if they had visited with friends or family at least once a month and if they participated in social activities, such as clubs, meetings or volunteering, at least once a week.

The participants were monitored for nearly 12 years before the pandemic.

The results, published in the journal Neurology, show a tenth of the cohort (41,886 people) reported being socially isolated. And six per cent (29,036 people) felt lonely.

Over the course of the study, 4,998 individuals went on to develop dementia.

Around 1.55 per cent of socially isolated people developed dementia, compared to 1.03 per cent of the rest.

After adjusting their results to account for factors including age, alcohol intake and smoking, as well as conditions including depression, they found the group were 26 per cent more likely to get dementia.

Follow-up research, an analysis of brain scans of 30,000 of the same participants, showed socially isolated individuals had lower volume in the brain’s gray matter in regions involved with learning and thinking.

The researchers did not examine how reductions in gray matter could be triggered by social isolation.

But lower levels are thought to be a marker of a decline in cognitive function.

Having fewer contacts with others has also been linked with higher risk of stroke and dying early – two other factors thought to raise the risk of dementia.

More than 850,000 Britons are living with dementia, while 6.5million Americans are suffering from the condition.

Professor Jianfeng Feng, a computational biologist from the University of Warwick, said ensuring older adults are not socially isolated will reduce the risk of developing dementia.

‘During any future pandemic lockdowns, it is important that individuals, especially older adults, do not experience social isolation,’ he said.

Professor Barbara Sahakian, a neuroscientist at the university, urged the Government and communities to ‘take action’ to ensure older people ‘have communication and interactions with others on a regular basis’.

WHAT IS DEMENTIA? THE KILLER DISEASE THAT ROBS SUFFERERS OF THEIR MEMORIES

Dementia is an umbrella term used to describe a range of progressive neurological disorders (those affecting the brain) which impact memory, thinking and behavior.

There are many different types of dementia, of which Alzheimer’s disease is the most common.

Some people may have a combination of types of dementia.

Regardless of which type is diagnosed, each person will experience their dementia in their own unique way.

Dementia is a global concern but it is most often seen in wealthier countries, where people are likely to live into very old age.

HOW MANY PEOPLE ARE AFFECTED?

The Alzheimer’s Society reports there are more than 850,000 people living with dementia in the UK today, of which more than 500,000 have Alzheimer’s.

It is estimated that the number of people living with dementia in the UK by 2025 will rise to over 1 million.

In the US, it’s estimated there are 5.5 million Alzheimer’s sufferers. A similar percentage rise is expected in the coming years.

As a person’s age increases, so does the risk of them developing dementia.

Rates of diagnosis are improving but many people with dementia are thought to still be undiagnosed.

IS THERE A CURE?

Currently there is no cure for dementia.

But new drugs can slow down its progression and the earlier it is spotted the more effective treatments are.