Liam Gallagher couldn’t resist taking a swipe at estranged brother Noel as he dismissed notions he would be nostalgic over returning to Knebworth for gigs as a solo artist.

The former Oasis rocker, 49, played iconic gigs to 250,000 fans at Knebworth with the Britpop band back in 1996, but said this outing is purely ‘for fans’ as Oasis ‘aren’t getting back together any time soon’ – referencing his famous feud with brother Noel, 55.

He told The Sun: ‘Noel’s had his f ***** g chance to get the band back together and he doesn’t want to. So, I thought, if he doesn’t want to do it, then I’m gonna have to do it and bring it to the people. And that’s EXACTLY what I’m doing. 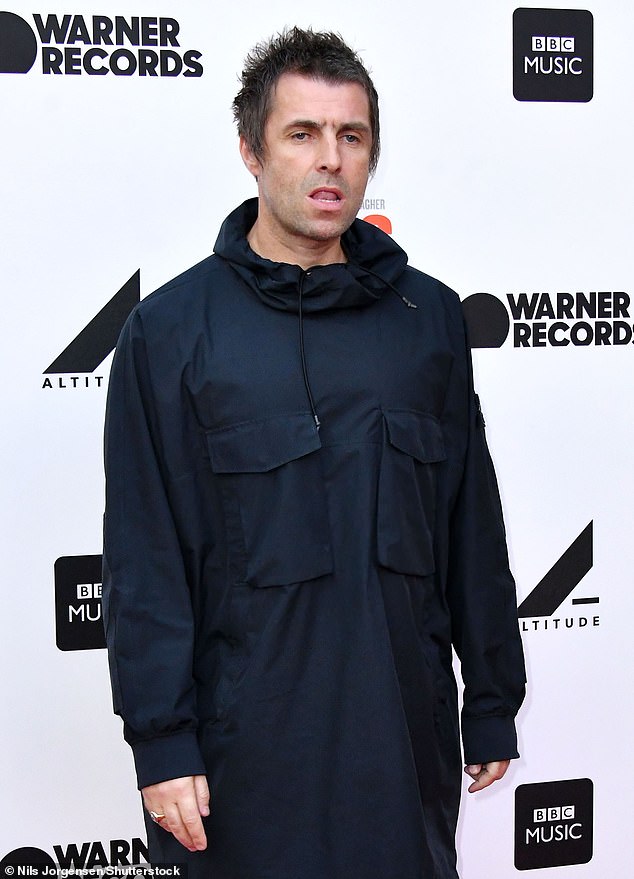 Looking back in anger: Liam Gallagher couldn’t resist taking a swipe at estranged brother Noel as he dismissed notions he would be nostalgic over returning to Knebworth for gigs as a solo artist (Liam pictured 2019)

‘I could have Sylvester Stallone on stage and Esther Rantzen playing bass and it wouldn’t matter. It’s about me and the fans. The reason I’m doing Knebworth again is because of the fans – that’s what the people want and I’m respecting them.

‘Oasis ain’t getting back together anytime soon, so, we’re doing it for them. Hopefully we can deliver a good gig and have a good weekend. ‘

The star – who is considering having a double hip replacement because he suffers from arthritis – said he is ‘f ***** g buzzing’ after having steroid injections ahead of the June 3 and 4 gigs, marking 25 years since Oasis took to the stage.

The Wonderwall singer also likened himself to ‘Wayne Sleep and Louis Spence’ due to running around preparing for the gigs.

Oh dear: The former Oasis rocker, 49, played iconic gigs at Knebworth with the Britpop band back in 1996, but said this outing is purely ‘for fans’ as Oasis ‘aren’t getting back together any time soon’ (Noel and Liam pictured 2009)

Discussing his bandmate Paul Arthurs, known as Bonehead, who was recently diagnosed with tonsil cancer and will miss out on the gigs, Liam said it was a ‘huge shock’, with Arthurs undergoing radiotherapy and ‘keeping his head down.’

Liam went onto discuss his Twitter spat with Jamie Carragher, which erupted when Liam tweeted ‘What are you saying carra you (bell emoji) end’ following Manchester City’s Premier League win.

However, Carragher wasn’t taking Gallagher’s dig lying down, and responded by claiming City will never win the Champions League and the Beatles are better than Oasis.

He replied: ‘I’m saying you’ll never win the Champions league & Oasis are s *** e compared to the Beatles. That work ?? ‘

The singer wasn’t done as he lashed out at Carragher’s reply and even brought Gary Neville into the argument. 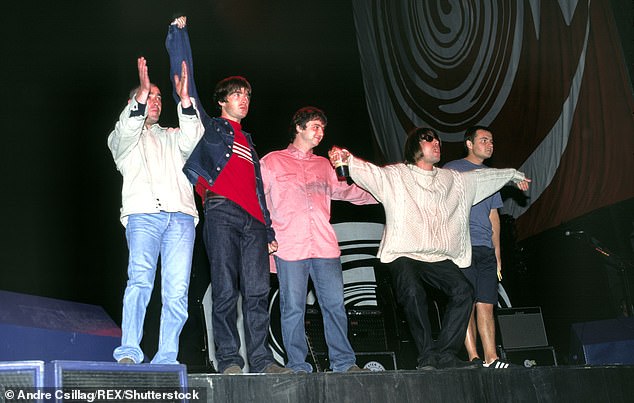 Back then: – Paul Arthurs, Noel Gallagher, Paul McGuigan Liam and Alan White are pictured at the Knebworth gig in August 1996

‘Eh carra you got s *** banter for a scouser f *** ing hell la you been hanging out with Neville too long oasis p *** all over the Beatles how many times did they do knebworth.’

‘Gerrard can kiss my a *** as well as the bumbaclart his old clubs smash our bus up. MCFC Champions. ‘

He soon followed that by tweeting ‘f *** off slippy Gerrard.’

Liam admitted he ‘loved every minute’ of the spat and that it was just ‘banter’. He also avowed he would ‘never get cancelled’ because people like his humor.

The interview comes after Liam admitted him is now having second thoughts about his previous surgery stance.

Speaking to Zoe Ball on The Radio 2 Breakfast Show, he said: ‘Hips man, they’re both bashed up, but I just went to get these injections the other day actually, so now I am buzzin’ mate, I’m like Louie Spence ‘ 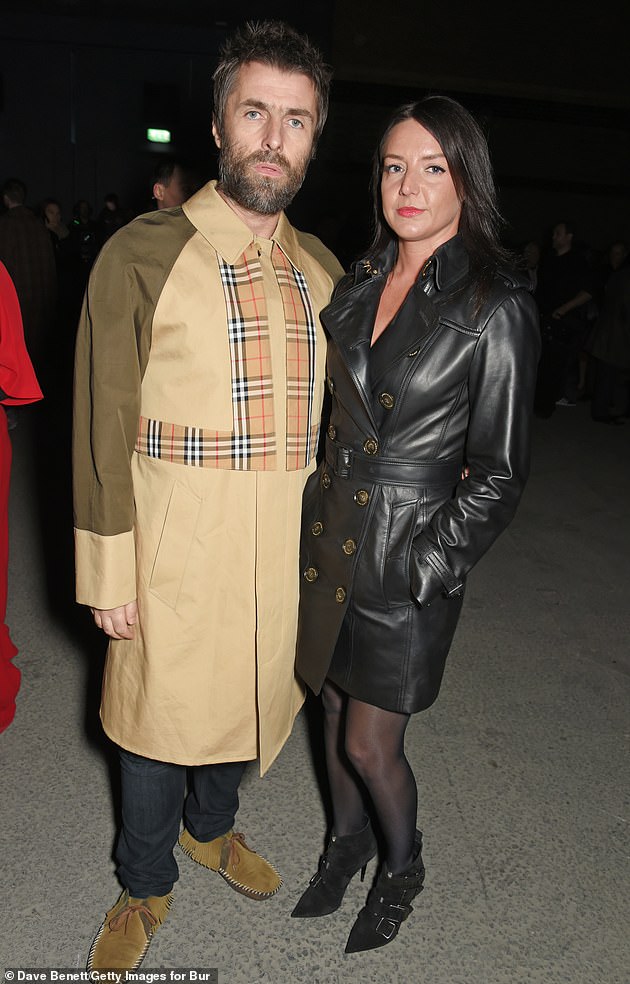 Help: The singer recently joked he’d like his fiancée Debbie Gwyther (pictured in 2018) to act as his carer and push him around in a wheelchair if he has a double hip replacement

‘I might go and ruin my career at Knebworth and go start doing some high kicks like Jagger, and everyone’s going like that,’ I want my money back, we only come to see him stand still

‘But I’m going to have to have the operation next year maybe, but can’t be getting it done before Knebworth

The star admitted he would rather ‘be in pain’ and use a wheelchair than have the operation.

Last month he told MoJo Magazine: ‘My hips are f *****… I’ve got arthritis, bad. I went to get it checked and my bones are mashed up.

Hip replacement surgery sees the damaged hip joint replaced by a prosthetic impact and has a recovery time of around six weeks.

‘The lady was going’ you might need a hip operation, a replacement ‘- no way. You’re all right… I think I’d rather just be in pain, which is ridiculous, obviously. I know that – just get them fixed.

He continued: ‘But it’s also the stigma, saying you’ve had your hips replaced… I can’t sleep at night for the pain, tossing and turning.

‘So I’m on the herbal sleeping tablets and they’ve saved my life. One of them seven hours out – no pain, nothing.

The Wall Of Glass singer – who is engaged to Debbie Gwyther – was aware of the benefits of the commonplace procedure, he’s rather put up with the pain than run the risk of something going wrong.

‘I don’t mind a little pain. Keeps you on your toes. Pain is OK… No, no I can’t. Just the thought… they have to break your hips

Liam insisted that he is going to keep doing what he wants until he dies as he said he isn’t afraid of death.

He was told he had arthritis in 2019, just two years after being diagnosed with Hashimoto’s disease, which causes the thyroid not to make enough hormones.

‘I asked the lady what the downside was and she responded’ you might die in surgery. It’s one in a million chance ‘

‘F *** off. I’m not going to crisp it having my hip cracked, thank you. I’d rather be in a wheelchair with Debbie pushing me around, like Little Britain. ‘ 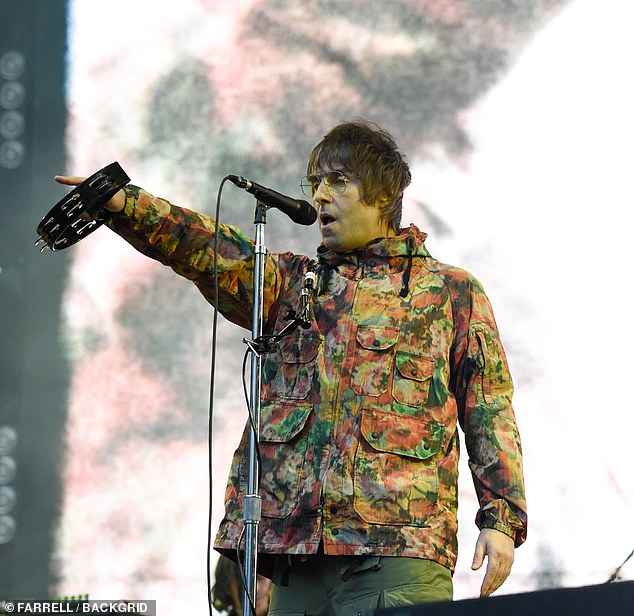 Some Might Say: The Wonderwall singer also likened himself to ‘Wayne Sleep and Louis Spence’ due to running around preparing for the gigs (pictured June 1)