Yet this seemingly innocuous home-made little stick has, she claims, given her back the speech and mobility she lost after being diagnosed with Parkinson’s disease in 2002, just before her 40th birthday.

Unable to speak without stuttering, to walk, drive or even remain steady on her feet, Sandra’s once busy and lively world was demolished by the disease.

Yet two decades on, and after two years of intensive effort developing the technology itself, Sandra is convinced her creation – called Eye Guide MC – can help thousands like her afflicted by the incurable condition.

‘My tremors have gone, I don’t slur my speech and I have balance – all the things that used to make my life such a struggle,’ says Sandra, 59, a former payroll clerk. 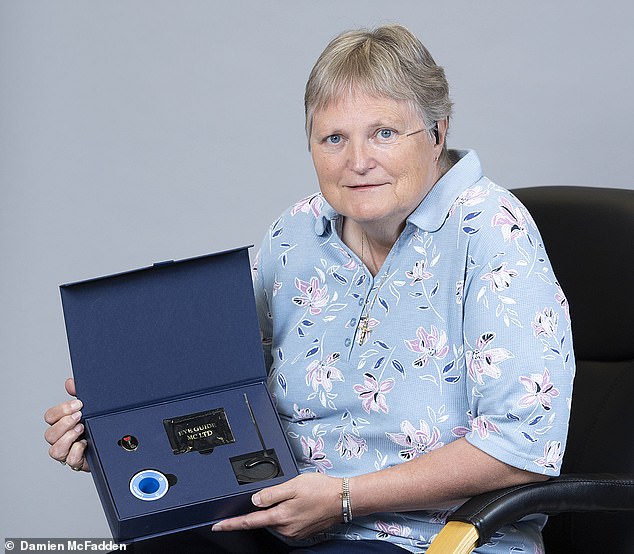 Unable to speak without stuttering, to walk, drive or even remain steady on her feet, Sandra’s once busy and lively world was demolished by the disease

Within seconds of putting the device on, she claims, her tremors vanish.

The theory behind Eye Guide MC is remarkably simple – as is its appearance. It resembles a Biro pen, one end of which is stuck to a hearing aid-style gadget worn on the ear, while the other sits in the peripheral vision (the part of our sight that allows us to see objects to the side without having to move our eyes or heads), so the eye sees only the very tip of it.

This, claims Sandra, enables the brain to pick up new signals from the eye that stimulate the basal ganglia, the part of the brain that controls movement.

But can a small piece of wire – with no plugs or batteries and no clinical trial data to back it up – really have such a life-changing impact on this truly debilitating illness?

Parkinson’s affects 145,000 people in England alone and cases are rising because we are living longer.

It develops when, for reasons which remain a mystery (ageing seems to be a risk factor, as does family history of the disease), nerve cells called neurons in the basal ganglia become damaged or die, reducing levels of a brain chemical called dopamine – vital for controlling body movement.

This leads to tremors so bad that sufferers often struggle to do simple tasks, such as hold a cup. They may also experience ‘freezing’ – a temporary, involuntary inability to move, which makes the feet feel as if they are glued to the floor. 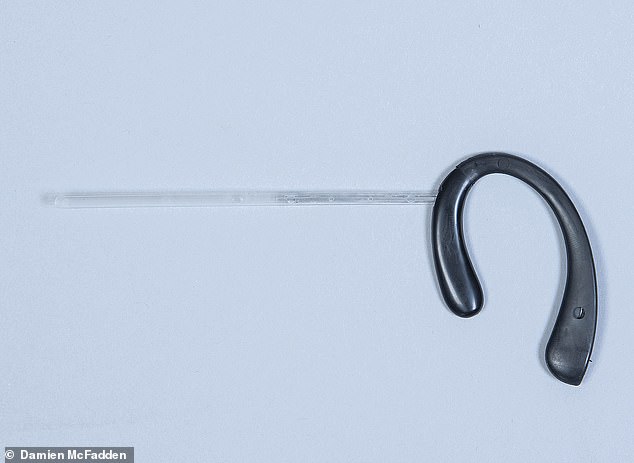 The theory behind Eye Guide MC is remarkably simple – as is its appearance. It resembles a Biro pen, one end of which is stuck to a hearing aid-style gadget worn on the ear, while the other sits in the peripheral vision (the part of our sight that allows us to see objects to the side without having to move our eyes or heads), so the eye sees only the very tip of it 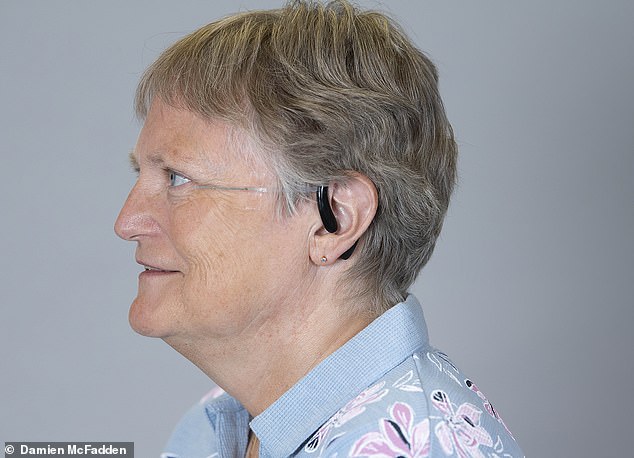 Sandra and Chris patented the device and found a local manufacturer to produce it from her prototype, making it from stainless steel and recycled plastic. It now sells for £ 995

There is currently no cure for Parkinson’s and patients take medication to try to stop the shaking, stiffness and speech problems it causes.

Sandra first developed tremors in the fingers on her right hand and her right leg in 2001.

But the neurologist she was referred to doubted it was Parkinson’s because she was still quite young – just 38 – and instead blamed anxiety.

Only after her symptoms worsened over the following 12 months was it finally confirmed that she did have Parkinson’s.

Sandra, who lives in Spalding, Lincolnshire, with her husband, Chris, 65, says: ‘I was both relieved and devastated.

‘Finally, I knew what had been giving me so much trouble. But on the other hand I was being told that I had an incurable and progressive illness that was likely to take away all my independence. So the prospect was awful. ‘

She was prescribed a drug called Sinemet, which increases levels of dopamine.

It worked for several years, allowing Sandra to speak and walk normally. But her symptoms then began to worsen – for some sufferers the drug’s effects wear off after a couple of years.

Sandra says: ‘Every day was a struggle. I was finding it so hard to walk in a straight line that I ended up in a wheelchair having developed what’s known as the Parkinson’s shuffle.

‘Chris and I had previously had such an active life. We were members of a motorbike club and loved going out.

‘And, although he was marvellous and did what he could, I was struggling physically and mentally. There were days when I couldn’t get my words out and had to write everything down. ‘

But then came a breakthrough. One day, as Sandra messed with a little knitting marker (used to mark the end of a row in knitting), she clipped it on her glasses for convenience – and immediately noticed the tremor in her arms subsided.

‘I began to wonder if I could alter messages to my brain by simply placing something in my peripheral vision,’ she says.

‘I’ve always enjoyed inventing things – I made a weighted brace for my arm to try to control the tremors. So I started fiddling with bits of wire and weights and placing it on the left side of my glasses.

‘I found when I had a certain weight of wire – which got the wire in a specific spot by my eye – it calmed the tremors down and helped my speech.

‘It took a good two years of messing around to get it right, but since no medication was making me feel better, I had nothing to lose.’

Sandra and Chris patented the device and found a local manufacturer to produce it from her prototype, making it from stainless steel and recycled plastic. It now sells for £ 995.

It is just one example of the various devices that have been marketed to help with the symptoms of Parkinson’s, says David Dexter, a professor in neuropharmacology at Imperial College London and scientific director to the charity Parkinson’s UK.

There are also, for example, shoes that shine laser beams on to the floor to provide a visual cue for Parkinson’s patients to keep on walking when they ‘freeze’ and cannot move voluntarily. 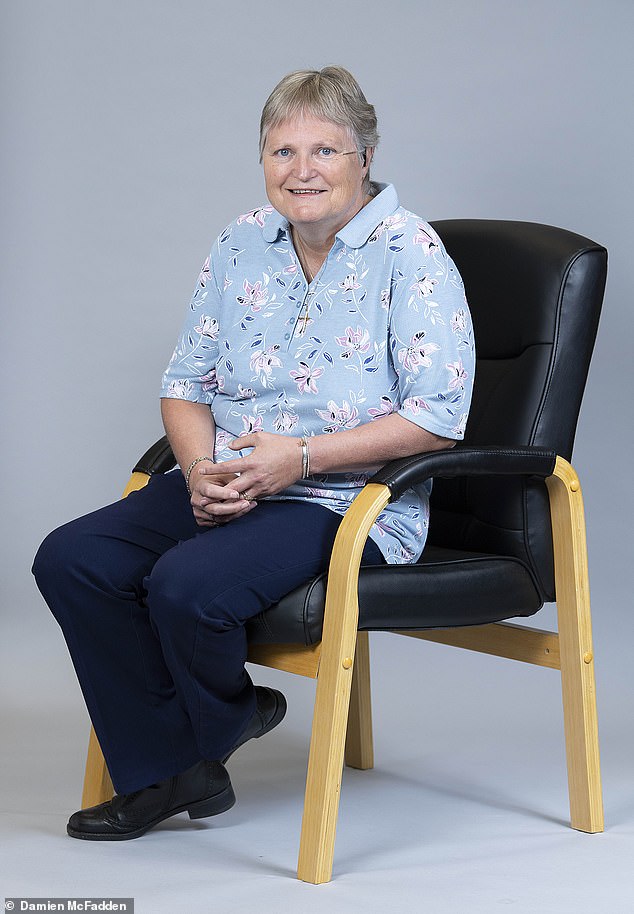 More than 100 people have so far bought an Eye Guide MC after being assessed by Sandra, who says that, after four years of fitting the device and 20 years of visiting neurologists, she does not need a medical expert on her team to decide if patients need the gadget

‘But the fundamental issue is whether there is any clinical robustness,’ says Professor Dexter.

‘Eye Guide MC seems a simple device but there’s little explanation of how it might help the person connect with the basal ganglia.

‘How does something in your peripheral vision help control a tremor?

‘If anything, my concern is that this is something that sits in the peripheral vision, and one of the biggest problems in later stages of Parkinson’s is maintaining balance – so this could, in fact, be a distraction.’

He adds: ‘It might also aggravate hallucinations, which are quite common in the later stages of Parkinson’s.

‘However, in a carefully monitored situation there is certainly no harm in trying it.’

Parkinson’s UK did provide Eye Guide MC with early-stage support with the patenting process and getting CE safety mark approval, but says it does not endorse the product since it has not been the subject of successful clinical trials.

In addition, it says, there are no papers published so far showing peripheral-vision devices work.

But more than 100 people have so far bought an Eye Guide MC after being assessed by Sandra, who says that, after four years of fitting the device and 20 years of visiting neurologists, she does not need a medical expert on her team to decide if patients need the gadget.

She says the cost reflects the overheads of running a clinic for testing people, as well as the manufacturing process.

A clinical trial with Lincoln University has recently been given the go-ahead, once funding is secured.

In the meantime, while the search for better drugs goes on, Sandra is determined to try to help more patients.

She says: ‘I’ve not cured Parkinson’s, but I’ve created a way to control it. A way to regain the independence we so desperately want. ‘

Toppers to turbo-charge a healthy salad

Give your salads a nutritional boost with a ready-made ‘topper’. Dietitian Ruth Kander, of the Fleet Street Clinic in London, selects four of the best (we tasted them). 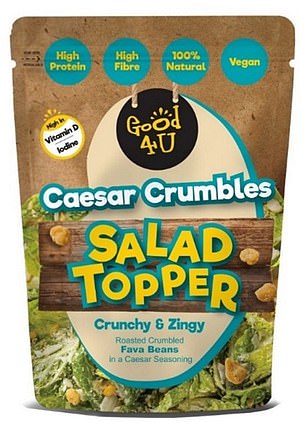 This is made with roasted fava beans tossed with Caesar-flavor seasoning made from kelp, yeast extract, lemon juice and dried mushrooms.

You’ll get 7g of muscle-building protein (slightly more than a boiled egg) and just over a tenth of your daily fiber in the recommended 30g serving, thanks to the beans.

It will also provide a useful amount of vitamin D, plus 42 per cent of your daily recommended dietary allowance (RDA) of iodine (used to make thyroid hormones, key for metabolism). 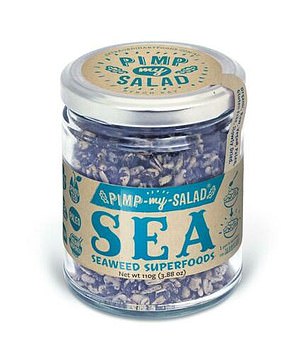 This is a dried mix of sprouted sunflower seeds and sea vegetables flavored with wasabi, tamari (soy sauce) and plum vinegar.

The high sunflower seed content is a useful source of heart-healthy unsaturated fats, vitamin E and a range of minerals.

The recommended two-teaspoon serving will add small but worthwhile quantities of nutrients to your meal. 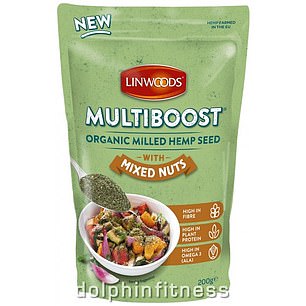 Hemp seeds are a good source of fiber, omega 3 and omega 6 (for heart health) – and the 25g recommended portion provides 16 per cent of your daily vitamin E.

The cashews and almonds in this add a boost of minerals such as copper (33 per cent of your RDA), needed for red blood cell formation. 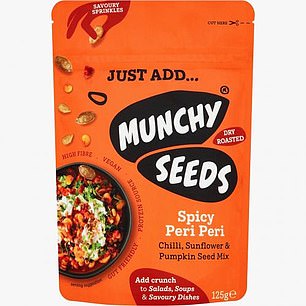 This is a mix of seven seeds, quinoa and millet; a variety of plant ingredients is good for gut health.

This mix also contains useful minerals; a 25g portion provides 23 per cent of your daily vitamin B1 (important for cell growth and function), 19 per cent of the phosphorus RDA (for strong bones) and 11 per cent of your iron daily needs, plus 5g of protein.

High in calories, but powerfully flavored, so a little goes a long way.