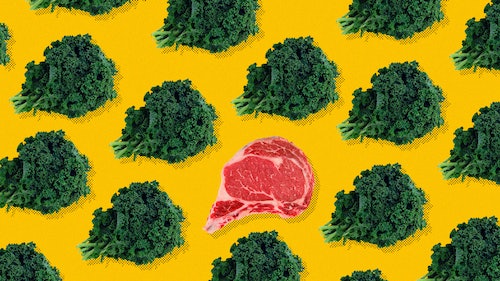 My first stint as a vegetarian lasted all of maybe a week. As a teenager, I decided I was done with meat. When I informed my mom, she took it in stride, telling me that was fine by her, but she wouldn’t be making any special meals for me. I stuck with it for just a matter of days before I gave up and ate whatever it was she was serving.

If you’d asked me at any point in the intervening years if I would try being a vegetarian again, I probably would have told you no (I was a cheeseburger connoisseur in my early college years). However, about four years ago, I decided to give up eating meat and poultry. My reasons for going pescatarian (and eventually 99-percent vegetarian) were tied to my concerns about climate, but it turned out that I really enjoyed the plant-based lifestyle, and my husband did too. Eating mostly vegetarian is an easy way to make sure we eat our daily allotment of vegetables and our diet is definitely healthier overall. I’ve also greatly expanded my recipe repertoire, diving deep into Indian, Thai, and Japanese cuisine. Plus, I never wake up in the middle of the night regretting a greasy hamburger I ate at a barbecue. However, our son (even back then at just 2 ½) was a very enthusiastic carnivore.

When I decided to go veggie, I didn’t feel good about depriving my kid of something he liked to eat. But I also felt like my own mother did all those years ago: I didn’t want to find myself cooking two meals every night! So, here’s how I found the balance.

In our house, breakfast and dinner are always vegetarian. For lunch, however, my son is usually at school, so we’re not eating together. Most days, he eats his school’s lunch, which includes meat three or four days a week. I also buy meat for packed lunches, but I am especially mindful of buying quantities and types that won’t go bad, like frozen chicken nuggets instead of a half-pound of sliced ​​turkey that will go slimy in the fridge before he finishes it, and trying to buy more sustainable choices, like turkey meatballs over beef. (I also tend to avoid buying any raw meat, since I’m no longer inclined to cook it.)

When we go out to eat or pick-up takeaway, my son can order whatever he wants – steak, hamburger, chicken fingers – provided that half the meal won’t go to waste. Likewise, when we visit Grandma or friends, he’s welcome to gobble up all the bacon on offer. At restaurants where we will share dishes, like our favorite Indian or Thai spots, we usually stick to all-veggie dishes that the whole family can all share, but if he has a real hankering for chicken tikka masala, I’ll order it and save what he doesn’t eat for the next day’s lunch.

If and when my son asks why I don’t eat meat, I try to explain it in a way that helps him understand (it takes a lot of land and resources to raise cattle and I don’t want to be wasteful!) But I’m also careful not to make him feel guilty about wanting to eat meat. We have friends who are vegetarian for religious reasons, so we’ve talked about that too. I also emphasize that everyone can make their own choices about what they eat.

The most difficult thing has been how to graciously integrate my choices into our social life. My mother did not try to hide how annoying she found it to cook meals to cater to me (and she was even more annoyed when my sister and her husband also gave up meat), but over time, she’s gotten used to plant-based planning meals. When we dine at someone else’s house, I always offer to bring a dish, so the host doesn’t have to change their plans.

Funnily, letting my son eat meat has probably made him more mindful of what he eats than if we’d insisted he be a vegetarian too. Now, he thinks of meat as a treat, which is really what I’d like most for him as he gets older and makes more and more of his own choices about what to eat and when.

LAURA FENTON is the author of The Little Book of Living Small and a small space and sustainable living expert. She lives with her husband and their son in Jackson Heights, Queens, in New York City. You can find her on Instagram @ laura.alice.fenton.