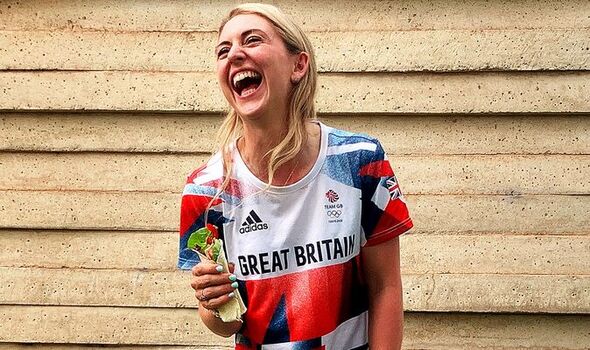 Dame Laura has opened up about her miscarriages (Image:)

But the 30-year-old, Britain’s most decorated female Olympic athlete, said she is now able to look back on that devastating time in her life and even laugh at her “bad luck”. Laura, who is married to fellow-Olympian Sir Jason Kenny, suffered a first miscarriage in November last year and then a second life-threatening ectopic pregnancy in January.

She had thought her symptoms were Covid, but was taken to hospital for emergency surgery and lost one of her fallopian tubes.

In April she shared her story on Instagram and was overwhelmed by the rush of love, as well as the number of people who revealed their own similar experiences.

“The more I’ve spoken about it the more I’ve realized it happens to be a lot of people,” she says. “I didn’t know my mum had had a miscarriage until I opened up about mine.

“You feel so lost and so alone and are having to Google symptoms – there is little support.

“I use my body on a day to day basis. When I get on that bike my body should work.

“But you’re asking it to do something I felt it should have been able to, and all of a sudden it didn’t.

“I rely on it all the time and the one time you don’t want it to let you down, it lets you down.

“I felt almost broken. It took me a long time to actually grieve. ”

Laura is now in a much better place and says she could not have done it without the support of her husband and four-year-old son Albie.

READ MORE: Laura Kenny reveals she had miscarriage and ectopic pregnancy in past few months

“I do now laugh. It was insane what happened – you couldn’t have made it up. You couldn’t have thrown that much bad luck at someone in a space of six weeks, it’s ridiculous.

“I can laugh now because I’m on the other side of it, but obviously at the time it was awful.”

Laura is now looking forward to the Commonwealth Games in Birmingham, which came after she took her fifth Olympic gold medal at the Tokyo Games last year.

But of course, post-pandemic competitions have some new challenges and one of her races, the team pursuit, may be at risk. “Two of my team mates have just got Covid. I was with them, so that’s really not very ideal. I have had Covid and the jabs, so

I’m hoping I stay well. That’s a bit of a blow.

“Since having Albie I have seen a difference. I have always been more sprint based than endurance based, but at some point in the last few years that has changed. It seems to be quite common after childbirth.

“But I still love it. I love riding my bike and I always said if I stop loving it I will stop. I’d call it early, I think.

“It’s been my life for such a long time I can’t imagine not doing it.

“I’d hate to think I would get to the point where I absolutely hate it.”

Laura describes her life as “absolute carnage”, adding “if you saw my day-to-day you would think,‘ How does she win anything? ’.”

Despite this, she manages to keep her life as a mother separate from her life as an athlete, balancing the two “quite nicely”. She says: “I’m a mum one minute and a bike rider the next. When I’m at home I’m just mum, he doesn’t know any different.

“He does ask more these days. If he is with us when someone recognizes us he says, ‘Why do people always say hello to you’. So he under-stands it a little, but he’s still young.

“It is a sacrifice, the fact I have to be away from Albie. He’s in reception class now, so I get ‘mum guilt’ a lot less if I’m training than I did a couple of years ago. But even now I can get into this funny headspace.

“Say the mums in school ask me to go out for a meal. I feel like I can’t because that would take time away from Albie.

“Because I was training all day I have to have this evening with him otherwise I feel like I’m letting him down. It’s like an internal battle.

“It’s not being selfish, it’s looking after yourself. And I do think people forget that. ”

Laura is backing Old El Paso’s Fajita FriYay campaign, and the company is giving away more than 10,000 free meal kits to those in need through the charity FareShare.

“There is a massive cost of living crisis at the minute and anything we can do to help anyone is a positive thing,” she says. 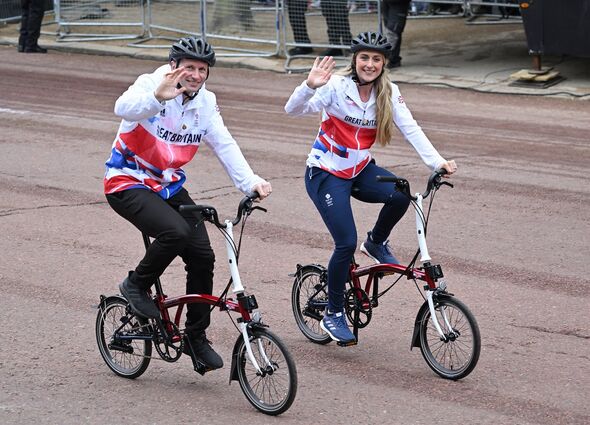 “I just find it mad that people looking after children are having to skip meals to feed their family.

“The price of food is getting ridiculous. The other day Albie wanted some strawberries and I was literally debating whether to pay it. A bag of crisps is cheaper and that’s terrible.

“As an athlete we look at what we eat on a daily basis – what we fuel our body with is so important.”

She says she hopes to instil that message in Albie: “Jason and I have a really good relationship with food and I would always like to think that Albie has too. I enjoy chocolate and it would be weird for me to be able to have it and him not, so we let him.

“But that means he doesn’t really ask unless he really fancies it. It isn’t some sort of special treat. It’s just another food. ”

With parents like the Kennys, Albie has won the genetic lottery when it comes to sports.

Jason is Team GB’s most successful Olympian in history and the couple have 12 Olympic golds among them. Despite this success, Laura isn’t pushing Albie to enter athletics – despite her already showing talent.

“He is in lots of sports clubs and for me that’s more about the social side of things, but I do want him to like sports. Whether he becomes an athlete I’m really not fussed.

“It’s an intense environment and you have to really love it to do it at the level we do.

“Every single day, every single pedal rev that I do is recorded, and you live in this world where you are under constant scrutiny from the people above, who literally could turn around and say ‘You’re not good enough’ and that’s your career done.

“That side of things makes me nervous. I wouldn’t want him to go through it, because I’ve only seen the good. What if it’s really bad on the bad side?

“But he is annoyingly quite good on a bike,” Laura laughs. “I mean he should be shouldn’t he? He is so natural on a bike it is just unbelievable.

“But I’m not pushing that for now – he can wait a little bit longer before he tries anything on the velodrome.”

This year both Laura and Kenny were awarded honors, becoming a Dame and Sir at the same ceremony performed by Prince William in May.

Just a few weeks later they were the pride of place in the Jubilee Pageant, something that excited Laura particularly, as a “proper royal fan”.

“We saw the Royals in their box watching. They gave us a nice wave. ”

But has all this nobility changed their lives at all?

“No, not really. Life is just the same. I mean, it’s very nice when you get free upgrades. Jason just messaged me saying he got one going to America and he is chuffed to bits. So yeah I guess it does have advantages, ”she laughs