Hunter Biden blamed First Lady Jill Biden for forcing him to go back to rehab – calling her a ‘selfish silly entitled c***’, ‘a moron’, ‘stupid’, and ‘vain’ – after she offered him a house and send him loving messages.

The biting insults were made behind his stepmother’s back in text messages on a newly uncovered backup of Hunter’s cell phone stored on his abandoned laptop.

The vicious verbal attack, appears to be over Hunter’s family asking him to go back to rehab in the winter of 2018.

In an exasperated text to his uncle, Jim Biden, on December 28, 2018, Hunter wrote that Jill and his then lover, his brother’s widow, Hallie, ‘created a drama’ that prompted Joe Biden to suggest he spend a month getting clean from drugs and alcohol. 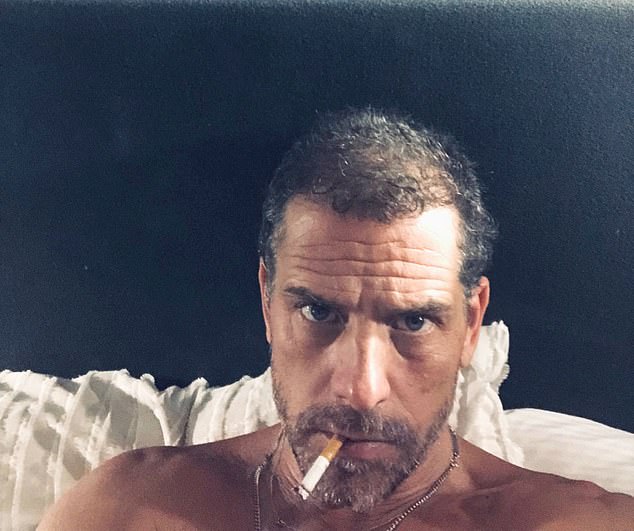 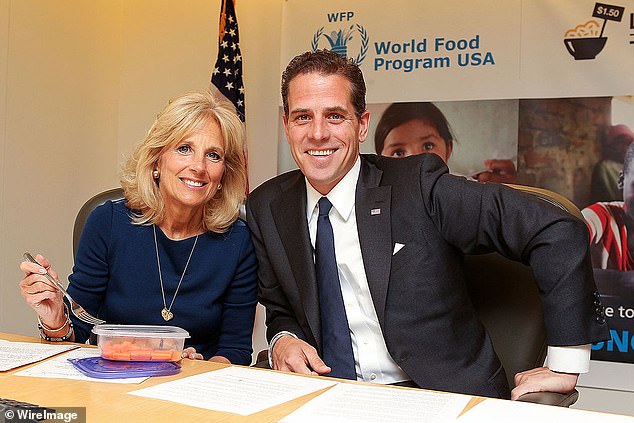 Hunter, 52, viciously tore into the first lady (pictured together in 2013) behind her back, branding her ‘stupid’, ‘vain’ and ‘a moron’ in text message exchanges with former lover and sister-in-law Hallie Biden and others 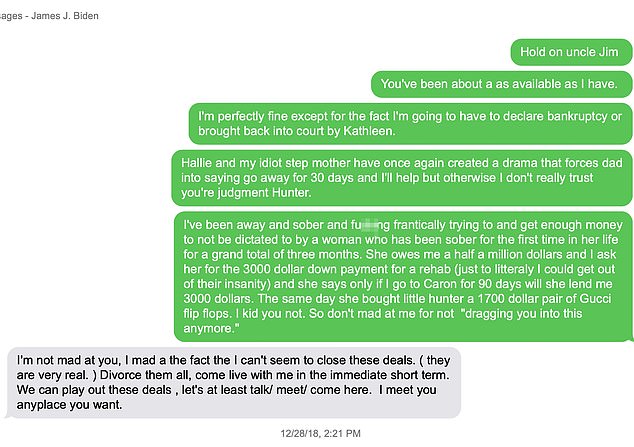 Hunter also aired his frustrations to his uncle, Jim Biden in an exchange on December 28, 2018, calling Jill ‘my idiot stepmother’, after his father Joe pushed him to go back to rehab

‘Hallie and my idiot stepmother have once again created a drama that forces dad into saying go away for 30 days and I’ll help but otherwise I don’t really trust you’re (sic) judgment Hunter,’ the president’s son wrote to Jim.

‘There is no drama but what she creates. What’s f***ing changed to create this panic. Nothing except me telling her she’s ac**t NS telling my mother she’s a moron. Both true things.’

A day earlier, Hunter had been raging at Hallie, hurling verbal abuse at her and Jill.

‘F*** my step mother for always being as much of a selfish silly entitled c**t as you,’ he texted his brother Beau’s widow.

Eventually Hallie snapped, texting Hunter back: ‘Enough of blaming and getting angry at me and your family for YOUR lack of sobriety. YOU ARE TO BLAME, NOT ME or YOUR MOTHER or ANYONE.’

Around the same time he also texted Hallie’s sister Liz Secundy more insults about his family, calling his sister, Jill and Hallie ‘stupid and vain’.

Despite the torrent of slurs behind Jill’s back, his direct texts to his stepmom were mild and pleasant.

On December 8, Jill wrote: ‘Sitting by the ocean thinking of you [sea life emojis]’. Hunter replied the following day: ‘Love you’. 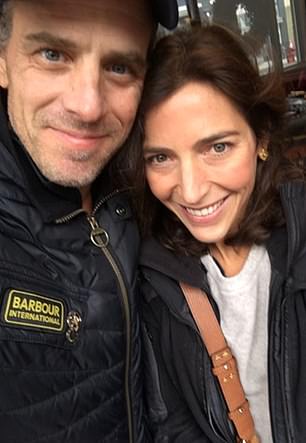 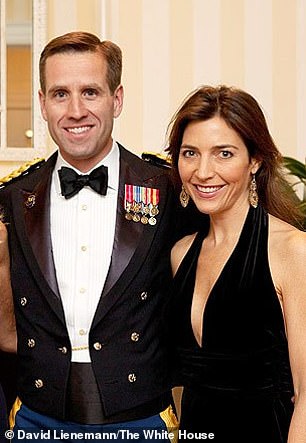 Hunter infamously engaged in an affair with his late brother Beau’s widow, Hallie (pictured) after his death in 2015 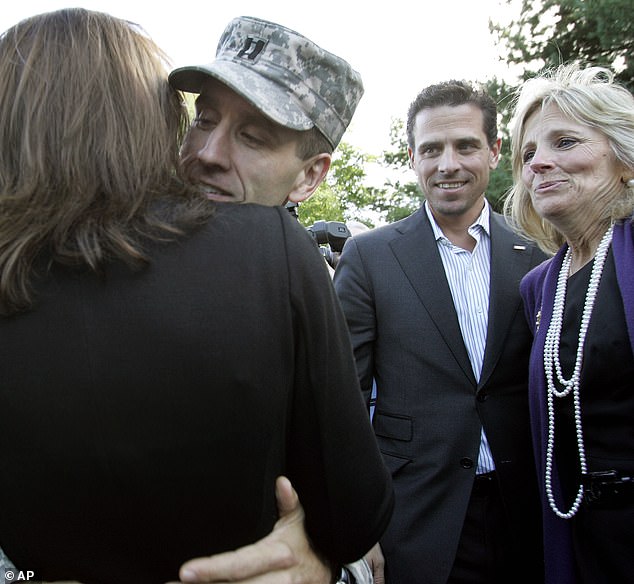 First Lady Jill Biden and stepson Hunter look on as her late stepson, Army National Guard Capt. Beau Biden hugs his wife Hallie as he arrives from a tour in Iraq in 2009 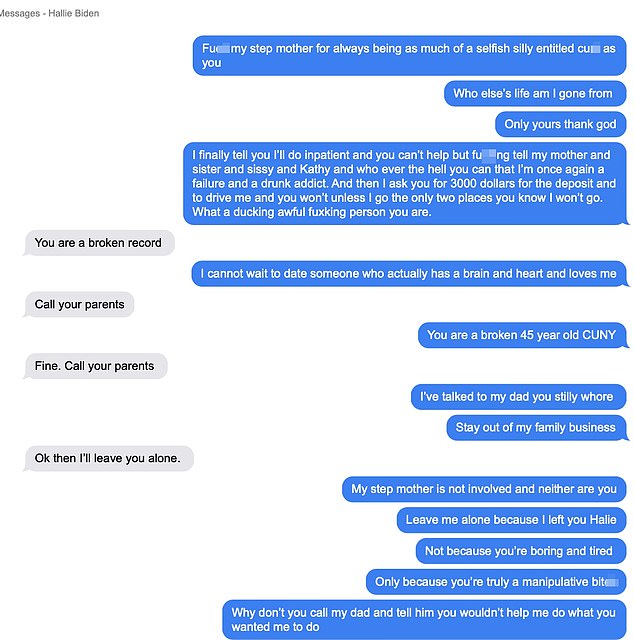 The day before he ranted to his uncle, Hunter had been raging at Hallie, hurling verbal abuse at her and Jill, whom he referred to as ‘a selfish silly entitled c**t’

He also sent a text to Hallie’s sister, Elizabeth Secundy, with more insults about his family, calling his sister, Jill and Hallie ‘stupid and vain’

In another exchange on December 28, Jill wrote: ‘Love you Hunter. Mom’, and on the 31st: ‘Happy New Year, Hunter. Hope next year is better… for all of us. I love you. Mom’.

Although he was cordial and even loving in texts directly to his stepmother, Hunter told his uncle about a flaming row the two had around Christmas of 2018.

Hunter texted his uncle Jim on December 29 2018, ranting about how Jill, Hallie and his sister Ashley tried to persuade Joe that Hunter was a ‘threat to himself and others’.

Hunter told Jim that he suggested staying in Pennsylvania and teaching, but claimed Jill responded by rolling her eyes and telling him: ‘Well you’re not going to be doing anything at all for yourself or your family if you just refuse to get sober. ‘

Hunter said he then called his stepmother a ‘moron’, saying she ‘wouldn’t survive one class in a[n] ivy graduate program’.

I said Yang ow [you know] what mom you’re af**king moron. A vindictive moron,’ he texted, recounting the conversation to his uncle.

‘I suooorted [supported] my GM family including some of the costs you should have used your salary to lay (pay) for – for the last 24 years.

‘And you do know the drunkest I’ve ever been is still smarter than you could ever even comprehend and you’re a shut (sic) grammar teacher that wouldn’t survive one class in an ivy graduate program.

‘So go f**k yourself Jill let’s all agree I don’t like you anymore than you like me.’

Two months before Hunter’s tirade against her, Jill had called him to offer one of her and Joe’s houses to him – formerly owned by Hunter’s late mother Neilia, Joe’s first wife, whose family nickname is ‘mom-mom’.

‘I was talking to Dad and I wondered if you wanted to use mom-mom’s house for you,’ Jill said in a voicemail to Hunter on October 21, 2018.

‘Because we have extra furniture and I’m sure you have furniture… It’s up to you. But let me know so I can pull it off the rental market. OK? Love you.’

Four days later Hunter texted her: ‘Thank you for the offer of the gate house. I’m trying to figure all of that out.’

Text messages show that Jill, on the other hand, had consistently sent messages of love and support to her stepson, who at times would either not reply or reply several hours later. 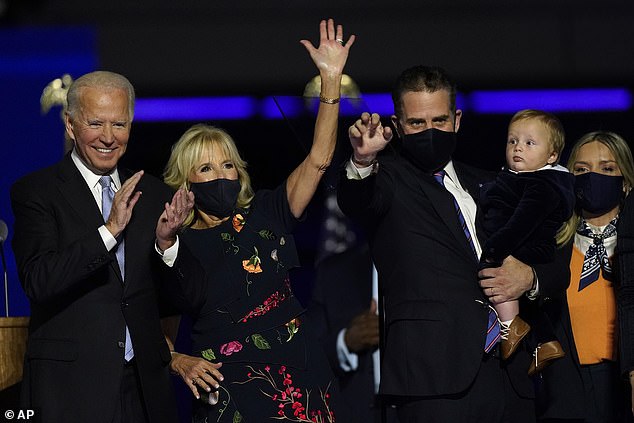 Prior to the shocking texts surfacing, there never seemed to be any signs of tension between Hunter and his stepmom. He is pictured with Jill, Joe and his wife Melissa and baby son Beau on election night 2020 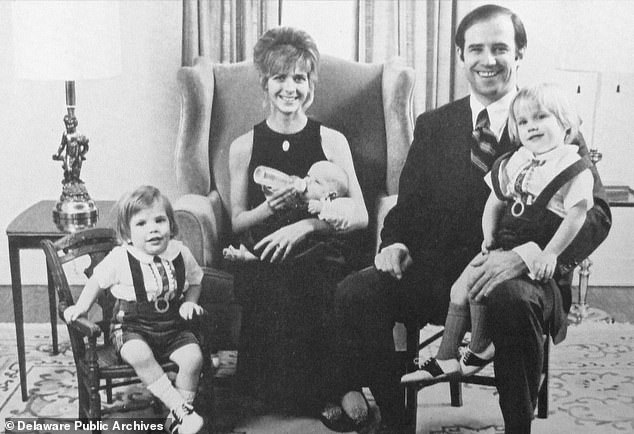 Hunter and his late older brother Beau, who died of brain cancer in 2015, were raised by their stepmother and their father Joe after their mother Neilia Hunter and their baby sister died in a car accident in 1972.

Joe met schoolteacher Jill, maiden name Jacobs, in 1975 and the two married in New York two years later. Their only child together, daughter Ashley Biden, was born in 1981.

Just like Hunter’s older brother, Ashley, 41, has a history of substance abuse and scandals. She has also had multiple run-ins with the law as a young adult. 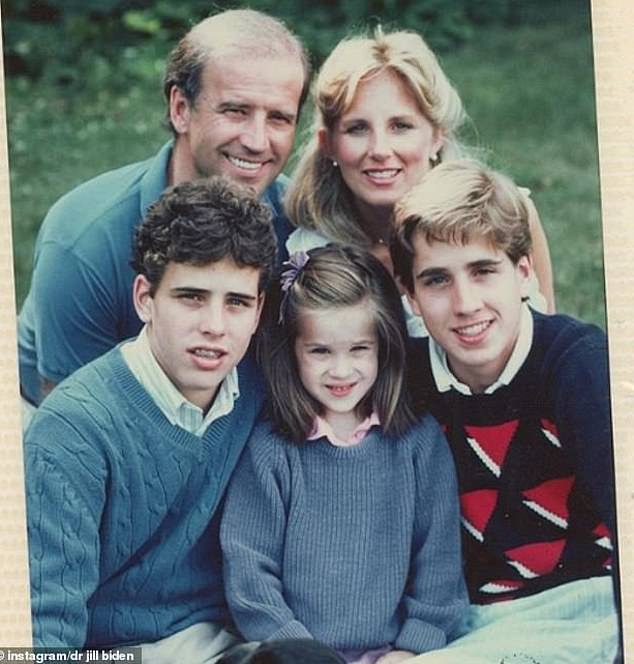 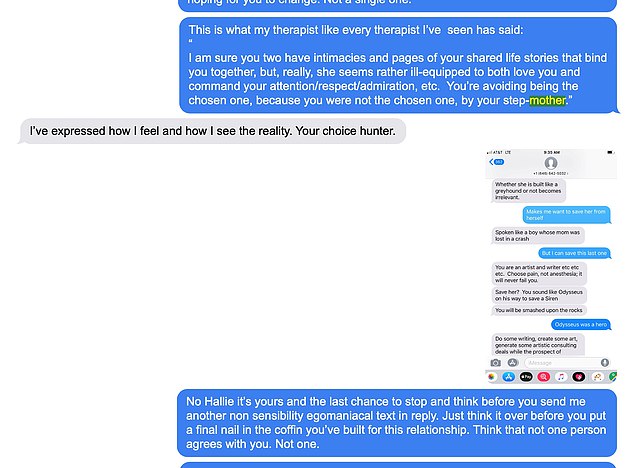 In a grandiose message, Hunter also told Hallie that his therapist had told him he was ‘avoiding being the chosen one’ because he was ‘not the chosen one, by your step-mother’

She has a bachelor’s degree and two master’s degrees, and earned a doctorate of education from the University of Delaware in 2007.

Prior to moving to Washington DC, she taught at a Delaware community college, at a public high school and at a psychiatric hospital for adolescents.

Writing in her memoir, she wrote: ‘Being a teacher is not what I do but who I am.’

In April 2019, she took a break from teaching for the first time since 1981 in order to help her husband on the campaign trail.