The dramatic move will impose a maximum limit on the number of passengers allowed to leave the airport between July 12 and September 11.

Airlines had planned to operate flights with a daily capacity averaging 104,000 seats over that period – meaning further cancellations are likely.

Heathrow said it has ordered airlines to ‘stop selling summer tickets to limit the impact on passengers’.

The measure will lead to more cancellations on top of the thousands of flights axed in recent months.

Affected passengers will not be entitled to compensation as the reason for the cancellations will be classified as being outside the control of airlines.

Passengers have been hit by delays and cancellations at airports across the UK due to a shortage of staff after thousands were laid off or left the industry during Covid. Yesterday Heathrow canceled another 61 flights at the last minute – disrupting 10,000 passengers.

And in a fresh sign of chaos, easyJet passengers ‘mutinied’ after being forced to wait for four hours on the Gatwick Airport runway yesterday. The plane never even departed and they had to wait ‘until midnight’ to collect their luggage after being returned to the terminal. 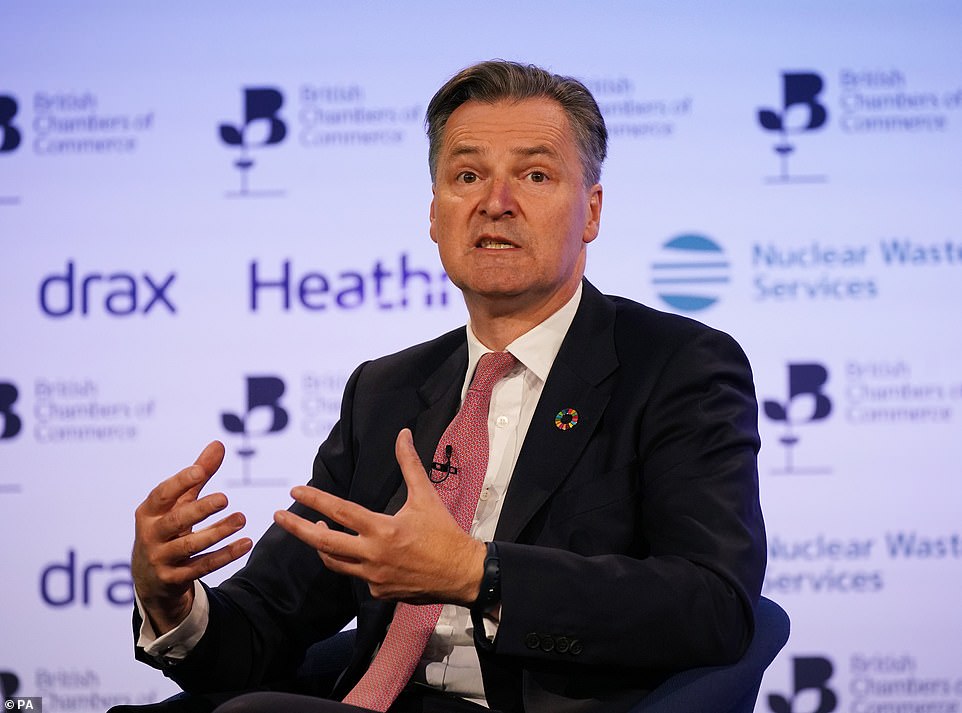 Heathrow’s chief executive John Holland-Kaye today announced departing passengers would be capped at 100,000 per day for the rest of the summer 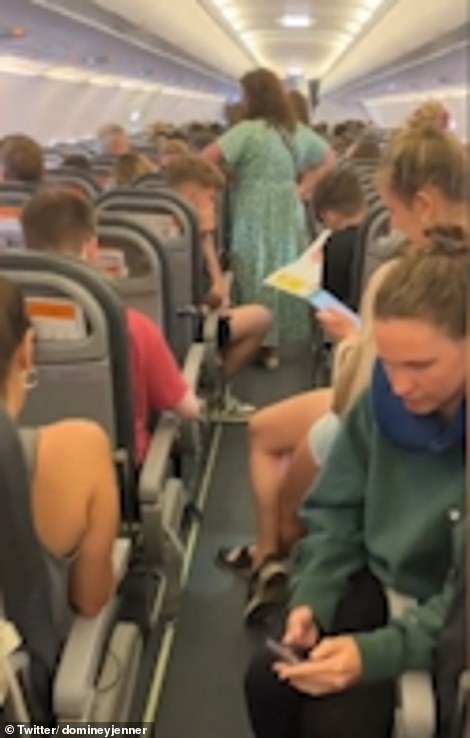 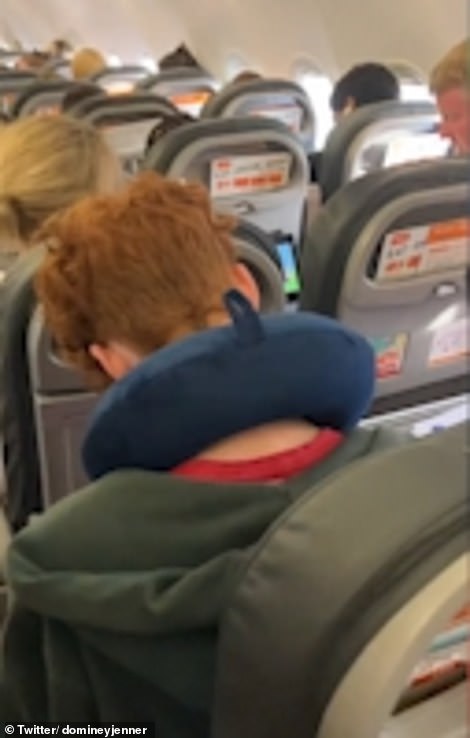 In the latest evidence of the chaos gripping UK airports, easyJet passengers were left stuck on a runway for four hours yesterday during searing conditions

Announcing the passenger cap, Heathrow chief executive John Holland-Kaye said today: ‘Over the past few weeks, as departing passenger numbers have regularly exceeded 100,000 a day, we have started to see periods when service drops to a level that is not acceptable. ‘

Why is Heathrow imposing a daily passenger cap?

Airlines were able to take advantage of a government scheme which meant they could cancel summer flights without losing their future rights to the valuable take-off and landing slots.

But even with this measure, Heathrow believes airlines still planned to operate flights carrying 4,000 more passengers daily than could be processed in an acceptable manner.

Heathrow said: ‘On average only about 1,500 of these 4,000 daily seats have currently been sold to passengers, and so we are asking our airline partners to stop selling summer tickets to limit the impact on passengers.

We recognize that this will mean some summer journeys will either be moved to another day, another airport or be canceled and we apologize to those whose travel plans are affected.

‘But this is the right thing to do to provide a better, more reliable journey and to keep everyone working at the airport safe.’

Heathrow insisted the capacity cap is ‘in line with limits implemented at other airports’.

He added that airlines have ‘discretion as to how they implement this in their individual schedules’.

He said this is due to a combination of poor punctuality of arrivals due to delays at other airports and in European airspace, as well as increased passenger numbers ‘starting to exceed the combined capacity of airlines, airline ground handlers and the airport’.

He added: ‘Our colleagues are going above and beyond to get as many passengers away as possible, but we cannot put them at risk for their own safety and well-being.’

In the latest evidence of the chaos gripping UK airports, easyJet passengers were left stuck on a runway for four hours yesterday during searing conditions.

Passenger Dominey Jenner said the flight was due to depart Gatwick for Dubrovnik at 1.40pm yesterday but due to delays passengers only boarded at 4.30pm before starting a long wait.

During the time – when temperatures were 86F (30C) outside – she says customers were only offered ‘one glass of water’ and there was no food available.

They eventually left the plane at 8.30pm following a ‘mutiny’ on board, ‘with people giving a deadline as to when they would simply leave’.

‘I heard that the police at Gatwick were about to come and escort us off as they’d had calls from people on board,’ she said.

Once off the plane, Ms Jenner said their luggage: ‘didn’t arrive until midnight,’ and she claimed passengers had to go through passport control despite not flying anywhere.

It came as an aviation boss suggested Brexit was partly to blame for travel chaos by keeping out foreign workers.

He added that a recruitment crisis had been sparked by Brexit and aviation workers should now be added to the shortage occupation list to alleviate pressure. 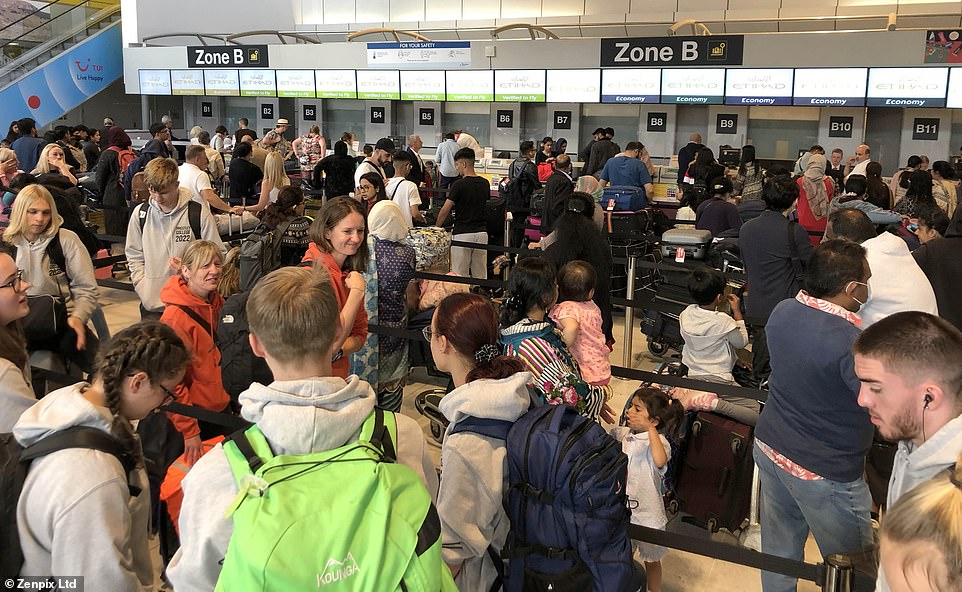 Mr Joeinig wrote in The Times: ‘Brexit had a big negative impact, reducing the available pool of employees.

‘This was compounded during the pandemic, with the British aviation sector suffering huge job losses once furlough schemes ended before the easing of travel restrictions, and with many of these people lost to the industry.’

He also claimed that ministers have failed to slash red tape sufficiently to speed up background checks on new recruits.

At present, employers must ask for references from each new recruit’s employer for the previous five years.

This can take several weeks if some previous employers drag out responding.

But Transport Secretary Grant Shapps changed the law last month to streamline the process. It allows employers to request details of each previous employer from HMRC.

Meanwhile, airport disruption could be compounded by Sunday’s estimated 100F (38C) heatwave, with the Met Office warning planes could struggle to take off.

This is because planes can become too heavy to take off in very hot weather due to reduced air density resulting in a lack of lift.

This happened during a heatwave in summer 2018 at London City Airport when some passengers had to be removed so the services became light enough to take off on the relatively short runway. 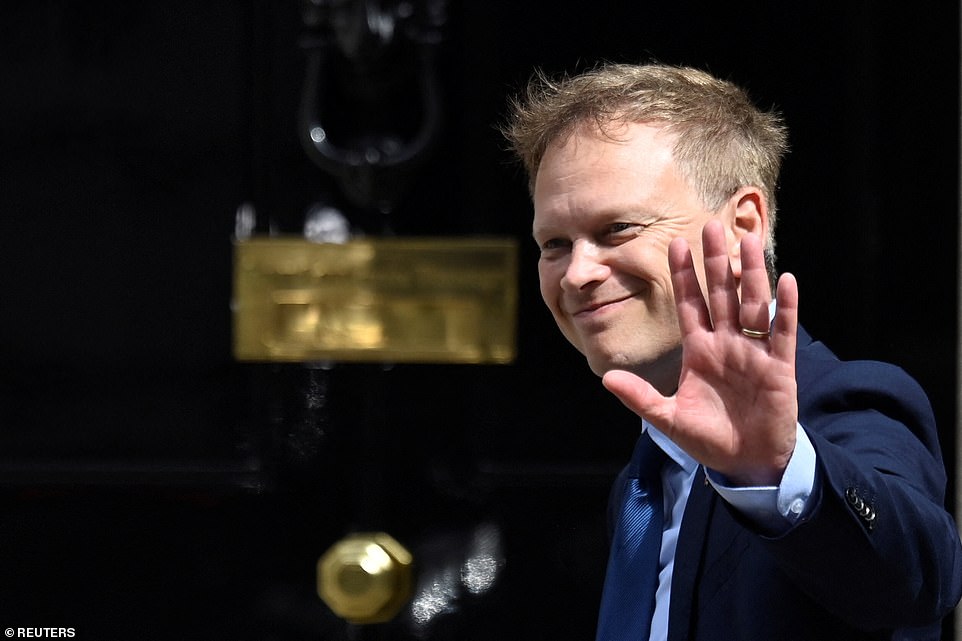 At present, aviation employers must ask for references from each new recruit’s employer for the previous five years. But Transport Secretary Grant Shapps changed the law last month to streamline the process. It allows employers to request details of each previous employer from HMRC