Hailey Bieber went on an impromptu fashion parade around New York City on Wednesday, as she showed off a number of killer looks to promote her new beauty line Rhode.

The 25-year-old model was first seen out in a clingy white dress that showcased her incredible physique as she headed to Good Morning America where she discussed her husband Justin Bieber’s face paralysis.

She was then spotted in a chic beige suit as she hot-footed it across town for an appearance on Live With Kelly And Ryan, during her busy day of promotional duties.

But the daughter of Stephen Baldwin didn’t stop there, as she was then pictured heading to Jimmy Fallon wearing a short black dress and shades, showing off her toned legs as strutted to yet another appointment.

While appearing on GMA, Hailey admitted that recent medical scares just months apart have brought her and husband closer together, days after she revealed the he is recovering from Ramsay Hunt syndrome.

Hailey, who suffered her own health struggle in March this year when she suffered a mini stroke, said that the 28-year-old Canadian pop star is ‘doing really well’ after suffering facial paralysis as a result of the condition. 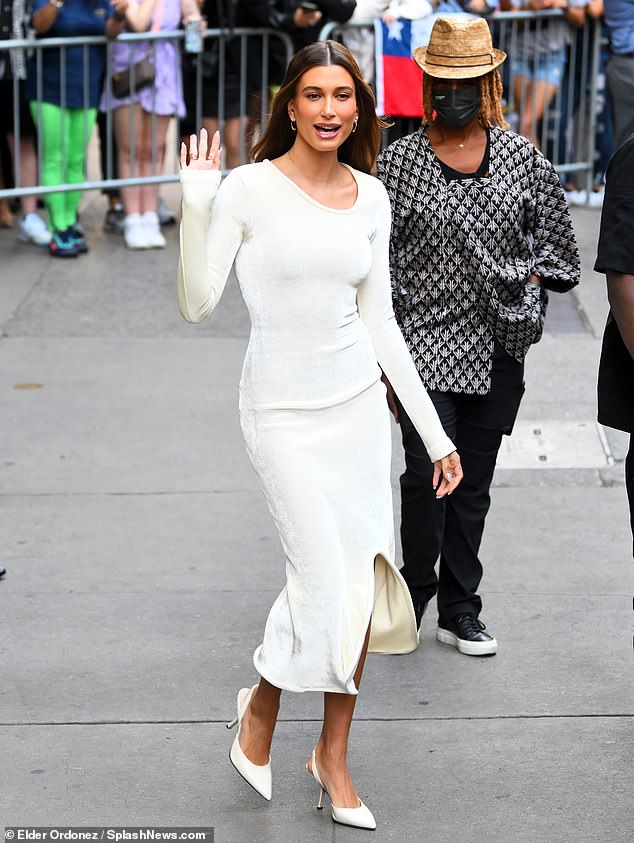 A knockout! Hailey stunned in clingy white dress as she’s pictured leaving Good Morning America on NYC and was on her way to film Kelly and Ryan on Wednesday 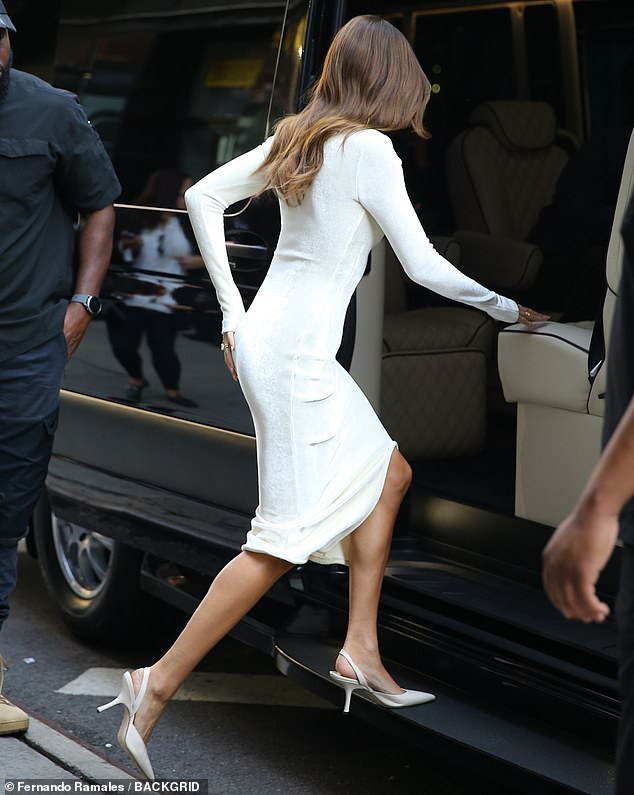 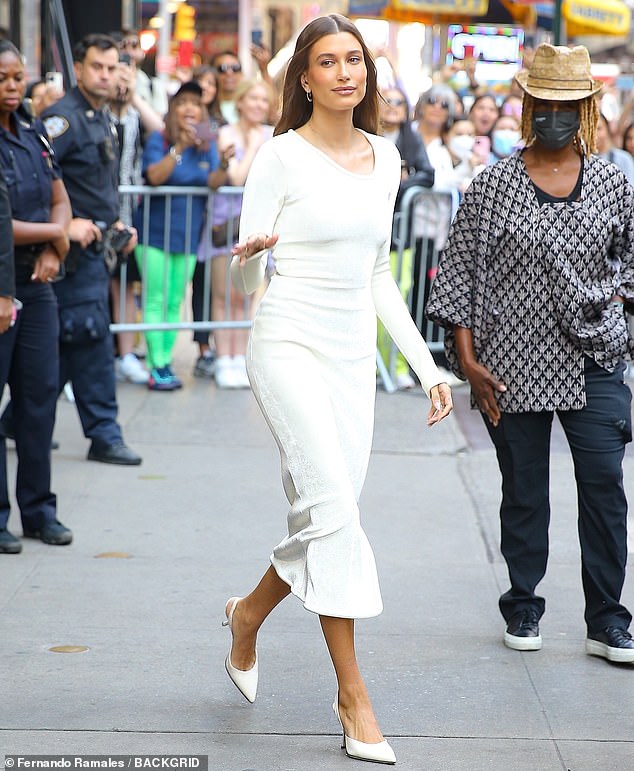 Effortless style: Hailey is currently on the promotional trail for her new beauty line while her husband deals with his recent health battles

She appeared on the show to promote her new line of skincare line, called Rhode after her middle name, and looked stunning in a clingy white ensemble for the interview.

However, while promoting her new products, Hailey also offered an update on how Justin is doing – days after he revealed that his face had been partially paralyzed from the condition, which forced him to cancel several tour dates.

‘He’s doing really well, he’s getting better every single day,’ the model said. ‘He’s feeling a lot better. And obviously it was just a very scary and random situation to happen, but he’s going to be totally okay. And I’m just grateful that he’s fine. ‘

Second look: Later, Hailey was seen changing outfits as she arrived for Live with Kelly and Ryan 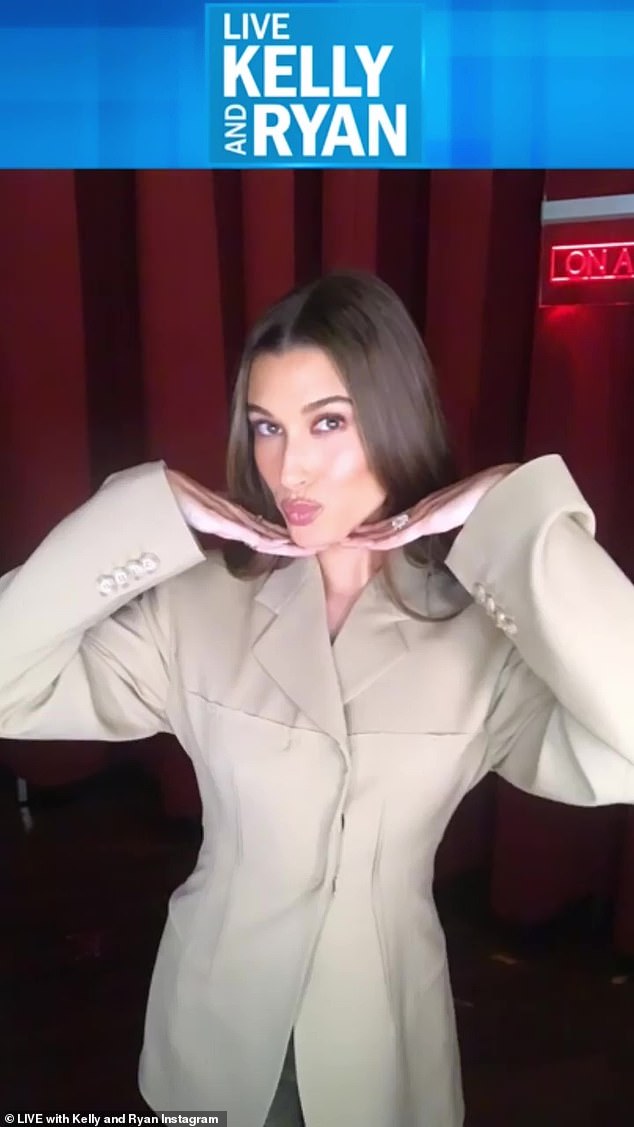 Cute! After her appearance on the show, Hailey struck a number of fun poses 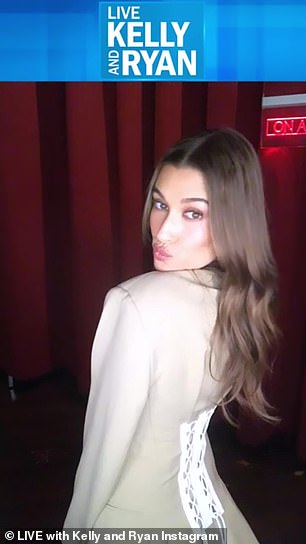 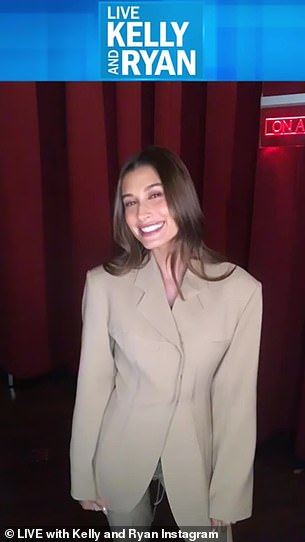 Looks for days: Hailey showed off another winning look as she posed after filming Live With Kelly and Ryan

Talking about how she is doing after undergoing surgery to close a hole in her heart, she said: ‘I feel a lot better after that situation, I feel good. You know I had a procedure done to close this hole in my heart. ‘

‘And I’m just giving my body the time to heal and recover. It was a little hard for me to recover from the procedure, just giving myself the time to be able to work out again and feel like normal if that makes sense, but I am doing well now. I’m not having to be on any medication anymore so I feel good. ‘

When asked about how they both handled their health scares so close to one another, Hailey explained: ‘I think going through it very publicly, in front of a lot of people, it kind of forces you in a way to just be upfront about what is going on. ‘ 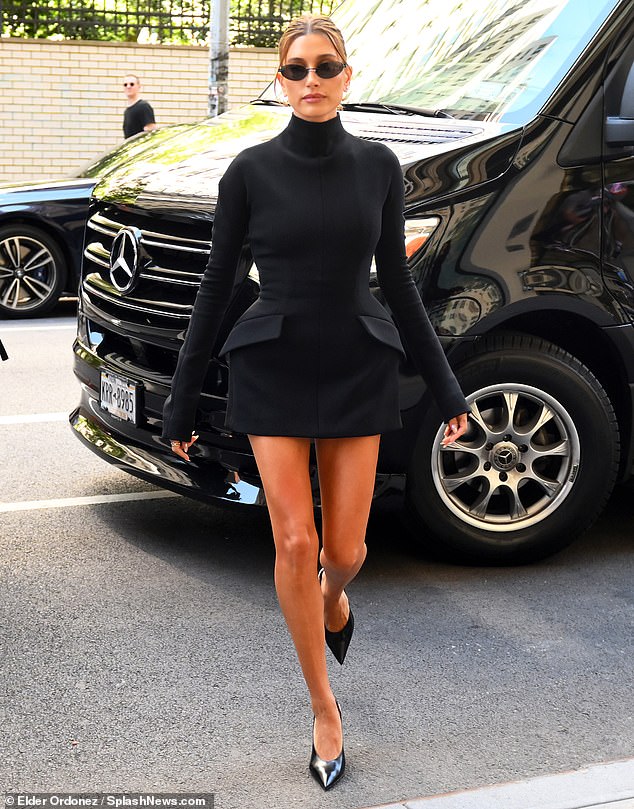 Style queen: Hailey showed off her love for fashion in her third look of the day 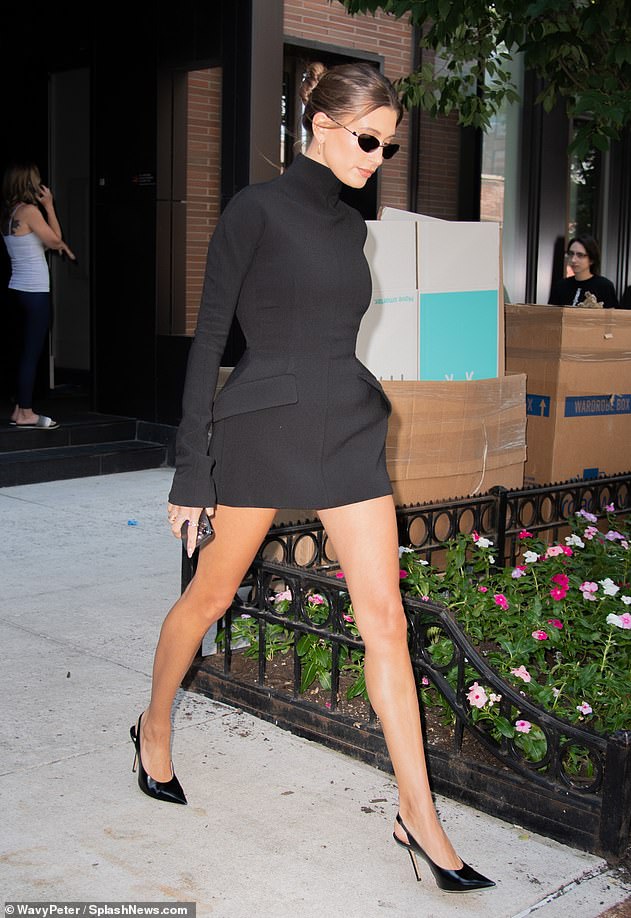 Sashay away: Hailey then changed into her third outfit on the day on her way to Jimmy Fallon

Publicity blitz: Hailey changed into a number of different outfits as she strolled around NYC

‘So that people understand what you’re going through. And I think it opened up a lot of really amazing and important conversations.

Justin, who has been keeping a relatively low profile while he recovers, did give a shout-out to her new skincare company Rhode on his Instagram on Wednesday to coincide with her publicity blitz. 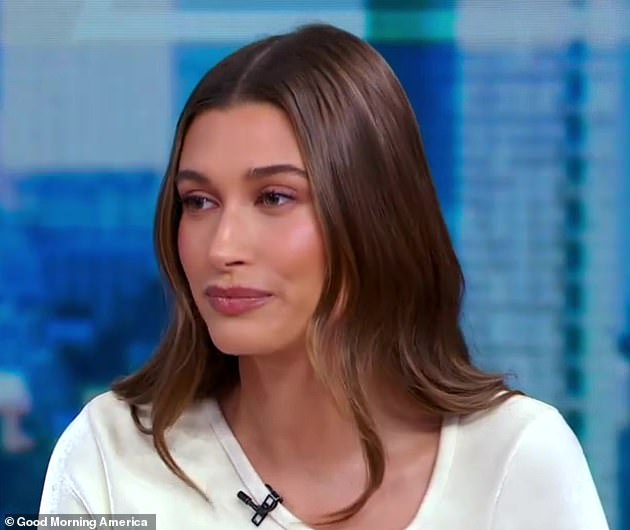 Speaking out: Hailey Bieber breaks her silence over Justin Bieber’s health battle as she reveals it’s ‘brought them closer’ after she suffered a mini stroke in March 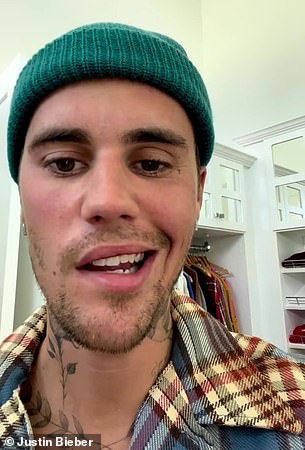 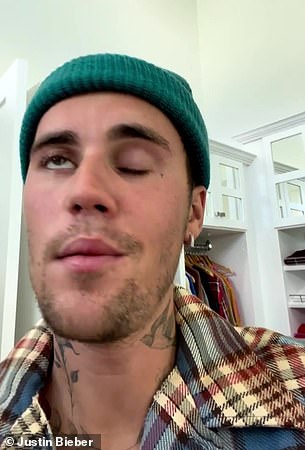 Pain: Justin revealed last week that he’s currently recovering from Ramsay Hunt syndrome that has resulted in one side of his face being temporarily paralyzed

Ramsay Hunt syndrome is triggered when the virus that causes chickenpox in children becomes reactivated and leads to inflammation and irritation on the facial nerves.

It is not clear what causes this, but the virus is thought to become re-activated due to a weakened immune system. This can also be triggered by stress.

Most patients get back all their movement within a few weeks to months. But in some cases it may lead to a permanent reduction in movement. Treatment involves anti-virals and steroids.

Some doctors may also recommend facial exercises, although there is little evidence whether this works. About five in 100,000 Americans develop this syndrome annually.

‘I am so proud of you baby,’ Justin wrote to his 241million followers. ‘No one knows the long hours of care and passion that you have put into building a skincare brand that is truly to serve the people.

The most beautiful thing about you is your care to protect people with good ingredients that will help their skin to flourish like you did for me and my skin. ‘

Last Friday, Justin shared a three-minute video explaining the diagnosis, which is a complication of shingles that can lead to facial paralysis.

Meanwhile, in a new interview with Byrdie, Hailey opened up about how she is doing after recently undergoing surgery to close a hole in her heart following her mini stroke.

‘My body is taking a little longer to heal than they thought it would,’ she told the publication.

‘After they did the heart procedure, I’m always the person who’s in a rush to get back to things, but this has taught me that it’s not physically possible sometimes.’

‘I was a dancer when I was a teenager, so my body has always just been in strong form,’ she added.

‘I love fitness, so the last couple of months have been a little hard for me because it’s such an important part of my routine and day.’

Elsewhere in the interview, Hailey talked about her struggle with imposter syndrome and how she creates order in her chaotic lifestyle.

‘I feel grown-up in many ways and have been married for almost four years. I’m happier than I have ever been, but I still have moments where I feel very insecure and like I don’t belong anywhere, ‘she explained about being unable to avoid imposter syndrome.

‘I feel like people don’t take me seriously, and this whole industry is very interesting. It feels like I’m living in a simulation sometimes. ‘ 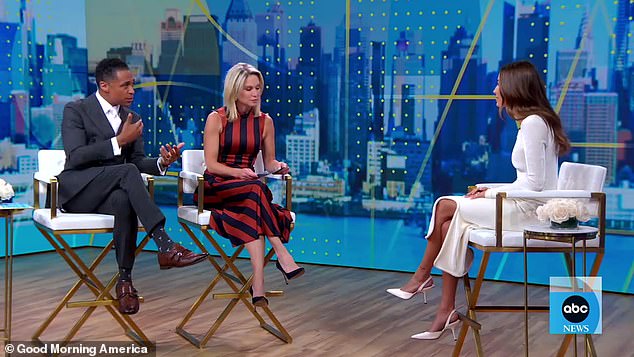 Opening up: Hailey, 25, suffered a mini stroke in March leaving her needing surgery 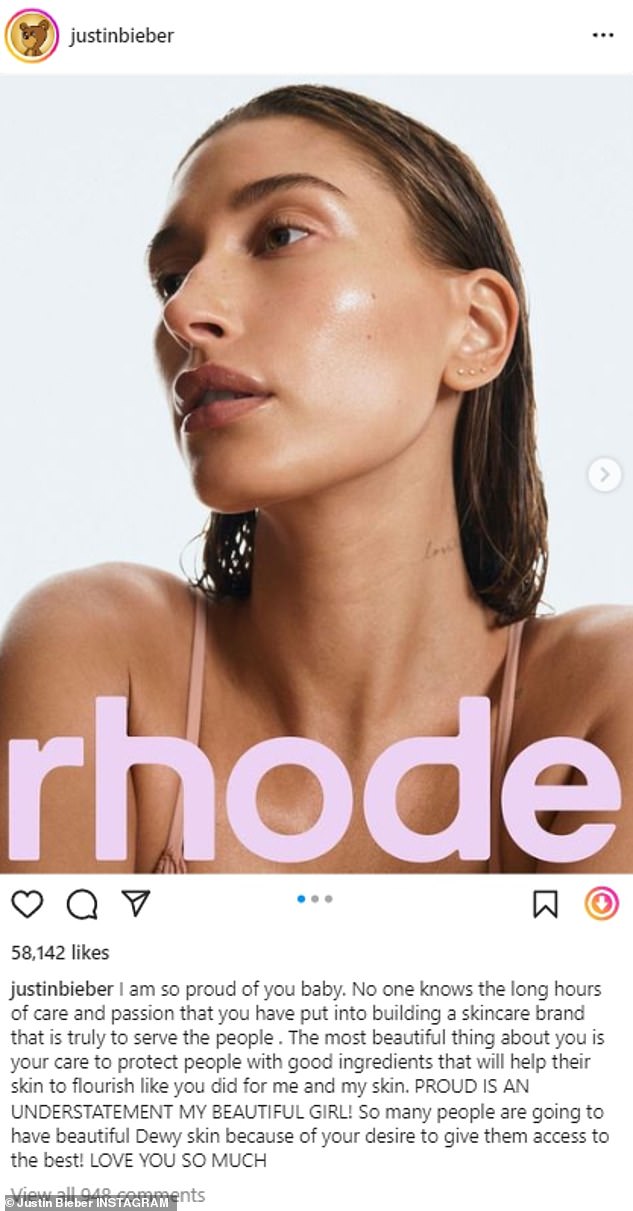 Shout out: Despite going through a tough health battle, Justin promoted wife Hailey’s new skincare line with an Instagram post on Wednesday