The 19-year-old Swedish climate campaigner will speak at 5.15pm from the Pyramid Stage in front of a back drop that shows how global temperatures have risen.

She is also expected to mention her book, The Climate Book, which is out on October 27. Thunberg’s appearance will be followed by a performance by California female rockers Haim.

It’s unclear how she traveledled to the festival from Sweden, where she has been organizing school strikes.

The festivities – which have returned for the first time since Covid – began on Thursday, with thousands setting up camp by Tuesday.

An estimated 200,000 revellers have flocked to Worthy Farm for the world’s most iconic music festival. 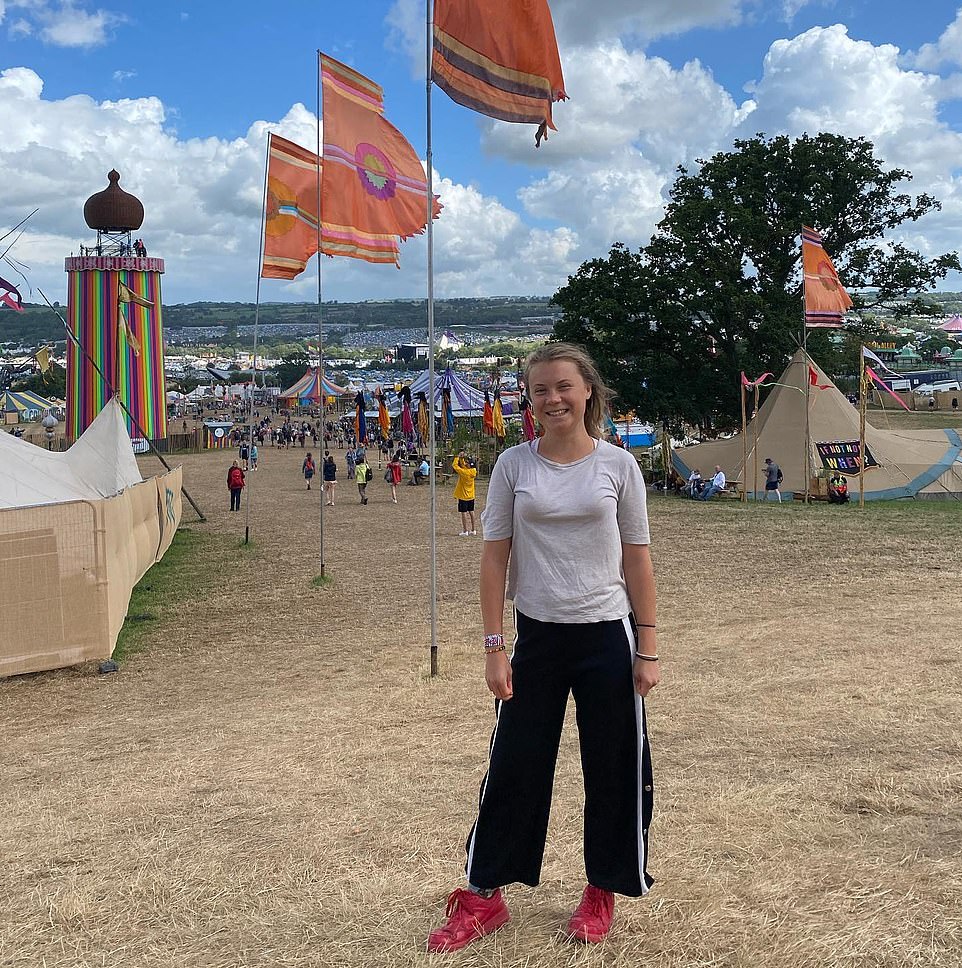 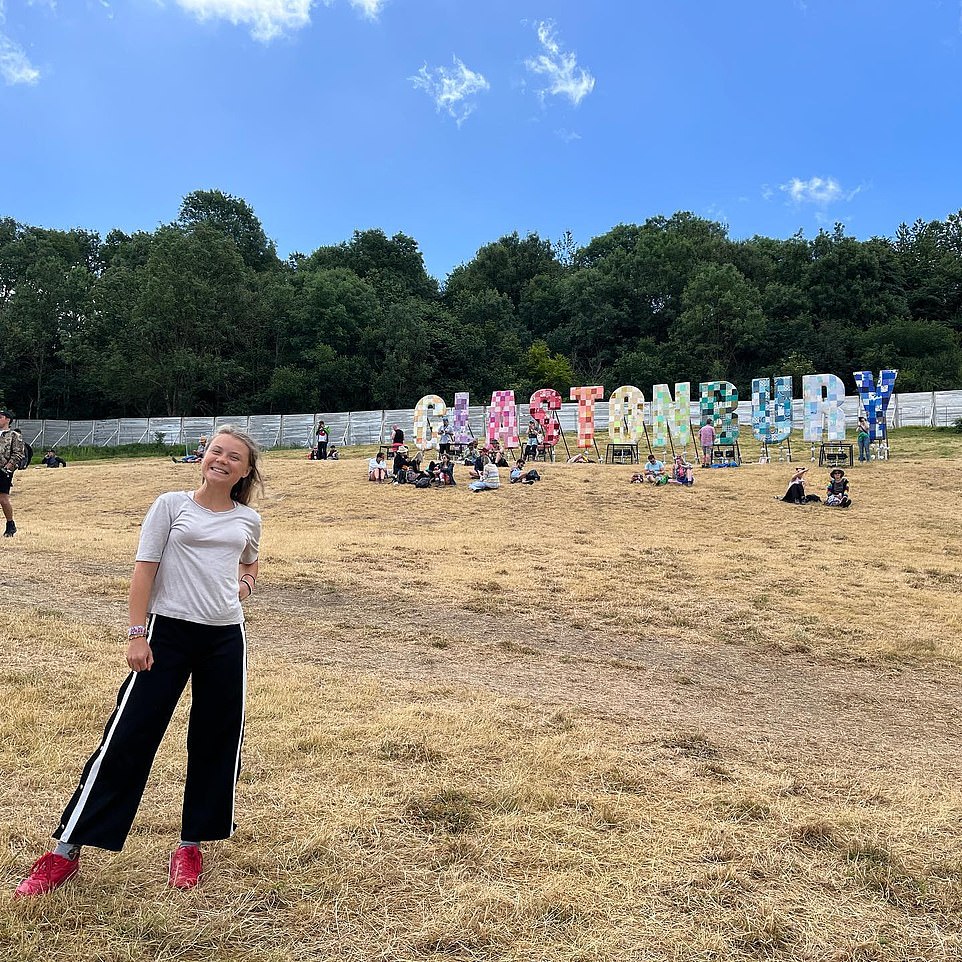 The climate campaigner, 19, will speak at 5.15pm from the biggest stage at Worthy Farm, where 200,000 fans are camped

In a Tweet, Greta said: ‘I’m excited to announce that today I will be on the Pyramid Stage at Glastonbury 5.15pm. See you there! ‘

A few minutes before the Glastonbury Festival Tweeted: ‘We’re very excited to announce that Greta Thunberg will be making a special appearance on the Pyramid Stage at around 5.15pm today. Don’t miss it! ‘.

The Pyramid Stage has a backdrop showing Professor Ed Hawkins’s warming stripes – a graph that represents the gradual rise in global temperatures over two centuries.

Back in 2019, there were murals of the environmental activist and school striker all over the festival with the slogan ‘What would Greta do?’ 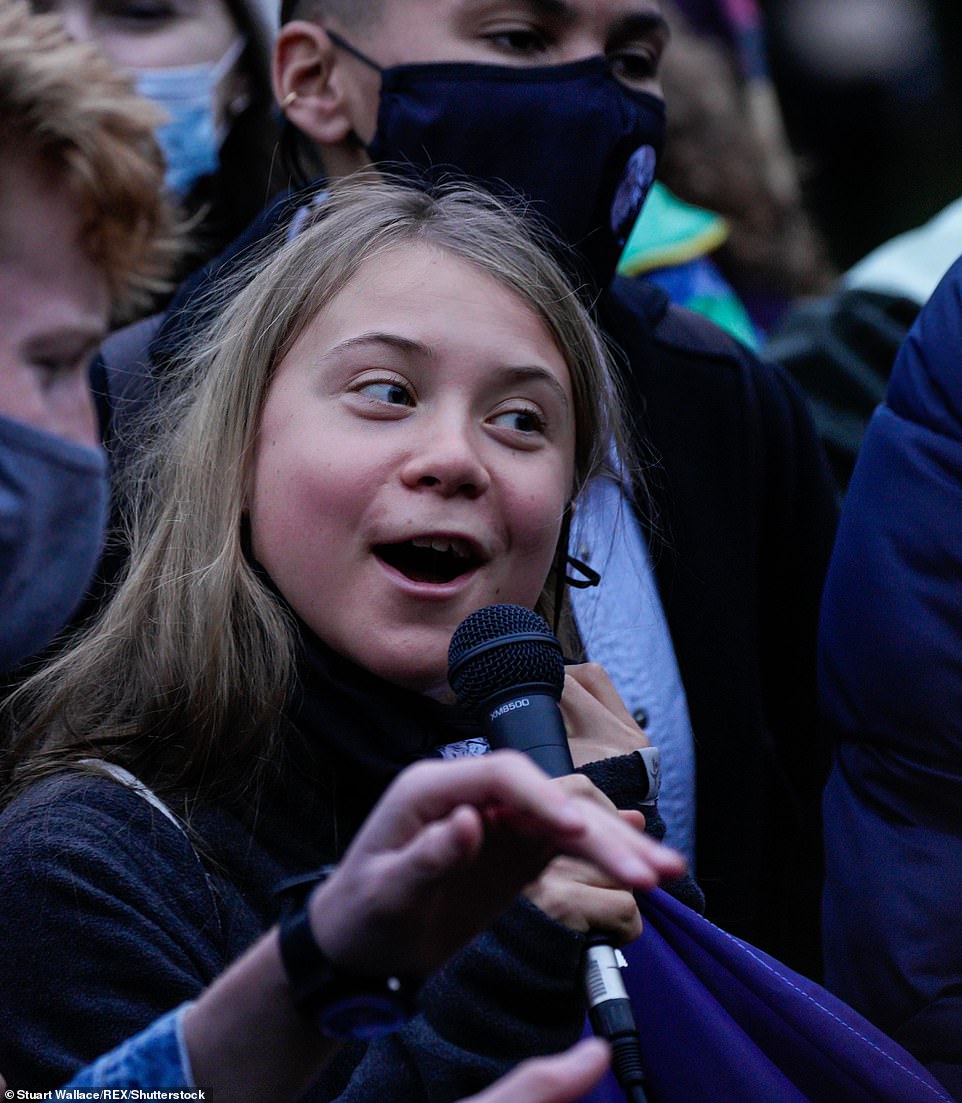 Swedish teenage environmental activist Greta Thunberg photographed, at 18, near the site of the United Nations COP26 in Glasgow last year 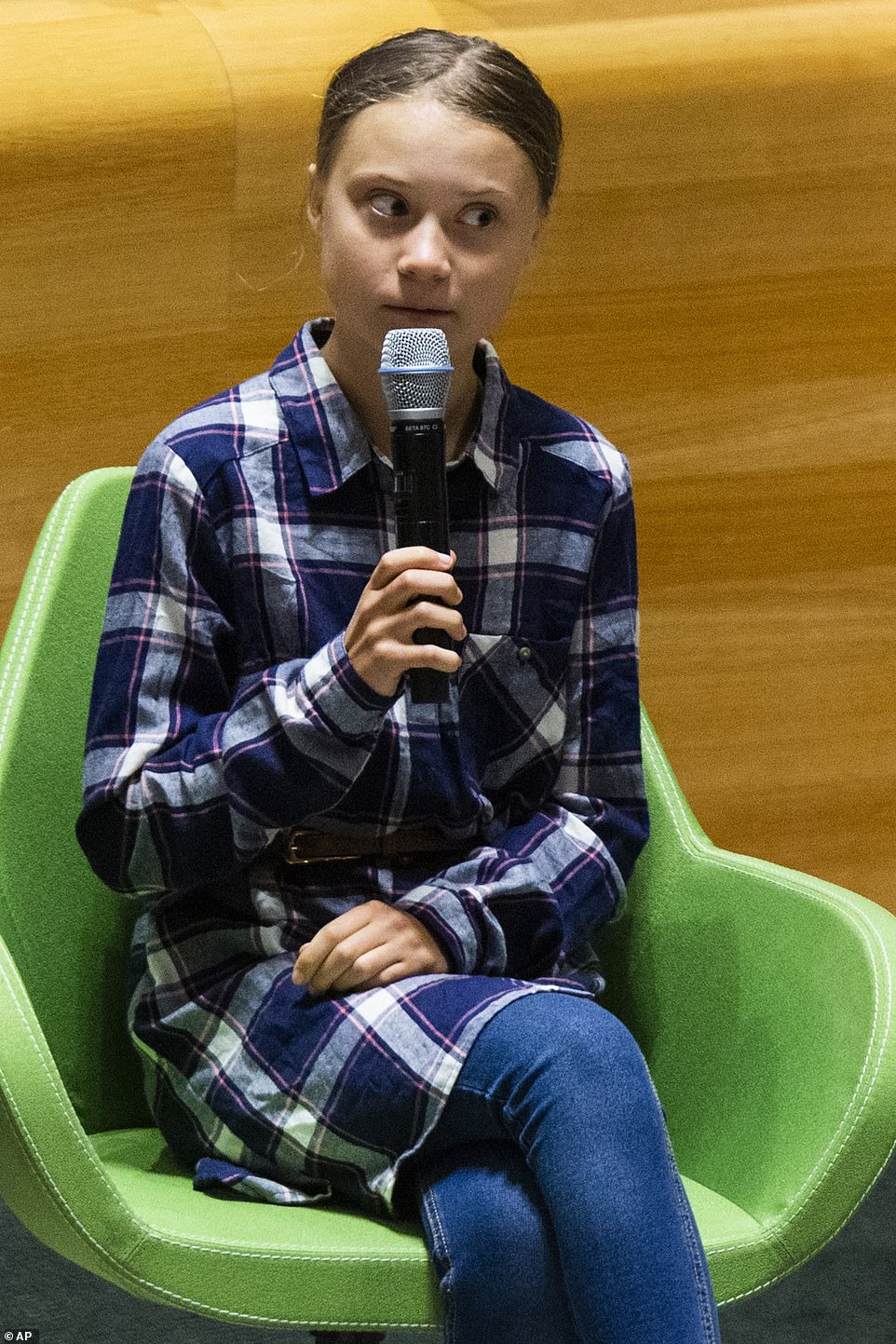 Greta Thunberg, pictured, at 16, when she addressed the Youth Climate Summit in 2019 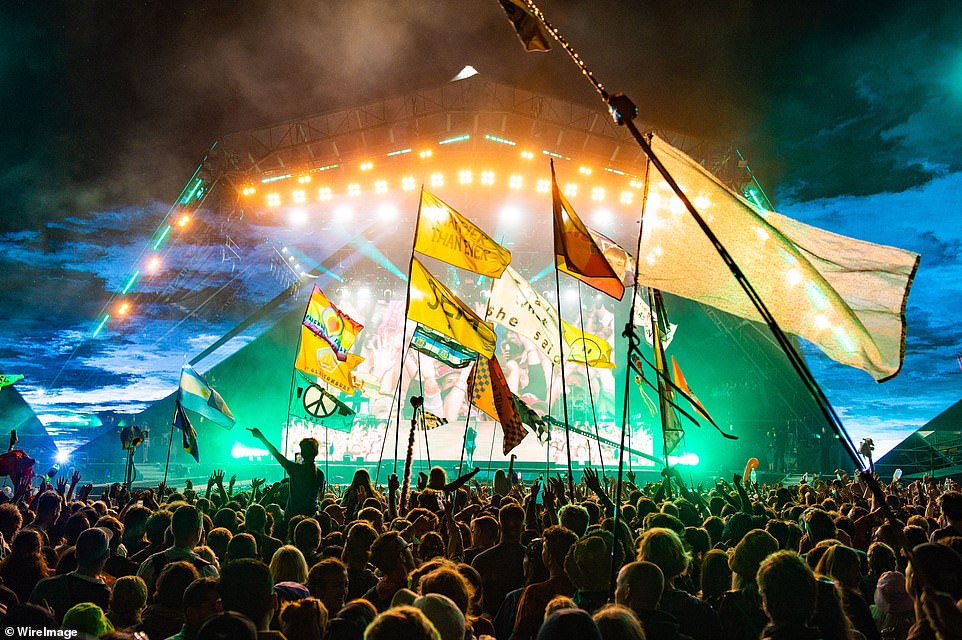 General view of the Pyramid Stage where Greta will take to during day three of the Glastonbury Festival at Worthy Farm, Pilton on June 24

Sheryl Crow dedicated ‘Soak Up The Sun’ to the then 16 year-old activist three years ago.

Speaking then, she said: ‘This is the biggest story in the world, and it must be spoken as far and wide as our voices can carry, and much further still.

‘That’s why I have decided to use my platform to create this book, which is based on the best science currently available – a book that covers the climate, ecological and sustainability crisis holistically.’

This year’s headliners at Glastonbury include Paul McCartney, Kendrick Lamar and Billie Eilish, who in her explosive Pyramid Stage set last night slammed the US Supreme Court’s abortion rights overhaul. 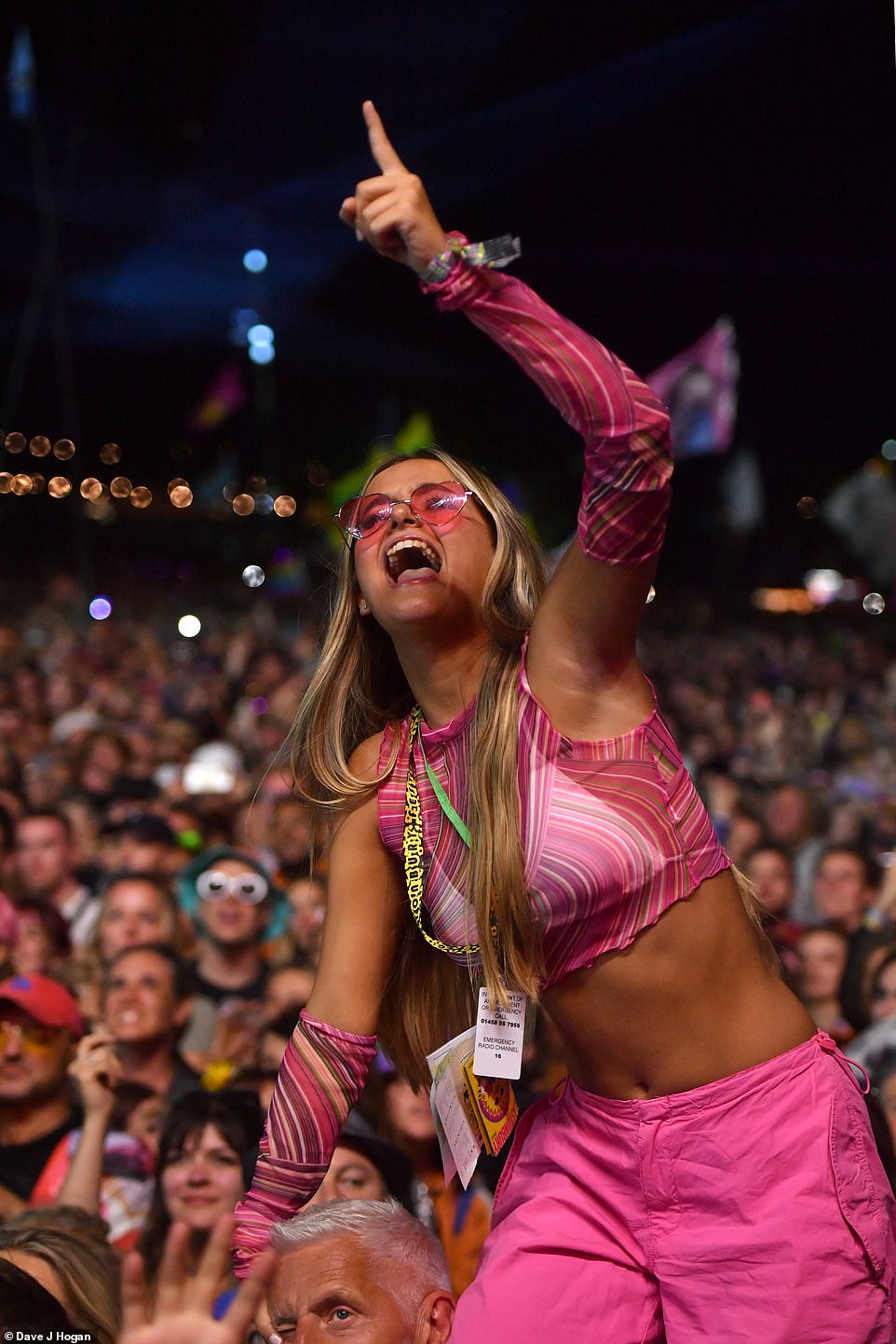 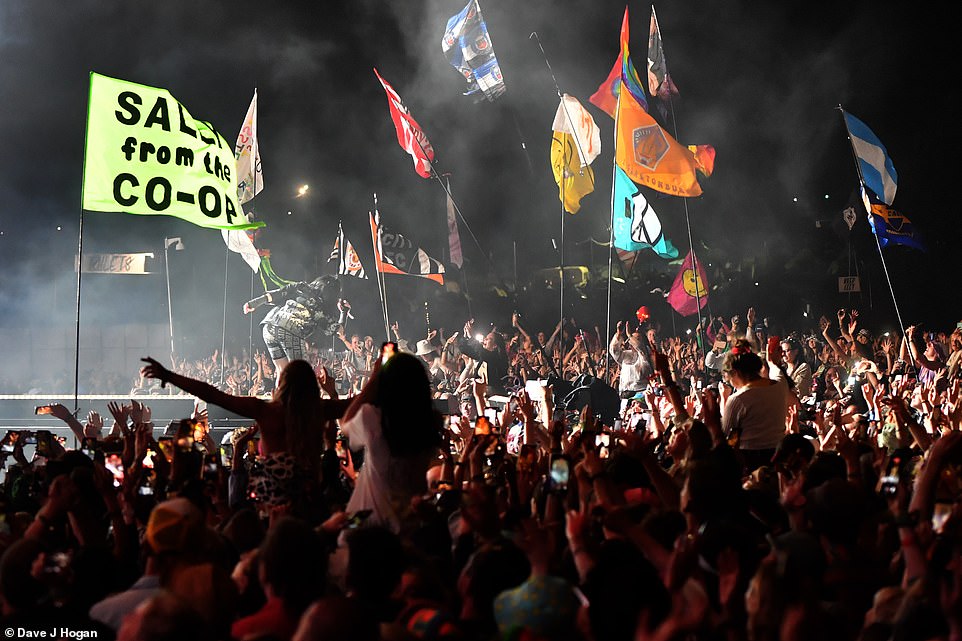 Glastonbury made a glorious return after three years as revellers resisted nationwide rail strikes and thunderstorm fears to bury memories of Covid. The stage is pictured last night 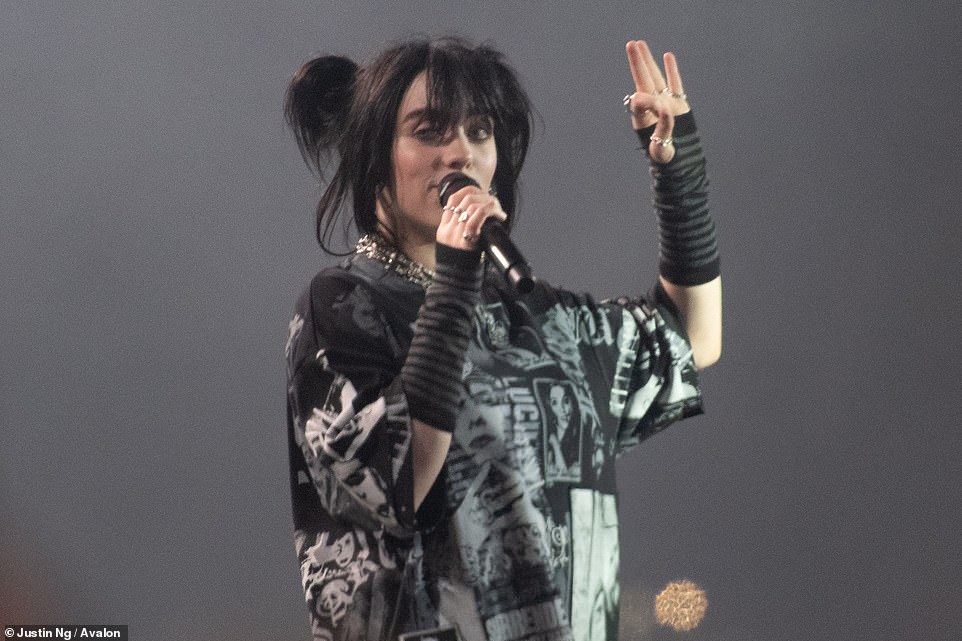 Emotional: Billie Eilish said it’s been a ‘dark day for women’ following the US Supreme Court’s decision to overturn Roe V Wade, as she took to the stage at the Glastonbury Festival on Friday 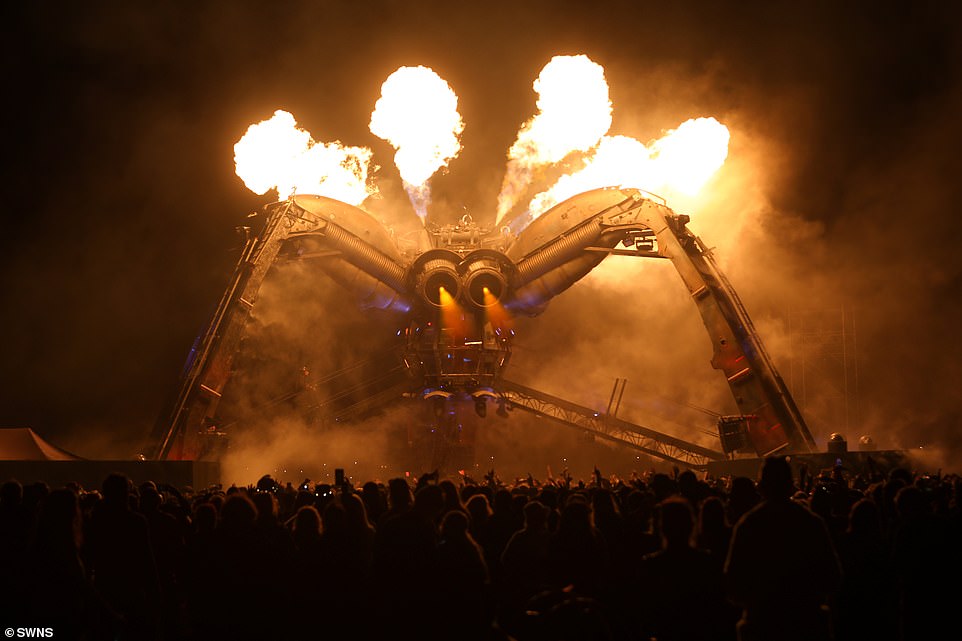 It’s back! Also seen returning to Glastonbury was the iconic fire-breathing spider stage known as Arcadia

Taking to the stage, she said it was a ‘dark day for women’ following the US Supreme Court’s decision to overturn Roe V Wade, as she took to the stage at the Glastonbury Festival on Friday.

The singer, 20, who first made her debut at the festival on The Other Stage at Worthy Farm in 2019, told the crowd she ‘couldn’t bear to think about’ the ruling which ended the constitutional right to abortion in the US, meaning individual states could decide whether abortion could be made illegal.

Also prominent at the festival were many partygate-themed ‘this is a work event’ flags ribbing Boris Johnson – a nod to the PM’s claim that lockdown-busting gatherings were not parties.

Showers hit the festival yesterday morning – and there are fears of heavy rain tomorrow and showers on Sunday afternoon. 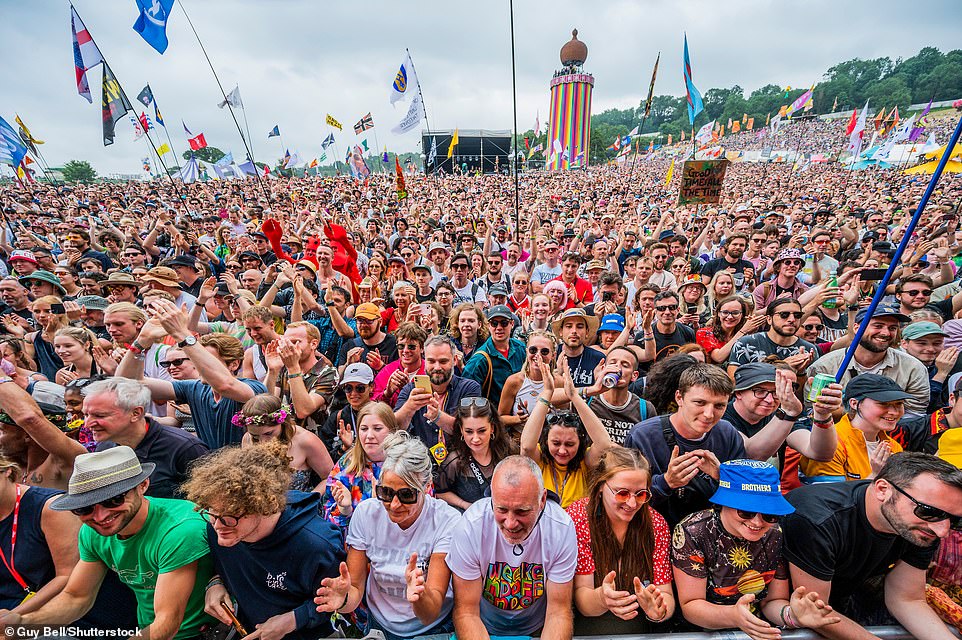 Tens of thousands gathered to watch Wet Leg play the Park Stage, out of an estimated 200,000 to have arrived at Glasto 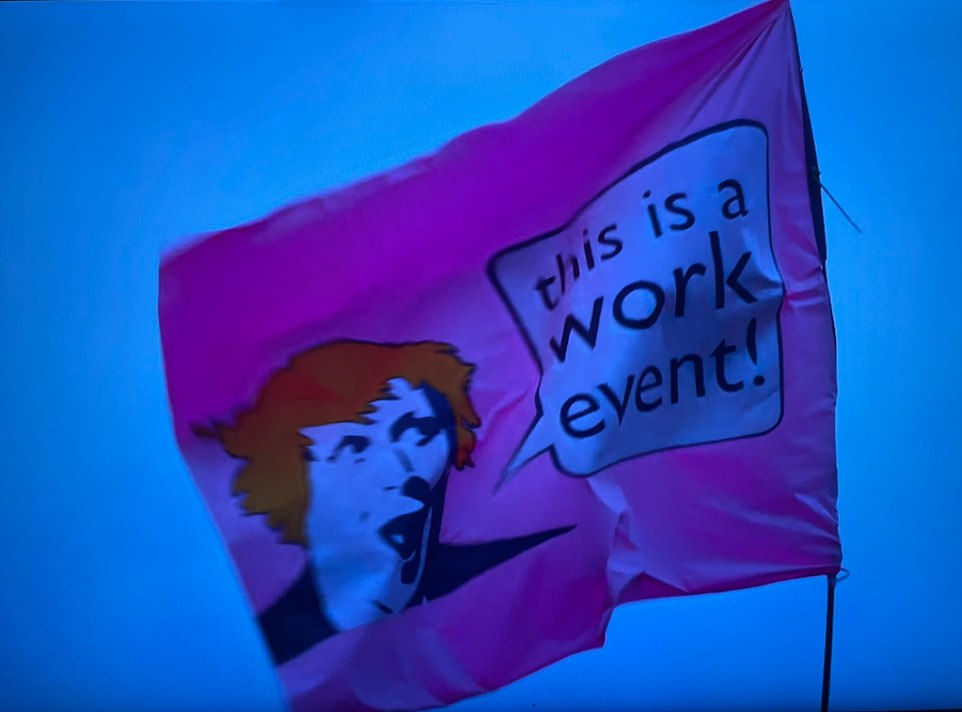 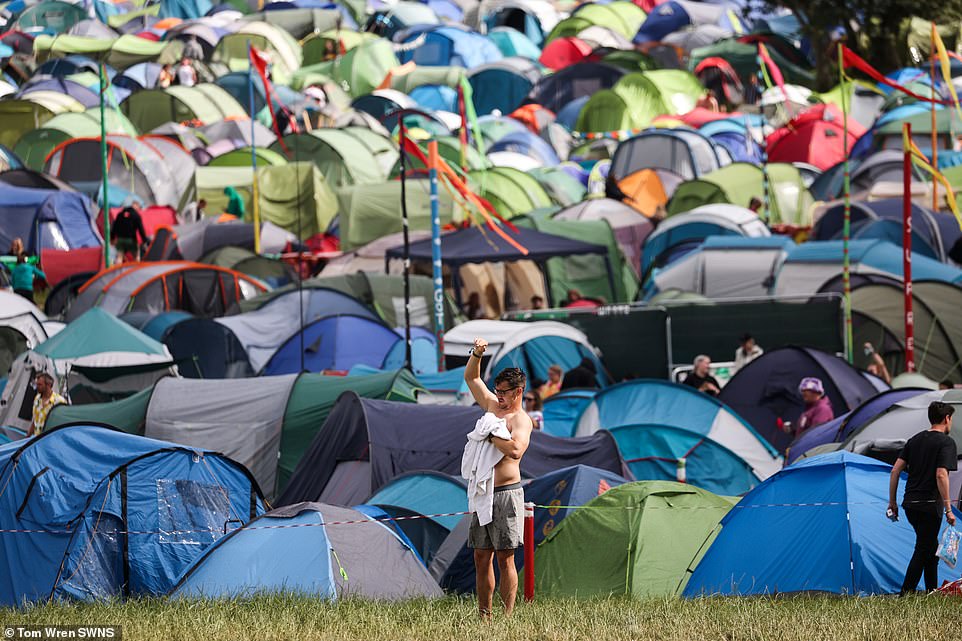 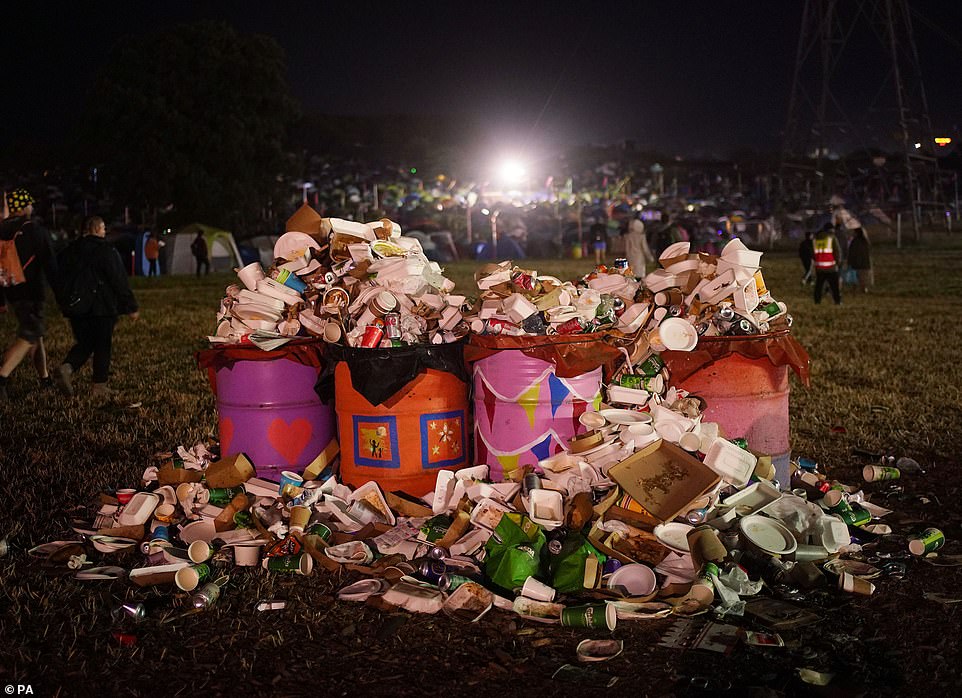 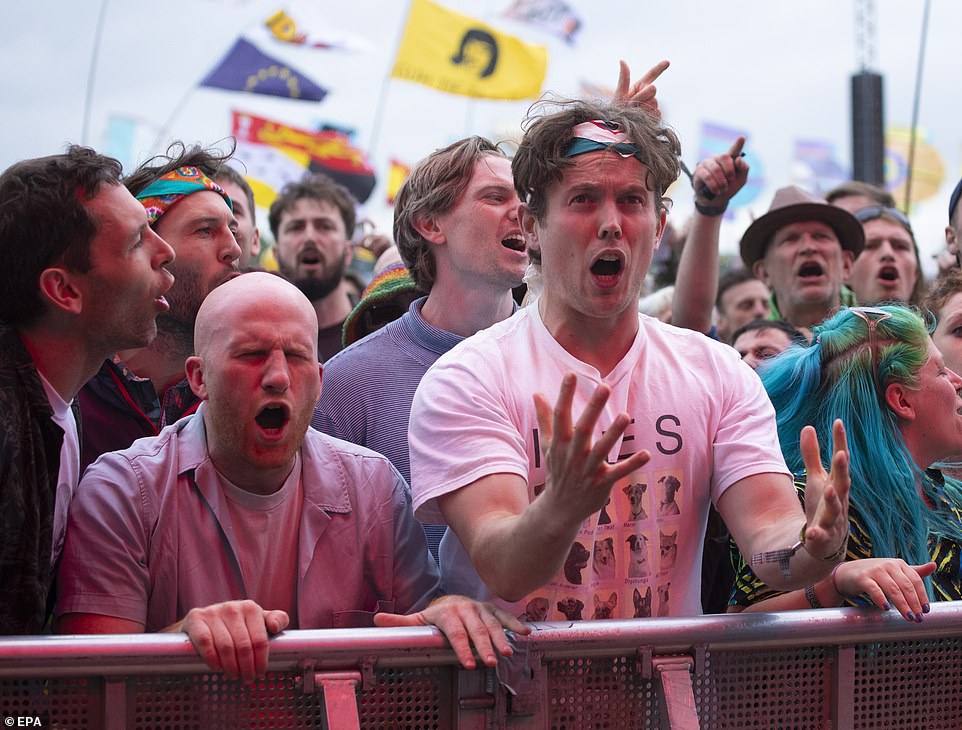 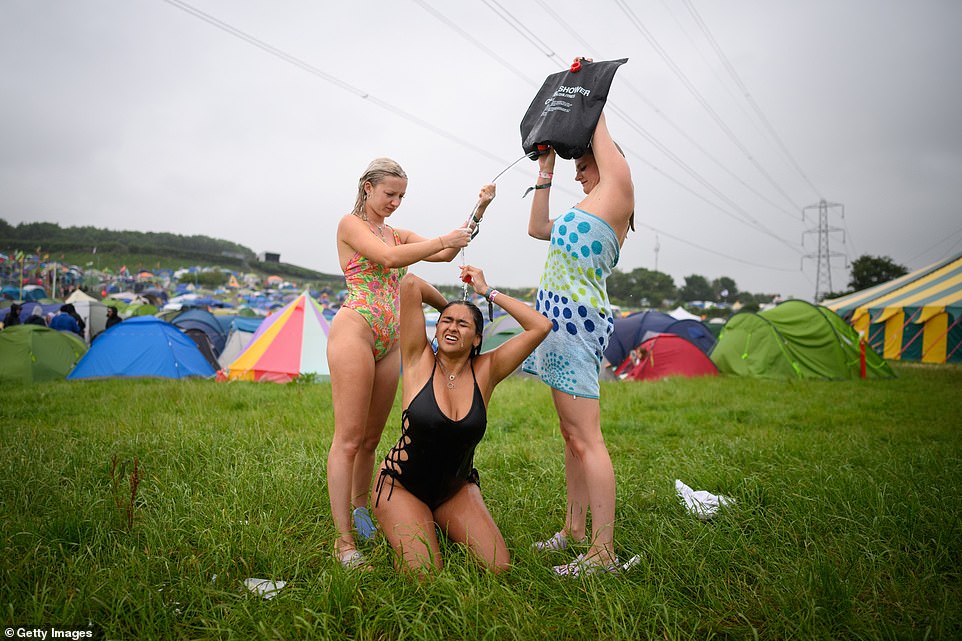