The Ford Kuga PHEV has been a massive hit for the Blue Oval team in Europe. Overcoming an early PR nightmare involving a recall due to batteries catching fire, the car sold in the US as the Ford Escape PHEV was the Old Continent’s most popular plug-in during the 2021 calendar year.

It’s not hard to see the appeal. The PHEV version’s 37-39-mile (59-63 km) WLTP EV figure (EPA: 37 miles) means it can travel further on battery power than some rivals, and in Europe, where running costs are directly linked to CO2 output, the low 23-25 ​​g/km rating has real benefits, including making it look greener than the regular, non-PHEV Kuga hybrid Ford also offers, which gets a 130-132 g/km CO2 rating.

But how close does the Kuga get to its official electric miles rating, and what’s it like to live with? I’ve been running an ST-Line X PHEV for the past 12,000 miles (~19,300 km) in the Long Term section of CarMagazine in the UK and have put together a list of what we think is great, and what we hate, about Europe’s favorite PHEV.

But before we do that here’s a quick rundown of what goes into the car I’m running. PHEV models come with a 2.5-liter inline four mated to an electric motor that together send 222 hp (225 PS) and 147 lb ft (200 Nm) of torque to the front wheels and pull the Kuga to 62 mph (100 km/h ) in a leisurely 9.2 seconds. The final hybrid component is a fairly large 14.4 kWh battery that takes 3-3.5 hours to charge using a 7 kW wallbox charger, and 6-6.5 hours using a regular household socket, which is what I have. 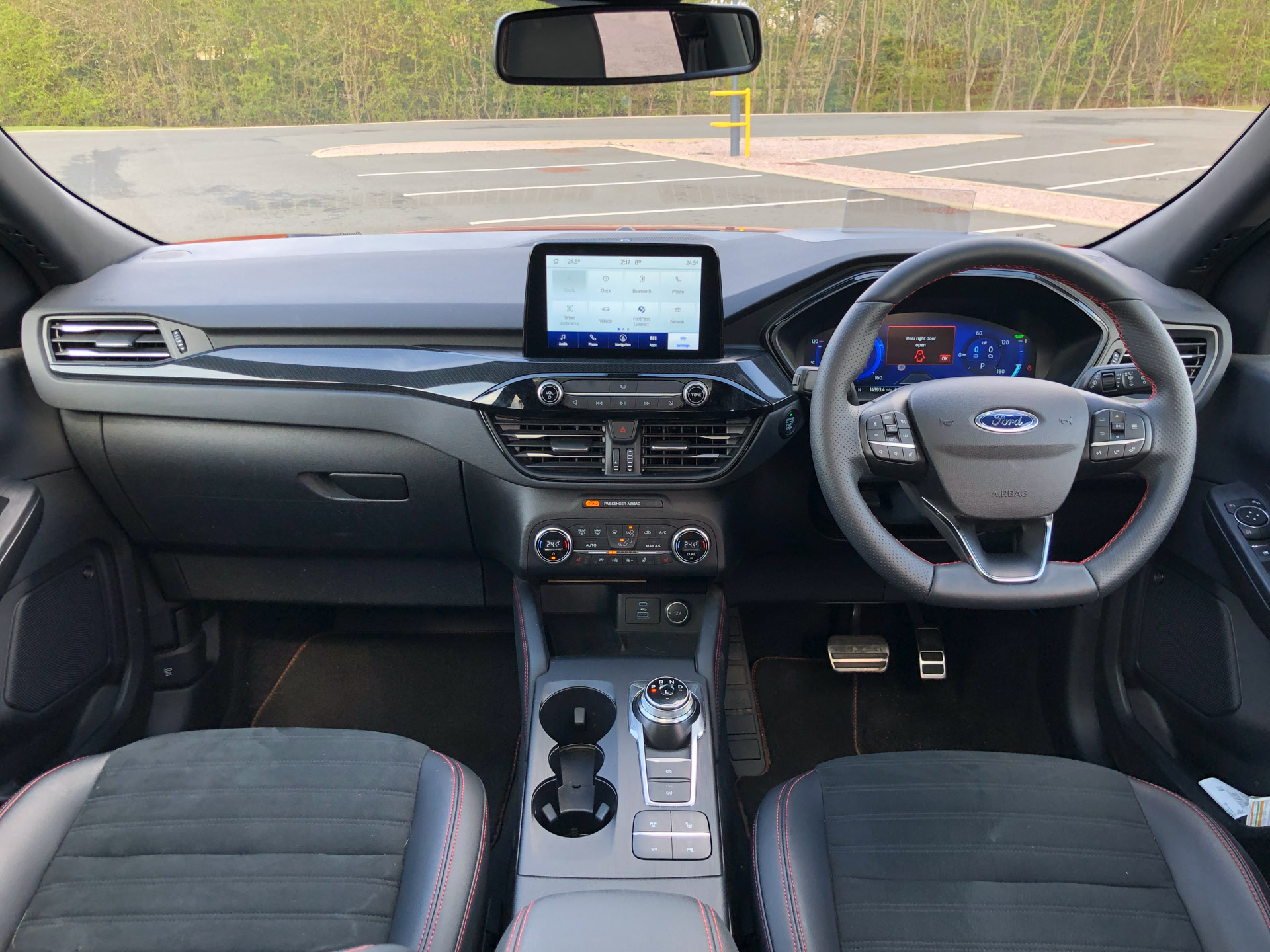 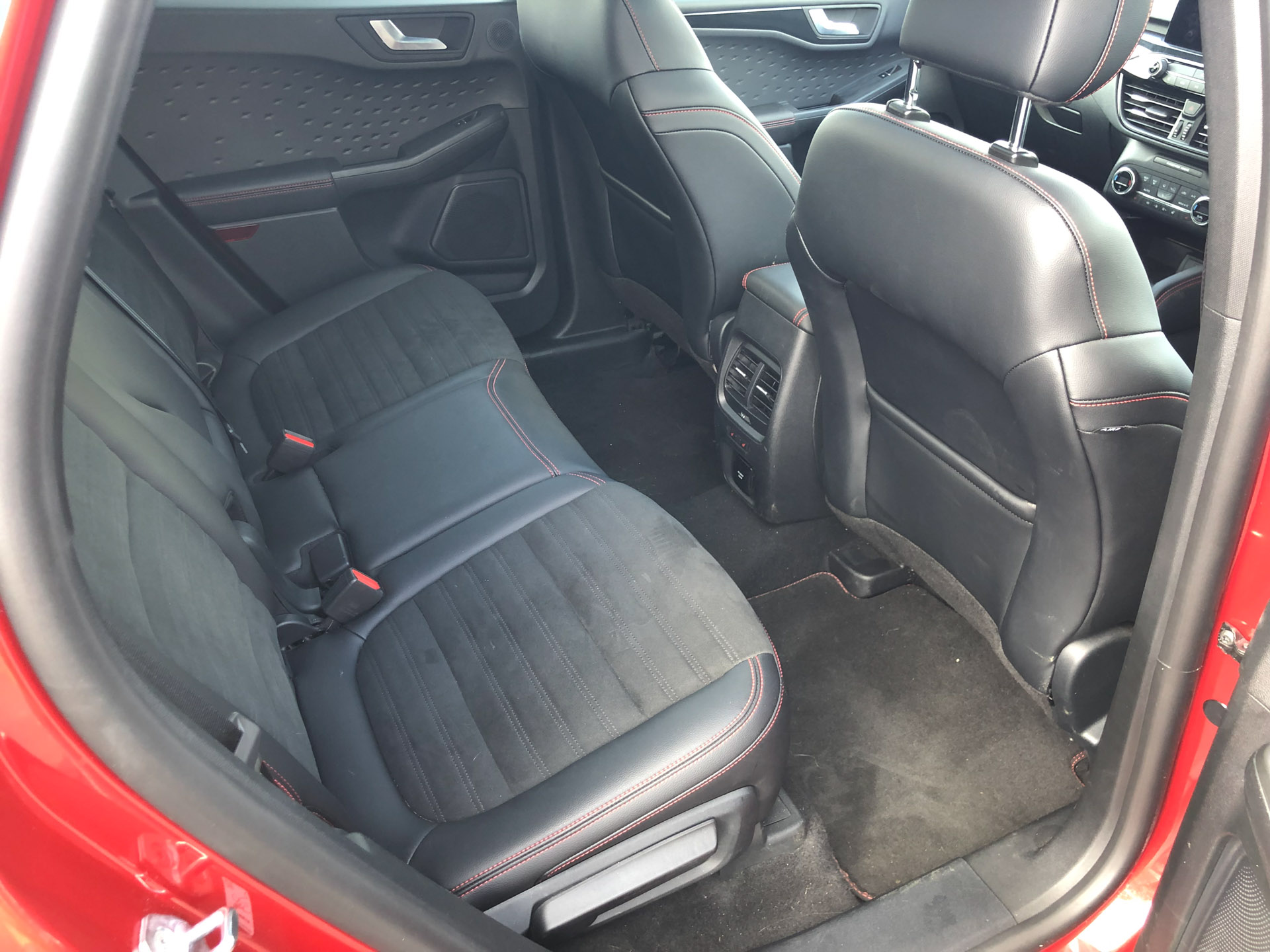 The Kuga/Escape is usefully roomy inside given its fairly compact 182.1-inch/4,626 mm footprint. The back seats slide and the backrests tilt, which means there’s always plenty of room for passengers, and the sliding function helps make up for the fact that the luggage space isn’t quite as huge as in key European rivals like the Peugeot 3008. 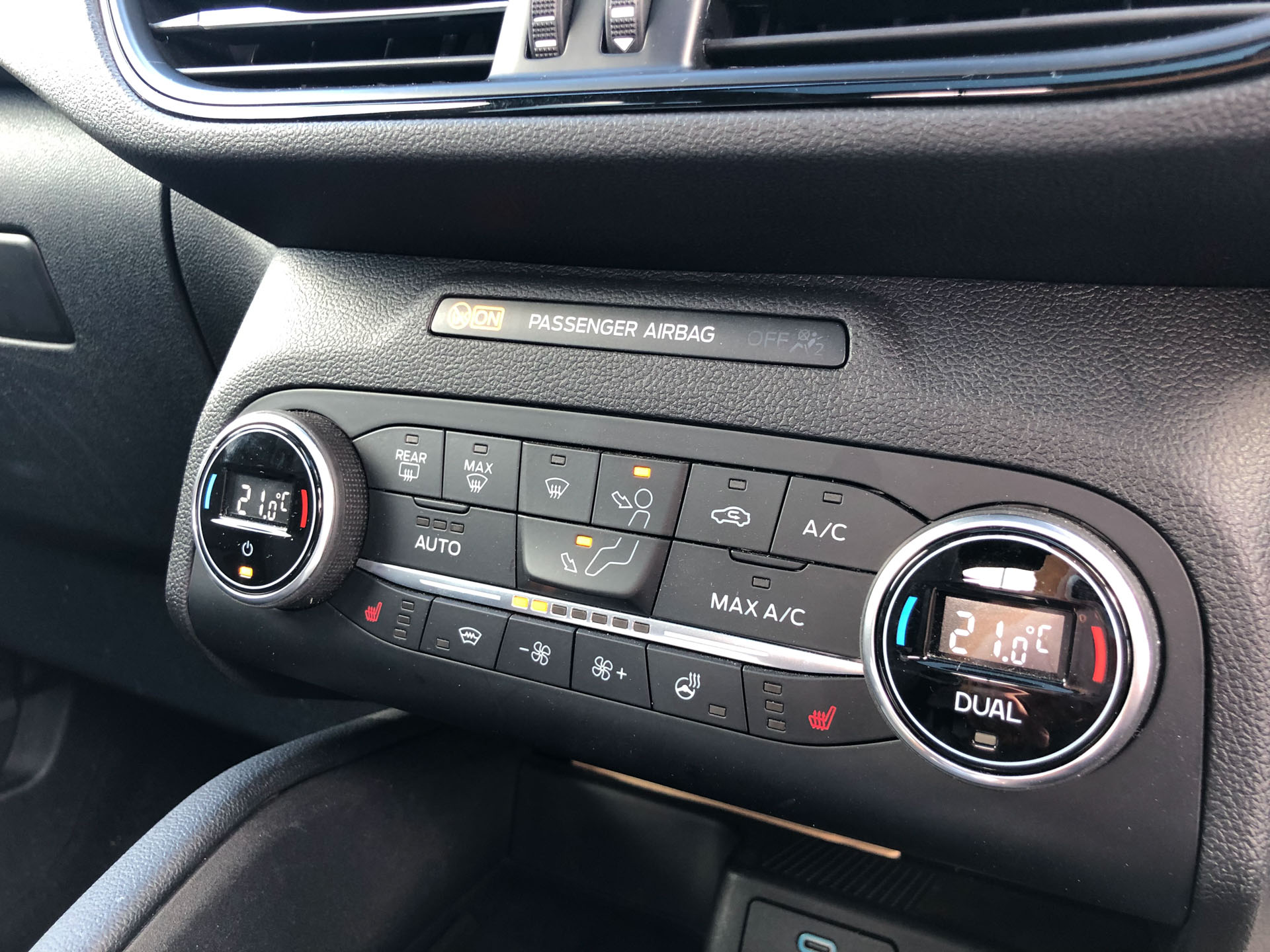 You might disagree, but I hate it when automakers bundle every single control into the infotainment screen. Fortunately, the Kuga still has conventional rotary heating controls and a bunch of buttons. The downside is they’re located very low down and some of those buttons are tiny, meaning you might spend even more time with your eyes off the road than if you were hunting for them in endless touchscreen menus. 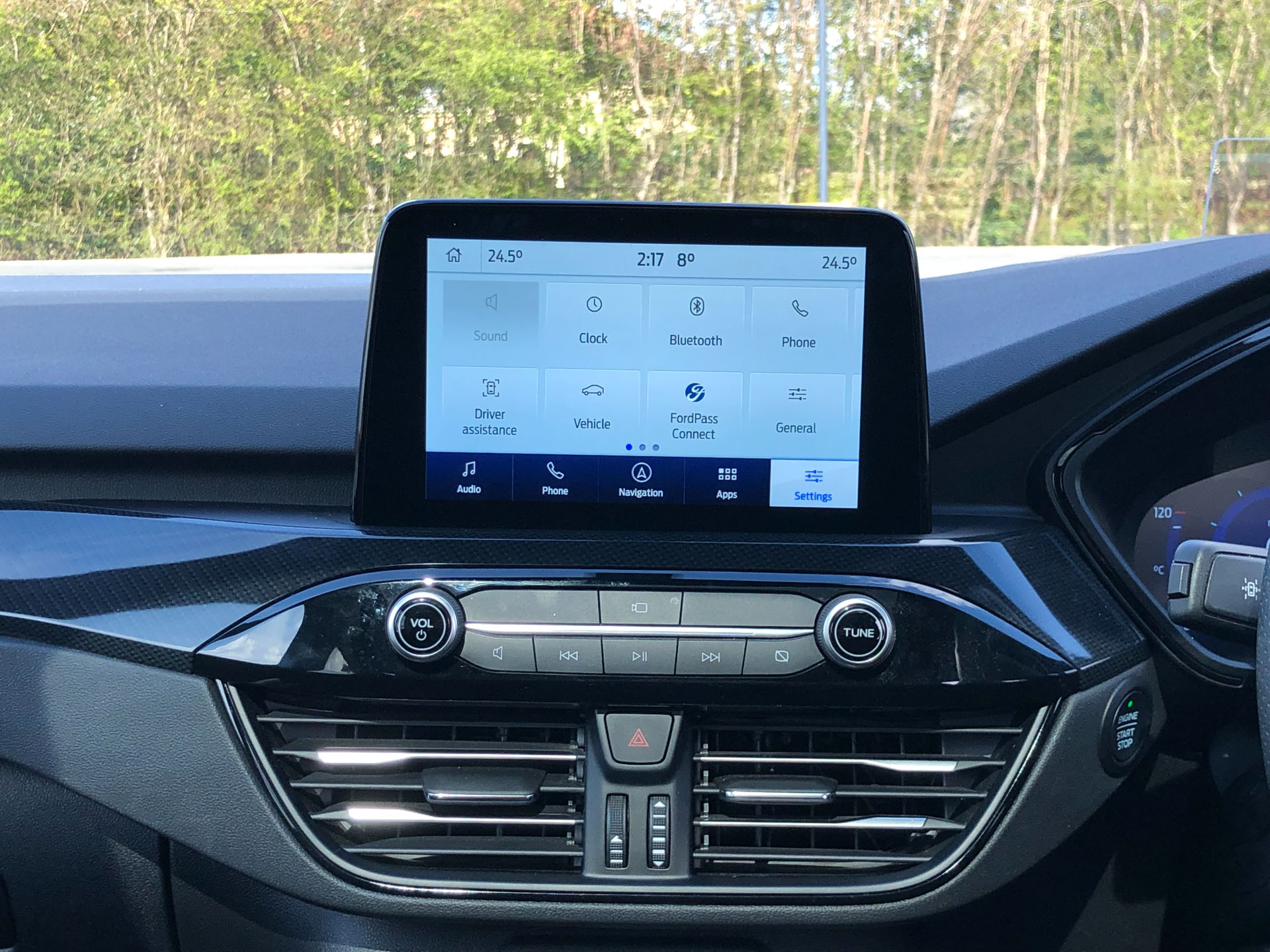 The Focus recently got a touchscreen upgrade as part of its mid-life facelift, and you can bet the same tech will find its way onto the facelifted Kuga/Escape, which our spay photographers have already spotted testing. That’s good news, because the current screen is too small, and the software, particularly in map mode, is very slow to respond. And while we’re griping, why can’t the TFT gauge pack show a full navigation map like an Audi can? 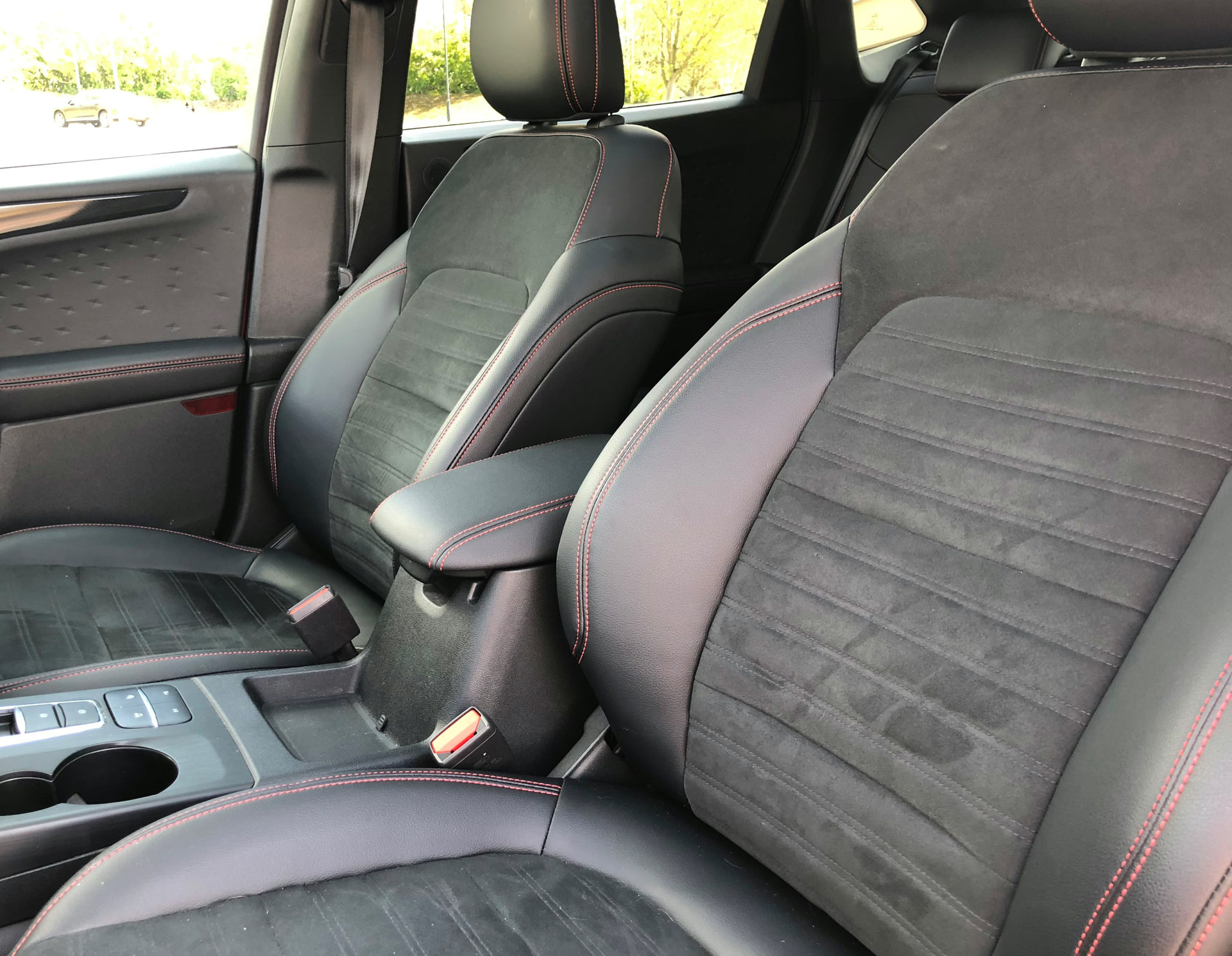 The Kuga doesn’t claim to be a premium product, but we’d have liked to see a bit more wow in the interior. The bottom line is a Skoda feels more upmarket inside in terms of dashboard design and materials. The part-Alcantara seats in our ST-Line car certainly help add a touch of luxury, but though they look sporty they offer almost no meaningful lateral support. 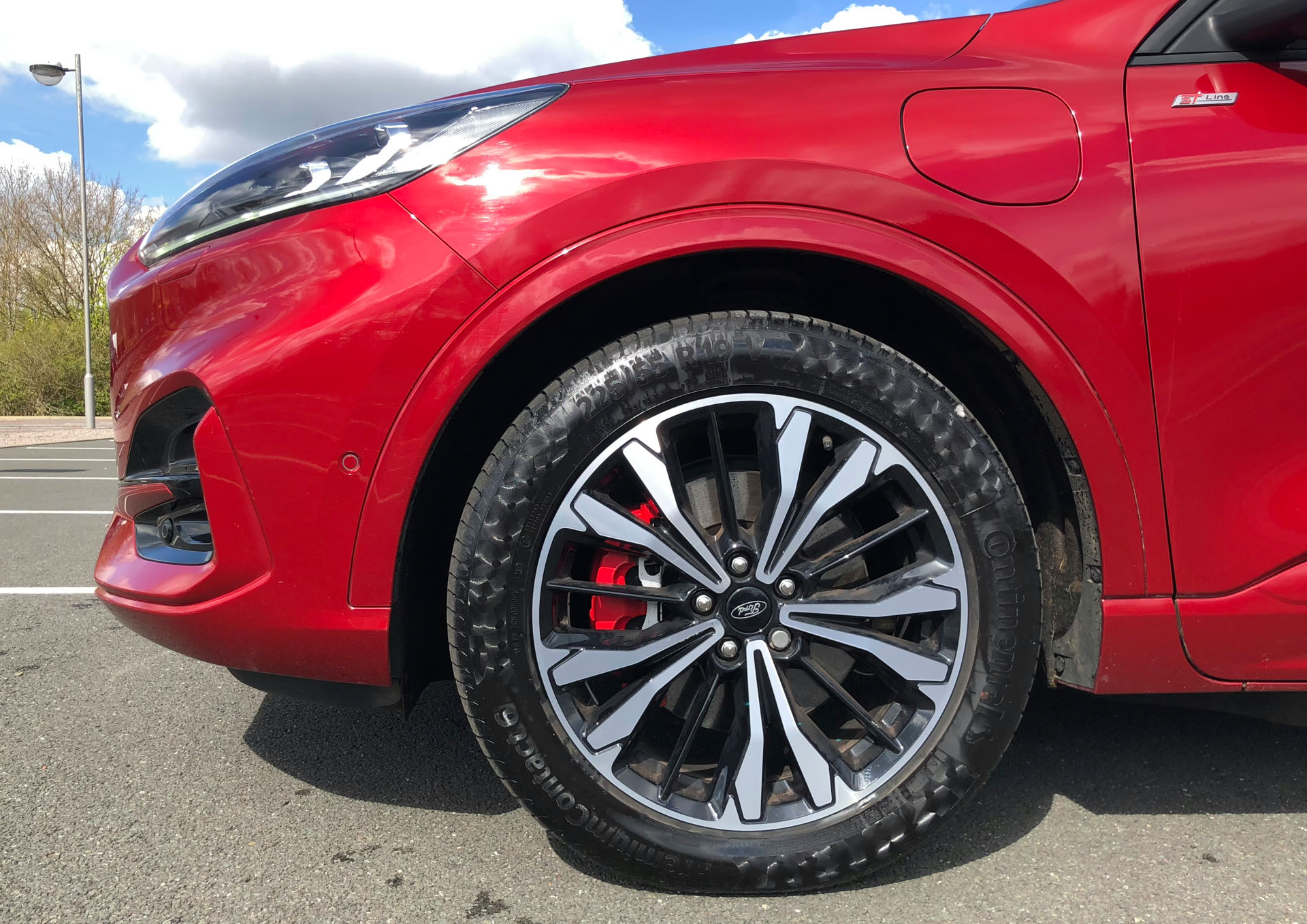 Give me the choice of a straight combustion-engined EcoBoost Kuga and the PHEV for a blast down a twisty road and I’ll take the non-hybrid every time. The 4,065 lbs (1,844 kg) PHEV weighs around 617 lbs (280 kg) more than a regular EcoBoost Kuga, and with no shift paddles to pick through any artificially stepped ratios, the CVT transmission leaves you feeling disconnected when you try to up the pace .

But driving like that seems at odds with what the car is about anyway. And a two-week stint in a soggy, old-shape Nissan X-Trail/Rogue during a Christmas vacation reminded me that even if the Kuga PHEV isn’t the best handling Ford ever, it still feels like a Ford in its steering response and the way body movements are controlled over tough surfaces. That said, I’d like a little more steering weight and a little more fitness dealing with small, hard bumps. 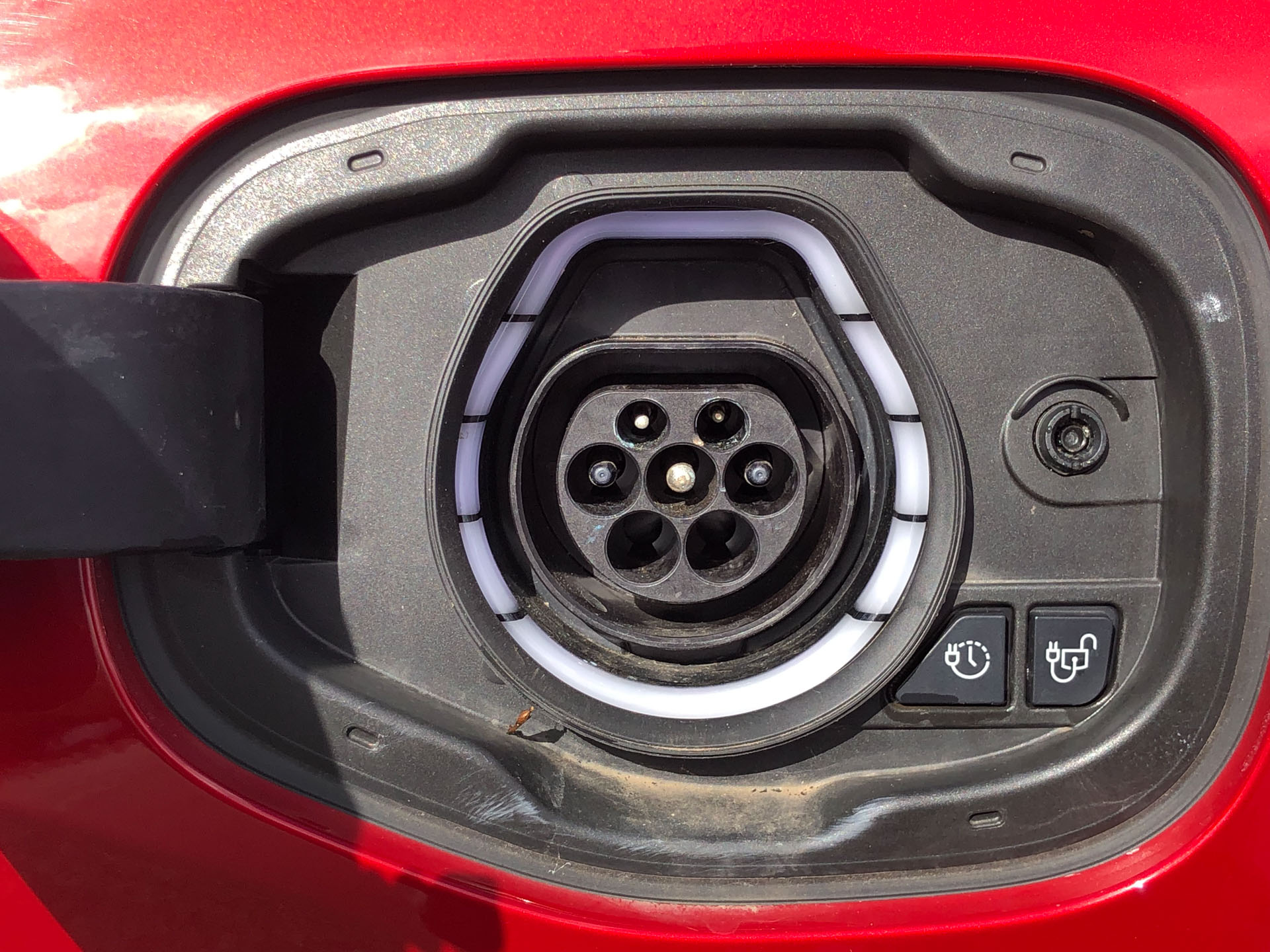 The Kuga’s excellent 37-39-mile WLTP (37 miles/63 km EPA) EV rating is one of the biggest reasons you might buy the Ford PHEV over one of its rivals, and this car didn’t disappoint in real world use. A lead foot will demolish your charge in under 20 miles (32 km) but keep the speeds to below 40 mph (64 km/h), or half of the available EV maximum, and tread lightly on the right pedal and it’s entirely possible to match, or even exceed, the official rating.

Good: Great MPG Even With No Charge Showing

PHEVs are convenient, but you might reasonably argue that they’re the worst of both worlds. Whichever power source you’re running on, you’re dragging the other one around like a dead weight. But the Kuga both impressed and surprised. First, the useful EV range means you can cover more journeys from start to finish purely using battery power. But the surprise was how frugal it was on long, multi-hour trips when the battery indicator was showing that you’d used all of the charge up three counties ago.

Related: What Happens When You Drive A PHEV Without Gas? 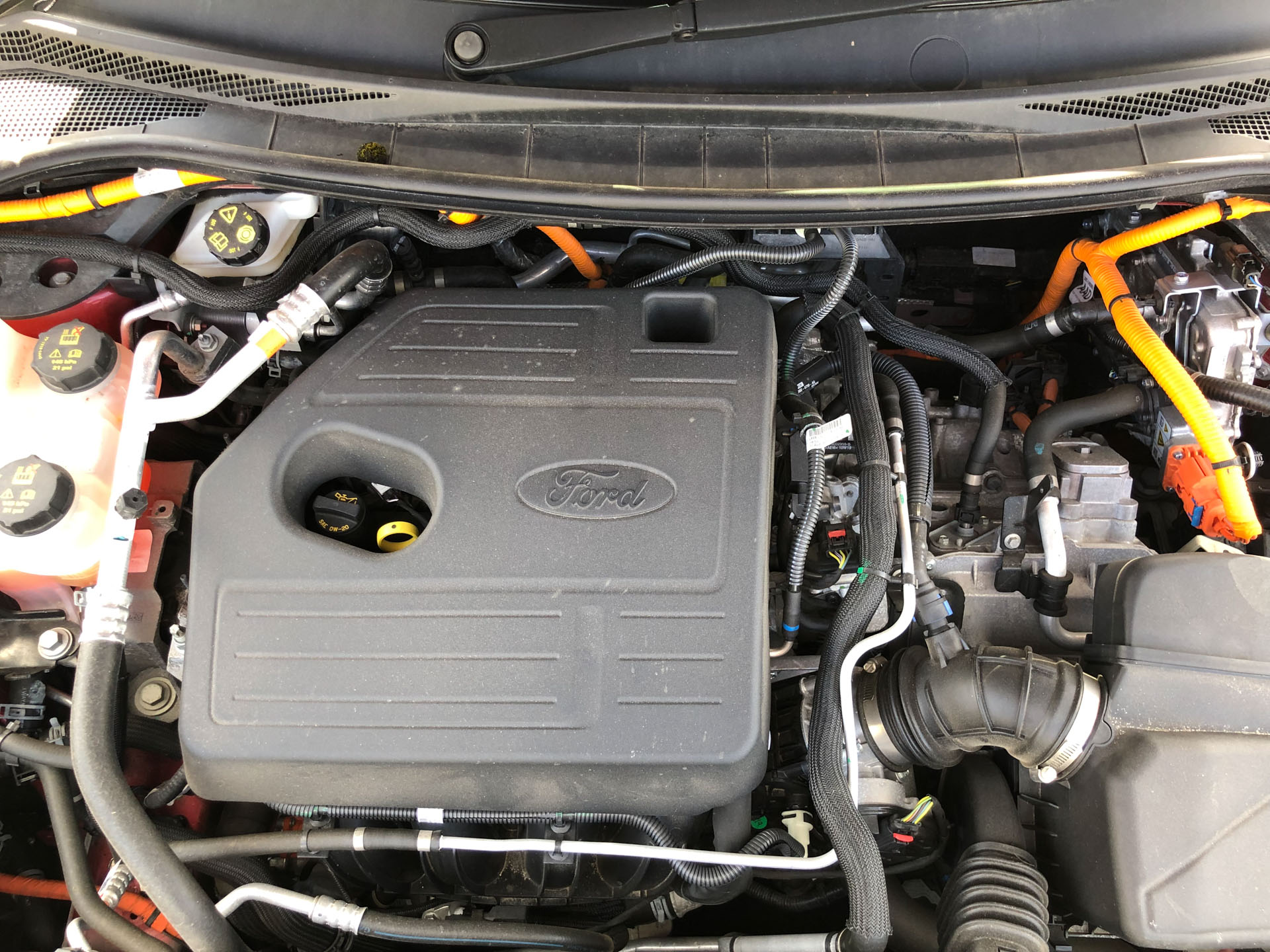 The inline four might be quite big at 2.5 liters, but the Atkinson cycle technology (the same type used in the Toyota Prius) help me achieve over 40 mpg imperial (33 mpg US / 7.0 lt/100 km) driving at fast freeway speeds, and as much as 50 mpg (42 mpg US / 5.6 lt/100 km) when toeing the line regarding speed limits, and keeping my toe out of the gas pedal.

One small chink in the Kuga’s PHEV armor is that very occasionally the thing refused to let you drive in EV mode even when the battery indicator was showing a full charge. Ford says the engine is required to run sometimes to ensure combustion the safety and accurate running of the entire hybrid system, presumably regulating things like temperatures. I’m sure there’s a sound engineering reason, but it’s still frustrating. 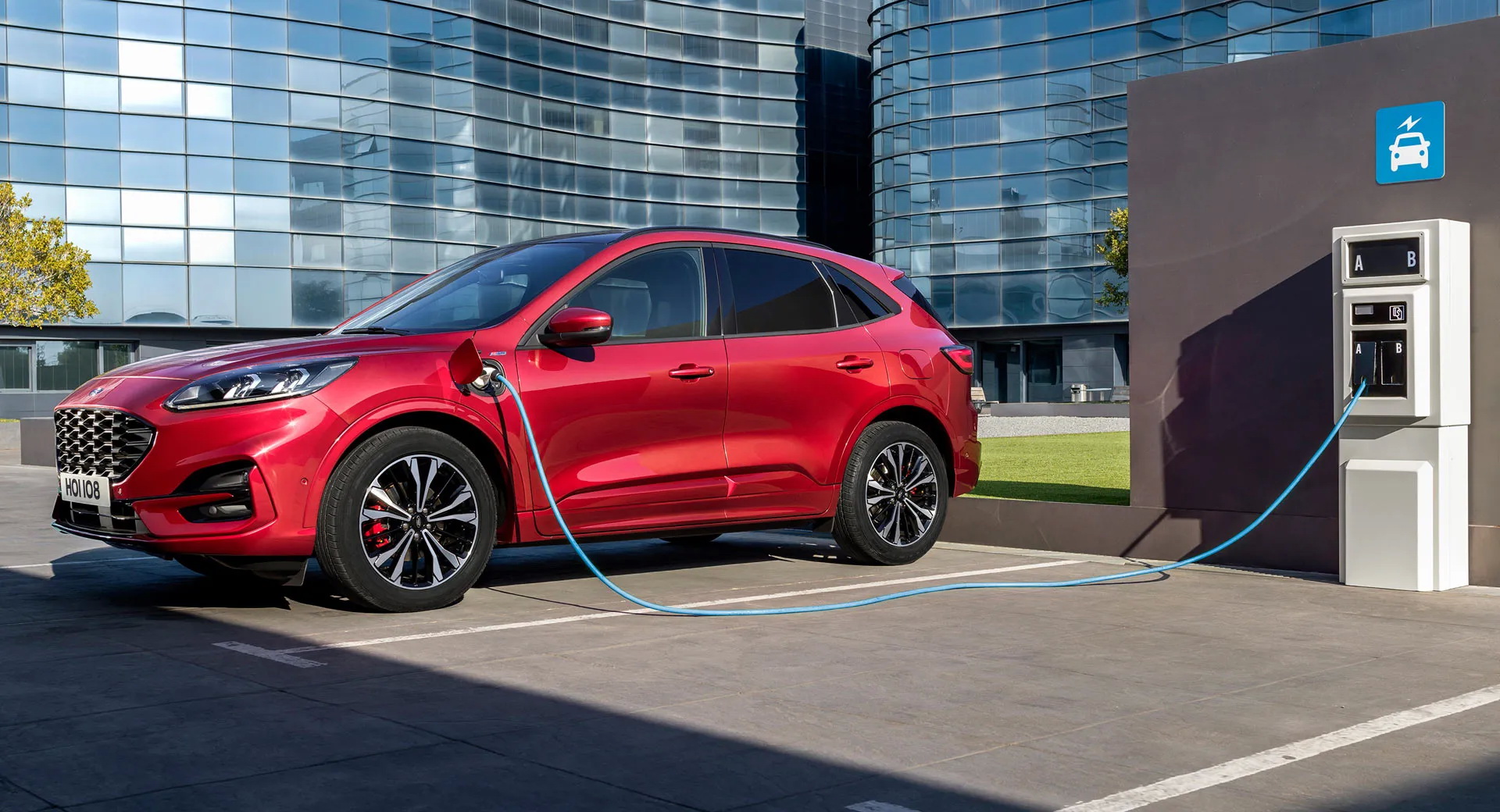 And it’s also worth knowing that the Kuga PHEV, presumably like other plug-ins, can’t operate as an EV if you run out of fuel. As I proved in a test with this car last year, if the SUV senses there’s not enough gas in the tank for the engine to fire it should need to, then it won’t let you drive it, no matter how full your battery is .

I’ve been writing about cars for over 22 years, and while I’ve driven plenty of hybrids and EVs in that time, I’ve never lived with one for more than a few days or maybe a week. But some of you might be in the same boat. You still like and feel comfortable with conventional gas-powered cars and SUVs. So at the start of this test I wondered if I’d actually be won over by this PHEV. And I’m kind of surprised to say I was. 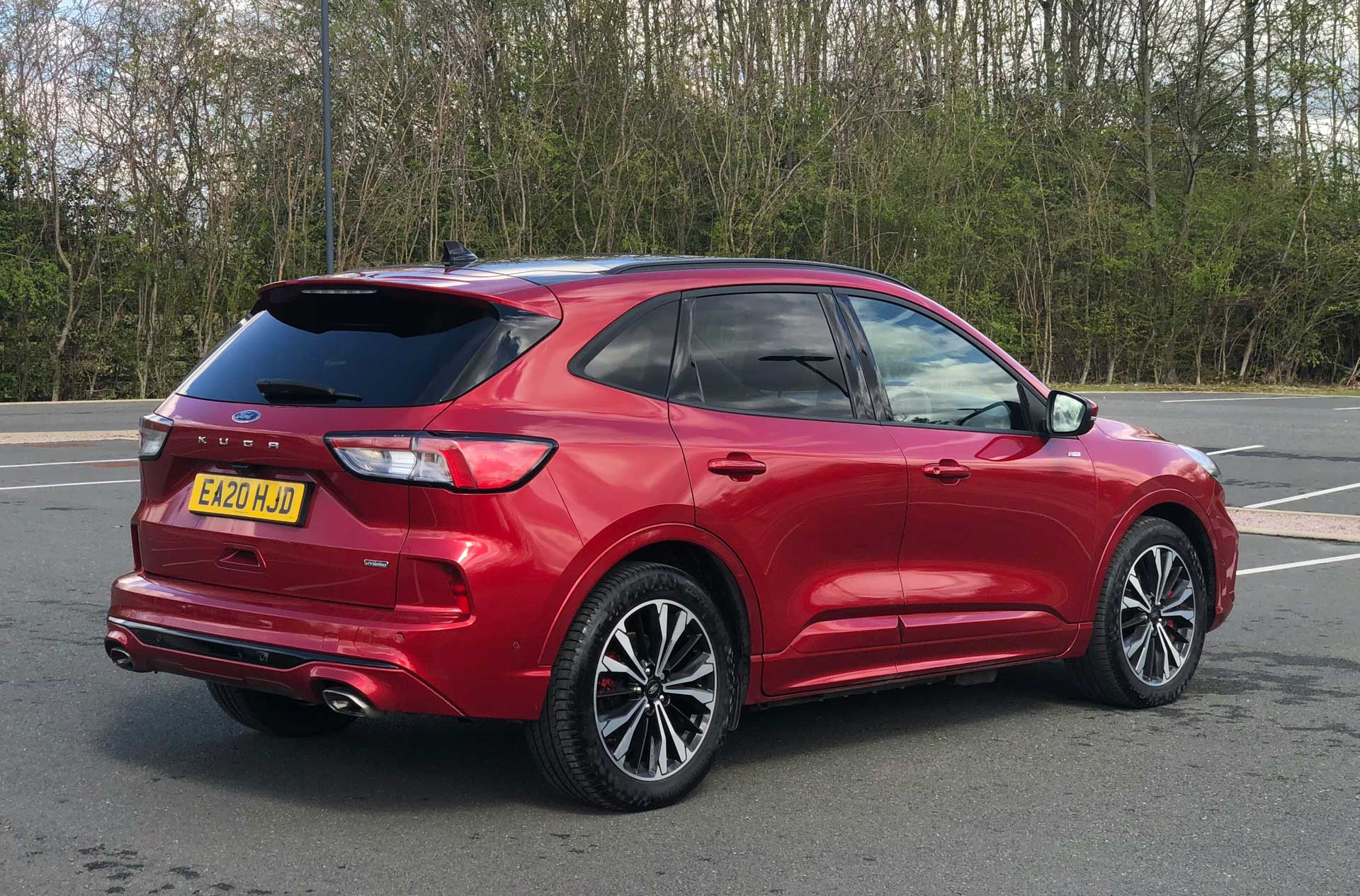 The Kuga doesn’t get everything right but it’s a pretty solid package whatever engine you go for, and it’s particularly impressive in plug-in guise thanks to that long EV range and impressive MPG. I even found myself enjoying gliding along in electric mode and having fun trying to make the most of the available battery charge far more than I expected. It’s not a car your heart would ever ache to own, but your head can see exactly why it was Europe’s best selling PHEV in 2021.