The third generation of the Honda HR-V is a global SUV, despite the fact that North America is getting a different model with the same name. We had the chance to test the EU-spec version, which is exclusively available in self-charging hybrid form, and see how well it stacks up against the numerous competitors from both the small and the compact SUV segments.

Let’s start by saying that the new HR-V represents an important step up from its predecessor in terms of styling, looking more mature than ever before. Honda’s latest design language brought a cleaner profile with a longer bonnet, a single horizontal character line, nicer surfacing, standard 18-inch wheels, and an aerodynamic roofline.

Also Read: The 2022 Kia Sportage GT-Line 2.0 Diesel Will Knock Your Socks Off

The LED headlights look quite aggressive, with the body-colored grille (optionally black-painted) hinting at the electrified nature of the model, and the sculpted bumper reminiscent of the larger CR-V. At the back, the heavily inclined rear windshield is blurring the lines between SUVs and coupe-SUVs, with the high-mounted full-width LED taillights giving it a sexier stance and making it look more premium than its predecessor.

Honda has priced the HR-V against the compact SUV segment, in combination with giving it plenty of standard kit and the aforementioned premium looks. However, the fact that it is mechanically related to the Jazz / Fit makes it better suited for the top end of the small SUV segment. The footprint of the HR-V has grown, and it is now measuring 4,340 mm (170.9 inches) long, 1,790 mm (70.5 inches) wide, and 1,582 mm (62.3 inches) tall, with a wheelbase of 2,610 mm (102.8 inches) . This makes it slightly larger than all of the rival B-SUVs such as the Peugeot 2008, but smaller than mainstream C-SUVs like the Nissan Qashqai. The closest rival in terms of footprint is the Toyota C-HR which also comes with a self-charging hybrid powertrain. 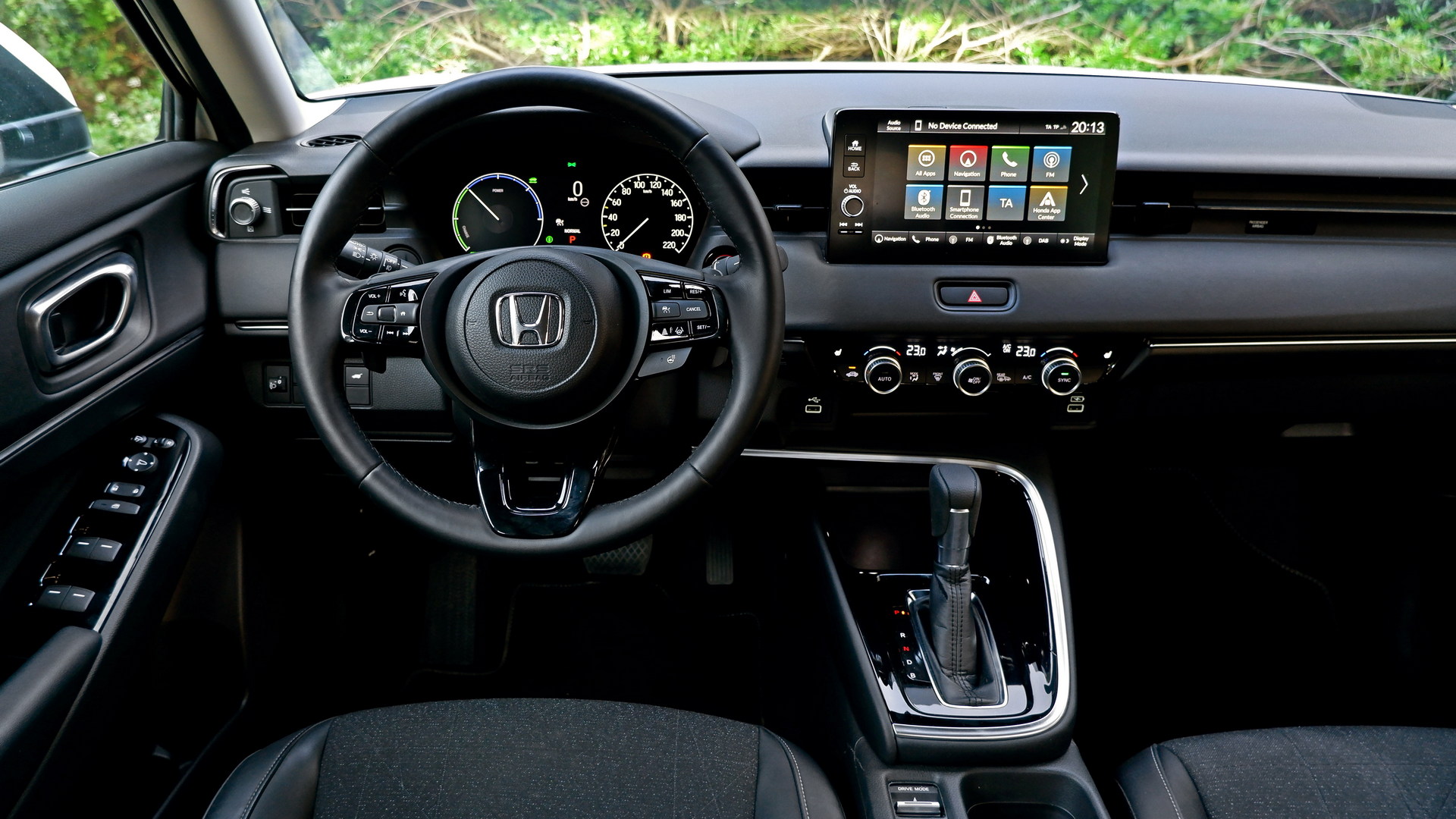 Moving inside, the upmarket feel is accentuated by the minimalist design of the dashboard. The driving position is a bit higher than the previous generation, with good visibility and a slightly low roof. Despite the hard plastics on the dashboard, everything is well put together with a horizontal line connecting the climate vents and the nice patch of upholstery underneath increasing the perceived quality. Overall, the interior of the HR-V feels a lot more upmarket than the Jazz / Fit, bringing it closer to the premium feeling you get in a Honda e.

Ergonomics are very good, with the physical controls for the air conditioning being both stylish and easy to use. The buttons on the steering wheel need a little bit of getting used to, but they provide access to many features. Honda’s infotainment has a very simple menu structure, always-on touch shortcuts, physical buttons for the Home and Back functions, plus an actual volume knob. The standard high-mounted 9-inch touchscreen – same as in the Jazz – is responsive, even though not as fancy looking as the multi-screen setup of the Honda e.

Also Read: I Live In An Apartment Without A Parking Spot. Here’s My Range Anxiety Experience With An Electric Car 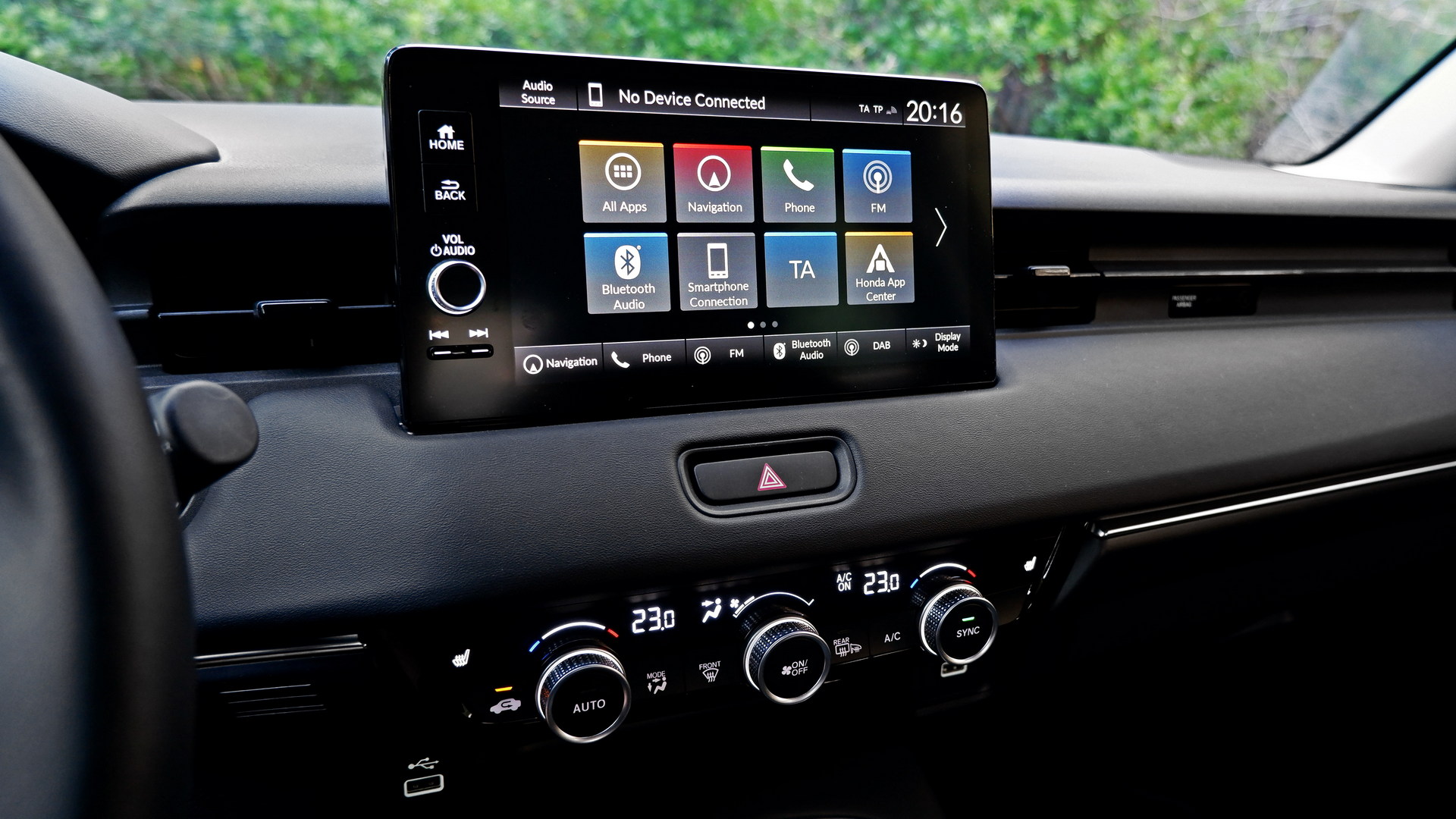 In terms of connectivity, the HR-V has everything you need, besides the fact that the Android Auto is wired-only, unlike the wireless Apple CarPlay. Our mid-spec Advance trim had four USB ports for charging (two for the rear passengers) but no wireless charging pad which is only standard in the flagship Advance Plus alongside fancier upholstery color combinations and a better sound system. Still, our six-speaker audio was good enough, especially for Honda standards.

What is less impressive than other SUV rivals is the semi-digital instrument cluster which doesn’t offer many customization options. You can choose the information you want to show up inside the left dial, since there is no rev counter, but you don’t get any fancy graphics like in the Ford Puma, various layouts like in the Skoda Kamiq, or 3D-style dials like in the Peugeot 2008. 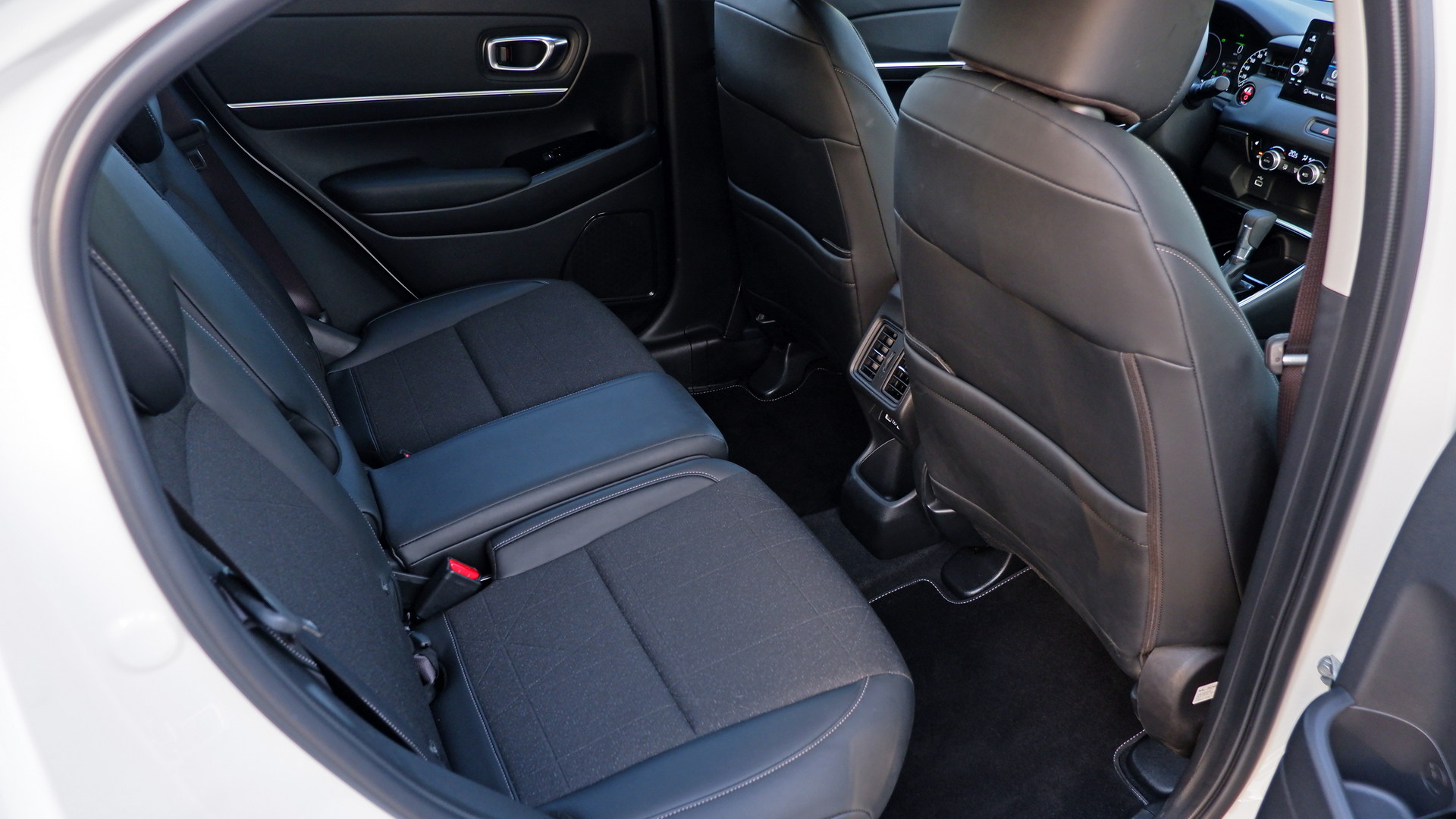 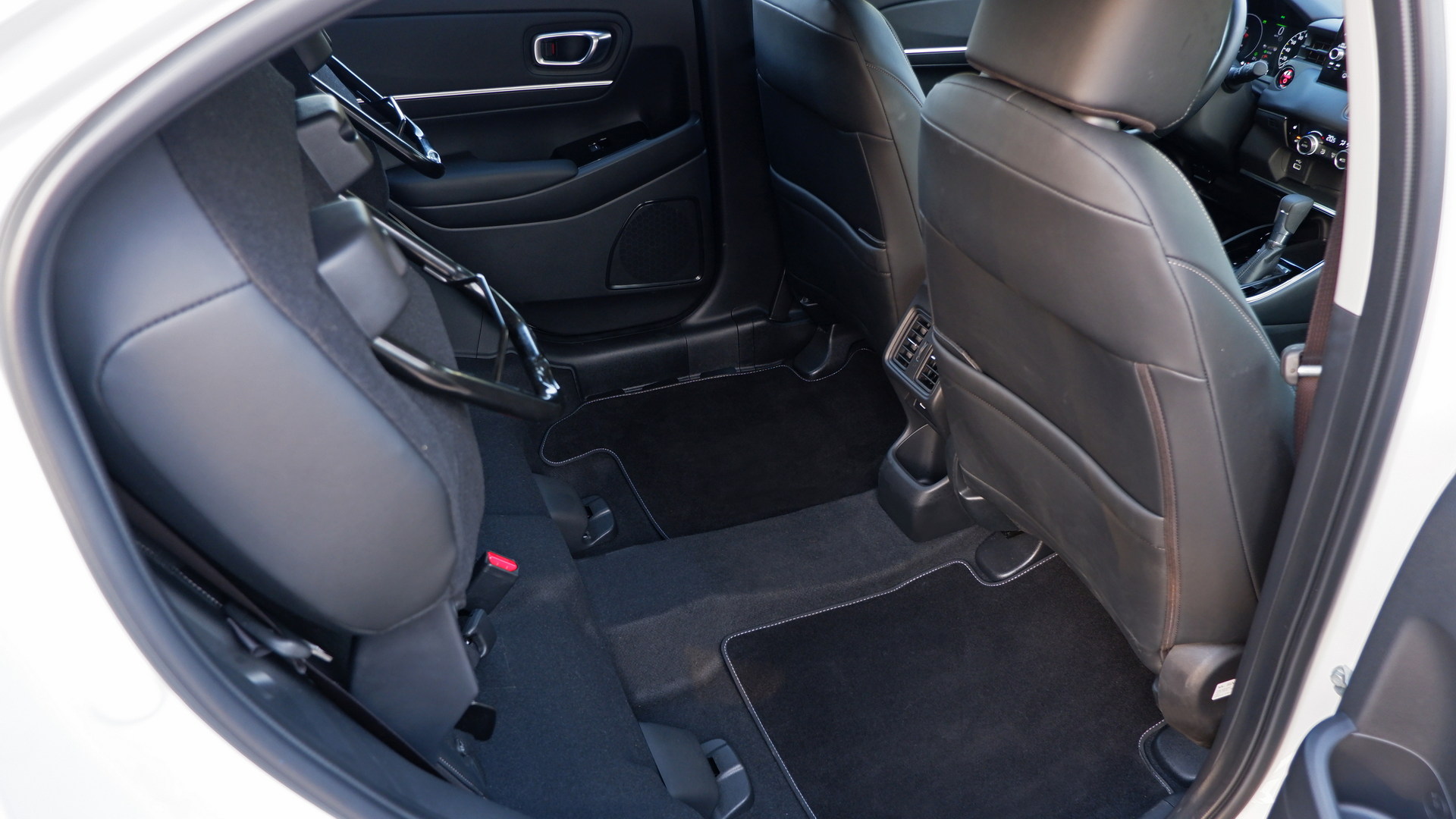 Cabin space and practicality are very important for SUV buyers, and the HR-V is better than average in this regard. There are heaps of legroom for the rear passengers who also get access to rear climate vents, but the rear headroom is a bit limited for taller people due to the inclined roofline. Anyone that is up to 6 feet tall will be very comfortable at the back, with the exception of the middle seat which is not comfortable due to a bump on the rear bench. Another thing we didn’t like that much is the central armrest which feels a bit clumsy while resting on the rear bench.

There are no proper rear door bins but the seatbacks have nice pockets with extra room for your smartphone. Also, Honda’s signature Magic Seats have the ability to flip upright individually, making space for larger objects. The seats can also fold completely flat, creating a van-line cargo space of up to 1,305 lt (46.1 cubic feet). In five-seat configuration, the cargo space is 335 lt (11.8 cubic feet), which doesn’t sound like much on paper, especially if you compare it to the 500 lt (17.7 cubic feet) of C-SUV models like the Nissan Qashqai or the Peugeot 3008. In reality, it feels larger than numbers suggest, thanks to its practical shape that will be appreciated by families. It also has an extra compartment hidden under the floor, except for the top trim where this space is occupied by a subwoofer.

A Hybrid For Smooth Drivers 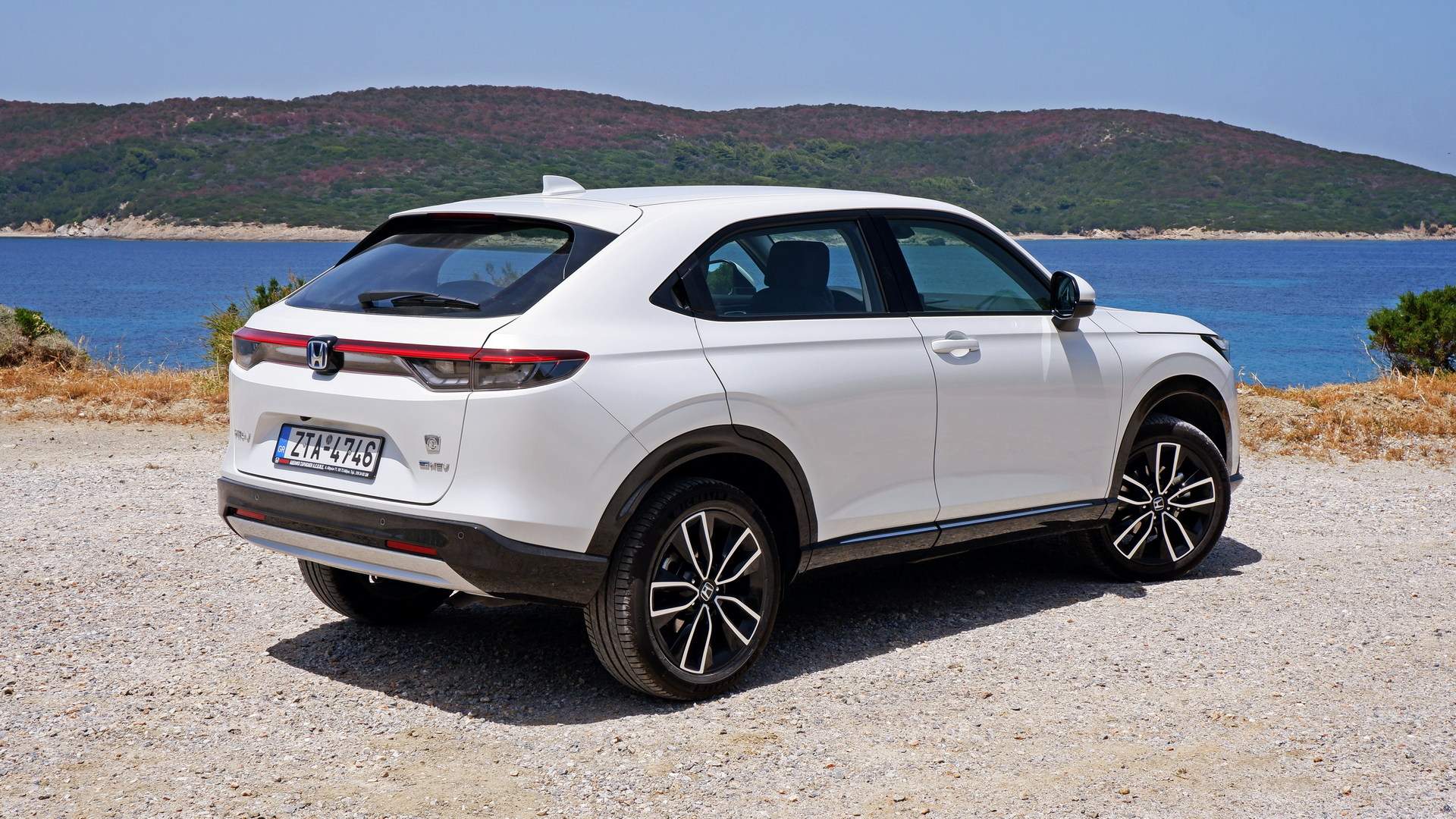 The e:HEV system on the Honda HR-V is improved compared to the Jazz / Fit with increased power output and a larger lithium-ion battery. Thus, you get a combined 129 hp (96 kW / 131 PS) and 253 Nm (187 lb-ft) of torque from the naturally aspirated 1.5-liter i-VTEC four-cylinder engine and a pair of electric motors which is less than in the Civic e:HEV. Don’t let the number of engines fool you, since the HR-V is FWD-only in Europe (only Japan gets AWD variants). Most of the time, one of the electric motors will be powering the front wheels, and the ICE will turn on and off automatically when needed, working as a generator.

In the city, the HR-V is quiet thanks to the clever hybrid setup, the improved noise insulation, and the refined ride. It also feels rather quick and responsive, with the light steering wheel making it agile despite its generous footprint. Fuel consumption in the urban cycle can be as little as 3 lt/100km (78.4 mpg) since you mostly ride on EV mode in heavy traffic, while the average we saw in different kinds of scenarios was 5.6 lt/100 km (42 mpg) . 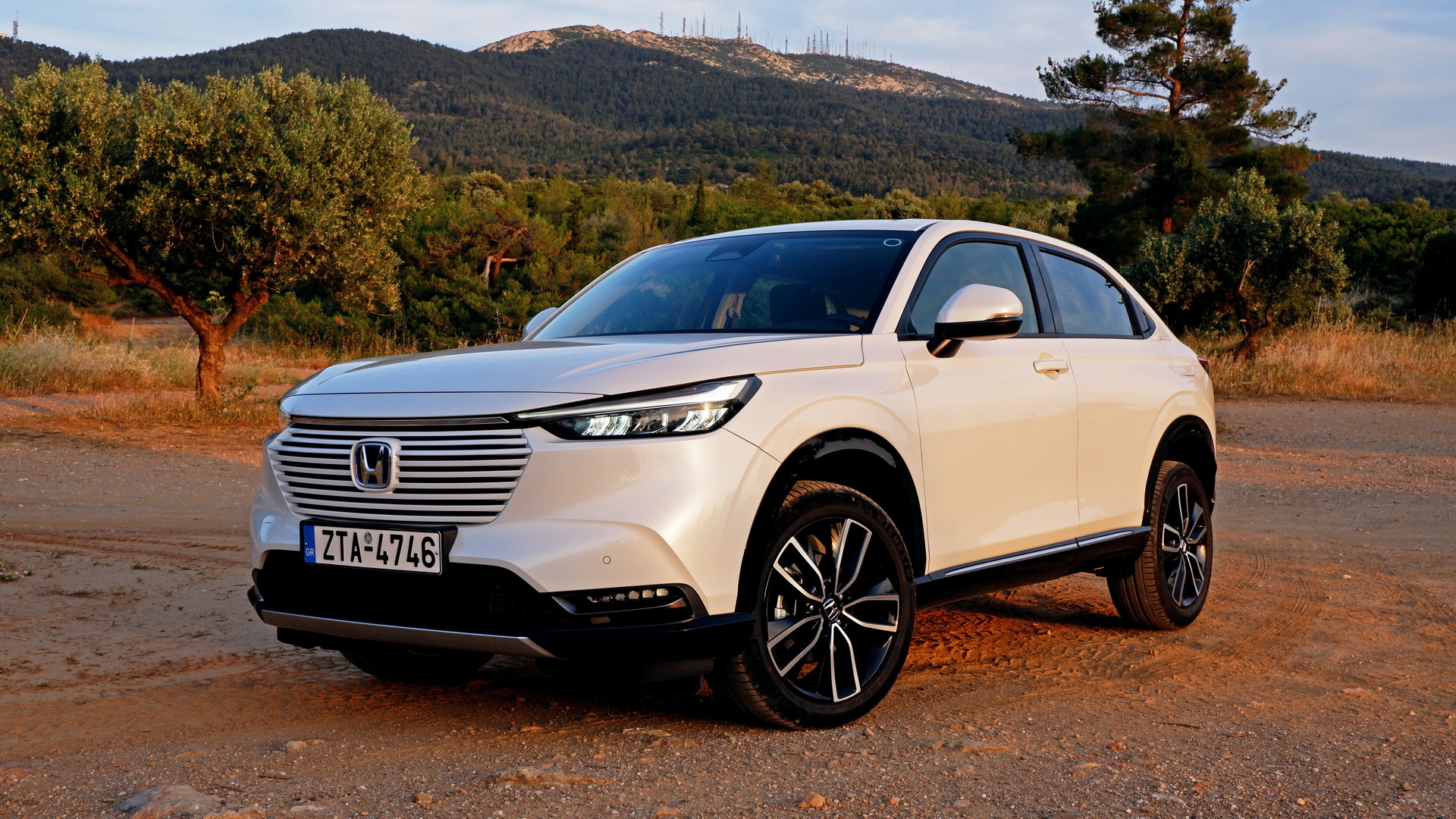 Things are a little bit different when you start to push the hybrid powertrain on the highway. The previously quiet engine becomes very loud, with the eCVT gearbox keeping it constantly in high rpms in order to extract the maximum combined output. After the initial 0-100 km/h (0-62 mph) acceleration which feels faster than the advertised 9.7 seconds, you get a lot of noise and little action. As a result, the acceleration above 120 km/h (75 mph) and up to the 170 km/h (106 mph) top speed feels a bit sluggish compared to turbocharged rivals.

The situation is similar on twisty roads where the driver will think twice before stepping on the gas pedal in order to avoid the fuss. The Sport driving mode makes the powertrain a little bit more responsive than in the Normal and Econ modes, but doesn’t really inspire you to push. For those who loved the manual gearbox of the previous generation, the behavior of the eCVT can be frustrating. Unlike other manufacturers who use faux gears on CVT transmissions, the paddle shifters behind the Honda’s steering wheel are only there for choosing the level of regenerative braking, showing that this is a comfort-oriented proposal. 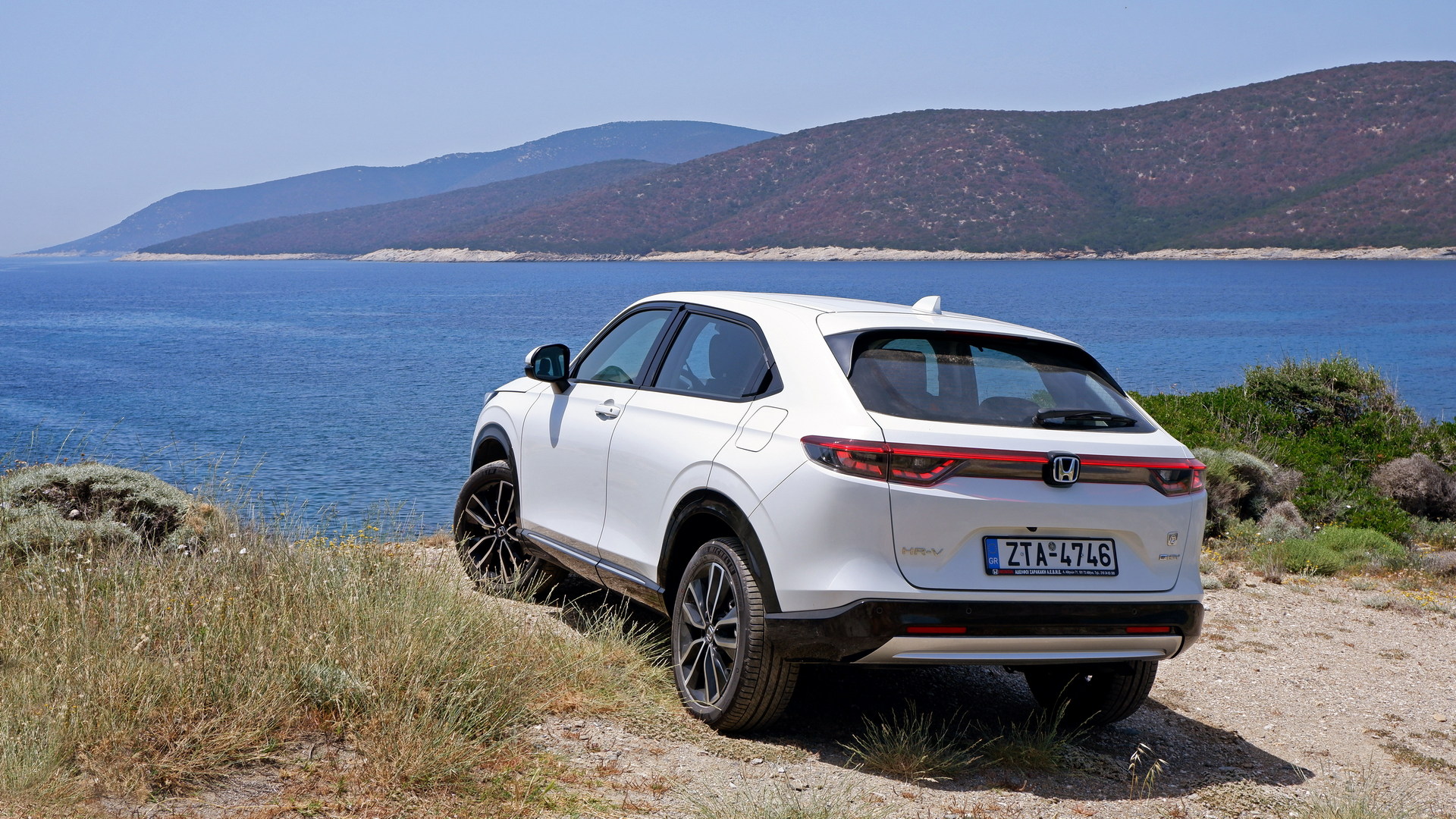 Still, the HR-V has good handling capabilities, with noticeable but not excessive body roll and high levels of grip. The suspension is soft over bumps but not too soft in the corners, which is perfect for this SUV’s character. The steering initially feels nicely weighted around the center but in B-roads, it has a sterilized feel to it though it’s still fast and direct. Brakes are also good despite the hybrid nature of the car. Off the beaten track, the FWD-only layout (as with most of its SUV rivals) limits its capabilities, but the generous ground clearance of 188 mm (7.4 inches) and the good off-road angles will give you great confidence.

Overall, the HR-V doesn’t get near a Ford Puma in terms of dynamic capabilities, won’t go as far off-road as an AWD Suzuki Vitara, nor approach the plush ride of a larger Citroen C5 Aircross, but it strikes a nice balance for the average driver thanks to its refined chassis and premium characteristics. 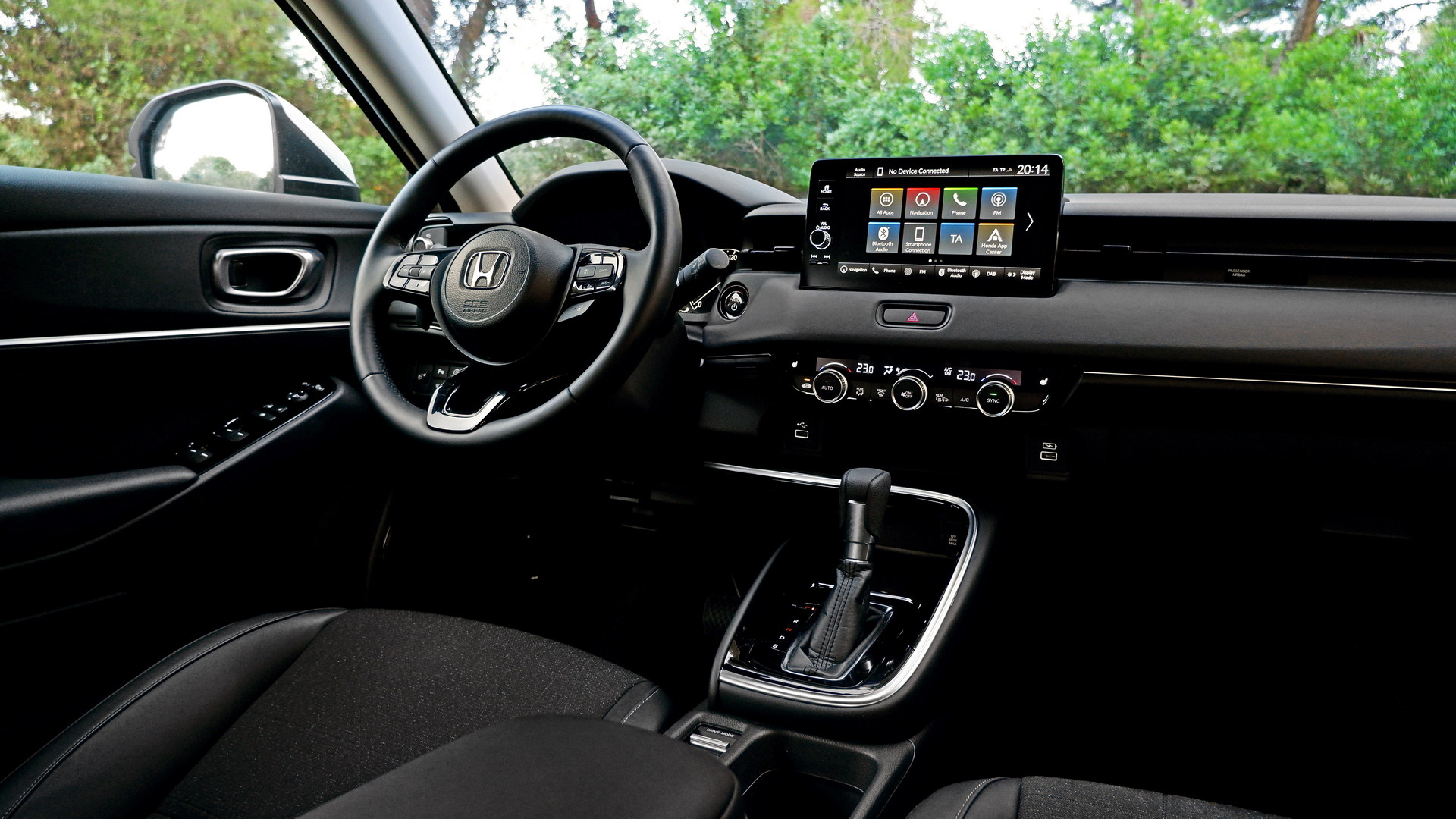 The Honda HR-V has a very simple lineup in Europe, with a single powertrain option (e:HEV) and three trim levels – Elegance, Advance, and Advance Style. All three come with plenty of standard kit, supporting Honda’s upmarket move. From the entry-level Elegance you get the entire Honda Sensing ADAS suite with all of the modern driving aids including the smooth Adaptive Cruise Control and Lane Keeping functions, a 9-inch infotainment, heated front seats, rear A/C vents and 18- inch wheels. The Advance adds dual-zone air conditioning, LED lights, a leather-wrapped and heated steering wheel, an automatic tailgate, and two additional USB charging ports for the rear passengers. Finally, the Advance Plus is visually distinguished by the two-tone exterior with roof rails, orange accents and special badging on the grille, and the leather-style upholstery inside the cabin. As we mentioned earlier, it gets a premium sound system and a wireless charging pad. 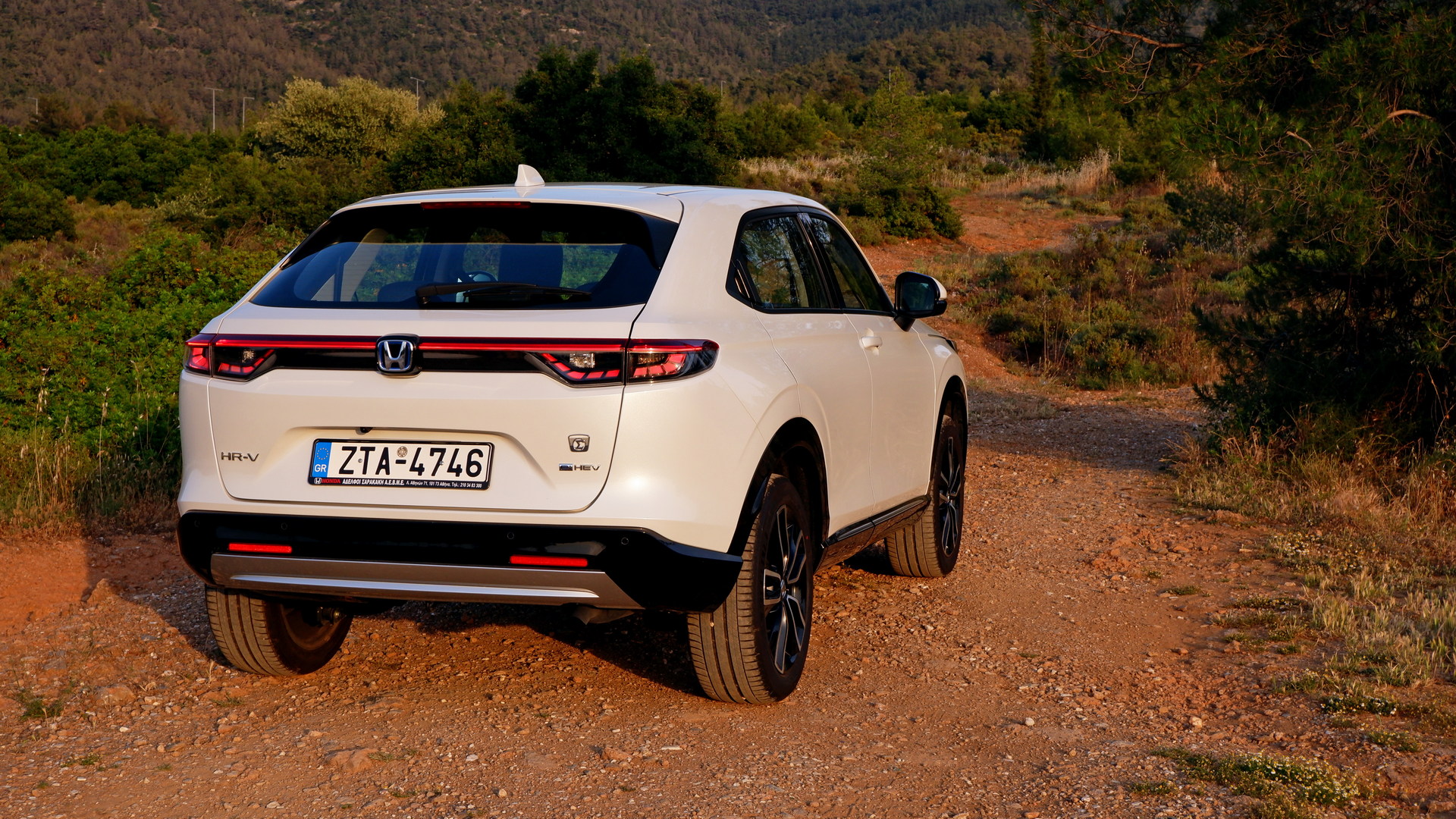 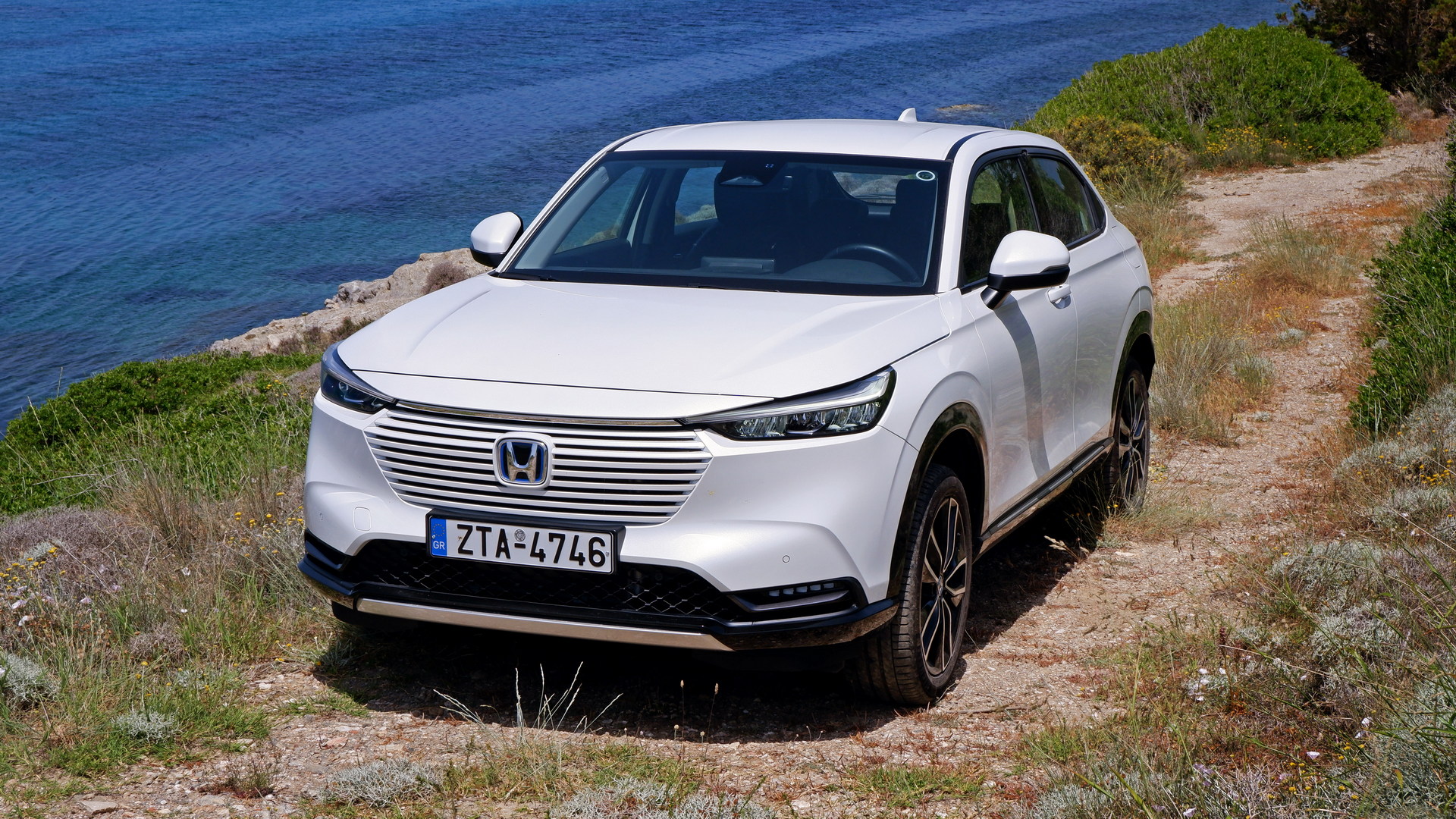 The EU-spec Honda HR-V has matured in its third generation, becoming a more stylish and premium SUV while retaining most of its practicality traits. It is slightly less roomy than its predecessor, but the interior looks nicer with heaps of rear legroom, the magic seats, and a boot that feels larger than the numbers suggest. The e:HEV hybrid powertrain is quite efficient but can get noisy when you really push it to its limits. Driving-wise, the HR-V isn’t on the sporty side of things, being more of a comfort-oriented proposal with a refined ride and a pretty generous ground clearance. It comes with plenty of standard equipment but pricing is one of the main hurdles, placing it against larger and more competent rivals.