The Morgan 3 Wheeler was one of the biggest performance car surprises of the last decade. Resurrecting the concept of the trikes that made it famous before WWII with a modern V-twin motorcycle engine, Morgan figured it would sell a few hundred units, but ended up shifting more than 2,500 between 2011 and 2021 when production ended.

Now the 3 Wheeler is back after a fairly radical update. The most obvious of those updates is the loss of the motorbike engine up front, but there are many equally seismic changes under the skin because this is an all-new machine. Have those changes spoiled the character of one of the most personality-laden vehicles any amount of money can buy? We headed over to Morgan’s Malvern HQ to grab the keys and find out.

Big Changes, And Not All Visible

It takes you all of two seconds to realize that the new 3 Wheeler is no mere facelift of the old car. That one looked like a tin bathtub with a bike engine strapped to the nose. It had a simple steel chassis onto which the aluminum panels were attached. It didn’t only look retro. It was retro. it felt retro.

But the new 3 Wheeler is a much more balanced mash up of old and new. It’s longer and wider to create more passenger space. It has an aluminum monocoque, the first in Morgan’s 113-year history, and the superformed aluminum panels have a much more sophisticated shape that moves its point of inspiration forward about 20 years from the early 1930s to the early 1950s and the dawn of the jet age.

The old car’s engine dominated the aesthetic, but the surprise here is that the new car doesn’t look any less interesting without it because the rest of the design has upped its game. The way the rear bodywork tapers below the belt line means it’s much more attractive from behind, and the 20-in disc-style wheels reinforce the mid-century vibe. 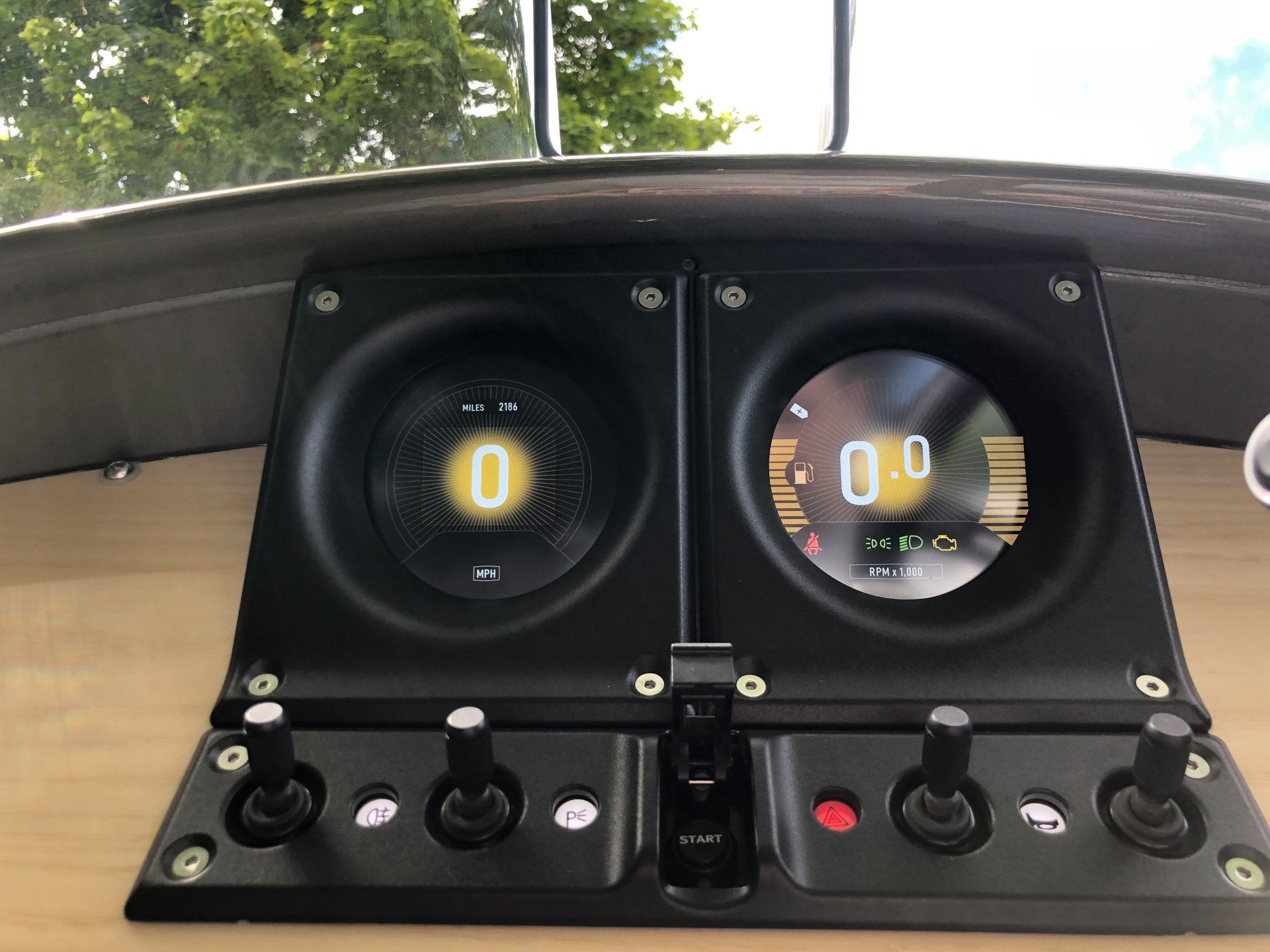 That cold war theme is carried over inside the cockpit thanks to a pair of digital instruments housed in binnacles that make you think you should be using them to track the progress of Soviet MiGs, not track your speed down the A44 to Leominster. Those gauges, like the equally retro bank of toggle switches below, and all of the interior fabrics, are weatherproofed because there’s no convertible top. Morgan’s designers did make some very early sketches about how a very basic roof might work, but decided not to bother. So if it rains, you’ll get rained on, but there is a tonneau cover to keep the interior dry when you have to leave the 3 wheeler parked up.

Getting in means clambering over the side, standing on the seats (ours had a hardy technical fabric, but waterproofed leather is also available), and sliding your way into the footwell. The seat doesn’t move, but both the pedals and wheel do, so it’s easy to bring both to you, though the gearstick remains the same distance from the seat and might be a stretch for shorter drivers. Another surprise: I expected to be sitting with my legs out straight, like in a classic sports car, but in fact you sit with your ass quite a bit higher than your feet. 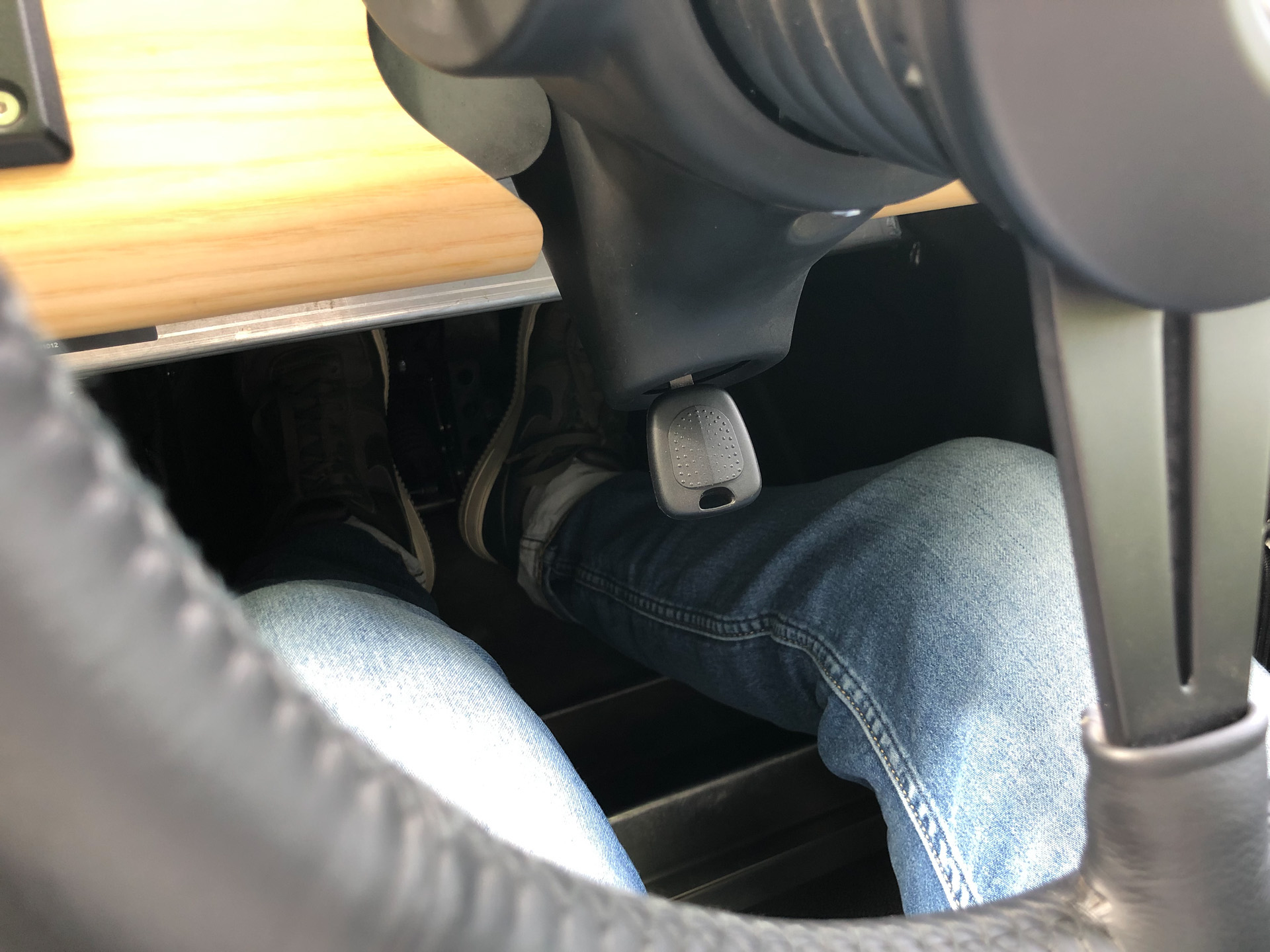 Let’s fire this thing up. First, you have to fiddle with the key. Remember them? The Morgan’s ignition barrel is actually pointed at your legs, and though I never came close to banging my legs against it, if you have the kind of keychain that make people think you’re a 19th Century jailor, with all kinds of metal hanging off it, you might find it annoying.

Key twisted, you flip up the small “missile launch” flap between toggles on the dashboard, press the tiny starter button and wait to see if the new engine can live up to the charisma of the old one. It’s a tall order, and the details on-paper suggest it hasn’t got a chance because Morgan has swapped the old S&S V-twin, which could no longer meet European emissions regulations, with a 1.5-liter car engine built by Ford in India. 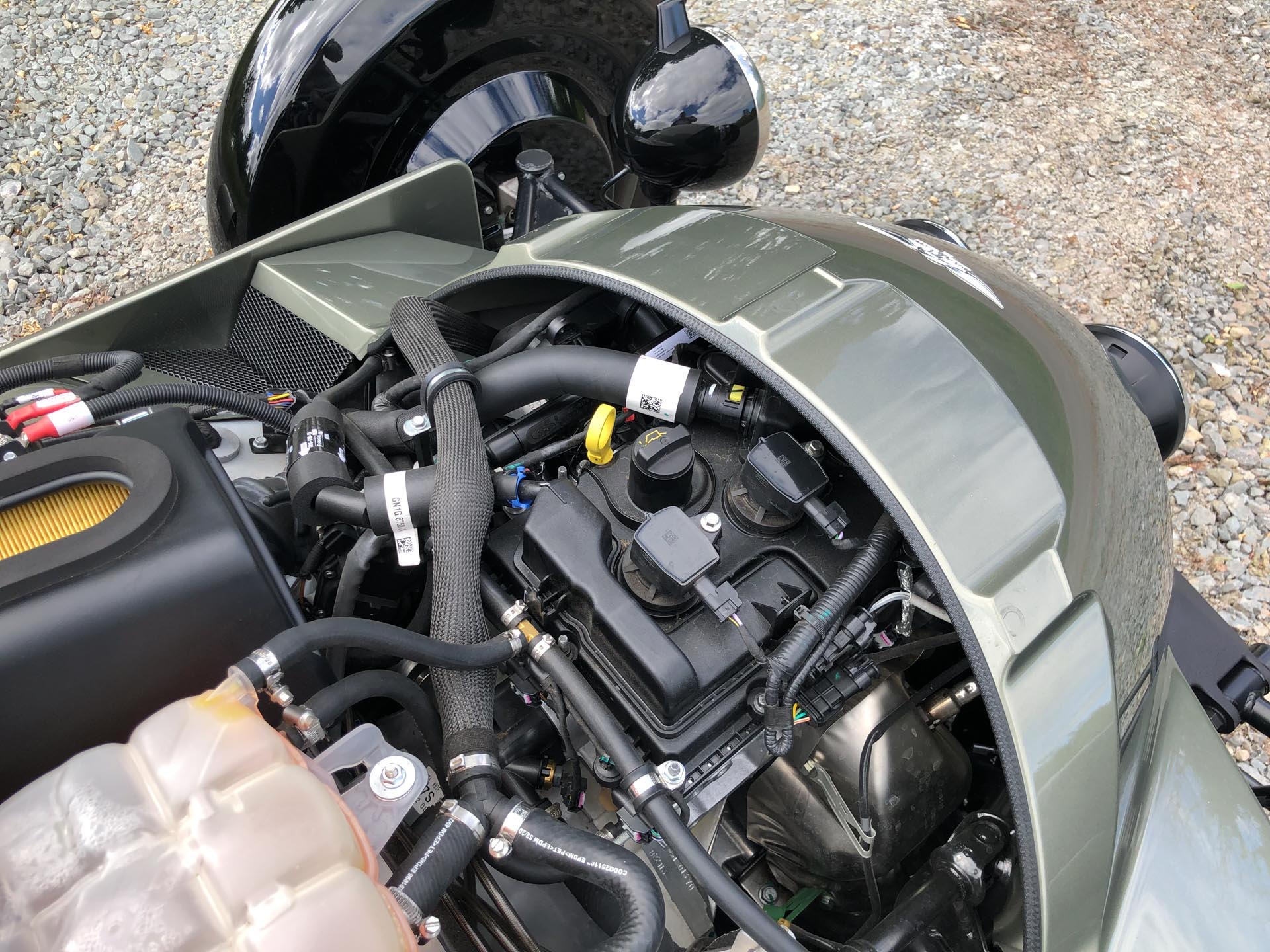 But don’t be too hasty to judge. First, the new motor is a triple, which means it still delivers some of the offbeat burble and vibrations that made the old bike one so much fun. Second, it’s naturally aspirated, so it has a crisp throttle response, ensuring it delivers the kind of man-machine connection a car like this deserves, and third, it makes 117 hp (118 PS), along with 110 lb-ft (150 Nm) of torque, which compares favorably with the circa 90 hp (91 PS) of the bike-engined car, and should help offset a weight gain of around 220 lbs (100 kg). 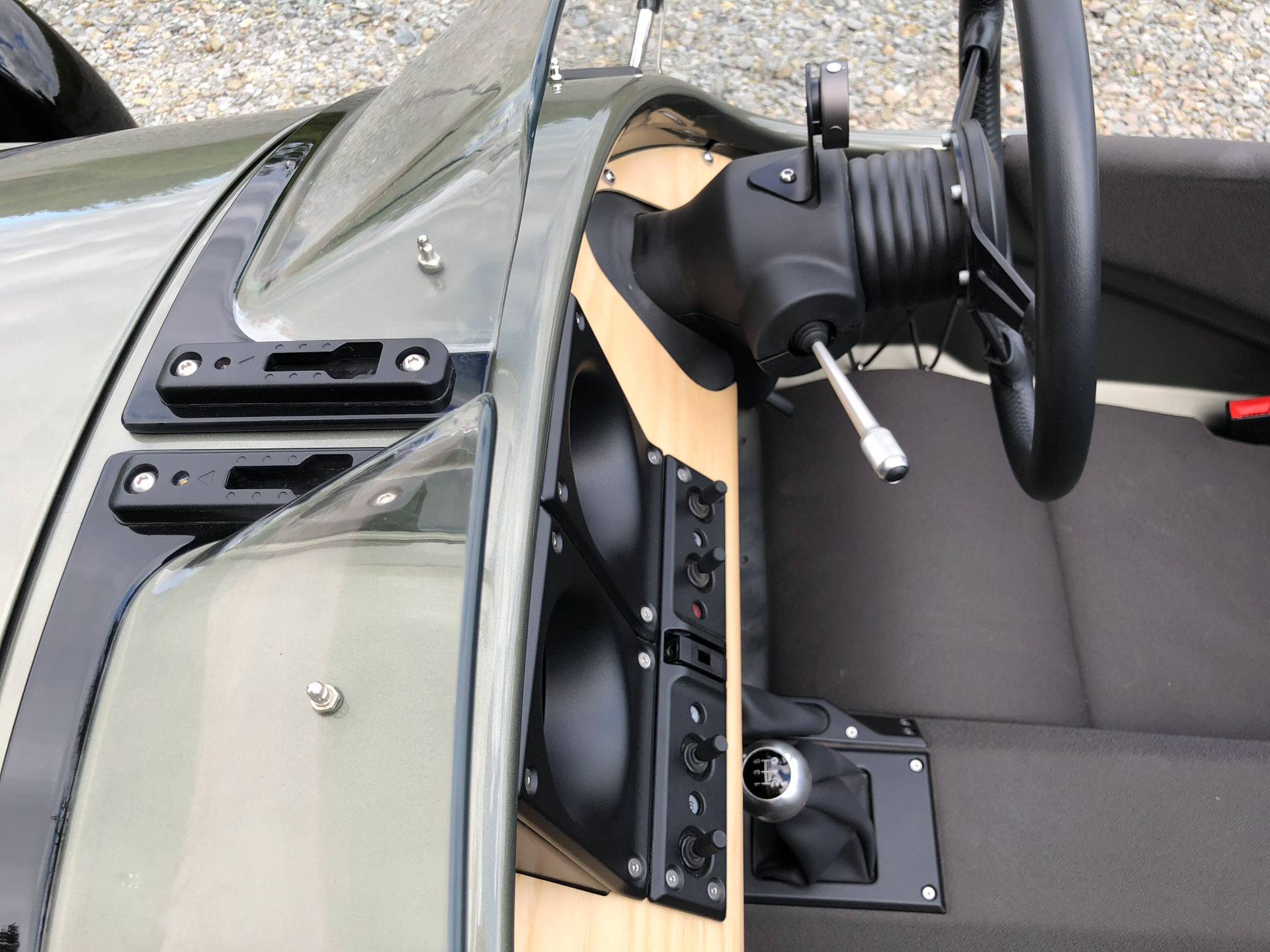 One welcome constant between old and new 3 Wheelers is the light and precise Mazda MX-5 five-speed transmission. So you snick first gear home, ease out the floor-hinged clutch pedal and let the craziness begin. And it really does feel crazy driving a 3 wheeler on roads populated by regular cars whose drivers are completely isolated from the world around them when you’re right in the mix with all the sounds, smells and kamikaze bugs nature has to offer. 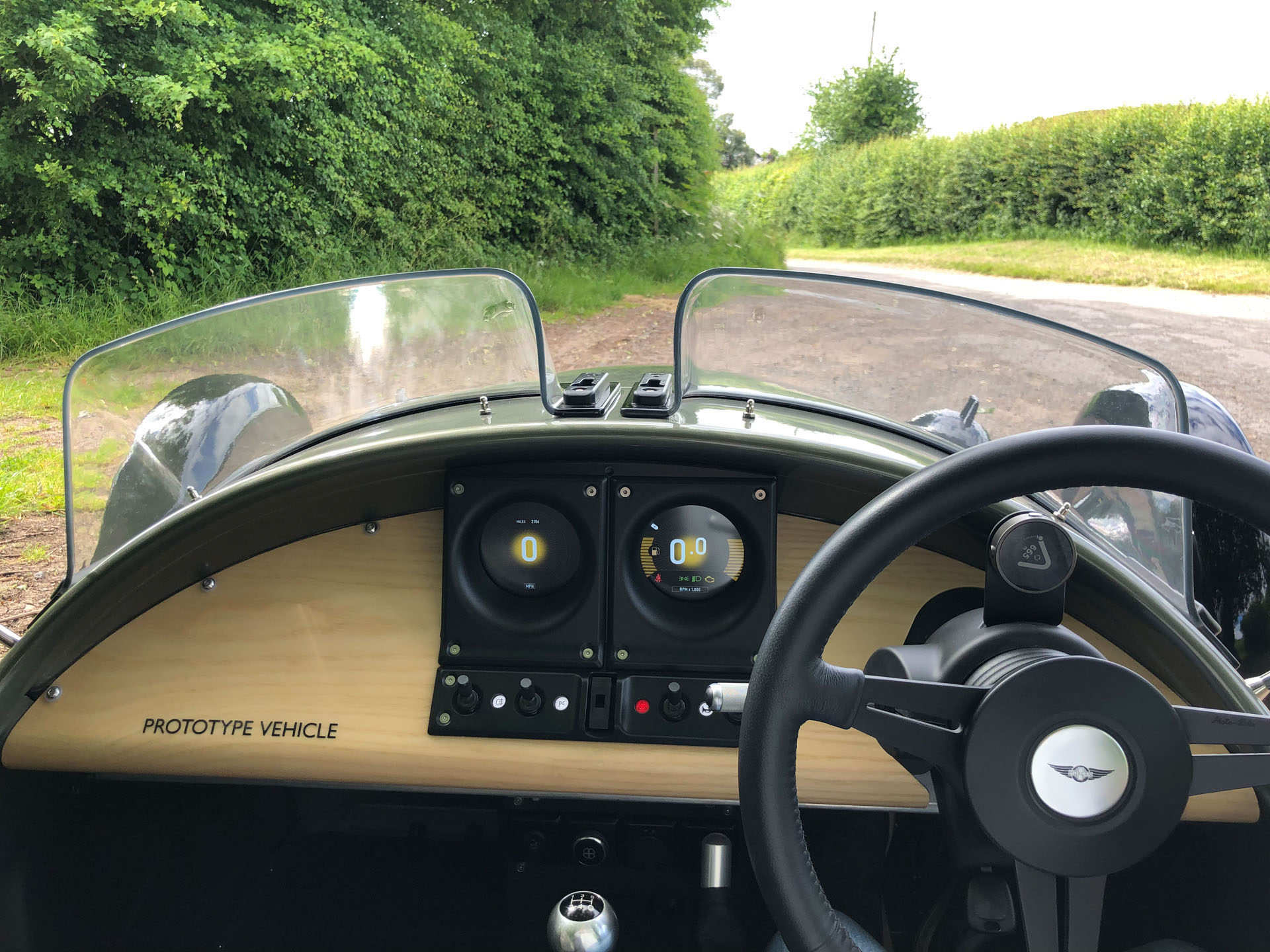 Within a couple of hundred yards you’ve already adapted to a couple of 3 wheeler quirks. One is that you have to drive with your outer arm (so right arm on this right-hand drive car) outside of the bodywork because there’s not enough space to turn the wheel if you keep your elbow inside. This is fine for carving country lanes, but things get a little awkward on tighter turns and junctions when neither arm placing works.

Another is that the small double windshield does a reasonable job of deflecting the air over you, meaning you can thankfully drive it without a helmet, but you’re best off looking over the screen rather than through it, because the view through is badly distorted . Sometimes placing the far front wheel on the inside of a corner was trickier than I wanted because I couldn’t see it clearly. 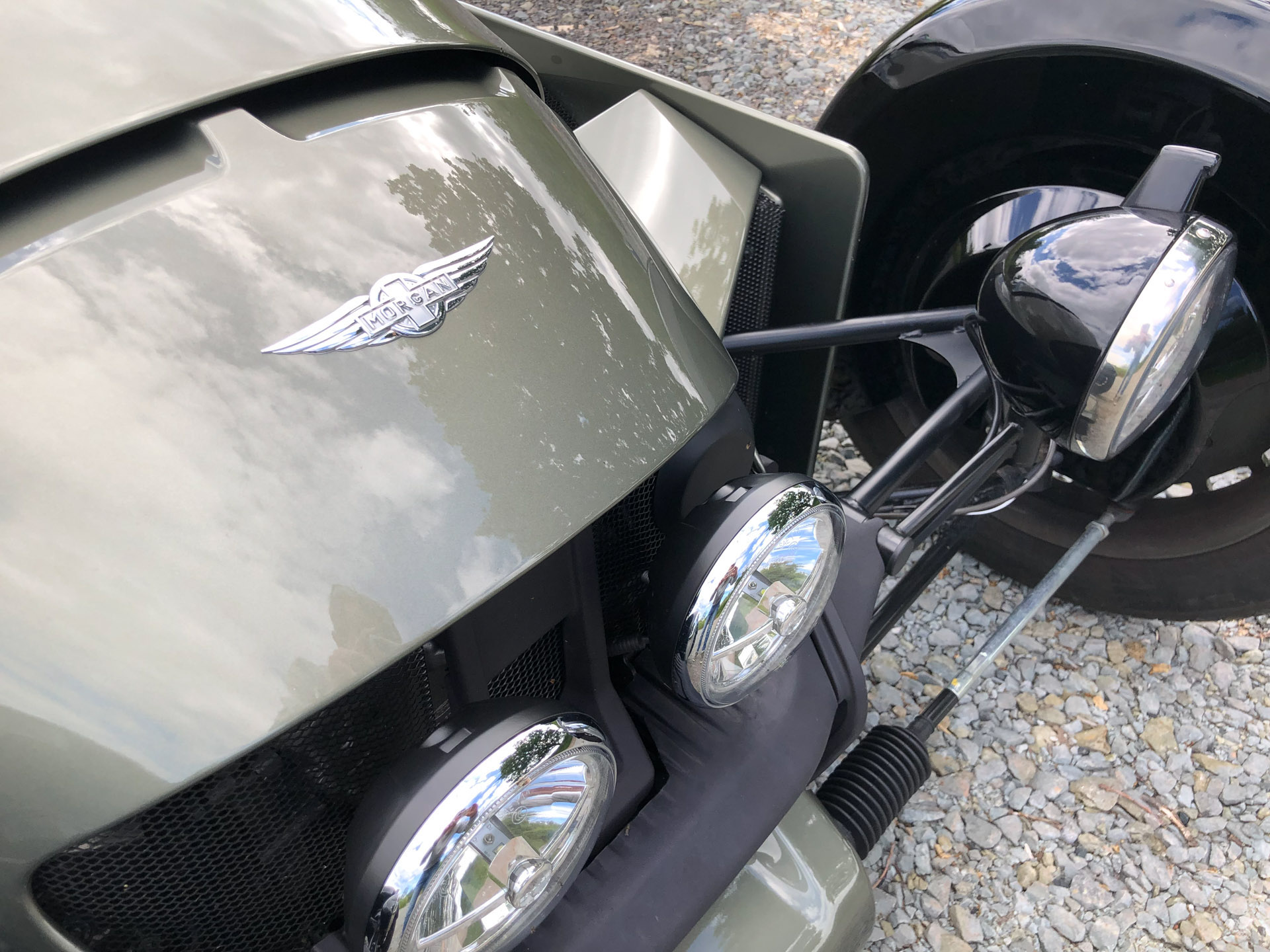 But these are minor niggles and easily outweighed by the massively more refined way the new 3 wheeler goes down the road. It still feels crude by modern standards, the front axle thumping nosily into ruts, but swapping the old (and very old-tech) sliding pillar suspension for double wishbones with pushrod-actuated springs and dampers, and widening the front contact patch with new squarer profile 130/90 R20 (no, that’s not a misprint) tires means the 3 wheeler feels far more sophisticated. There’s far less steering kickback than I remember from the old car, and there’s a heap more bite at the front end. 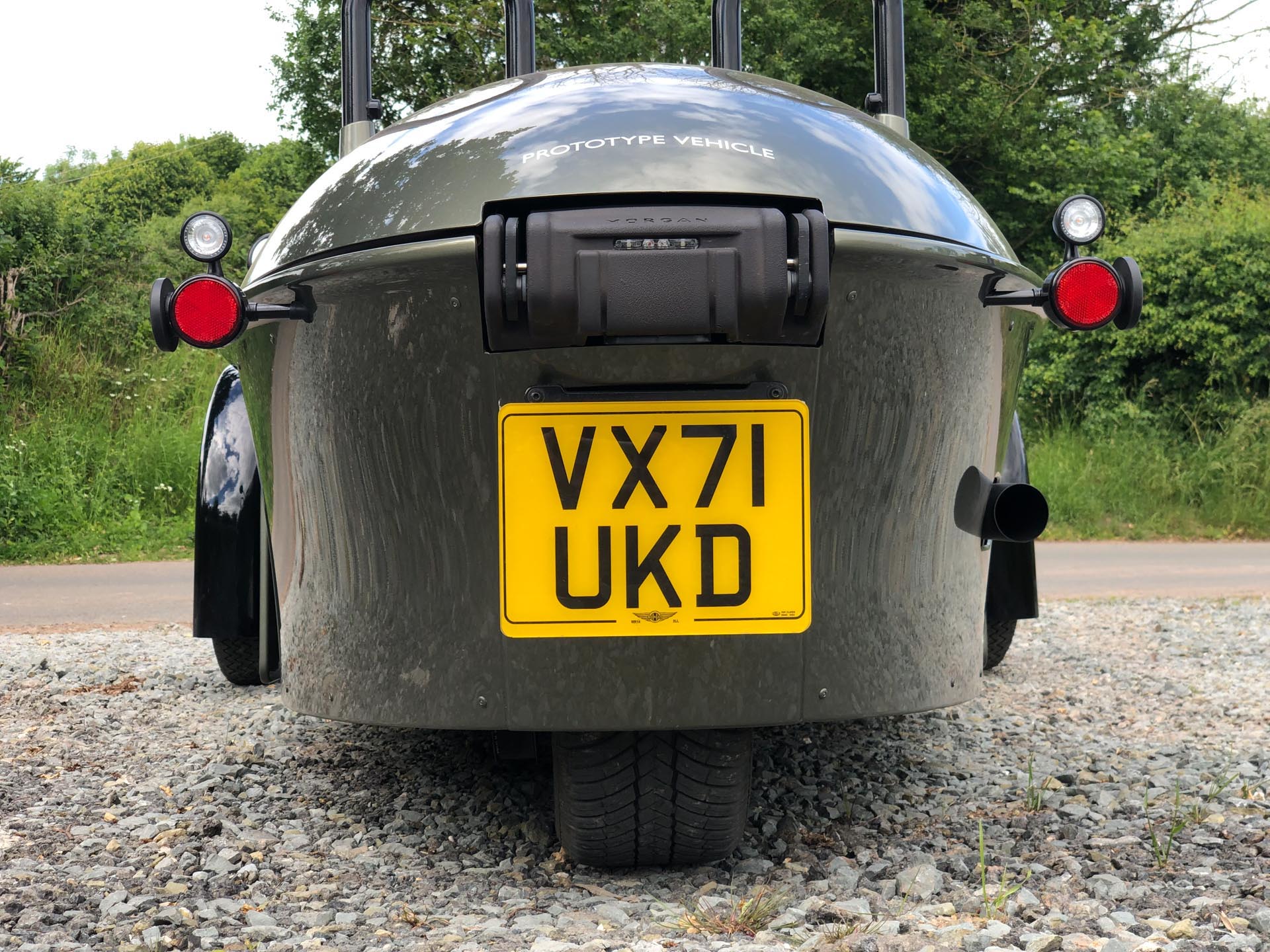 Related: Morgan Four-Wheelers Return To US In January 2023 After 15-Year Break

It feels fairly well tied down at the rear, too, though Morgan has deliberately chosen an all-season tire for the single driven wheel over a summer one to build in some throttle adjustability. Push moderately hard on a tight corner and the front clings on gamely before washing wide. Try the same again, but really climb on the gas and the rear will arc round gently leaving you plenty of time to tidy things up before barreling up the road in a blur.

Fast Is A Relative Term

Or at least that’s how it feels from the driver’s seat. But the only thing getting blurry is your vision. In reality you’re always going much slower than you think you are. Morgan suggests the 3 wheeler should be good for zero to 62 mph (100 km/h) in about 7 seconds, which is nothing special by performance car standards these days, and actually makes it about a second slower than the old car.

But it feels absolutely sufficient here, because with the exhaust bellowing behind your right ear, the wind whipping through your hair, your arm throwing gears at the engine via that delicious Mazda manual shifter, and the road rushing past you just inches away from your elbow , that 7-second run is way more exciting than a 3-second blast to the same speed in an enclosed supercar. 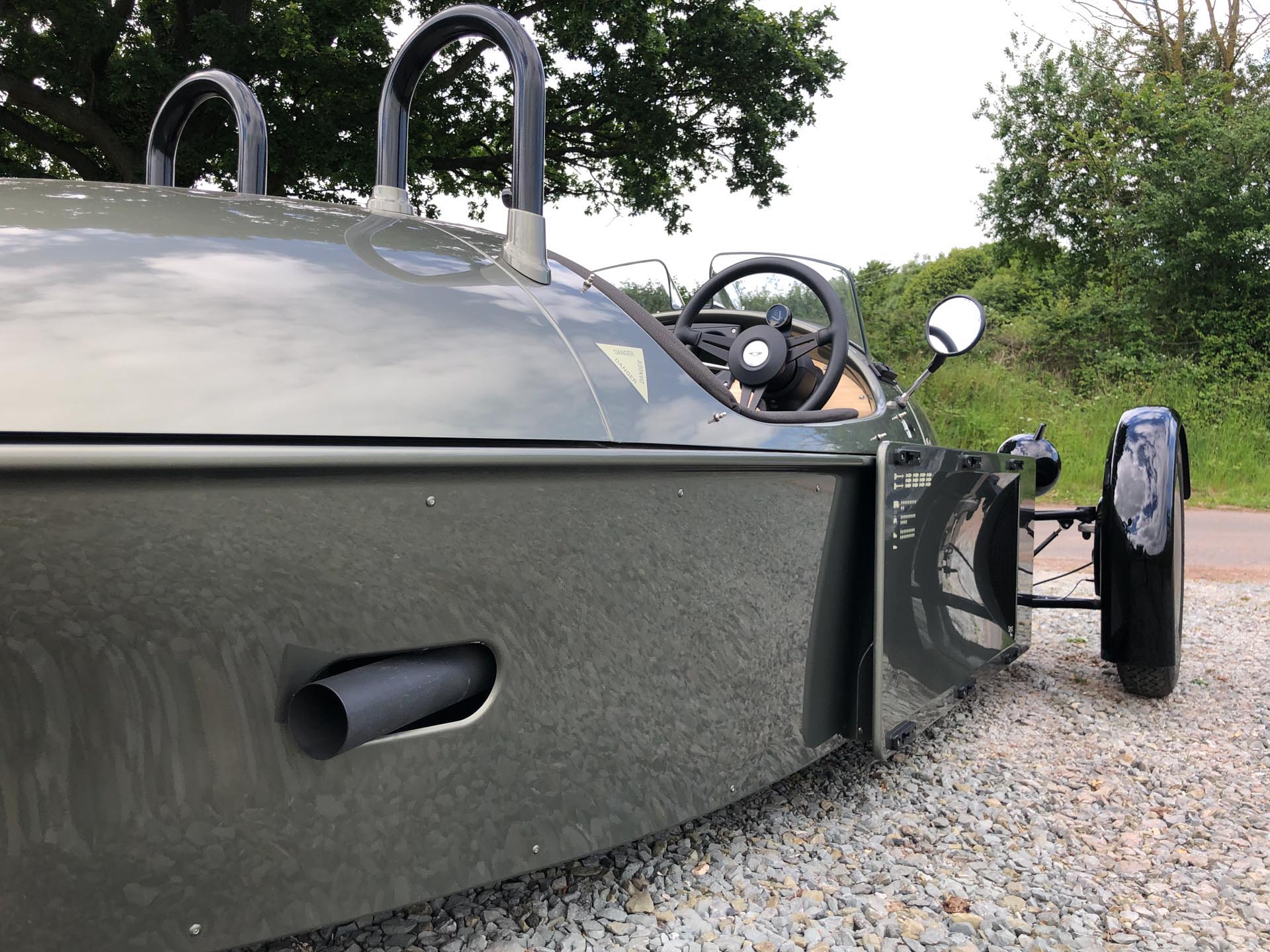 That exhaust, it’s worth pointing out, what an optional sports exhaust, and fairly loud. I’d option it anyway, because it was never overbearing and added to the fun, but you’d probably want to consider it an essential option if you’re in a left-hand drive market because the exhaust exits on the right side of the car If nothing else it helps drown out the ever-present gear whine from the rear drive unit.

That won’t be a problem when Morgan finally makes good on the promise made by its EV3 electric concept first seen in 2016, but sadly killed off during development work a couple of years later. The company says the new car’s chassis has been configured to accept an electric powertrain, but we’re unlikely to see anything in the next couple of years.

Morgan also claims a top speed in the region of 130 mph (209 km/h) for this new 3 wheeler, though we can’t imagine many people bothering to verify that claim. Even 80 mph feels like 130 mph, and is the sort of speed you venture to only briefly now and again for a quick hit of adrenaline. The rest of the time you’re plenty happy to cruise along at 50-60 mph, which sounds absurdly slow, but actually makes the 3 Wheeler one of the most relevant sports cars you can buy. You’ll never get a ticket for speeding, you’ll never get frustrated being stuck behind other traffic, and you’ll never, ever get bored. 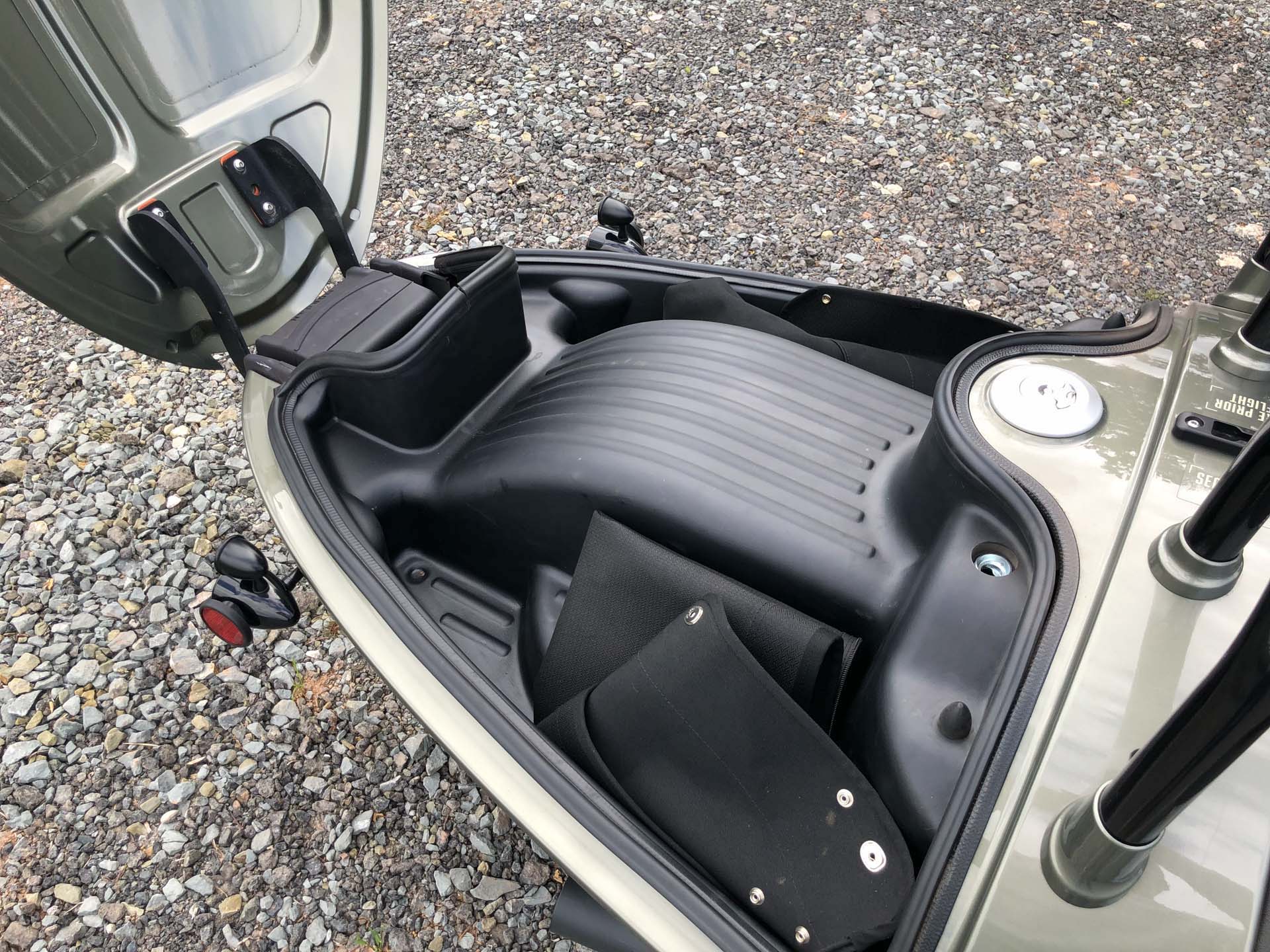 You might get pissed off, though. Morgan was surprised to find that many buyers of the first-generation 3 Wheeler took their cars on some epic, long distance adventures, and some of the upgrades on this latest one in terms of cabin pace and refinement, will help make those trips easier. The new car has heated seats, a phone charging socket, side pods that can be fitted with bungees or panniers for carrying luggage, and a flip-up rear deck that reveals a trunk area of ​​sorts. But for most people the 3 Wheeler is far too compromised and too raw to be used for anything other than brief blasts on a sunny weekend.

And there’s nothing wrong with that. Plenty of people use their supercars in the same way, but they’d probably have more fun in the Morgan, and generate even more attention for a heap less money. The 3 Wheeler costs £41,995 in the UK and $54,000 plus destination in the US, which doesn’t buy you much of a supercar. And yes, you could buy a Mazda MX-5 with similar performance for almost half the money, but great as the Mazda is, it’s not a hand-built jewel of a car that could hold its own in a parking lot full of exotics. 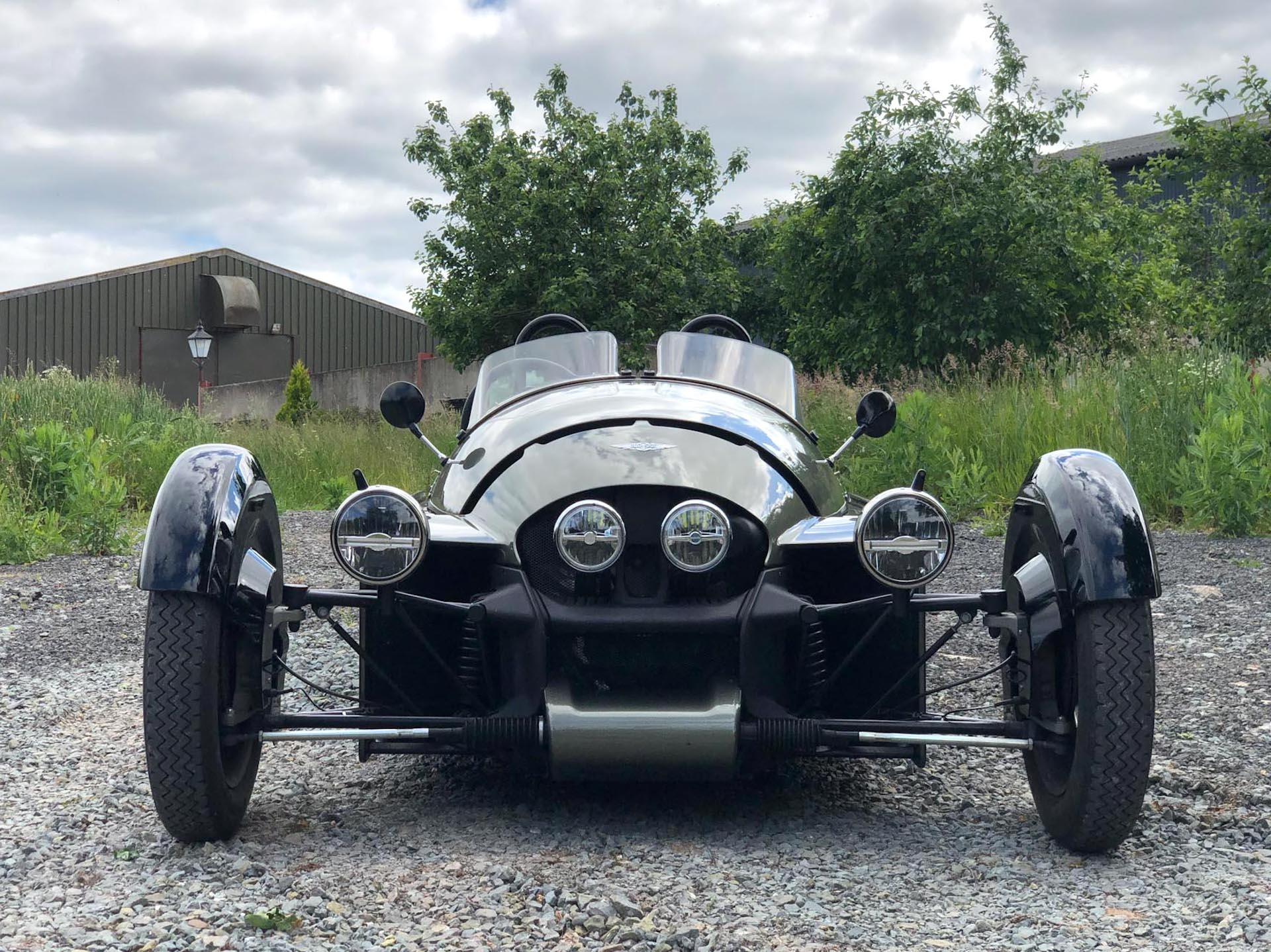 You could look at the 2023 Morgan 3 Wheeler and dismiss it as a silly toy, and cool as it looks, I’m sure many people will do that. It’s got no roof, no windows, not much of a windshield, it’s noisy, unrefined and would be hell on a multi-hour freeway drive. But while most marques peddling sports cars and supercars are still bleating on about lap times, absurd horsepower figures and acceleration numbers that are entirely out of step with the reality of how cars can be driven and enjoyed in the real world, it’s refreshing to come across something so rooted in history, and so offbeat, yet which is simultaneously so in-step with the times.