The Toyota Aygo X is city car with altitude. No, that’s not a typo. The X, which is pronounced “Cross”, takes the familiar Aygo city car recipe and gives it a crossover twist, adding chunky body cladding and extra ground clearance. But is there any substance to that crossover revamp, or is the new name and ride height merely distracting us from the car’s faults? We grabbed the keys to find out.

The previous two generations of Aygo shared a body, interior and running gear with the Citroen C1 and Peugeot 107 (and later 108) and have been particularly popular with young drivers in Europe. But it’s becoming harder to make the business case for low-cost cars now that thats and regulators expect them to contain so much comfort and safety equipment that eats into the profit margin, so the French buyer firms ducked out this time, leaving Toyota to go it alone.

But while the Aygo X might be small in stature and price (it starts at £14,805 in the UK, versus £21,080 for a basic Yaris), it’s big on presence. Toyota previewed the X’s styling with 2021’s Aygo X Prologue concept, and it’s great to see that most of what we saw there made it to the road. The contrasting black rear quarter panels, black plastic wheelarch spats and huge black plastic bumper/grille sections make the Aygo X stand out in city traffic. 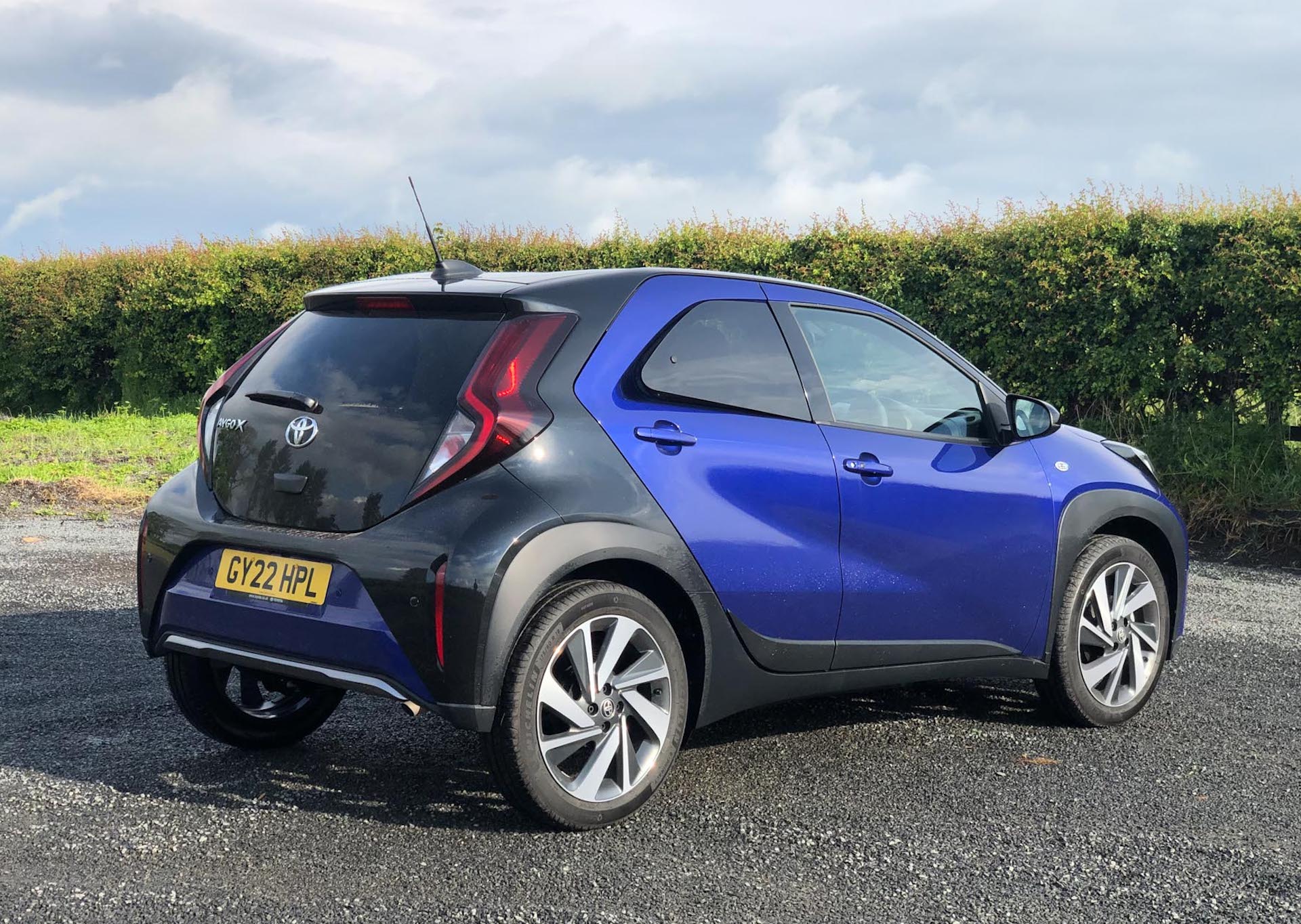 That’s all they do though. The X has no real go-anywhere credibility. Beneath the crossover dressing it’s an ordinary front-wheel drive micro-hatch whose fractionally taller (by just 0.4-in/11 mm) ride height gives you a little extra visibility from the driver’s seat. 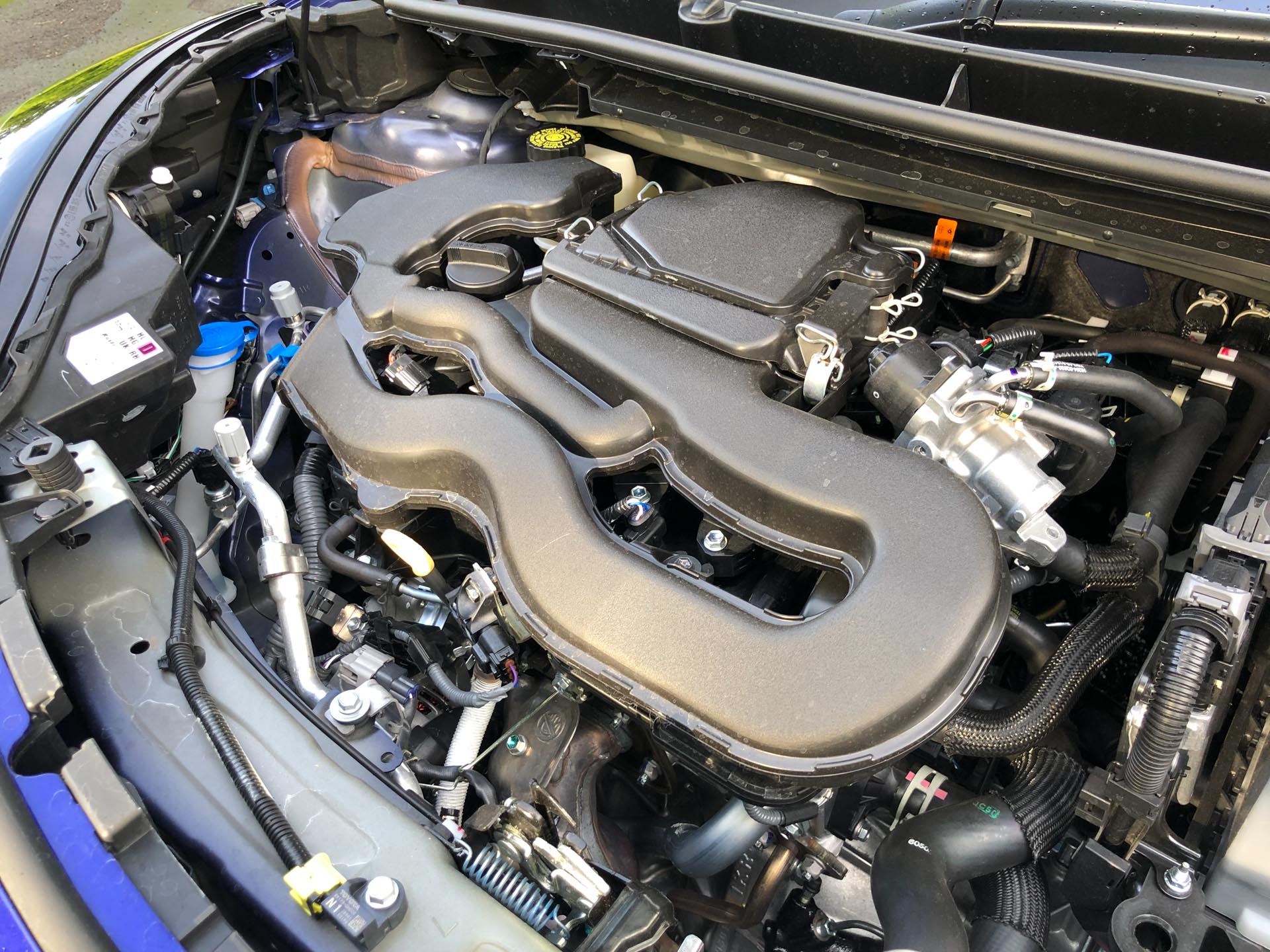 There’s no all-wheel drive option available to Aygo X buyers and the only engine is a 1.0-liter naturally aspirated triple from the old Aygo with no hybrid assistance whatsoever, and which makes a tiny 71 hp (72 PS) and 69 lb-ft (93 Nm) of torque.You probably don’t need me to spell out that the X gets an F for acceleration.

Long intermediate gears killed much of the potential zip in the five-speed manual car we drove, meaning zero to 62 mph (100 km/h) takes 15.6 seconds, though the CVT alternative, which theoretically should always have the right ratio, still needs 15.5 seconds. If you need to get places in a hurry, this isn’t the car for you, but the little triple does at least sound fairly characterful, even if it isn’t the quietest engine around, and the clutch and gearchange are light. 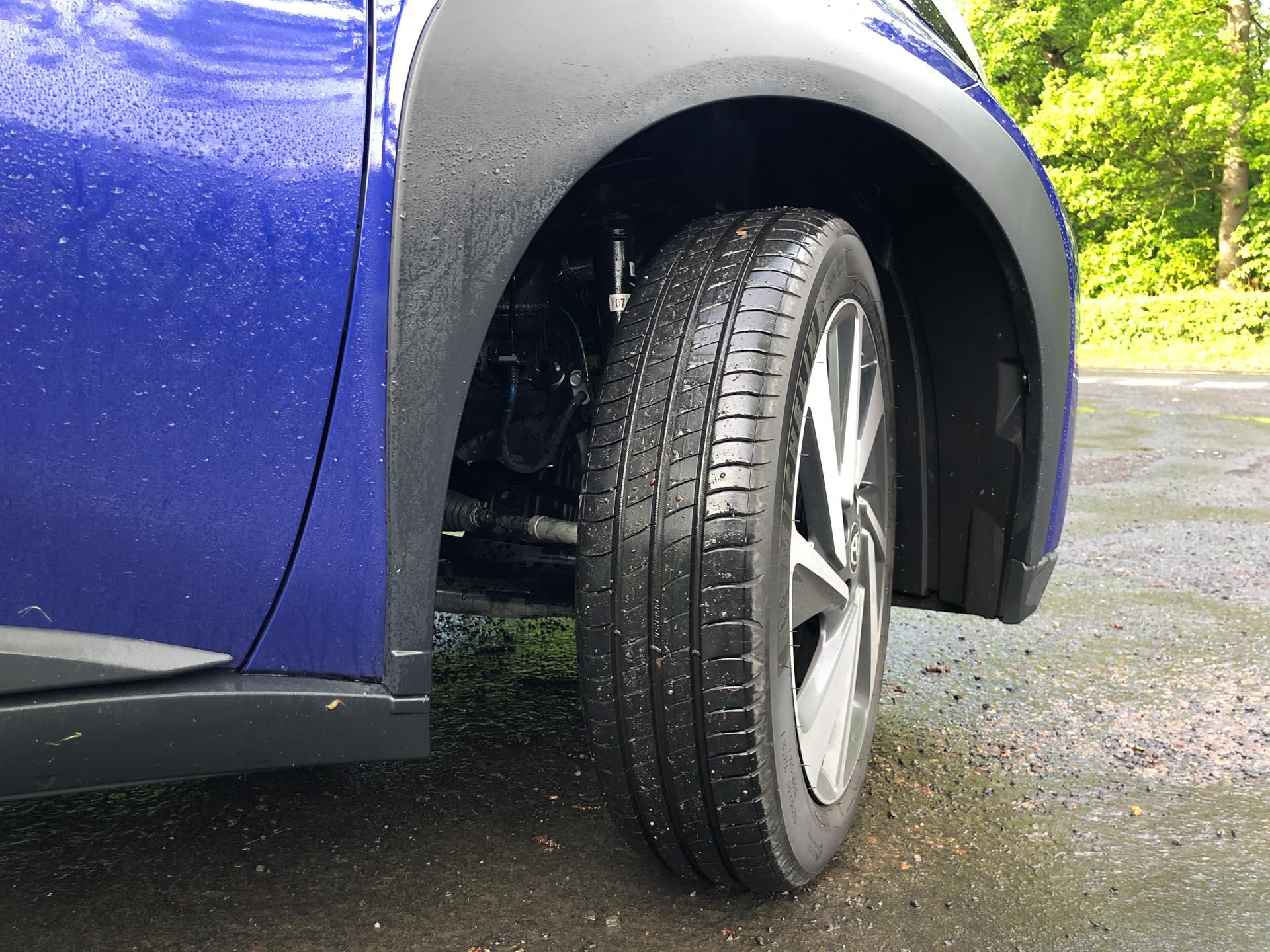 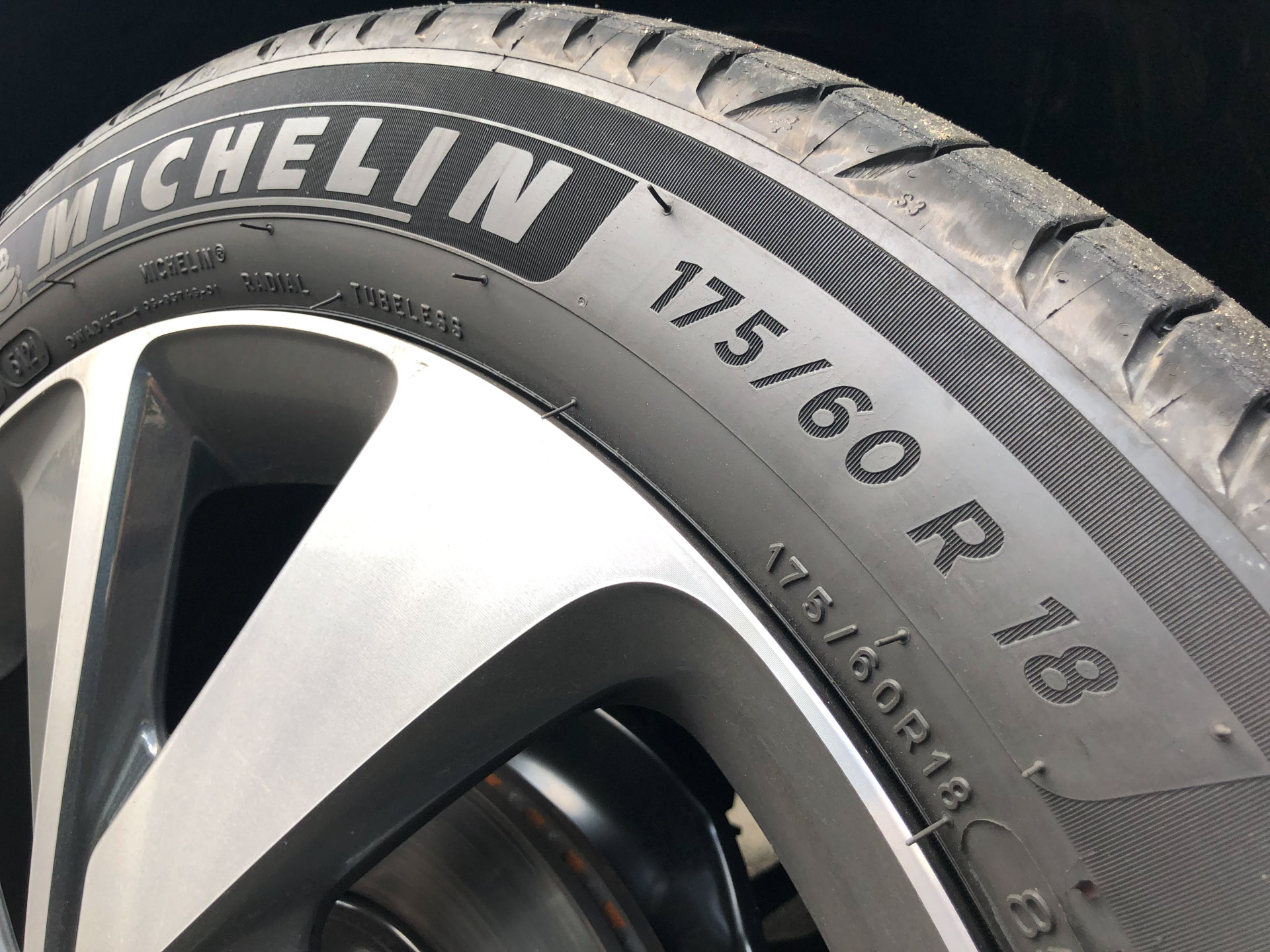 The steering is also light, and is about as chatty as your average coma patient, but does at least point the car neatly and accurately. The Aygo X turns into corners smartly and grips way better than you’d expect given the hilariously skinny 175-section rubber our posh Exclusive model’s 18-inch wheels were wearing. Body roll is fairly well controlled, the ride is surprisingly good given the tiny wheelbase, and the short turning circle makes it ideal for city driving.

Please don’t make me go in the back again 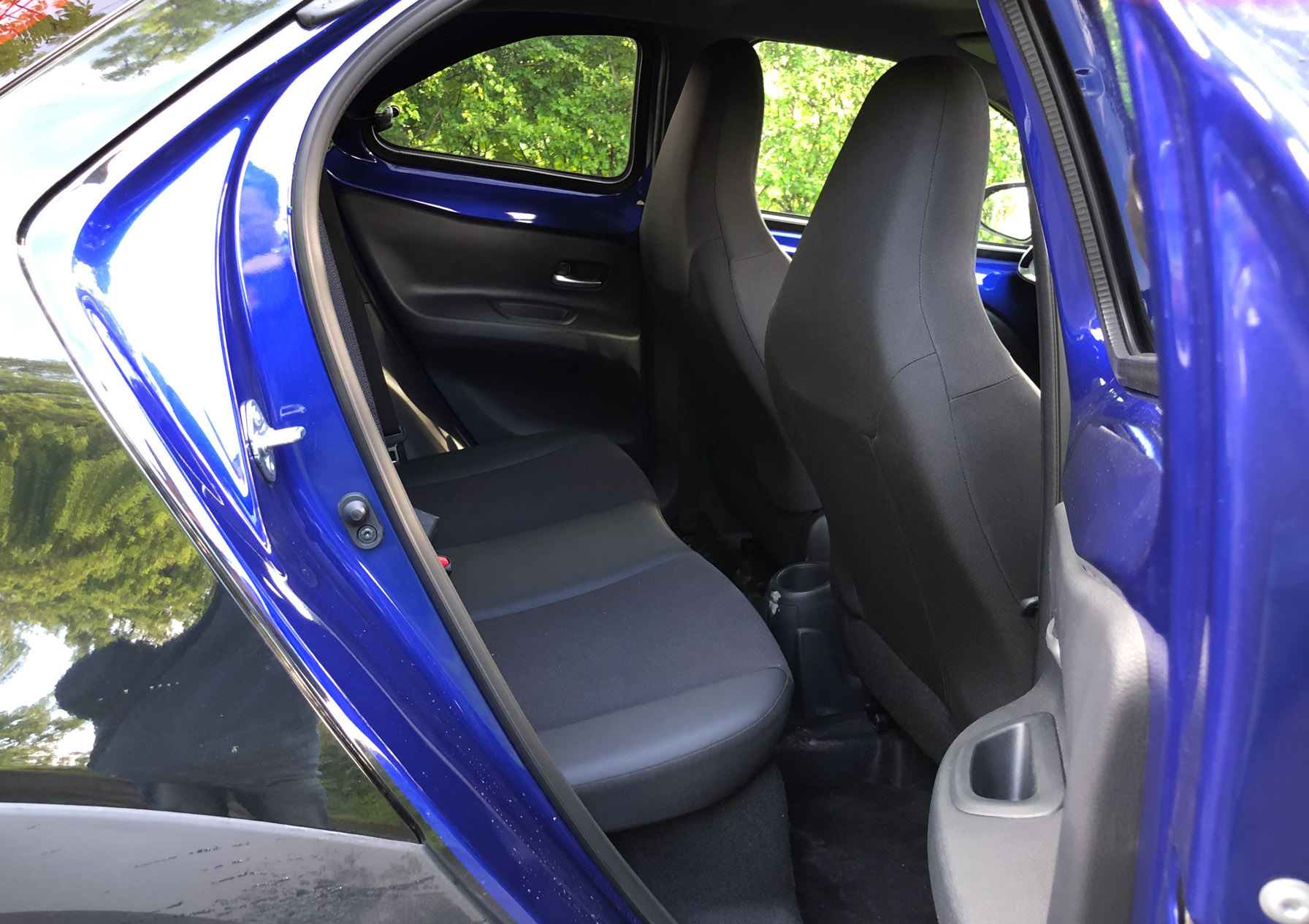 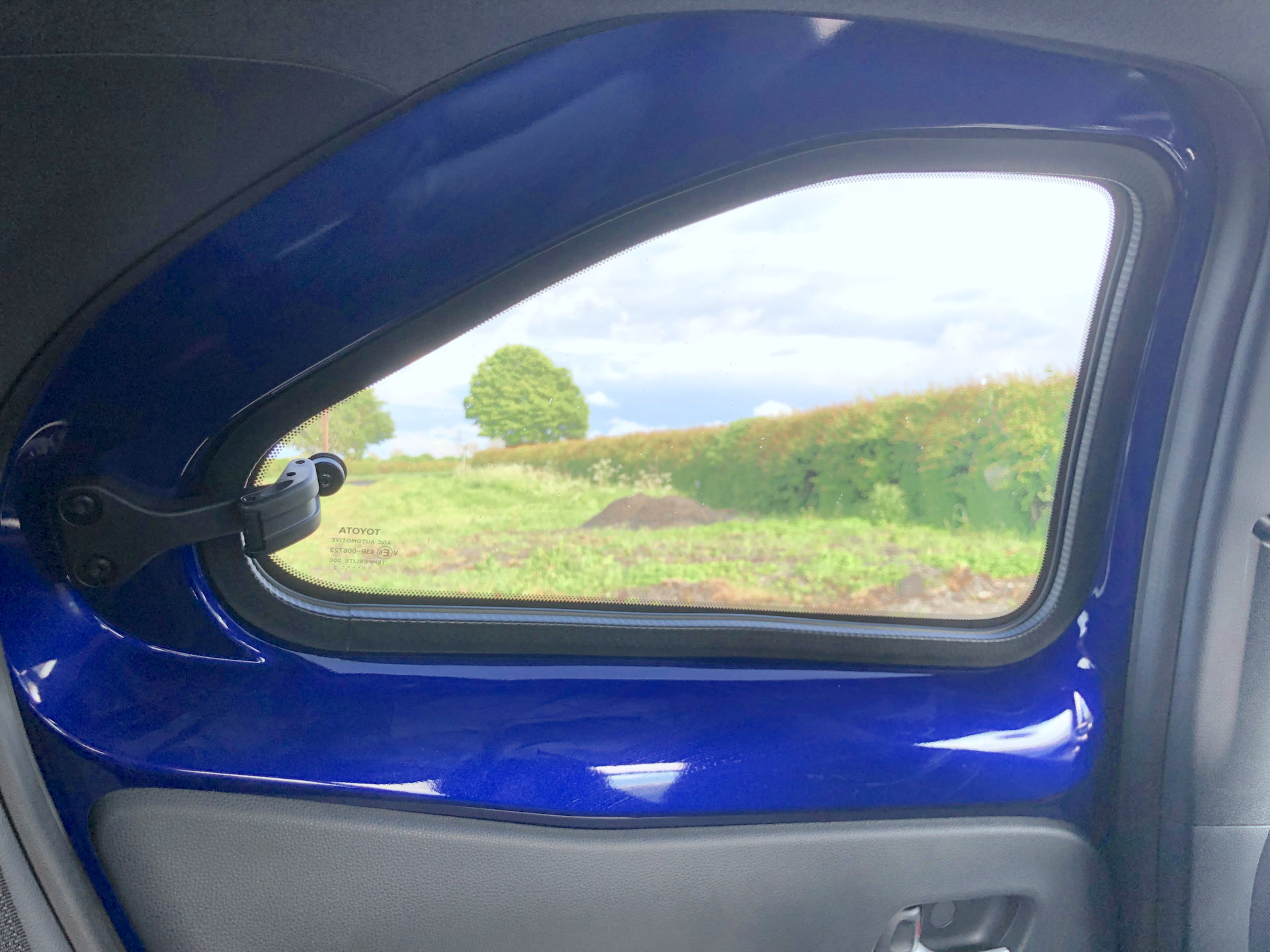 Less great for city driving is the poor over-shoulder visibility. Blame the fat C-pillars and massively thick door frame; rear passengers certainly will because they make it feel pretty claustrophobic back there, something made worse by the rear windows only hinging outwards rather than rolling down. It’s best to think of the Aygo X as a two-seater with a couple of spare seats in the back. Adults up to 5 ft 9 in (1.75 m) or so will fit, but anyone taller is going to struggle for head and legroom (particularly with the optional canvas roof), and the rear door aperture is so narrow, even getting your legs in and out is awkward.

Pack light and prepare to get lifting 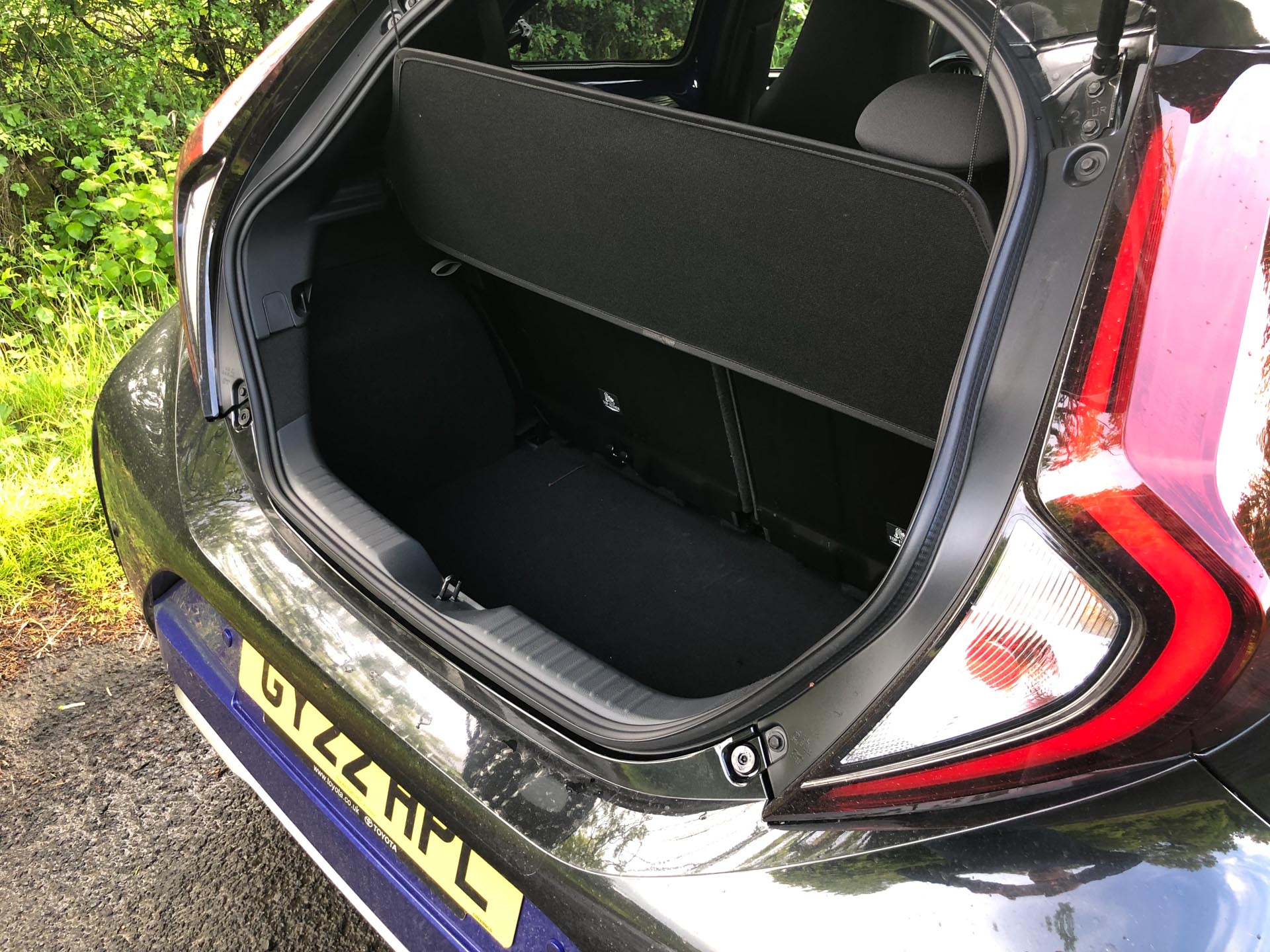 The luggage bay is also pretty stingy. You get 8.2 cu-ft (231 liters) of space which is enough to take a couple of slim rolling cases, or squashy bags, but rivals like the Hyundai i10 offer more, and the high load sill means you’ll be heaving the things up to chest height like you’re doing some kind of kettlebell workout before you can drop them into the bay. The rear seats do at least fold, so while the X’s rear bench isn’t that roomy for passengers, it can at least lend a hand when you’ve got mountains of shopping bags.

Big car feel in the front 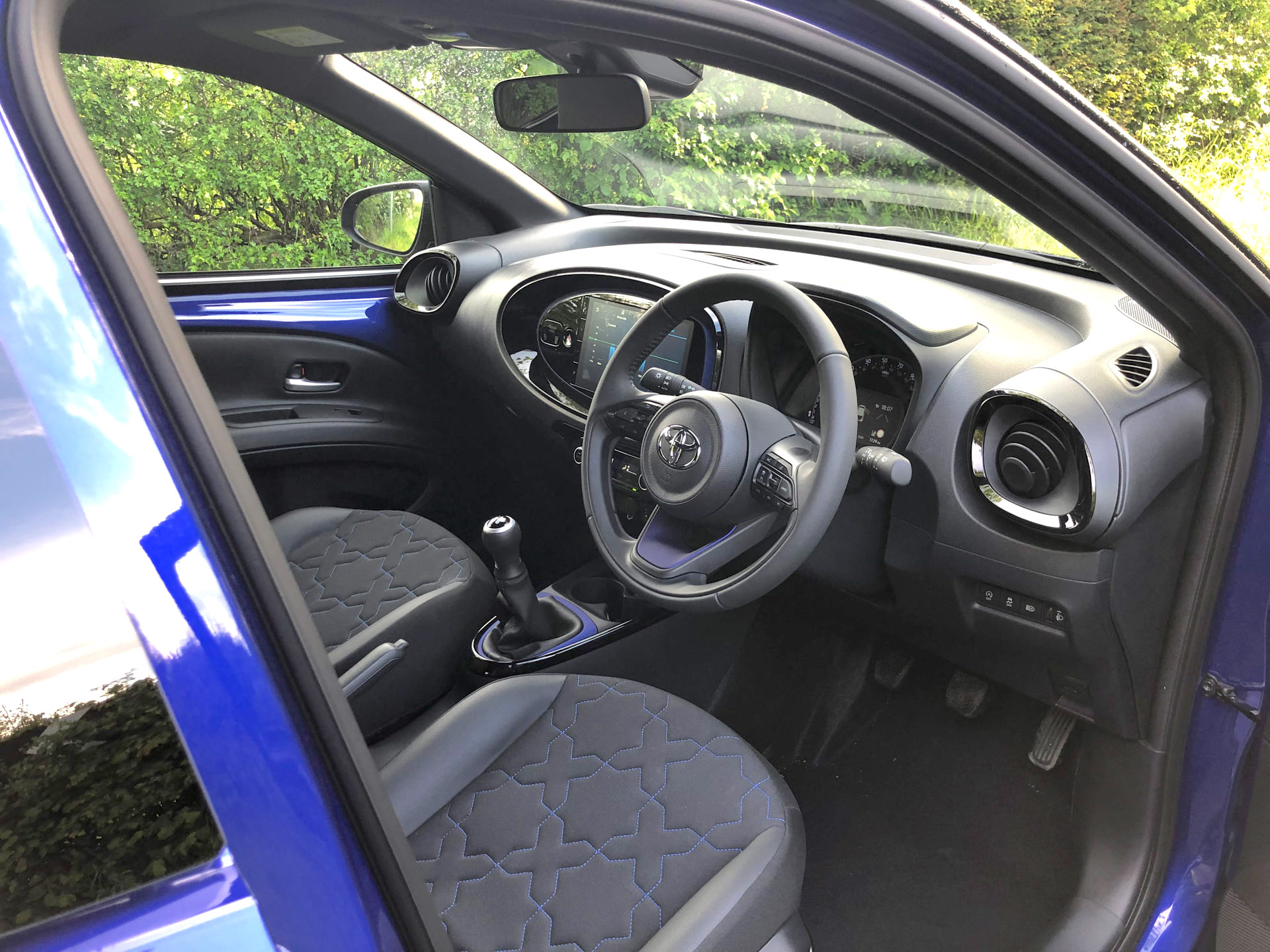 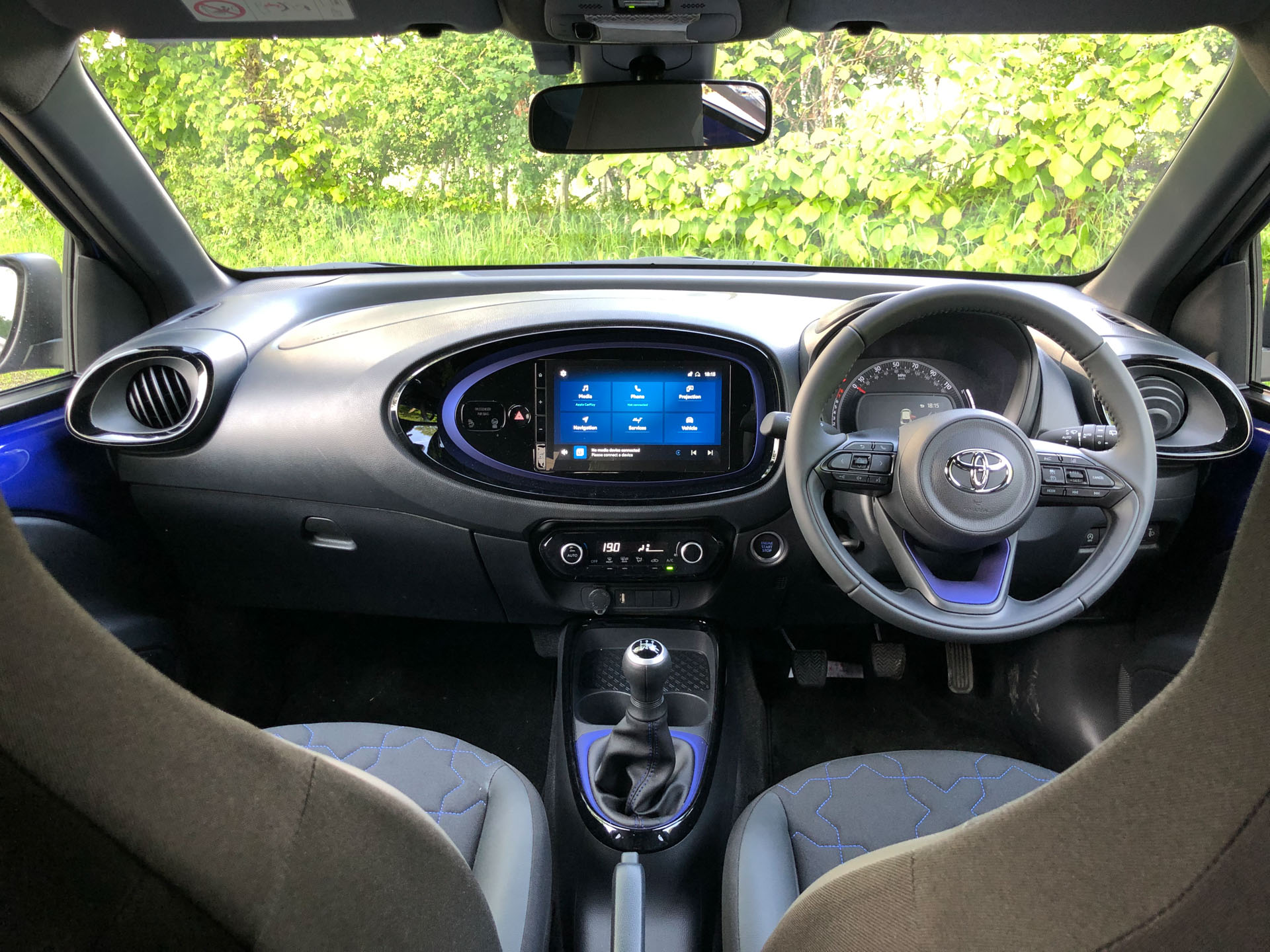 Related: Toyota Boss Says A Hot Aygo X Gazoo Racing Is Possible But Not In The Cards

Up front though, it’s a different story. The cabin feels light and airy, and although the dashboard and door plastics make a marble kitchen worktop feel soft to the touch, there are enough tactile surfaces, like the chunky leather-wrapped steering wheel and gear shifter, and visual treats, including the half -moon speedometer with its add-on digital display, to avoid it feeling depressingly basic.

Toyota makes a big play about the higher driving position making it easier for drivers to spot road hazards, and it’s true, you do feel like you’re sitting high up when you look out through the door window. But there’s a weird mismatch here. The scuttle and dashboard are much higher than the tops of the door panel, so when you’re looking forward you never get that same sense of elevation. 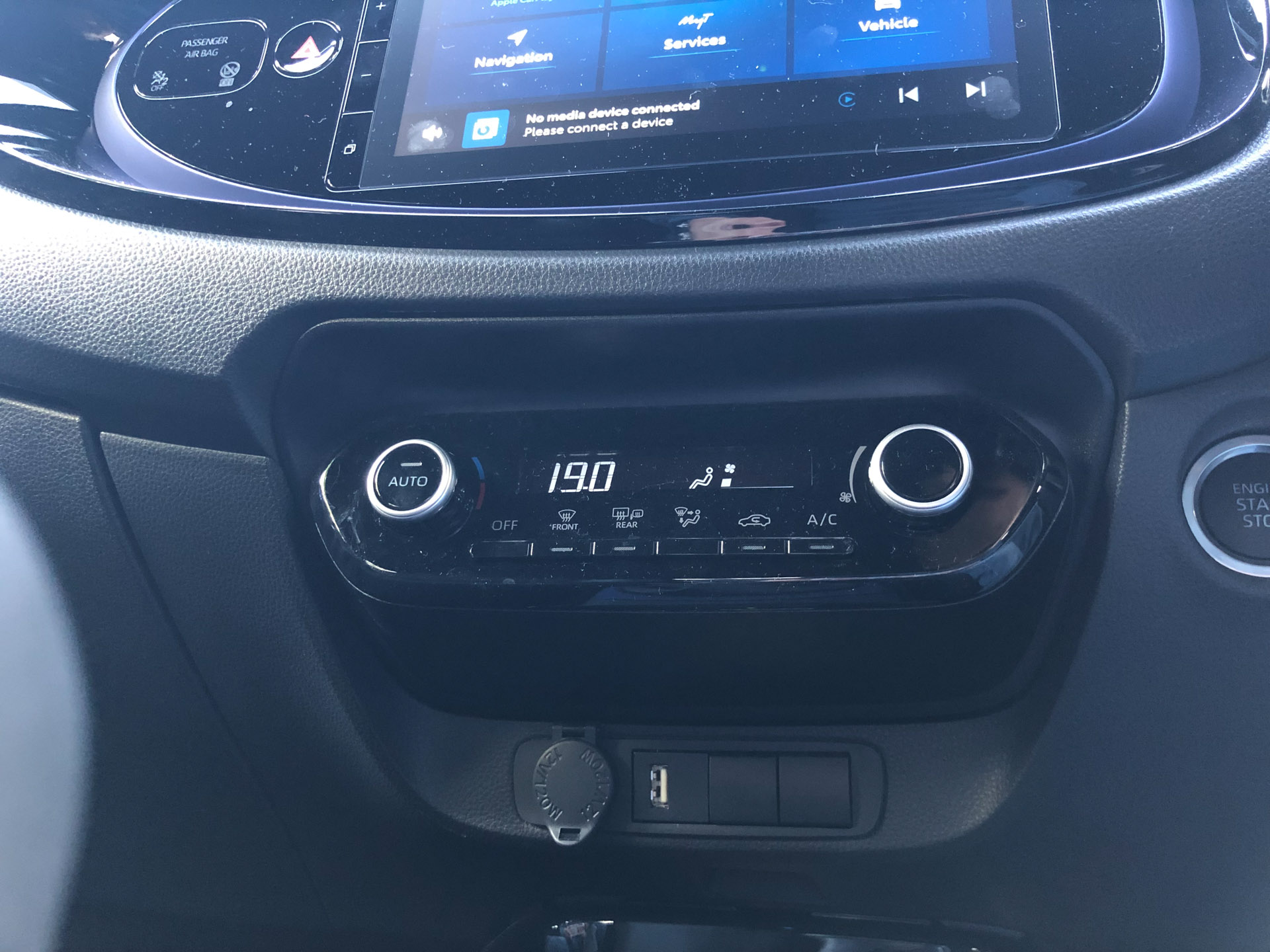 Other niggles include the position of the auxiliary power sockets, which are tucked below and partially hidden by the climate control panel, which itself is mounted a little too low. At least you still get user-friendly rotary controls for temperature and fan speed.

But to be honest, the basic Pure is probably where the sweet spot is, because even that entry level car comes with 17-inch alloy wheels, reversing camera, adaptive cruise control, manual air conditioning, auto lights, a 7-inch infotainment system with DAB radio, Apple CarPlay and Android Auto integration. The Aygo’s strength has always been its no-frills simplicity, and the pure best fits that bill, though it’s worth noting that rivals like the Fiat Panda and Suzuki Ignis undercut it on price by as much as £1,000. 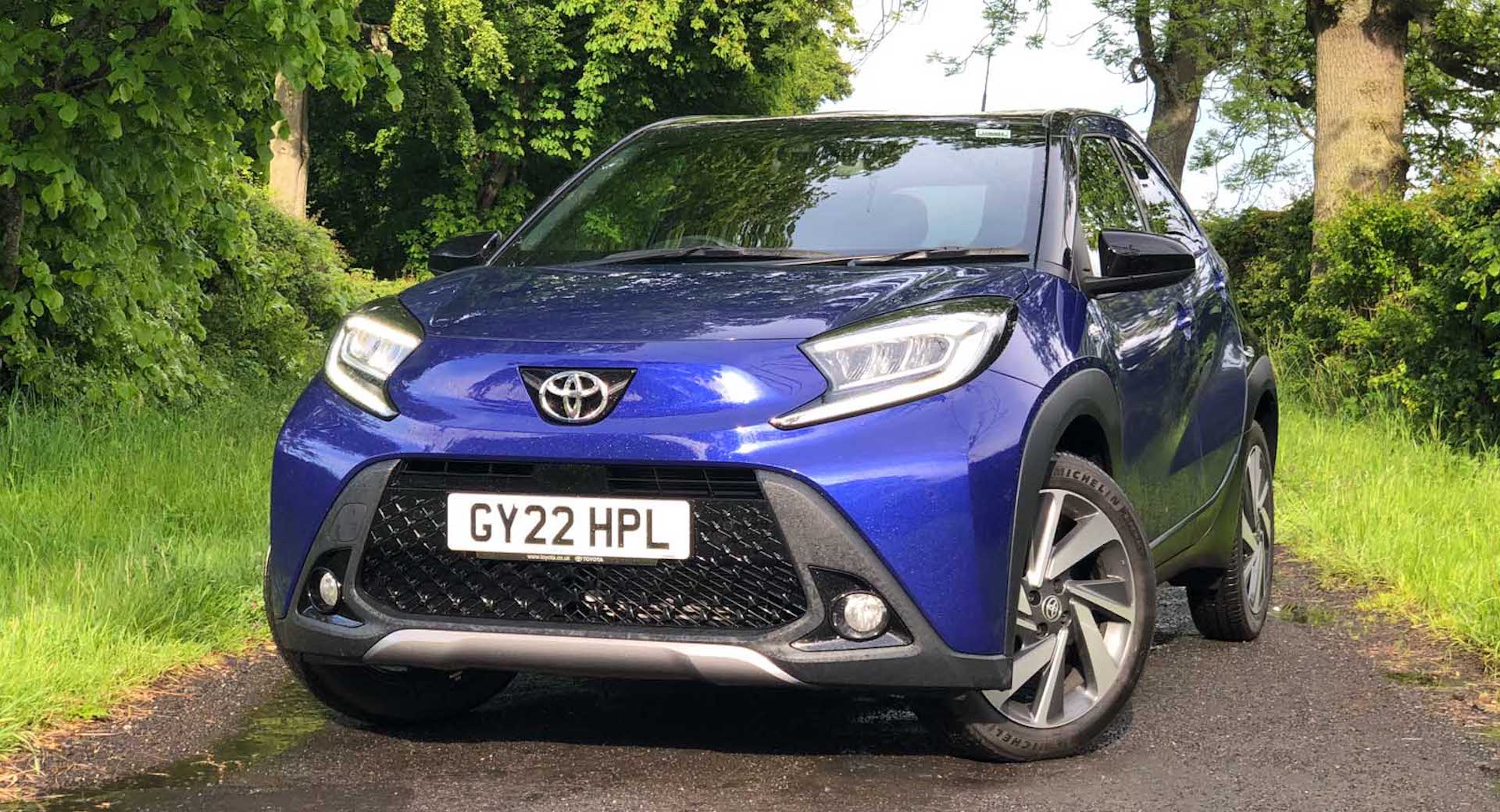 The new car’s faux crossover schtick maybe doesn’t tally with that simplicity, but it doesn’t really matter. What does is that when your scrape away the off-road posturing, the Aygo X is a great city car. The crossover theme simply gives it a bit more style than your average urban runabout, meaning more people might take the time to find out how good it is, and many might consider the visual X factor ample justification for the premium it commands over its rivals.