Huge roars were heard in Bristol city center today as a group of naked cyclists bowled right past a pair of opposition protest groups and defused a bizarrely polarizing civil rights exhibition.

They set off from the Full Moon pub near Cabot Circus, at around 12.30pm, but their planned route took them right past Green College, which just happened to be the scene of an angry standoff between two opposing sets of demonstrators.

Around 60 individuals from women’s rights group Standing for Women were holding a protest when around 100 members of trans rights organization Bristol Against Hate staged a counter-rally, according to BristolLive.

Although there were no incidents of violence on College Green, the initially peaceful atmosphere steadily grew more tense as the Bristol Against Hate contingent of harboring ‘transphobic’ views.

But the tension sensationally dissipated when hordes of bikers wearing little other than their birthday suits came breezing past, drawing roars of approval and delight from the partisan crowds. 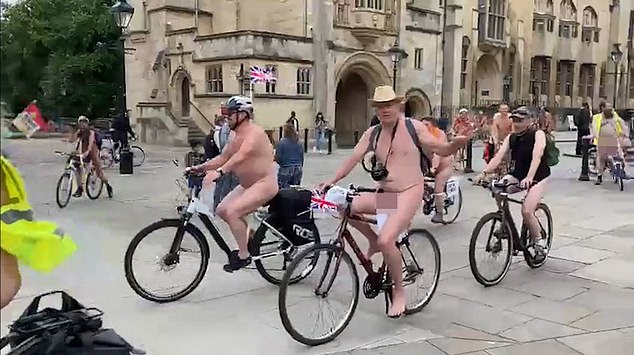 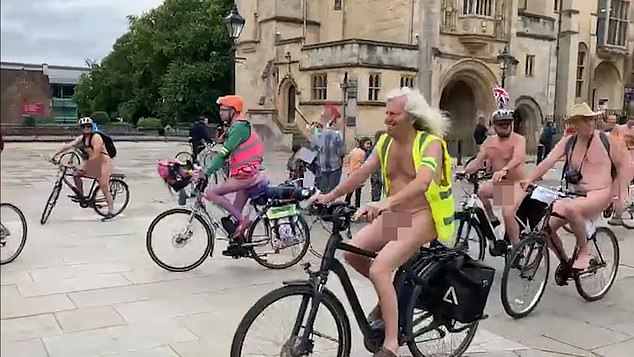 The World Naked Bike Ride set off from the Full Moon pub, near Cabot Circus, at 12.30pm to protest for a better environment, safer cycling and body freedom 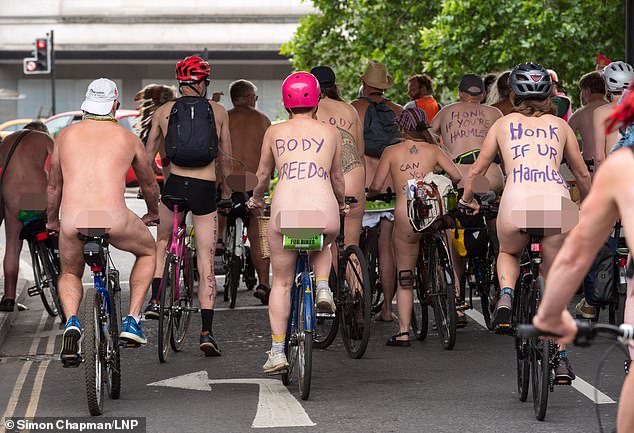 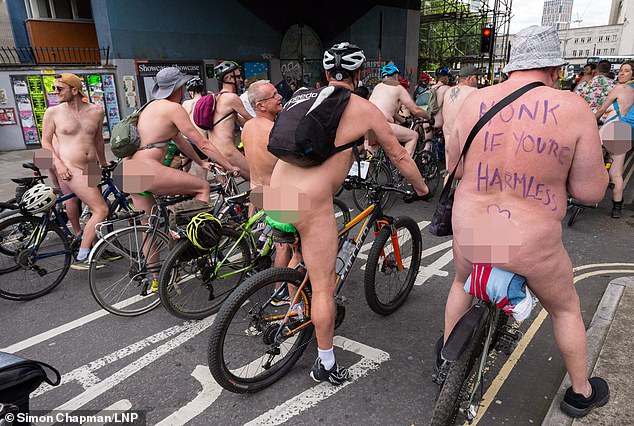 The event describes itself as a celebration of bikes and bodies, highlighting the vulnerability of cyclists on our crowded roads, a peaceful, powerful demonstration against car culture and oil-dependence 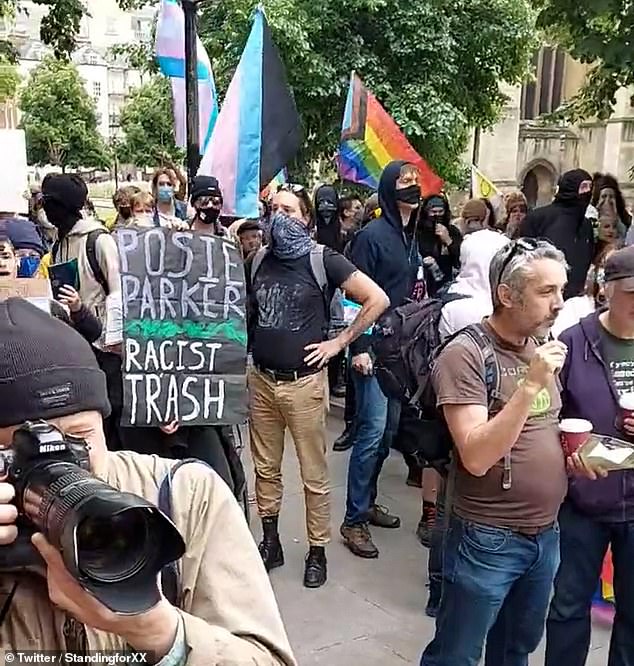 Using a megaphone, a man clad in black with his face covered is seen shouting at feminists in Bristol today. Pictured: The Bristol clash with protesters with their faces covered holding trans and LGBT flags seen

The World Naked Bike Ride has been held every year since 2004, with the exception of 2020 as a result of the pandemic coronavirus.

The annual event initially aimed to campaign for environmental sustainability and improved safety conditions for cyclists in busy cities.

But it has since transformed to promote a variety of causes including body positivity, inclusivity and personal freedom.

Nude cyclists take to the streets of more than 200 cities around the world to celebrate the event, including London, Buenos Aires, Melbourne, Vienna, Sao Paolo, Vancouver, Copenhagen, Paris, Thessaloniki, Tel Aviv and Tokyo.

Prior to the timely arrival of the nude cyclists in Bristol, the women’s rights and trans rights groups were locked in a shouting match promoting their respective causes.

‘We think that is a serious attack on women’s rights.’

But Standing For Women members said that balaclava-clad trans rights activists arrived on the scene yelling ‘trans rights are human rights’ and chanting slogans to protest against TERFs – an acronym which stands for trans-exclusionary radical feminist, ie, feminists who are gender critical. 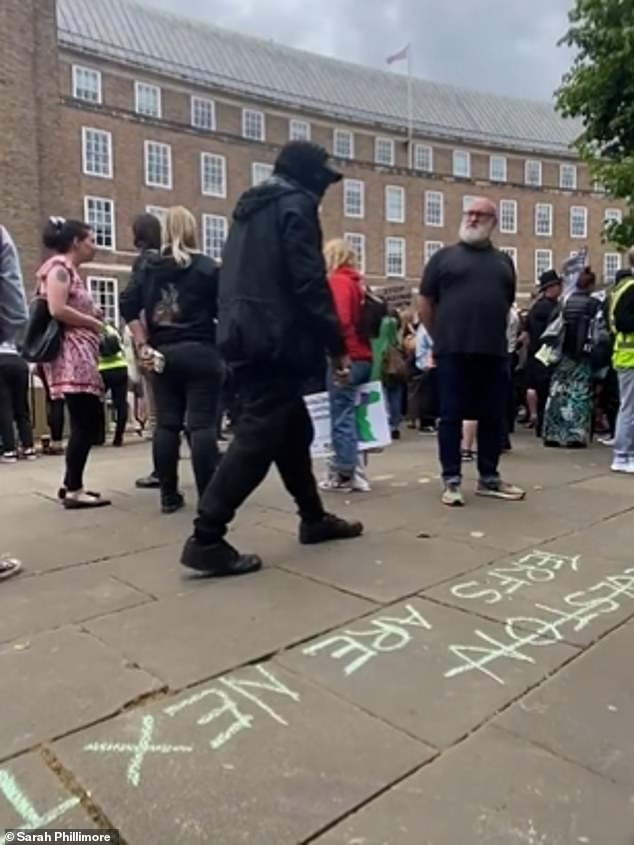 Another man was seen writing on the ground that ‘after Colston TERFs are next’. The slave trader Edward Colston’s statue was thrown in the river in Bristol amid anti-racism protestors in 2020 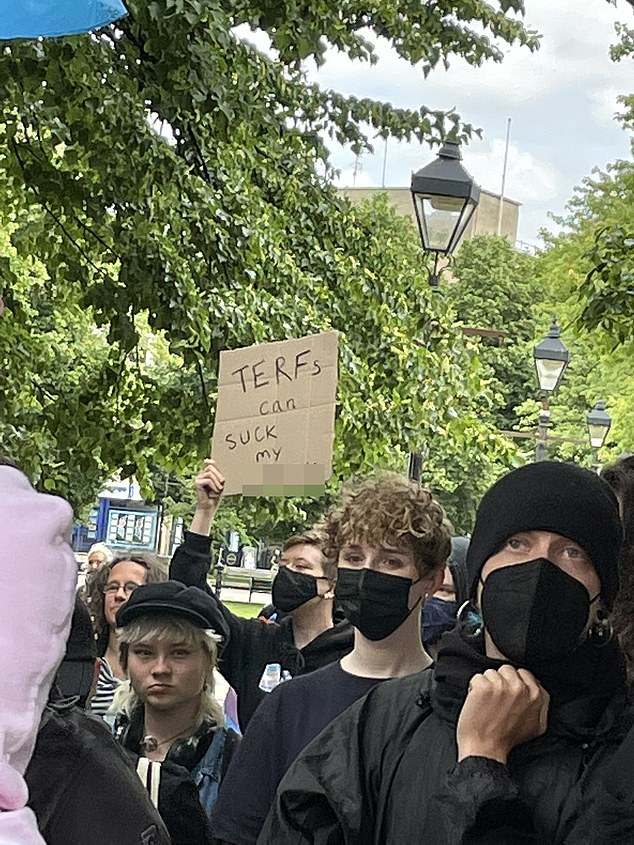 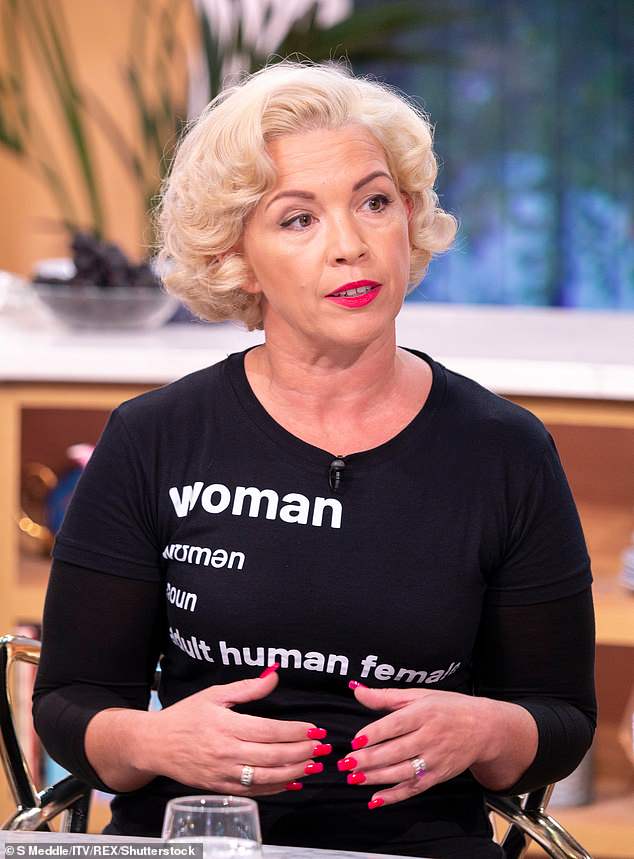 The Standing for Women founder, Kellie-Jay Keen-Minshull, made headlines in 2018 with a controversial billboard defining ‘woman’ as ‘adult human female’ 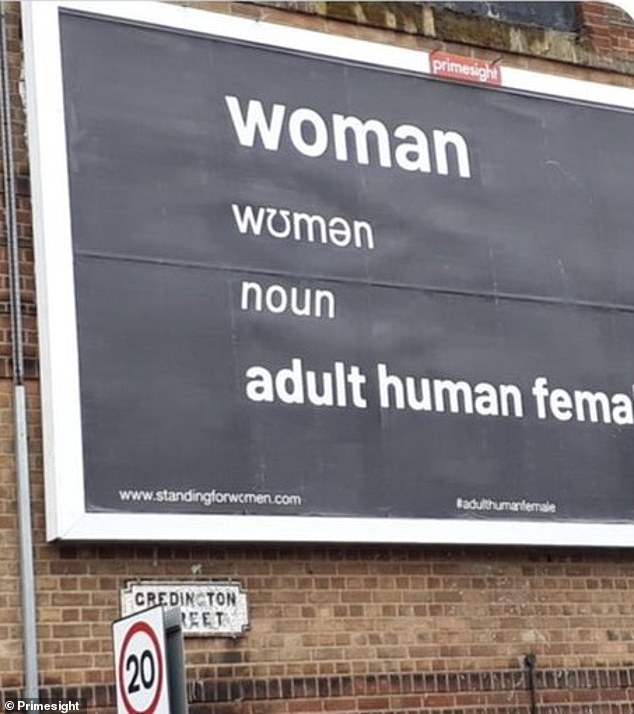 The billboard was erected in Liverpool to coincide with the Labour Party conference but was removed when Dr Adrian Harrop, who is not transgender, judged to billboard company Primesight

The Standing for Women founder, Kellie-Jay Keen-Minshull, made headlines in 2018 when she erected a billboard in Liverpool which defined a ‘woman’ as an ‘adult human female’.

The banner was removed when Dr Adrian Harrop, who is not transgender, commented to billboard company Primesight that it would serve to make transgender women feel unsafe.

Kellie-Jay later drew plaudits and critics in equal measure when she appeared on This Morning to defend the billboard, and her views, in a debate with transgender activist India Willoughby, who transitioned three years ago.