Damian Lewis ensured the legacy of his beloved wife Helen McCrory would live on as he presented an award in her honor on Wednesday.

Helen died aged 52 in April 2021, following a battle with breast cancer, with Damian, 51, presenting The McCrory Award in her memory to help young people seeking a career in the arts.

Damian cut a dapper figure in a black shirt and gray slacks as he posed surrounded by stunning snaps of Helen and her closest celebrity friends. 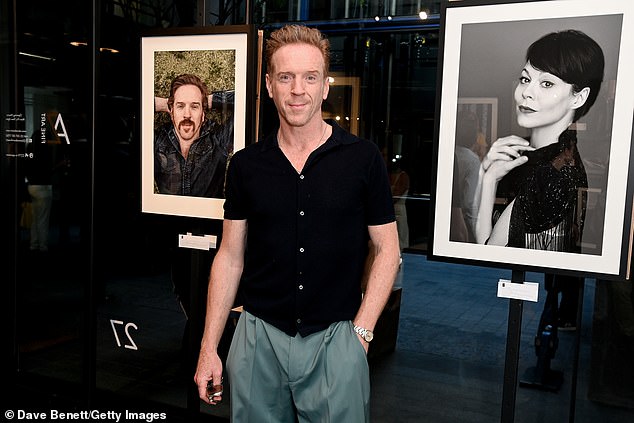 Memories: Damian Lewis ensured the legacy of his beloved wife Helen McCrory would live on as he presented an award in her honor on Wednesday

The photography exhibition in honor of Helen will see proceeds go towards the Hubert von Herkomer Arts Foundation. 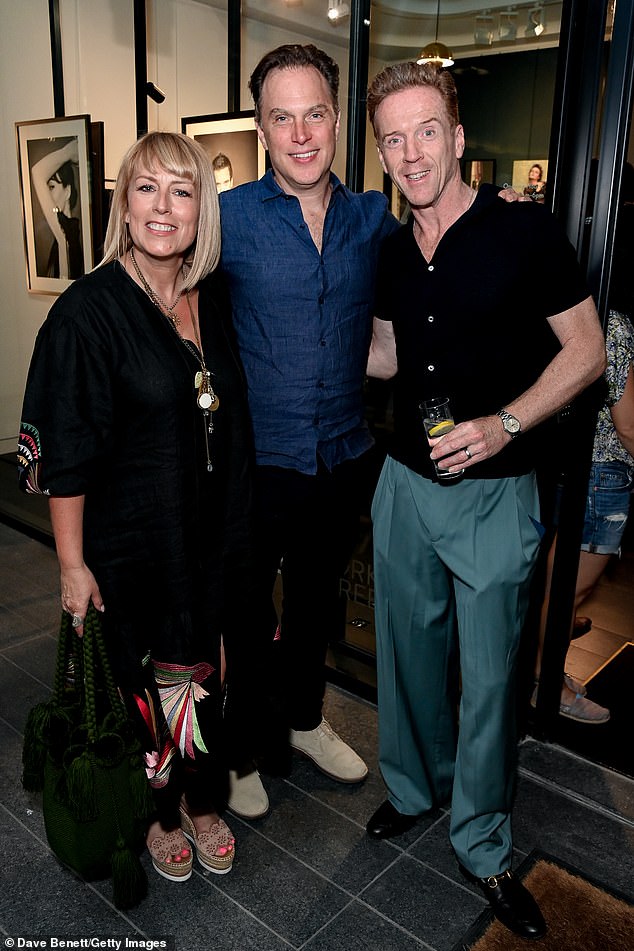 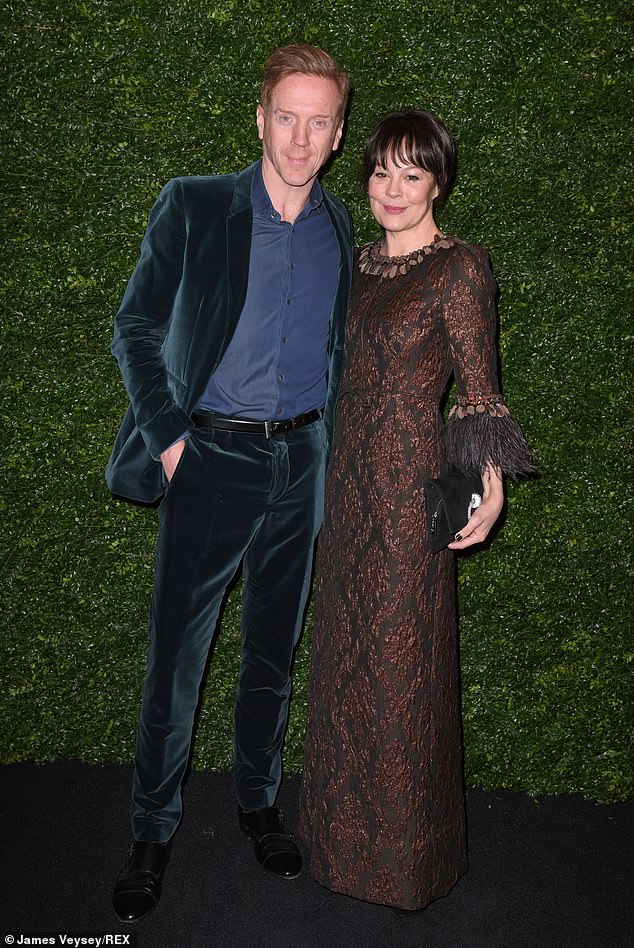 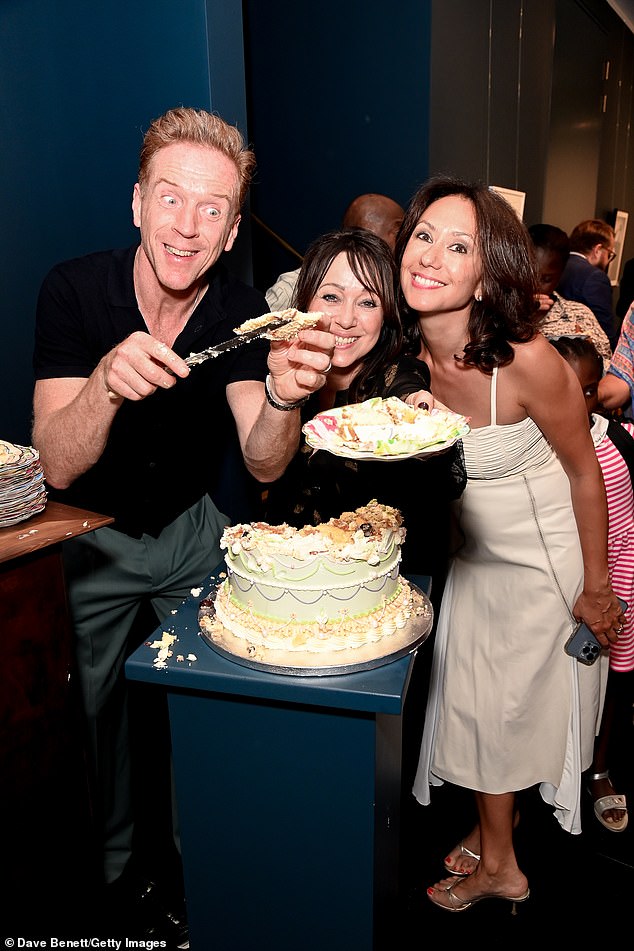 Cake: The star celebrated the award with Debbie Clark and Marina Vyrne Award: Damian presented the award to Joshua Bamgbose on the night

The foundation is dedicated to supporting disadvantaged children and young people who are gifted in their art, yet who do not have access to resources, training or support to fulfill their dream.

Late star Helen believed every child should have equal opportunities and accessibility to the arts.

This comes as Damian reminisced on his first time at Soccer Aid in 2006 with his late wife Helen on Good Morning Britain on Thursday.

He told GMB hosts Kate Garraway and Ben Shepherd that, ‘she’s with us again this year’ as he helps raise money for the charity UNICEF.

The glitzy event aims to raise money for the world’s most disadvantaged children and has raised over £ 60 million since it’s initially beginning in 2006, with last year’s event raising a record-breaking £ 13 million.

The money raised from this year’s game could help UNICEF provide vaccines, fight malnutrition, and provide safe spaces to protect children in times of crisis, helping kids get back to the childhoods they are entitled to. 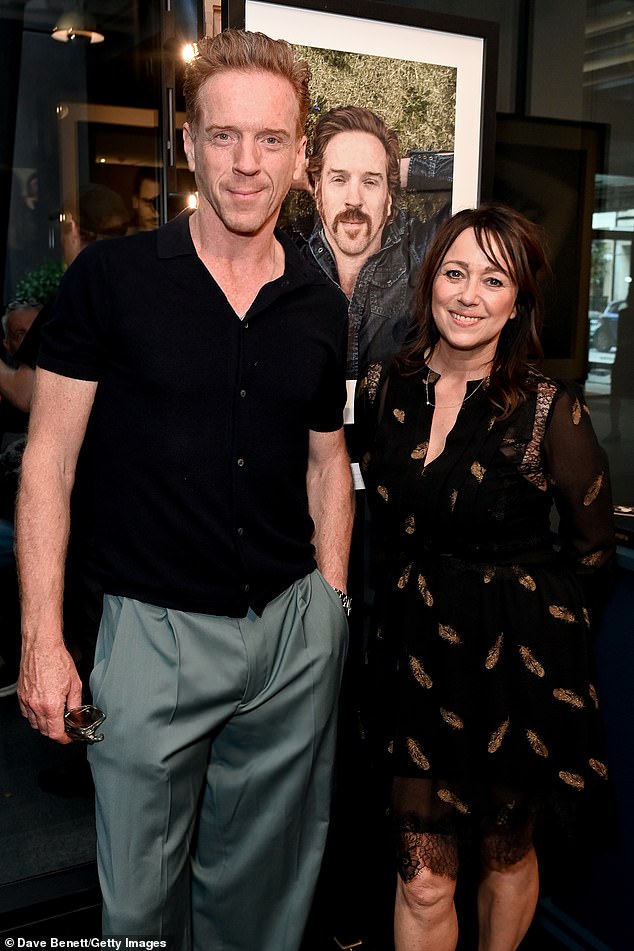 Photo: The star posed up at the event in his wife’s memory 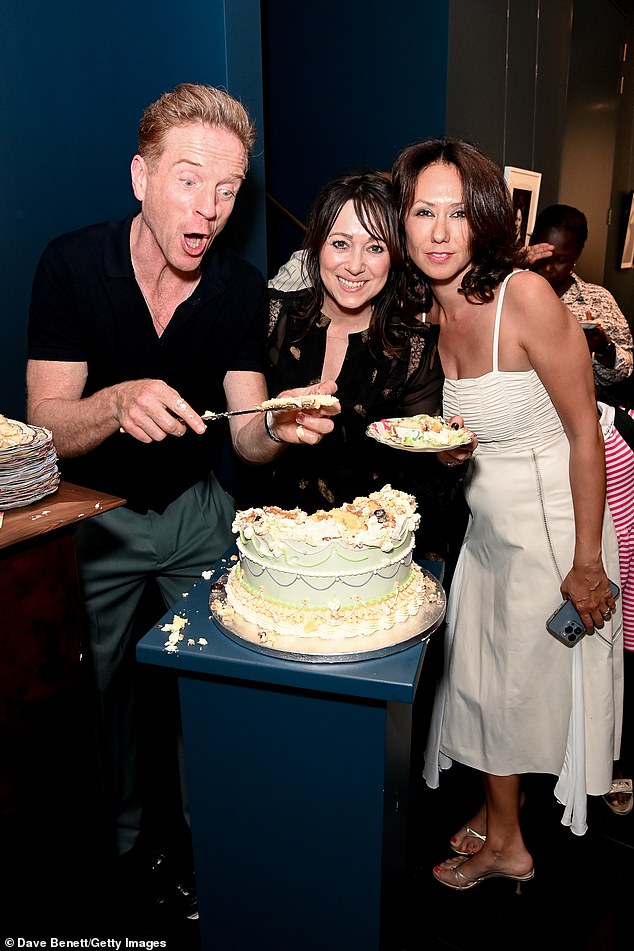 Celebration: Damian cut the cake at the glittering award event 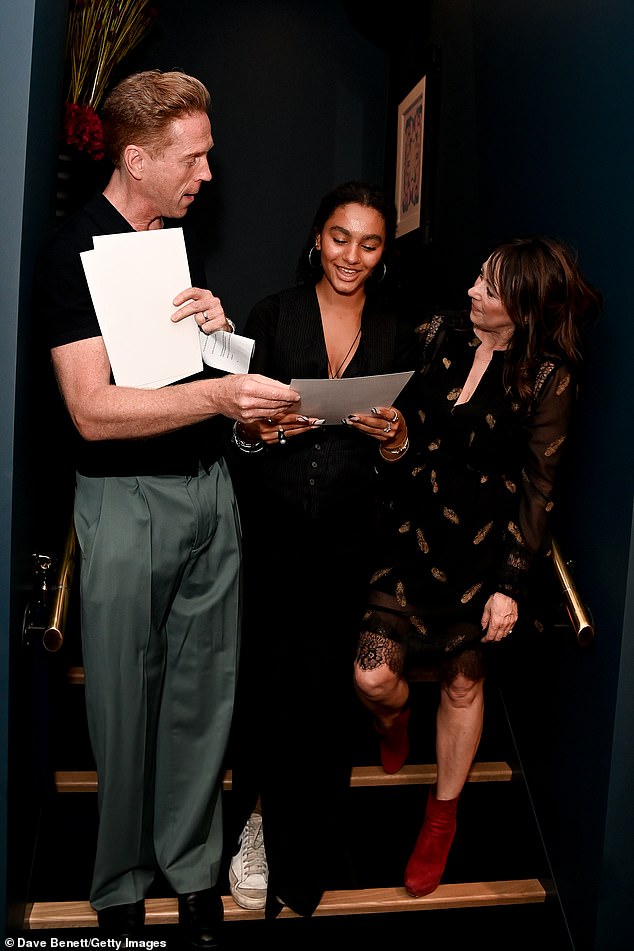 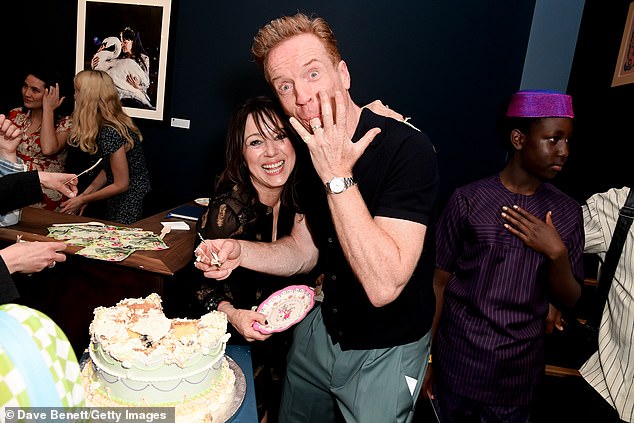 Ceremony: Damian put on a playful display at the awards

On GMB, Ben said: ‘The first time I met you and your lovely wife Helen away from work was at Soccer Aid many years ago in Manchester and you were there with the family and the kids. She was always such a vociferous supporter of you and everything you did.

‘Kate and I were very honoured to be at her memorial service just a few weeks ago. I’d imagine you’ve been very moved by the outpouring of love and support that has been shown towards her since she sadly passed away. ‘

Damian replied, ‘Well, She was a fabulous human being and people from all walks of life have been in touch to say what an impact she had on their lives.

‘That day we had a few weeks ago was a very special day, I’m very glad you could have been part of it and she was celebrated by her tribe, her profession, the acting profession – actors, directors, producers, writers all showed up and she’s much, much missed.

‘When she came to Soccer Aid the very first time, I’d gone into my hotel room at The Lowry in Manchester and it was covered in Union Jack bunting and England flags everywhere which she’d gone out and bought and decorated the room with . So, she’s with us. She’s with us again this year. ‘ 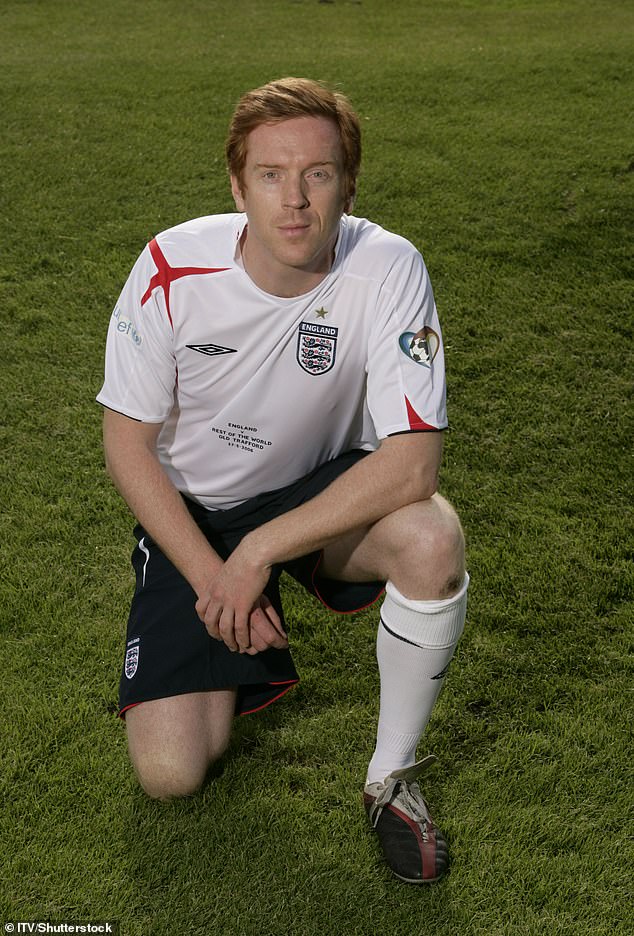 Supportive: Damian first took part in Soccer Aid in 2006, (pictured) and said his wife decorated his hotel room with bunting as a sweet gesture

Kate added, ‘As you say, she touched so many people’s lives that we all feel the loss that obviously you live with every day, a little fraction of it anyway.’

Helena Bonham Carter, Ralph Fiennes, and Keeley Hawes were among those who packed out at St. Paul’s Church in London’s Covent Garden last month, a year after Helen sadly died.

Damian was pictured arriving with their children, daughter Manon, 15, who delivered a reading, and son Gulliver, 14, who played the guitar.

The hour-long service opened with Beethoven’s Ode to Joy and was followed by a prayer and the hymn Guide me, O thou Great Redeemer.

Readings included one about her ‘leading men’, while another was a recital of Maya Angelou’s poem, Touched by an Angel.

Helen was known for her roles as the villainous Narcissa Malfoy in the Harry Potter films and as matriarch Aunt Polly in Peaky Blinders, the final series of which paid tribute to her.

As well as her Harry Potter co-stars Miss Bonham Carter and Fiennes, many Peaky Blinders actors were in attendance including brothers Joe and Finn Cole, who play her on-screen nephew and son John and Michael Shelby. Other guests included Eddie Redmayne, Benedict Cumberbatch and Natascha McElhone. 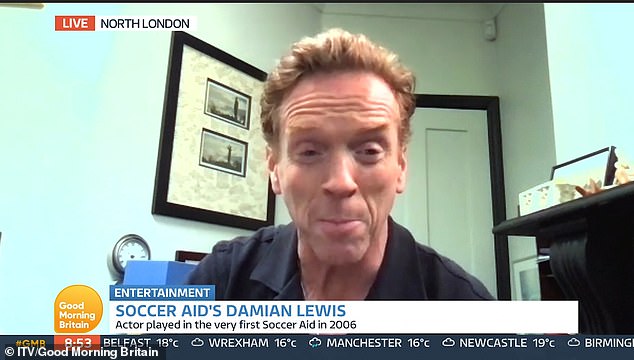 Talking about the memorial, Damian said: ‘She was celebrated by her tribe, her profession, the acting profession – actors, directors, producers, writers all showed up and she’s much, much missed’

Lewis, who married Miss McCrory in 2007, announced her death in a heartbreaking statement on social media in April last year.

Appointed an OBE in the 2017 New Year Honors for services to drama, Miss McCrory was also an award-winning stage actress, working with the National Theater, the Almeida and the Donmar Warehouse and playing Lady Macbeth at Shakespeare’s Globe.

Rufus Norris, artistic director of the National Theater, said she was ‘unquestionably one of the great actors of her generation’.

Miss McCrory made her final TV appearance in March last year, joining Lewis on Good Morning Britain to promote their work with The Prince’s Trust charity. 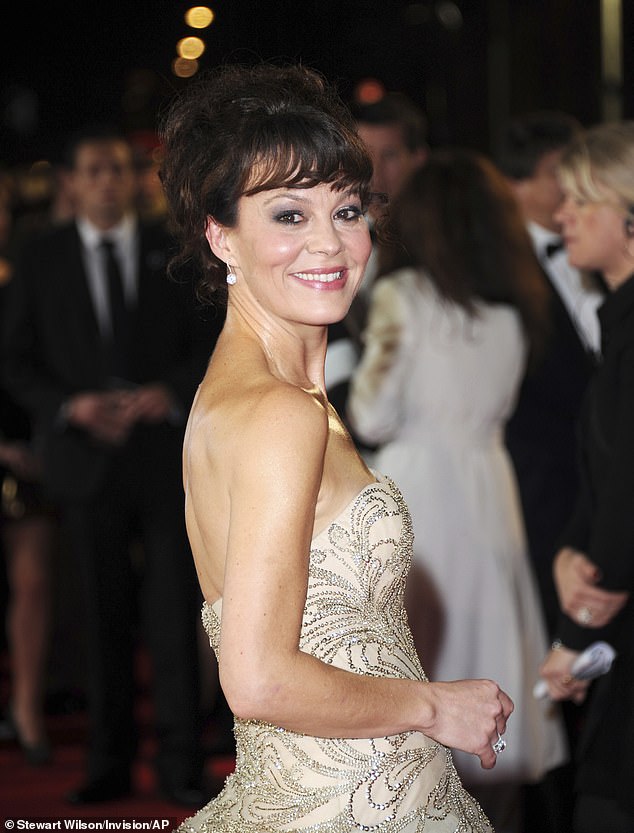 Damian said of his late wife: ‘Well, She was a fabulous human being and people from all walks of life have been in touch to say what an impact she had on their lives’ (pictured in October 2012)