The French manufacturer Citroen entered the Indian car market last year with the C5 Aircross. But this time around, Citroen wants to hammer the mass segment. There comes the Citroen C3 comes into the picture. The new C3 is based on a new platform that will spawn a lot of new models including an electric model in the future. Well, we will talk about the future. We drove the Citroen C3 around Goa and here is what we think about the newest car in the town.

In short, the Citroen C3 looks funky. Actually, it looks like a scaled-down version of the C5 Aircross. The Citroen C3 looks very distinctive. The front gets the same Citroen face with the iconic logo that integrates with the bonnet lid of the car. The grille extends to become the uniquely shaped daytime running lamps. The halogen headlamps are positioned in between the diverging DRLs. 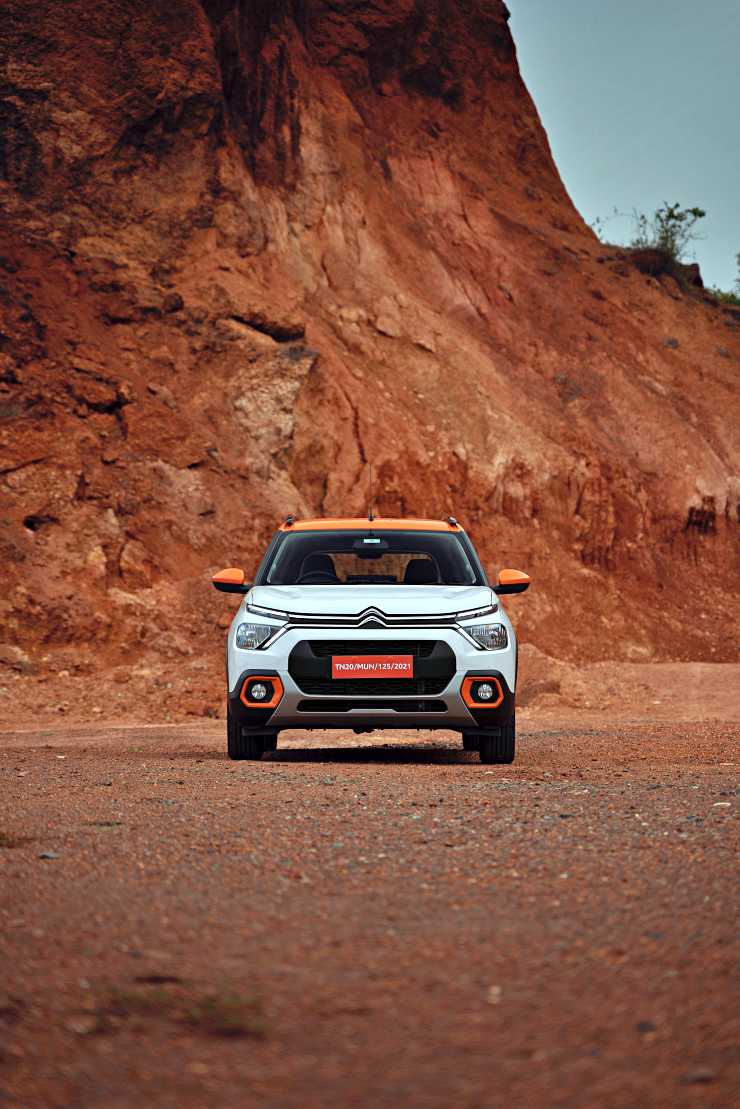 Down below there is a faux skid plate and the fog lamps are positioned inside contrasting orange housings. The C3 definitely looks young among the competitors. Citroen does not offer factory-fitted alloy wheels. You do get alloy-wheel-styled wheel covers on the 15-inch rims. The C3 get thick black cladding and a highlighted square that are fake air vents. With the roof rails, the muscular creases and the squarish wheel arches, the Citroen C3 hatchback definitely looks bold. 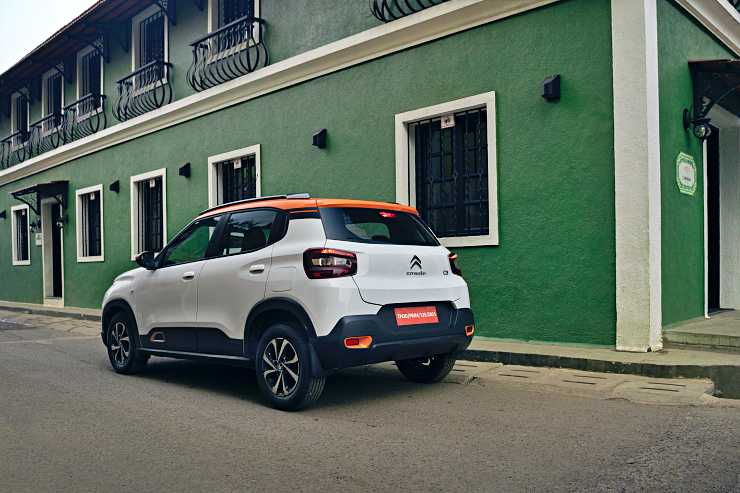 The rear of the C3 hatchback looks interesting with the wraparound tail lamps, a roof-mounted spoiler and the black bumper with a contrasting silver skid plate. 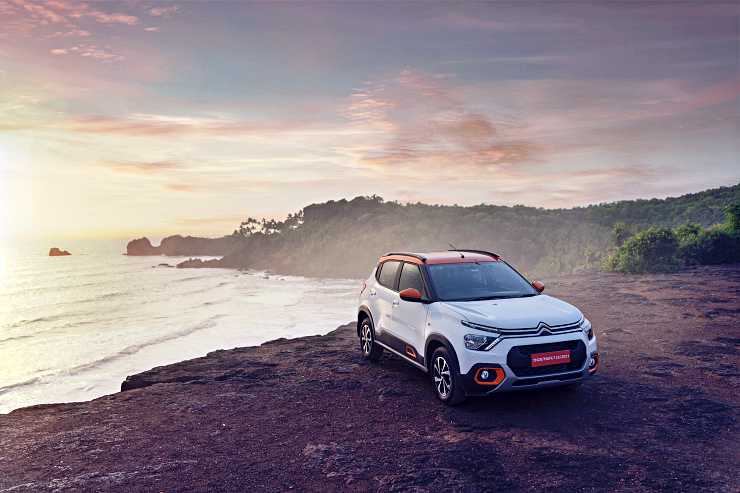 The design of the C3 ensures that it turns heads on the roads. During our drive in Goa, we felt like driving a supercar with the attention we got from the public. In all, the C3 has a great compact size to become the primary vehicle in urban areas. It looks great and is sure designed for the youngsters. 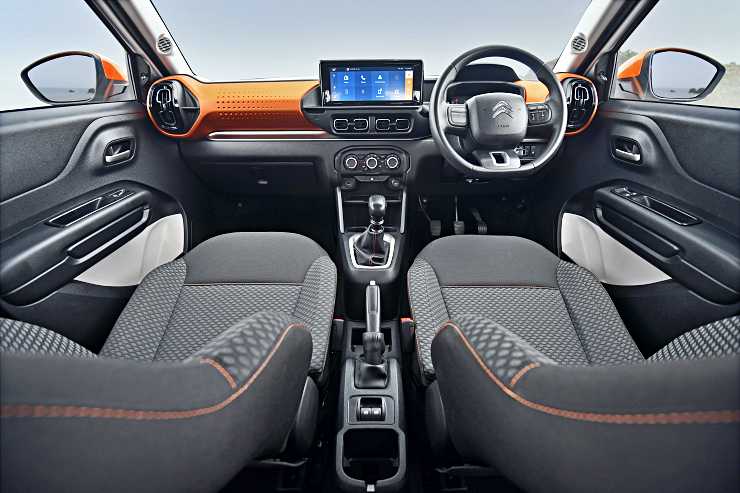 Citroen has designed the cabin of the C3 to complement the exterior. It does look modern and the color of the dashboard matches the color of the roof in the top-end variants. We are not sure how it will work with the entry-level variants though. The dashboard gets solid plastic all over with dimple texture contrasting parts.

The 10.0-inch touchscreen infotainment system takes the center stage. It is very modern in the landscape layout and the graphics. There are various connectivity options including wireless Apple Carplay and Android Auto. The design of the AC vents is from the more expensive Citroen cars and they do look great. The squarish vents can throw out large volumes of cold air at you. There are no rear AC vents so the ones on the dashboard work well for the rear passengers too. The climate control system is not automatic. There are dials to control the airflow and temperature. The driver gets a flat-bottom steering wheel. Citroen has designed the steering wheel to be smaller in size to maneuver the car quickly through the small spaces. More on it later.

The steering wheel gets controls the infotainment system. The driver’s instrument cluster is a tiny monochrome unit. It does show a lot of information including average fuel economy and gear shift indicator. The rear passengers do not get much. There are no reading lamps. There are two USB ports though. Aimed at the youngsters, the additional USB ports will be useful to many. 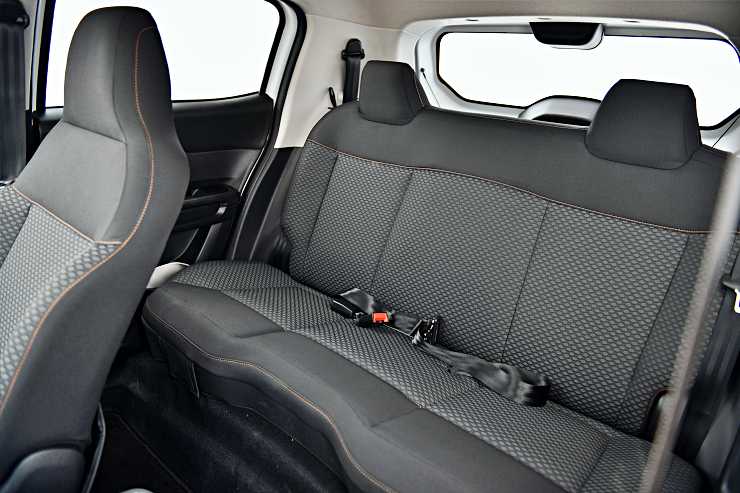 The Citroen C3 is all about comfort! The seats are well cushioned and very well shaped to support the body. In fact, it is the most comfortable car in the segment, hands down! The suspension setup also helps and we will talk about it in the next section.

You sit very high on the front seats which ensures great visibility. Even at the lowest setting, you can see the entire bonnet. The rear passengers get theatre-like seats. It means that the position of the rear seats is higher than the front seats and it gives a clear view of the road ahead.

Citroen has always been very generous with space. The new C3 is not any different. It is one of the widest cars in the segment. That translates into a lot of shoulder room. In fact, Citroen claims that the shoulder room is 50mm more than the closest competition. You do feel a sense of space inside the car. Even though a third passenger in the rear seat can be a hard squeeze, especially with the tunnel hump, the Citroen C3 can sit two very comfortably, even for long journeys on the rear seats.

The C3 also gets a lot of smart spaces. Like there is space in the central console for the phone and other items. While you get large bottle holders on all the four doors of the vehicle. The Citroen C3 also gets seat pockets. 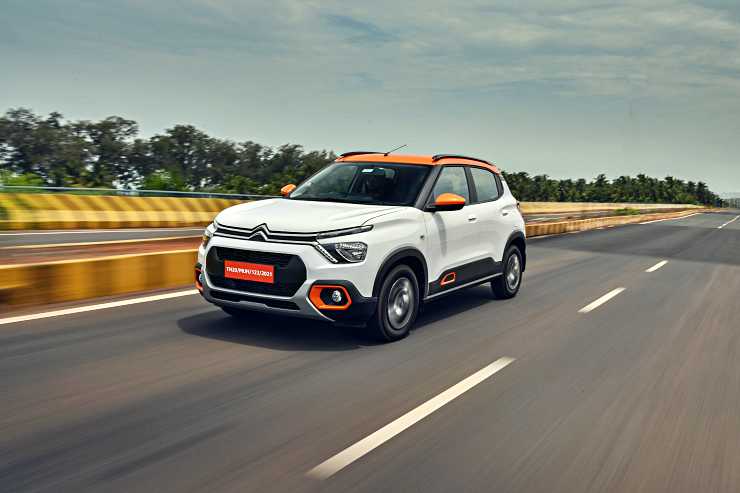 Just like the C5 Aircross is the most comfortable car in the segment, we can easily say the same about the C3. Citroen uses the progressive hydraulic cushions technology in the suspension. It gives a flying carpet effect. It sure isn’t a gimmick. Sat in the C3 for a few kilometers to realize that the suspension set-up is wonderful. It absorbs all the potholes and undulations from the road surface to give you a smooth, steady ride. There is not much vertical movement in the vehicle even while going through the speed-breakers. 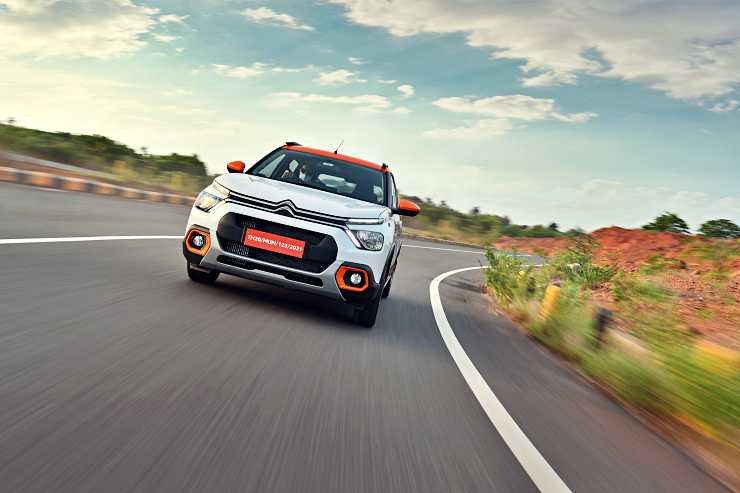 Does that mean that the suspension set-up is soft? Not at all. You can gun the car on the corners without worrying too much about the body roll. Also, this “hatchback” can reach a few extreme places, if you have the heart for it. The Citroen C3 with its 180mm of ground clearance can climb on rocky surfaces and the short overhangs ensure that the bumpers remain free from scratches.

What powers the Citroen C3? 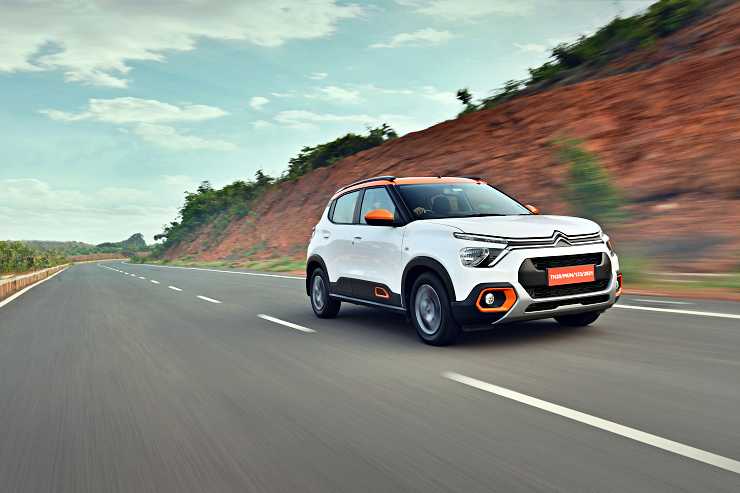 There are two petrol engine options and we drove both of them. First off was the 1.2-liter naturally-aspirated petrol engine that generates a maximum power of 82 PS and peak torque of 115 Nm. This one gets a 5-speed manual transmission. The three-cylinder engine does not feel like one. It is very smooth and even at idling, there are no vibrations suggesting that it is a three-cylinder.

The power delivery is very linear. The five-speed transmission gets tall gear ratios. This means that if you are driving through a congested road, you do not have to shift too many times. In the third gear, the C3 can do 20 km/h to more than 100 km/h comfortably. That’s a pretty wide range.

We drove the more 1.2-litre turbocharged petrol as well. With the light weight of the car and maximum power of 110 PS with 190 Nm of peak torque, the hatchback can achieve some good speed in short distances. Citroen says that the 1.2-litre turbo engine can push the car to around 100 km/h from a standstill. While we could not test the claim, we sure can say that the turbo did feel very quick. Due to the high seating position, the C3 does not feel like a hoot but it sure is a quick car. The turbo engine gets a 6-speed transmission. The gear ratios are slightly different which makes it accelerate quicker but the middle gear ratios remain tall.

The 1.2-litre naturally-aspirated did feel sufficient for daily needs but it never hurts to have higher power if you have the spare money. But we think that the naturally aspirated engine is sufficient.

Since we do not know the price of the car, we cannot explicitly say that these features are missing. But the features that we feel are missing from the brochure include alloy wheels, auto-dimming IRVM, pull-type door handles, headrests on all the seats and armrests for both front and rear passengers. Off all, we think the headrests are the most critical miss in the Citroen C3. Headrests can save the passengers from whiplash in accidents and it is an important feature. The rest of the missing features can be justified by the pricing that we will get to know soon.

Should you buy it? 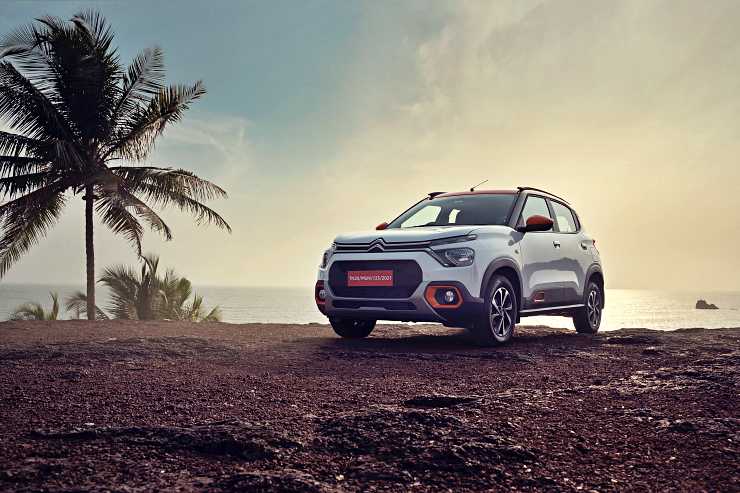 Again, we cannot give you a recommendation before the prices are out. The success of the Citroen C3 depends on the price of the product. Without a sticker price, it looks like a great buy for the youngsters who want to stand out in the crowd. It is highly customizable and we believe the new model will attract a lot of footfalls in the showrooms.