It is a story of childhood revenge which has yet to be forgotten more than half a century on. As a child, the Duchess of Cornwall, fresh from a row with her younger sister Annabel, stole her teddy bear and buried it under the roses in her grandmother’s garden.

Like the toy, the crime remained covered up for decades, with Camilla only confessing on the eve of Annabel’s wedding.

Today, the sisters born 18 months apart are so close that they speak ‘most days’.

But all is not forgiven. 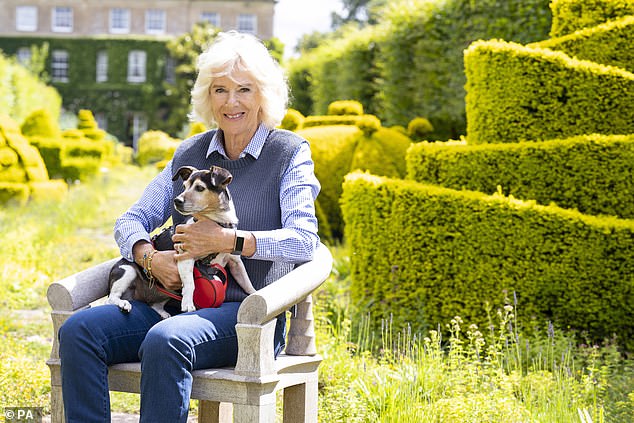 When Annabel, who married Simon Elliot in 1972, is asked if she has forgiven her sister, she says: ‘Certainly not. It still rankles to this day.’

The childhood memory is just one of several surprising anecdotes about the future Queen Consort set to emerge in an ITV documentary this week.

We learn that Camilla used to enjoy ‘sneaking a crafty fag’ with former Top Gear presenter Jeremy Clarkson (a vice she gave up ‘decades ago’), is known to tell ‘risqué and naughty jokes’, and loves ‘invigorating’ cold- water swimming along the English coast.

But perhaps one of the most surprising revelations about the woman who will one day be crowned Queen is that she has a secret love of garden gnomes.

‘No place like a gnome!’ she says ‘Actually the Prince does at Highgrove, too – he’s got a gnome hidden away.’

To mark the Duchess of Cornwall’s 75th birthday next Sunday, an ITV film crew shadowed Camilla as she guest-edited Country Life magazine and undertook visits around the country. 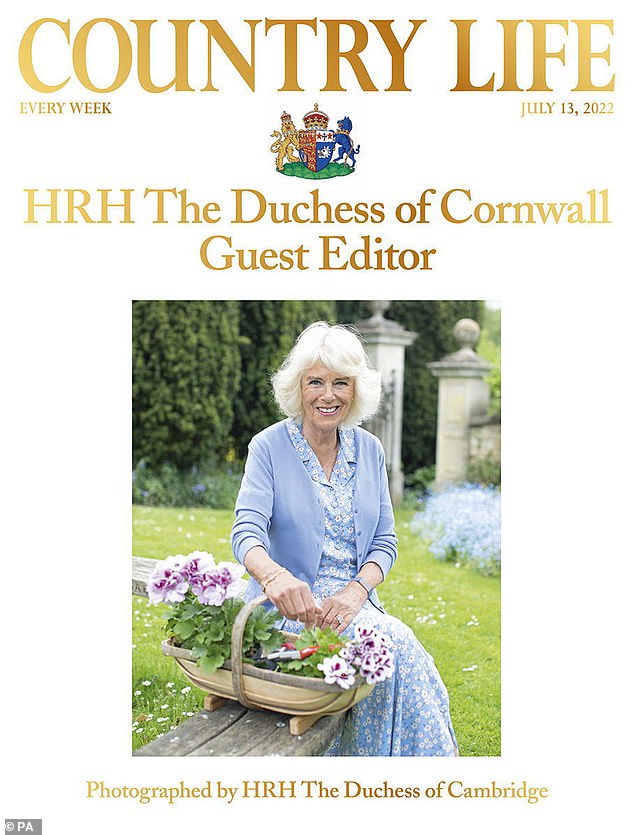 A rare interview at Highgrove, the home near Tetbury in Gloucestershire she shares with Prince Charles, shows a more relaxed Camilla walking in the grounds with her Jack Russells.

When the staff at Country Life inquired as to which photographer Camilla would like to choose for her cover shoot, the answer had them flummoxed at first.

Mark Hedges, Country Life editor, said: ‘When we first met back in January and we were sitting there I said, “Obviously we need a photo for the cover. Do you have any preference for photographers?

She immediately said, “Catherine.” And none of us could think who she meant. And then some light bulbs started going on.’ 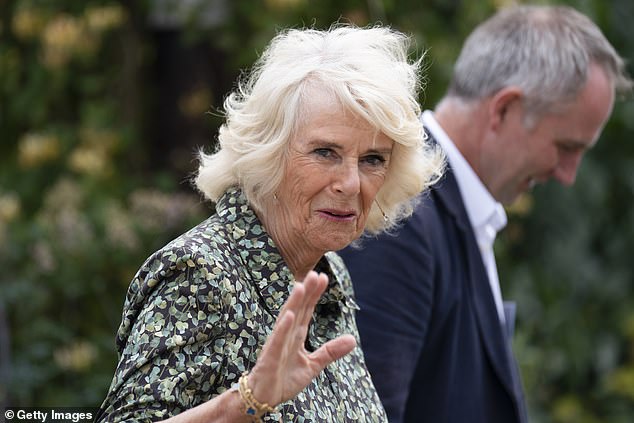 The Duchess of Cornwall is pictured at a Monmouthshire farm to mark Wales Week, July 6

CAMILLA meant, of course, the Duchess of Cambridge, who is a keen amateur photographer known for taking official portraits of her own children.

Kate took the pictures of Camilla at Ray Mill, her country retreat in Lacock, Wiltshire.

‘It was very relaxed,’ recalls Camilla. ‘[It was] very kind of the Duchess of Cambridge – [she] came with her camera. She’s an extremely good photographer and it was all very casual, there wasn’t much hair and make-up – it was just done in the garden with a lot of laughs. It was a lovely way of doing it.’

There are lots of laughs to be expected in the upcoming special edition of Country Life, too, as the Duchess reveals her sense of mischief.

Staff at the 125-year-old publication, which historically featured a full-page photograph of debutante ‘girls in pearls’, quickly got a sense of Camilla’s quick wit when they saw that she had dressed her two female Jack Russells – Beth and Bluebell – in pearl necklaces to stand in as the ‘girls in pearls’. 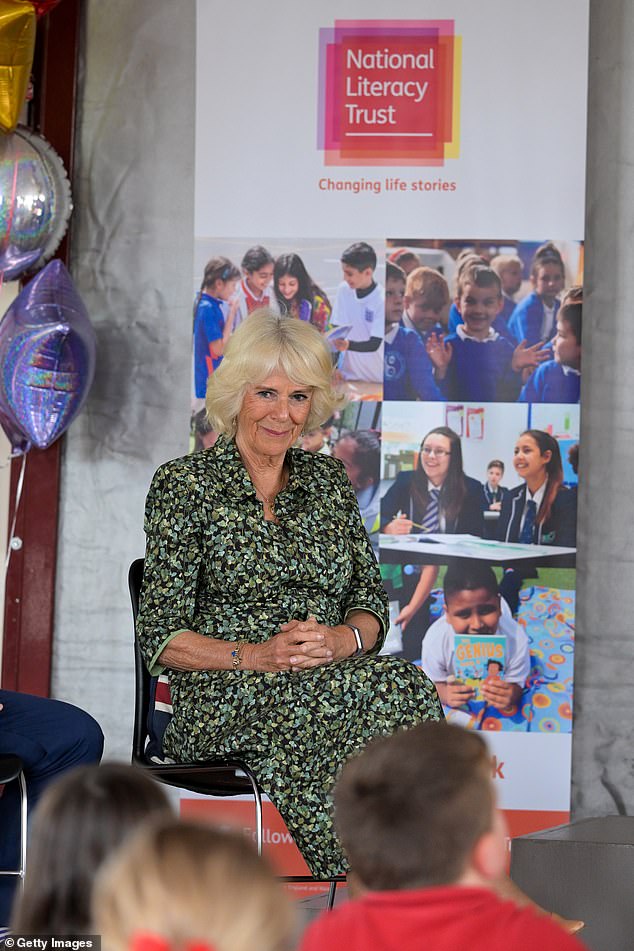 Later in the documentary, when asked if it was true that Camilla was known to tell ‘the odd slightly naughty joke’, Sarah Troughton, one of the Queen’s cousins ​​and a friend of Camilla, not only confirms the rumor but goes one better.

‘Oh, lots of very risqué [jokes]I would say, as well as naughty.’

The documentary reveals the Duchess of Cornwall as we have never seen her before, while simultaneously confirming everything that many people may have long suspected. Camilla shares the Queen’s love for horses and dogs, her husband’s passion for the countryside and gardening, and has been known to have the odd sneaky cigarette.

As she puts it herself, her British sensibility that you must ‘take a deep breath and get on with it’ is one that will endear her to the public.

So while much of her work is about supporting the Prince of Wales in his endeavours, the documentary puts Camilla in the spotlight in her own right.

Charles makes only a small appearance and has very few mentions in the program, which airs on Wednesday, except to pop up at Clarence House to oversee the proposed pages for Camilla’s edition of Country Life.

She has also written about him for her special edition, saying: ‘It’s not easy writing about your husband, I’ve been through several pencils.’

The decision to allow a documentary crew to shadow the Duchess is part of a PR drive backed by the Palace to establish the Duchess of Cornwall as a deserving future Queen Consort. As well as this week’s documentary, Camilla appeared in Vogue magazine and, as this latest program shows, guest-edited Country Life. It is a campaign firmly supported by the Queen, who in February used her Accession Day message marking 70 years on the Throne to back Camilla, saying that it was her ‘sincere wish’ for her daughter-in-law to be known as Queen Consort ‘when the time comes’.

As The Mail on Sunday revealed in February, detailed plans are in place for Camilla to be crowned alongside her husband when he becomes King. The pair will also embark on an extensive tour of the UK in the run-up to the Coronation.

Camilla has done a lot to shrug off the mistress narrative that lingered for years following Charles’s divorce from Diana, Princess of Wales.

While this documentary is largely positive, the controversy is a part of history that cannot be ignored. The film-makers mischievously point out that Alice Keppel, Camilla’s great-grandmother, was the favorite mistress of King Edward VII, Prince Charles’s great-great-grandfather. 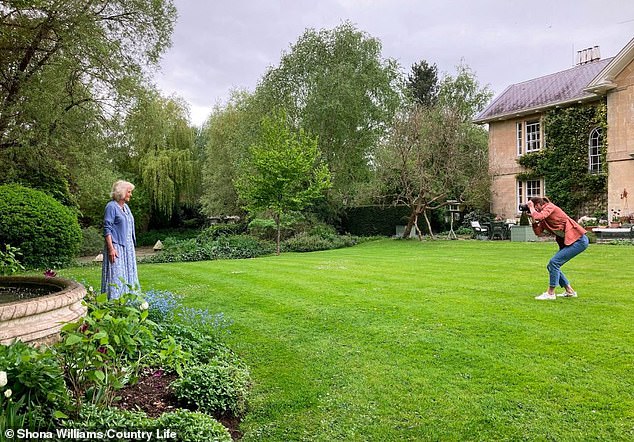 And a charity event organizer is seen saying: ‘I’m a divorced woman and I know what that journey is like. I experienced some hostility and some unpleasantness – nothing like that level but I know how hard it is to maintain dignity and that demeanor and that presence over the decades that she has had to.’

Over the years, Camilla has also had to dispel claims of laziness from former Clarence House aide Mark Bolland, who once wrote in a Sunday Times article: ‘I love Camilla dearly, but she is monumentally lazy (in the nicest possible way).’

It would be hard to level such claims against the Duchess today. Camilla recently returned from Rwanda, where she visited the mass grave of genocide victims. Earlier this year she traveled to Canada on a whirlwind trip to mark the Queen’s Platinum Jubilee year. And further foreign trips are being planned. After her 2016 promotion to the Privy Council, she will be at Charles’s side when he is declared King. The Queen showed further favor this year when Camilla was made a Royal Lady of the Order of the Garter.

But far aside from any positive press the Palace can muster, sources there say the success of Camilla’s transformation can be put down to her own personality.

As a Royal source told The Mail on Sunday: ‘PR for the Duchess of Cornwall is easy to some extent because the raw material, if I can call it that, is good.

‘She’s clever, she’s smart, she’s funny, she’s good for Charles, and when people see that, they can’t help but like her.’

No doubt many inside the Palace will be hoping that showing the public more of Camilla’s personality and her background will help to establish the Duchess as a likeable presence.

Her privileged childhood included summer holidays spent ‘rolling down hills’ at her grandparents’ home, Hall Place, a 12-bedroom country estate in the heart of Hampshire.

The magnificent country pile features in the forthcoming Country Life, and the accompanying documentary shows the Duchess returning to the property.

It was here where Annabel’s teddy bear met his doom. So, when the family seat was sold off, the teddy – ‘Tiddy Bar’ – remained.

Camilla’s sister Annabel is seen in the documentary saying:[She] only owned up to me about a month before I got married that actually she’d buried it.’

The Duchess admits: ‘My sister and I had a bit of an argument so I buried him. It was sibling rivalry – yes, Tiddy Bar. He had a very happy resting ground in the rose garden.’

But not all the stories about Camilla’s early years stand up to scrutiny.

When asked whether there were ponies at her grandmother’s house, the Duchess laughs and says: ‘We never had ponies. [at Hall House] although Gyles Brandreth will swear he met me there in my breeches and smoking a Woodbine.’

As the ITV program shows, some of her fans come from unexpected quarters.

Jeremy Clarkson, the former Top Gear presenter who has taken on a farm in the Cotswolds called Diddly Squat, was chosen by Camilla to be featured.

Camilla says of the presenter, who hosts the Clarkson’s Farm series: ‘He made people realize how difficult farming is. I think some people see farming as cows sitting in a meadow on a beautiful day, and they don’t realize the work and the difficulties that are behind it.’

The Duchess may have second thoughts about his inclusion when she watches the program, however. For Clarkson reveals of her: ‘I think we get on very well. Um, we used to go… perhaps I shouldn’t say this, but we used to go and sneak a crafty fag round the back of things. But I don’t smoke any more.

‘I think she might still sneak a crafty one occasionally, but you’d have to ask her.’

The narrator is then quick to point out to viewers that the Duchess has not ‘smoked in decades’.

Along with quitting smoking, Camilla reveals that what keeps her young is keeping her brain active. ‘I think it is quite important as we all get older to keep going,’ she says. You’ve got to keep the gray cells going. There’s always exciting new prospects, there’s always something exciting around the next corner, you never know what’s going to happen next.’

As Clarkson says: ‘She’s very good with people – she’s got a great twinkle in her eye.

‘There’s no question she obviously came from a privileged background. But not so privileged that the cushions have to be velvet and the blue M&Ms have to be taken out, so you do get the impression that she is one of us.’

It’s this image of Camilla with a twinkle in her eye that many at the Palace, and no doubt the Queen herself, would like the public to see.