The Australian café manager who wrongly claimed Kim Kardashian and Pete Davidson had dined at his restaurant shamelessly resurfaced on Saturday while revealing details about the elaborate hoax.

Matt Black, who went to ground and stopped answering phones after his lie was exposed, was seen beaming as he made his way into work at the Botanica café he manages in Edge Hill in Cairns in far north Queensland.

Mr Black couldn’t wipe the smile off his face while carrying bags of milk and a loaf of bread into his café just 24 hours after sharing a rather cheeky status on Facebook about the saga, writing: ‘Keeping up with Matt Black’.

He then broke his silence to insist he’s simply a ‘larrikin’ and that it was all ‘a joke that backfired’.

Mr Black said he’s known to be a bit of a trickster with locals and never expected to make global headlines. 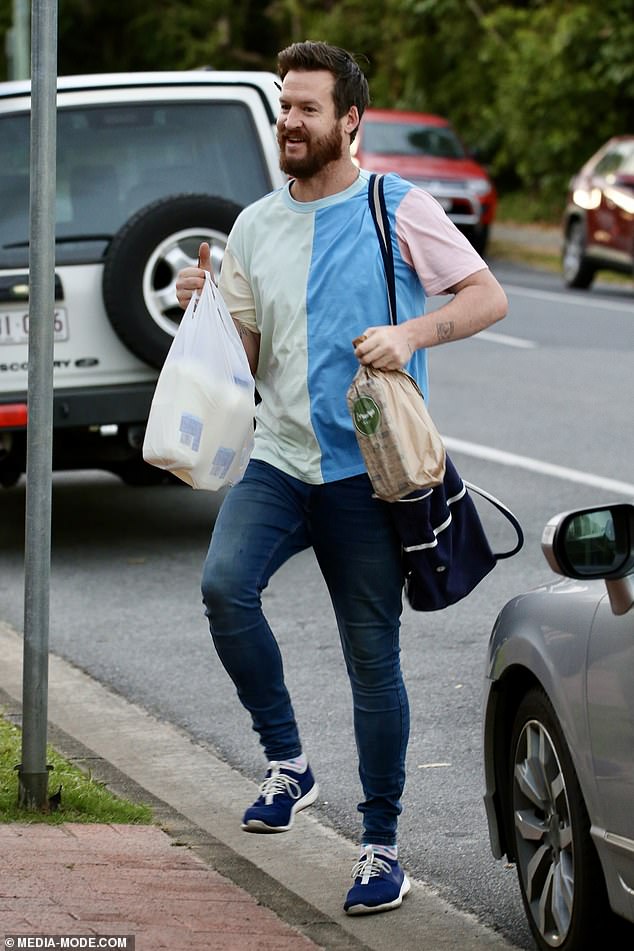 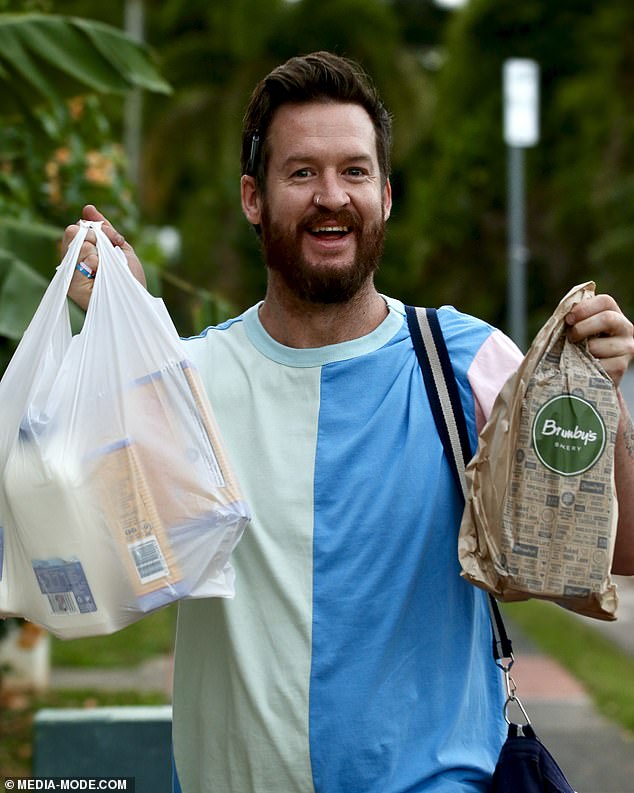 The café manager couldn’t wipe the smile off his face as he made his way inside, carrying bags of milk and a loaf of bread after visiting a bakery

Mr Black shared a rather cheeky status on Facebook on Friday about the Kim Kardashian saga, writing: ‘Keeping up with Matt Black’

‘I’m a larrikin, I just do these things,’ he told TropicNow.

‘People who know me know I stir stuff up on social media.’

Mr Black said he left a cheeky comment on a local news outlet’s Facebook page saying that Kim and Pete had breakfast at his café and it all took off from there and the story went global.

‘At the end of the day it was a little joke and I was going to set the record straight,’ he said.

‘I’m in a bit of a pickle that’s for sure but I’ve had a lot of support, other small businesses saying dude if this is real or not, it’s genius marketing.’

Mr Black said he received interest and calls at the café from journalists all around the world before realizing his little hoax had got out of hand. 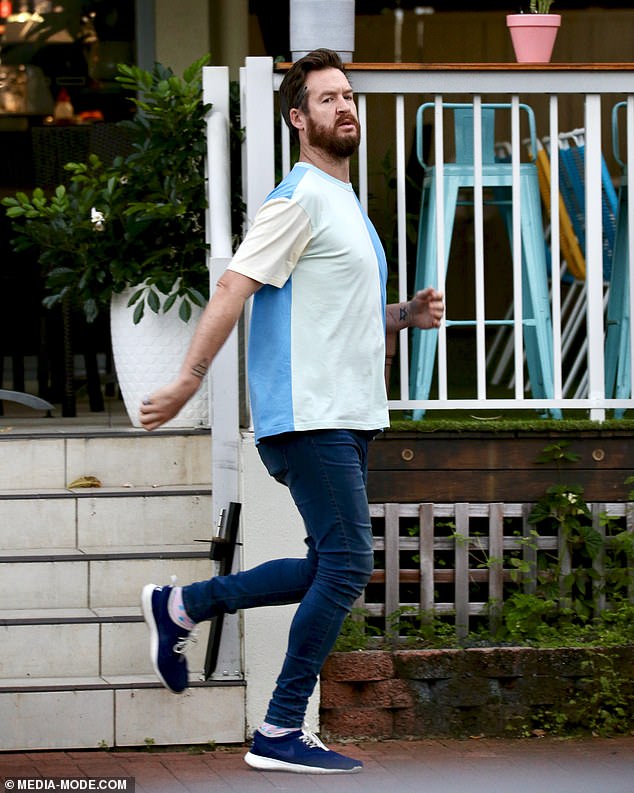 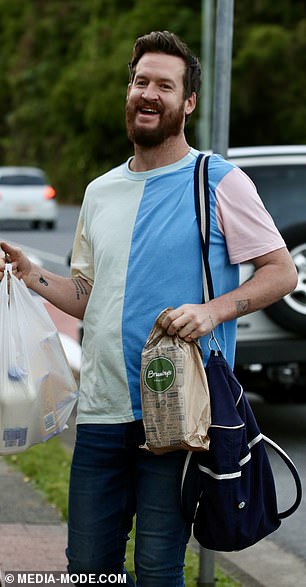 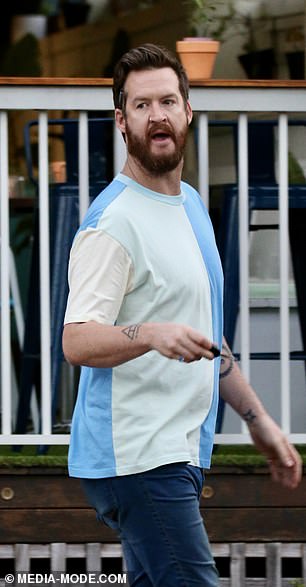 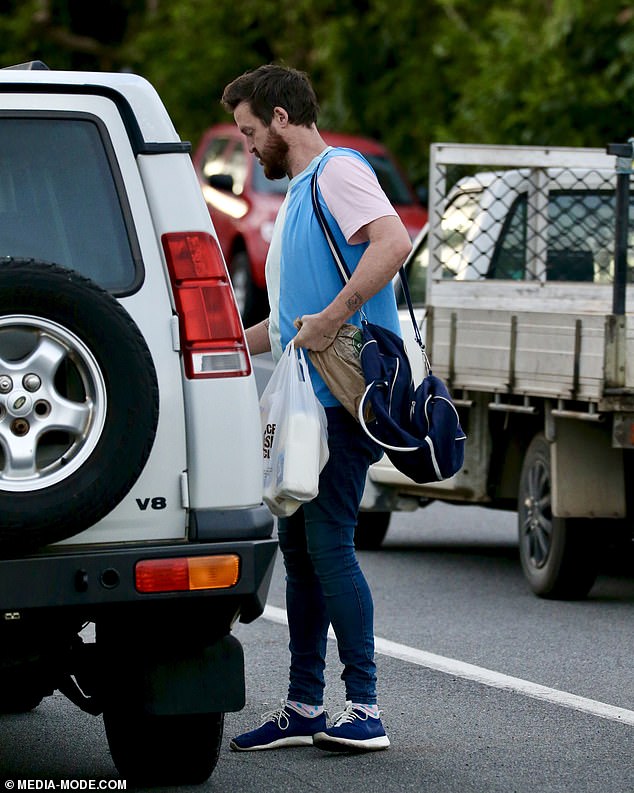 ‘I’m a larrikin, I just do these things,’ he explained

Mr Black lied to them about his alleged encounter with the American reality star and her comedian boyfriend on Wednesday, spinning an elaborate yarn.

He claimed their security team asked café staff to place their phones on the counter for the duration of the pair’s date so no one could take photos of them while they were dining.

‘We had to put our phones out on the counter,’ he claimed to the ABC, adding that the security detail also requested their CCTV footage remain private.

‘There was just me and my barista, and to be honest, he didn’t know who they were. He’s really out of the loop with that sort of stuff. ‘

While Davidson is in Australia filming his new movie Wizards !, his A-list girlfriend has not joined him and is still in Los Angeles with her children.

Mr Black’s story fell apart when it emerged Kardashian had been picturedin LA on Tuesday night just hours before she was supposedly seen brunching 11,000km away in far north Queensland.

A representative for Davidson shot down this fake account, telling Daily Mail Australia: ‘Pete is currently in production in Australia without Kim’.

A source close to Kardashian also confirmed to Daily Mail Australia she hadn’t been in the country ‘in years’. 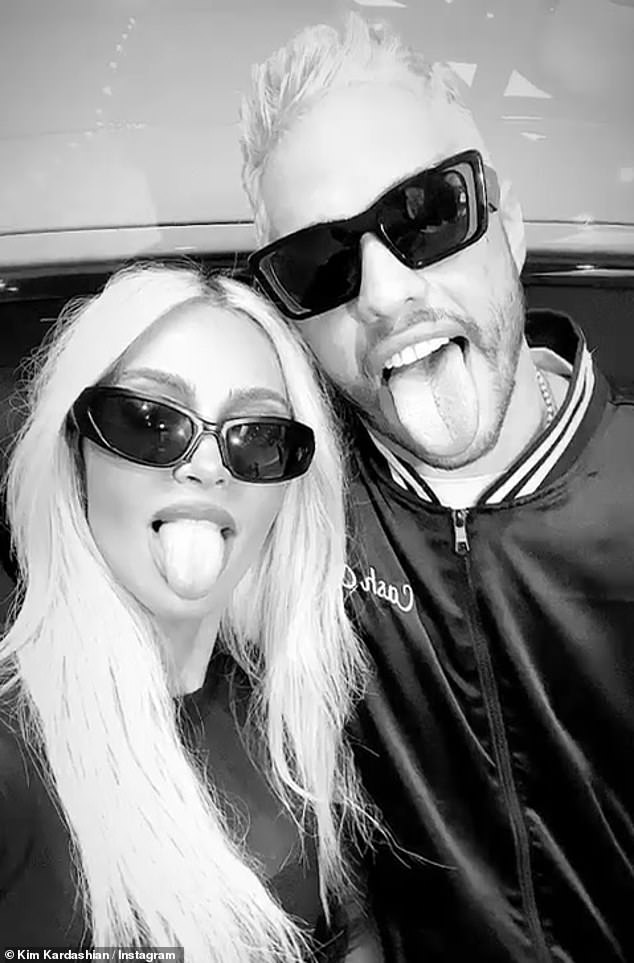 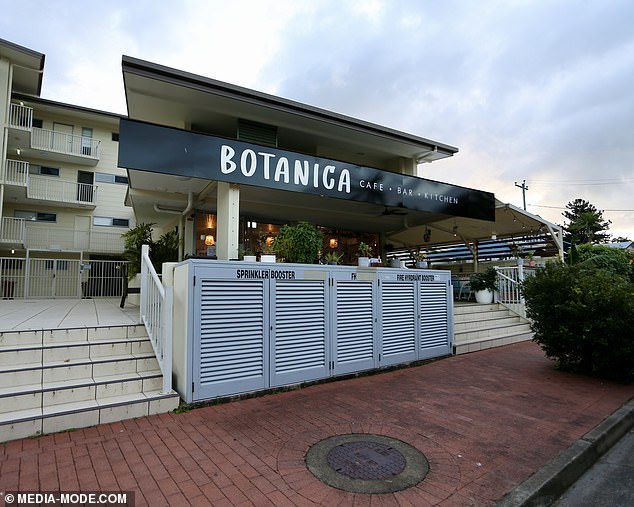 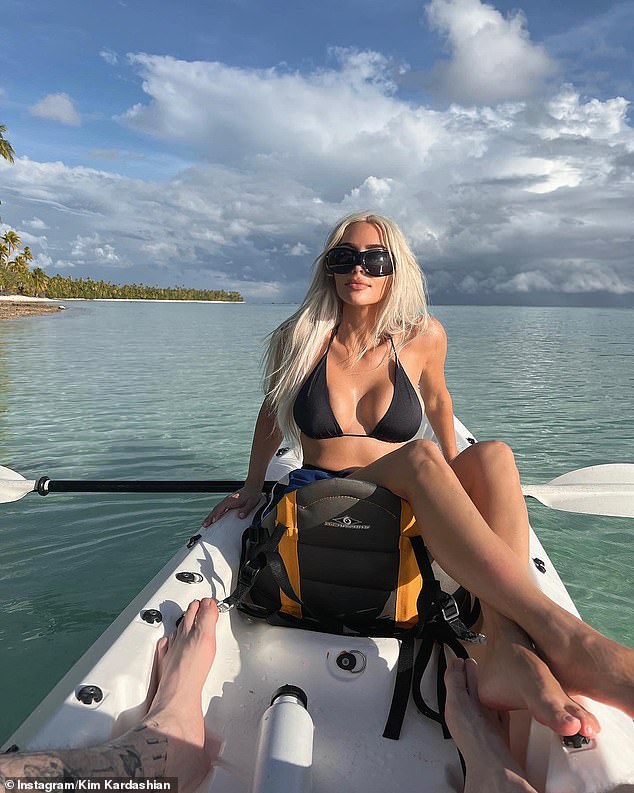 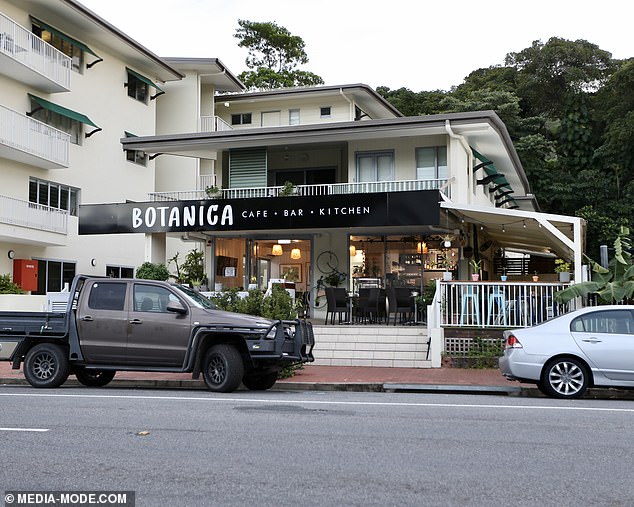 The ABC was far from the only publication to report on the sighting that never occurred, as most of the Australian media lapped up the brush with fame.

The café even posted a video on Instagram of television crews assembling on the street outside, writing: ‘Chasing that scoop!’

Kardashian on Monday shared a gallery of racy snaps while holidaying with Pete at a secluded beach location. ‘Beach for 2,’ her post was captioned on Instagram.

Several Aussie fans commented on her post saying they were on the lookout for the couple in tropical Queensland.

‘My eyes are peeled for you in Cairns!’ one fan wrote.

The holiday photos were reportedly taken in Tahiti at an unspecified date. 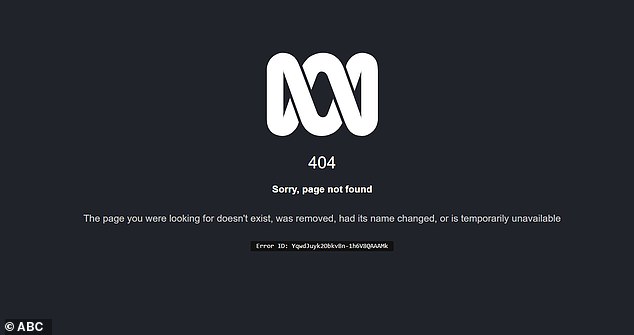 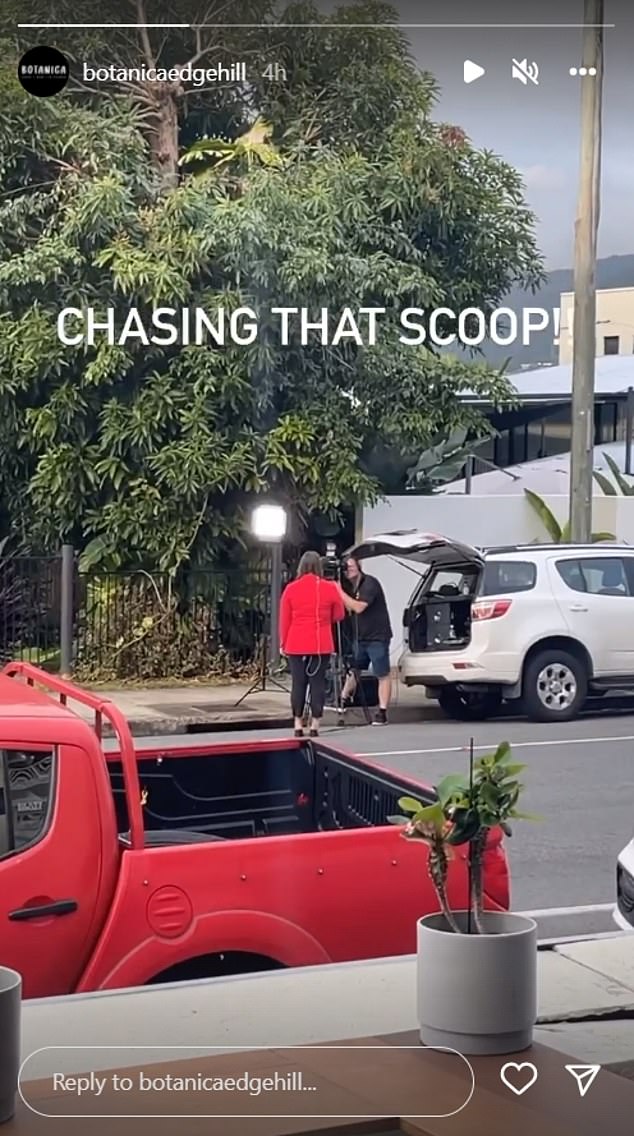 The hoax sighting comes after Davidson was spotted exploring Cairns (for real) on Wednesday night and even stopped to take photos with fans.

In one picture shared to Instagram, the New York native posed alongside a local at the Timezone videogame arcade on Abbott Street.

Other fans claimed to have spotted the King of Staten Island star venturing into a casino on the same night.

The Queensland tourist hotspot has become a hub of A-list activity recently thanks to David Michôd’s new film Wizards! being filmed there for the next three months.

Brad Pitt’s production company, Plan B, is backing the film and production is expected to inject an estimated $ 14.7million into Queensland’s economy. 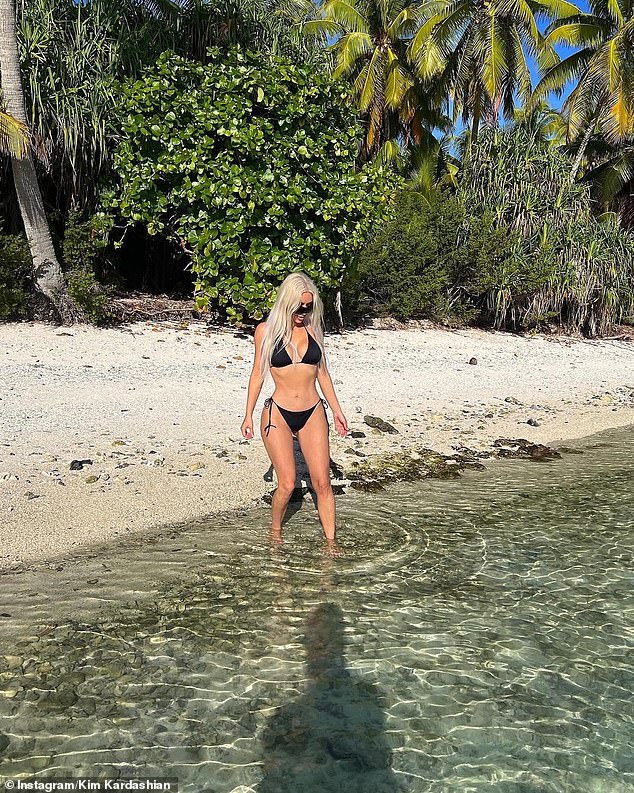 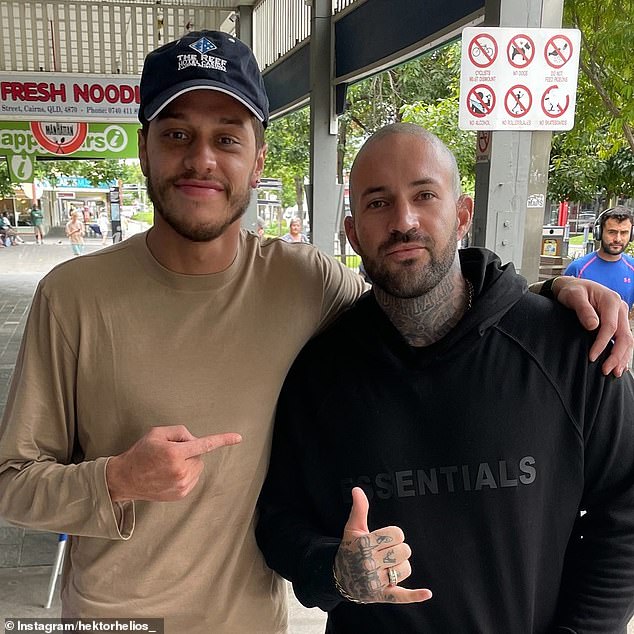 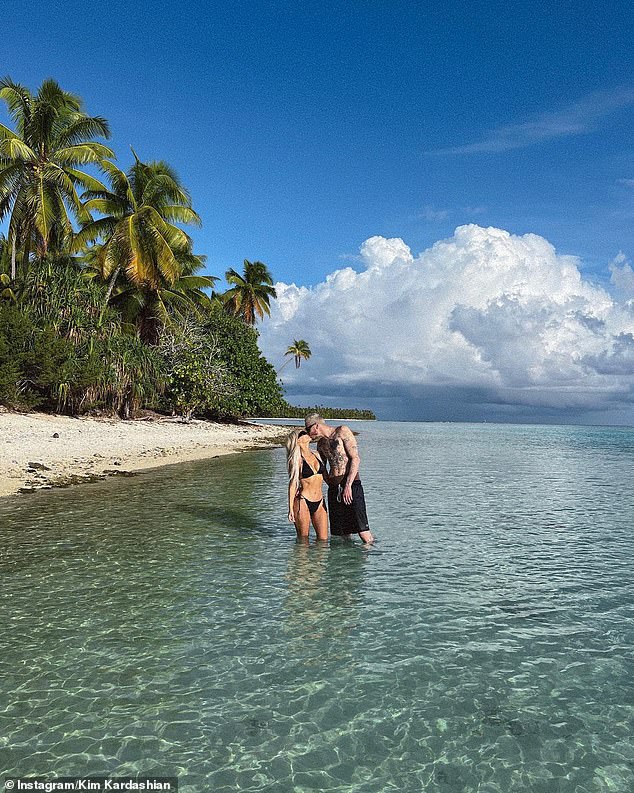 Kardashian and Davidson are pictured on a recent holiday in Tahiti