A man blasted his partner and their two young children to death with a shotgun was a ‘loving father’ who showed no signs of the inner turmoil that would lead to the tragedy, an inquest heard today.

Robert Needham, 42, shot his daughter Ava, four, in the head and his two-year-old daughter Lexi in the chest during the first Covid lockdown in 2020.

He also shot his fiancee Kelly Fitzgibbons, 40, in the head and neck at their £600,000 home in West Sussex.

Mr. Needham is then believed to have turned the gun on himself and shot himself in the head.

All four were found dead at the detached property in the quiet village of Woodmancote on Sunday evening, March 29, 2020 – just a week after the lockdown was imposed.

The two girls, who were described as ‘angelic’ and ‘mischievous’ by family members, were found lying side by side on the double bed in their parents’ bedroom.

Miss Fitzgibbons, a legal secretary, was found lying face down on the floor while Mr. Needham was found in the hallway with the gun cradled in his arms and the barrel pointing towards his head. Two discharged shotgun cartridges were found on the floor. 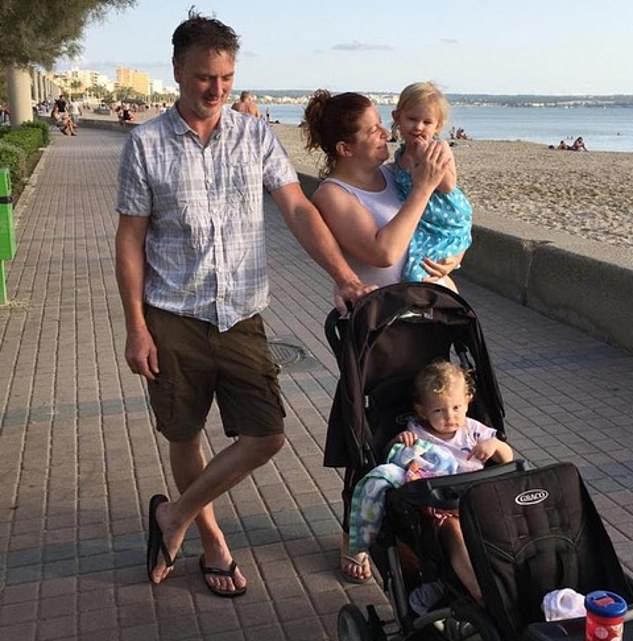 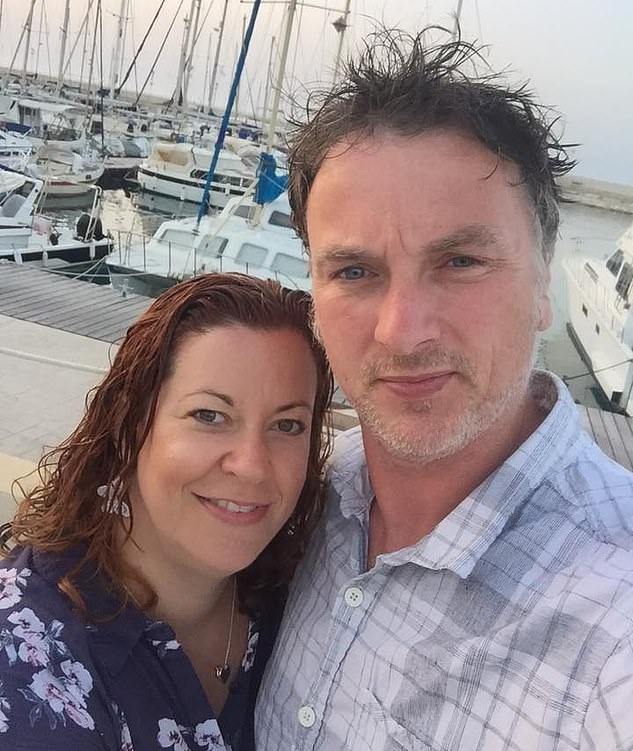 Needham is pictured with Ms. Fitzgibbons. Their bodies were found at their family home in Woodmancote, West Sussex

Today an inquest into the deaths heard there were no signs of the mental stress Mr. Needham was under before the brutal killings.

But the hearing was told that he was a secret cocaine user and, in the days leading up to the tragedy, had tried to get hold of the drug from a supplier without success.

The inquest heard toxicology tests also showed that he had not taken any cocaine at the time of the tragedy.

In a statement read to the court, his family said the killings were a ‘diabolical tragedy’.

They said: ‘The loss of Robert, Kelly, Ava and Lexi has left an agonizing hole in our lives which will never be filled. They appeared to be a strong loving family.

‘There was no indication of the inner turmoil Rob was clearly experiencing. There is no plausible explanation for the destruction caused that night that we can fathom.’ 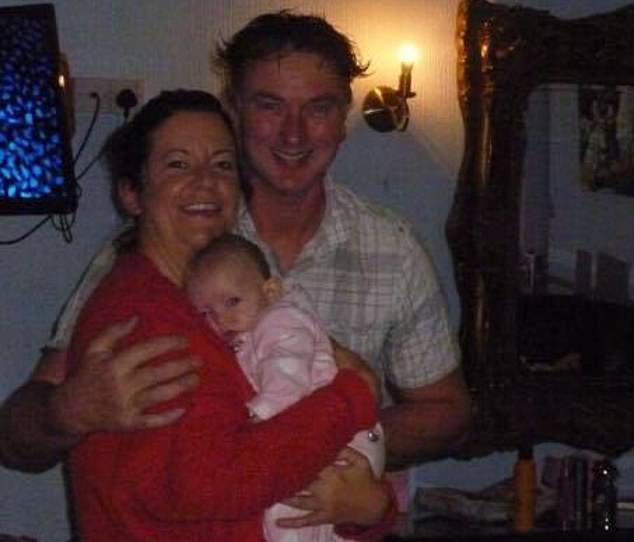 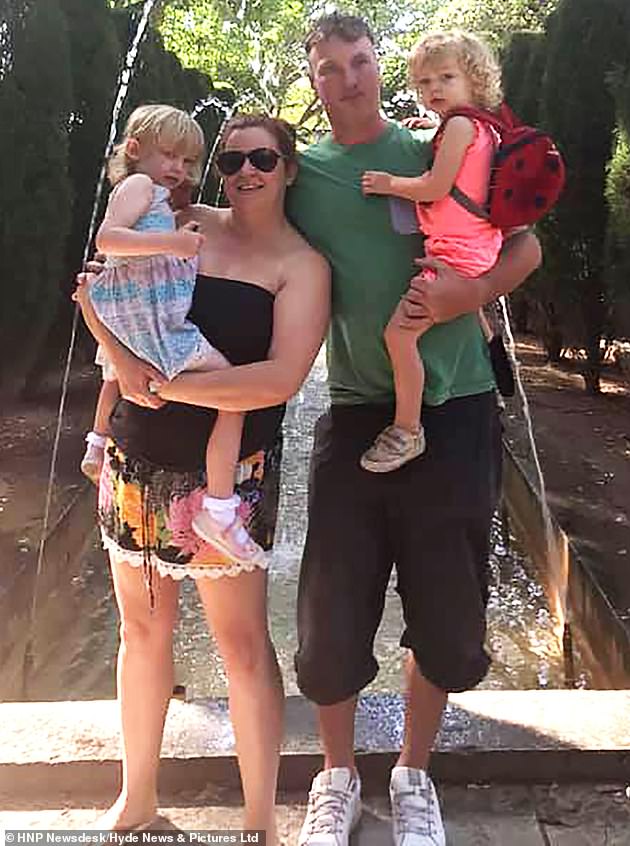 All four were found dead at the detached property in the quiet village of Woodmancote in the evening of Sunday March 29, 2020 – just a week after lockdown was imposed

Mr. Needham, a builder, is understood to have been granted a firearms certificate in 2017 and had purchased a shotgun which he kept in the house just before the attack.

The hearing was told Mr. Needham had been suffering financial problems in the run-up to the Covid lockdown in March 2020.

How do you get a gun license in the UK?

To get a firearm legally in the UK, you have to have a firearm license.

You also need one to buy ammunition.

They are issued by local police forces who need to be satisfied that you do not pose any danger to the public and do not have any previous violent convictions.

They will ask for a passport photo and a referee.

You will need two referees for a firearm license and one for a shotgun license.

These referees need to have known you for at least two years and cannot be a relative, arms dealer, or a member of the police.

The family had earlier moved into Mr. Needham’s family home in Woodmancote, West Sussex to help care for his mother, Maureen, 77, after his father Rex, who suffered from Parkinson’s disease, died in 2017.

They lived upstairs rent free while his mother lived in a ‘granny flat’ downstairs.

Mr. Needham was building an extension to the house but the family ran into financial problems and stopped contributing to the bills.

The builder was also forced to take out a loan of £20,000 from his mother to cover his family’s day-to-day living.

When Covid struck Mr. Needham found it difficult to get hold of building supplies and had to put the work extension on hold.

In a statement read to the inquest Maureen Needham said she believed they needed the money for nursery fees and day to day living.

She also entered into an equity release agreement for £180,000 to help fund the building of the extension.

In a statement to the hearing, Miss Fitzgibbons’ twin sister, Emma Ambler, said she did not believe the couple had any serious money worries.

She said: ‘I got the impression they were OK for money. They could afford nights out and nice things.’

Miss Fitzgibbons said her sister had talked about tightening their belts for a bit but did not seem unduly concerned. 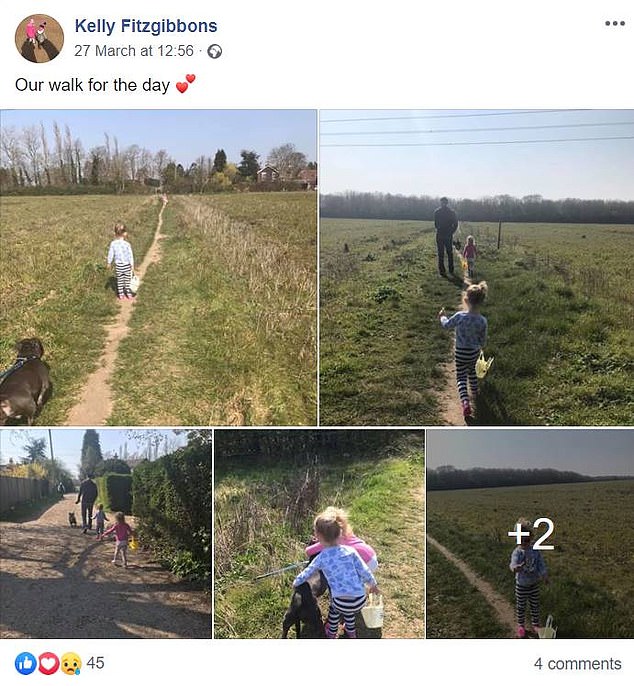 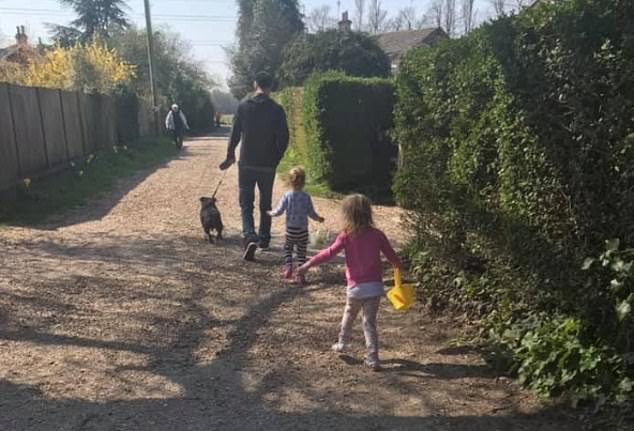 A photograph Ms. Fitzgibbons posted two days before the family was found dead

She said she did not have an answer as to why Mr. Needham shot his partner and two girls to death.

‘Rob absolutely adored the girls. Ava was a real daddy’s girl. Kelly had never told me Rob was violent towards her and the girls in any way.

The twin sister of a woman who was killed along with her two young daughters by the girls’ father has described the prospect of living without them as ‘incomprehensible’.

Kelly Fitzgibbons, 40, and Ava and Lexi Needham, aged four and two, were killed by their partner Robert Needham, 42, on March 29 2020 at their home in Woodmancote, West Sussex.

An inquest in Horsham on Tuesday heard that he killed them with a shotgun before turning the gun on himself.

A photograph of the three was put on display on the coroner’s desk while the tribute was read.

Miss Ambler wrote: ‘Kelly and I had an idyllic and happy childhood and we would spend hours playing together, making up dance routines and plays to show the family.

‘In school Kelly had lots of friends, she did well and school came easy to her.

Nobody made me laugh as much as Kelly. She was an amazing sister. She was so caring and she treated my children like her own.

‘Kelly longed for children for a number of years so she was thrilled when she fell pregnant. They were her whole world and she was so proud of those beautiful girls.

We always said we couldn’t live without each other so her loss is still incomprehensible to me and our father. We will ensure Kelly lives on because there is no way we could forget her.

‘She really was one in a million and I take comfort in the fact that she was by my side as my sister and my best friend for 40 years.’

I thought life was good for Kelly and Rob and the girls. If it was down to money difficulties it must be something Kelly didn’t know about. She was not terribly concerned about money or worried about the coronavirus situation.’

She said: ‘Ava was a beautiful, angelic little girl. She was a right chatterbox. She loved holding hands, dancing and chatting. She made many friends in school. She was a ray of sunshine and had a positive approach to school life. She was always ready with a smile on her face.

‘Lexi was cheeky. She was always either smiling or frowning. She was a little bit more confident. She had a mischievous streak in her but she loved to cuddle up. She greeted every day with love and enthusiasm. They got on well together and shared a strong bond.’

Hair sample tests showed Mr. Needham had previously been a ‘cocaine user’ and had been forced, in the past, to see a doctor over the damage the drug had caused to his nose.

The hearing was also told that in the days leading up to the killings, he had tried twice to get hold of the drug without success.

Miss Ambler said she had no idea Mr. Needham had recently bought a shotgun and kept it at the house but said her twin sister wouldn’t have told her because she would have known she wouldn’t have approved.

The bodies were found by family friend Ronald Peacock who climbed a ladder into their dorm room.

He found the two young girls lying side by side on the bed under the duvet and their mother lying on the floor. Mr. Needham was found on the landing.

Examination of the body showed Miss Fitzgibbons had injuries to her forearm and the side of her face, suggesting she had tried to defend herself as her fiancee leveled the shotgun at her and shot.

A second gunshot wound to the left side of her head would have proved fatal immediately, the hearing was told.

Both young girls had been shot at a close or point blank range and died almost immediately.

Just 48 hours before the tragedy, Miss Fitzgibbons posted a series of images online showing the whole family enjoying a lockdown walk in the sunshine.