Britons struggled to sleep last night as the country continues to see scorching temperatures amid a heat-health alert and a one in three chance of the country’s warmest day on record this week.

The Met Office issued a rare amber warning for deadly heat across most of England this Sunday when temperatures could hit 100F (38C).

The alert, which has only been issued twice before now, warns of ‘potential serious illness or danger to life’ as record-breaking temperatures are predicted to hit the country.

The UK Health Security Agency (UKHSA) may declare a national emergency with a ‘level four emergency’ if the heat becomes so extreme that ‘illness and death may occur among the fit and healthy’ as well as those more vulnerable.

Today, the mercury in central, southern and eastern England will soar again with temperatures of 87F (30C) predicted for parts of the south including London.

It comes after a tropical night with Twitter users posting memes about having trouble getting to sleep.

One user wrote: ‘Too hot to sleep with windows closed. Sleep with the windows open and wake up to a room full of flying insects. Do we ever win in this life?’

Another added: ‘The UK is not built for this weather and neither was I. (Our houses were built to withstand rain and winter and the heat is clinging to every single b*****d surface.’ 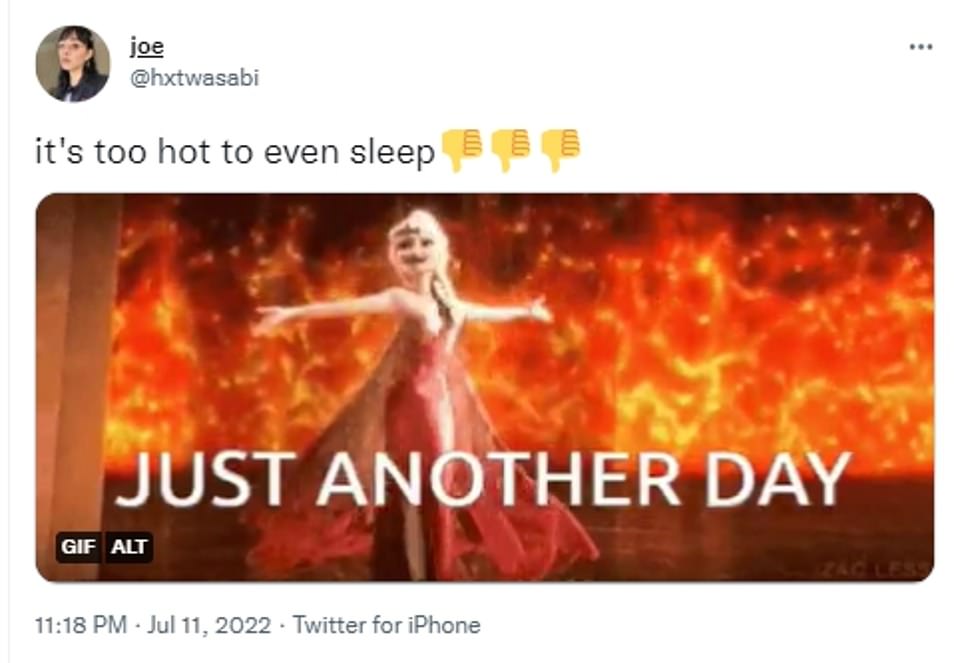 A third wrote: ‘Sending love to fellow Brits who are wide awake because it’s too hot to sleep.

‘Keep complaining. We’ll get through this one whinge at a time.’

There is a 30 percent chance that Sunday will be the hottest day ever recorded in the UK.

On Monday, the Met Office issued an amber weather warning for extreme heat across parts of the UK ahead of further soaring temperatures this week.

The rare warning states there could be a danger to life or potential serious illness as a result of the scorching temperatures.

Other issues could include road closures and delays or cancellations to rail and air travel.

The Met Office said the warning is in place from 12.01am on Sunday to 11.59pm, when temperatures are predicted to soar into the 30s.

The warmest day on record in the UK was the 38.7C scorcher recorded at Cambridge Botanic Garden in July 2019.

On Monday, Wales recorded its hottest day of the year so far as the mercury reached 28.7C in Cardiff’s Bute Park.

In England, the temperature peaked at 32C in Northolt, west London.

England’s hottest day so far this year remains the 32.7C recorded at Santon Downham, in Suffolk, on June 17.

Network Rail has warned speed restrictions are likely to be in place this week on some parts of the network most affected by the hot weather.

Fire services have urged people to have picnics instead of barbecues during the warm weather after a spate of grass fires.

The AA Driving School and RAC meanwhile said motorists should carry water with them, start their journeys earlier in the day, plan their routes and check their vehicles before setting off.

The Met Office says the mercury is predicted to rise to 30C in London, Chelmsford, in Essex, and Sudbury, in Suffolk, on Tuesday while the rest of England is expected to see temperatures soar to the late 20s.

The whole of England is largely expected to experience sunny days with some clouds over the next week to match the temperatures of mid to high 20s.

It will cool off a little on Friday, with the north-west and north-east of England predicted to have some rain with temperatures reaching highs of 19C.

Temperatures are expected to rise to 32C in Reading and London on Sunday and in excess of 35C in the southeast.

Scotland and Northern Ireland meanwhile are predicted to have a cloudier week, with rain forecast for Tuesday and Friday.

Weather forecasting models suggest it is possible – although not likely – temperatures could reach 40C in the UK next weekend.

A Level Three Heat Health Alert has also been issued by the Met Office and the UK Health Security Agency (UKHSA) from 9am on Monday to 9am on Friday in the east and south-east of England, with the rest of the nation having a level 2 alerts in place.

The four-level system highlights the potential health impacts of these high temperatures.

‘At the moment, we are looking at a 30% chance of seeing the hottest temperature recorded in the UK.’

Tuesday will see the risk of a few showers across the north of the UK and slightly lower temperatures of 19C to 25C. It will remain hot with sunny spells in the south with highs of 27C to 33C.

Wednesday, Thursday and Friday will see a mixture of sunny spells, but the risk of showers in the north too. Temperatures 20C to 23C in the north and 24C to 28C in the south. Over the weekend, it looks set to be mainly dry and sunny and temperatures could rise back into the low to mid 30Cs.’

Some even predict the UK could reach a staggering 43C (109F) this weekend.

Met Office forecaster Steven Keates told The Sun: ‘We’re in for a real rollercoaster which may take people by surprise. (This) weekend we could have some really exceptional record-breaking heat and it will ramp up suddenly like someone has turned on the gas.

Some models from America indicate we could see 43C in East Anglia next Sunday, which would obliterate the current UK record.

At the moment we’ve got quite pleasant dry heat, but next weekend the dew point will rise and it will become very hot and sticky. The high humidity means temperatures won’t drop quickly at night.’