A young boy that was born with two congenital hear defects and suffered a stroke that caused him to lose feeling in half of his body is finally recovering, and starting to live a normal life.

Max Weigel, who was four at the time, of Rockford, Michigan, around 130 miles west of Detroit, was born with atrial septal defect (ASD), a hole in the upper chamber of his heart, and left ventricular non-compaction cardiomyopathy, a condition that occurs when the left ventricle of the heart fails.

After getting a surgery to close the hole in his heart, Weigel suffered a stroke, and because of his conditions, treatment options to save him – and prevent him from permanently losing feeling in one of his body – were limited.

Doctors were able to perform life-saving treatment on the young boy, though, and now three years later he is starting to return to normal life and catch up to his peers physically. 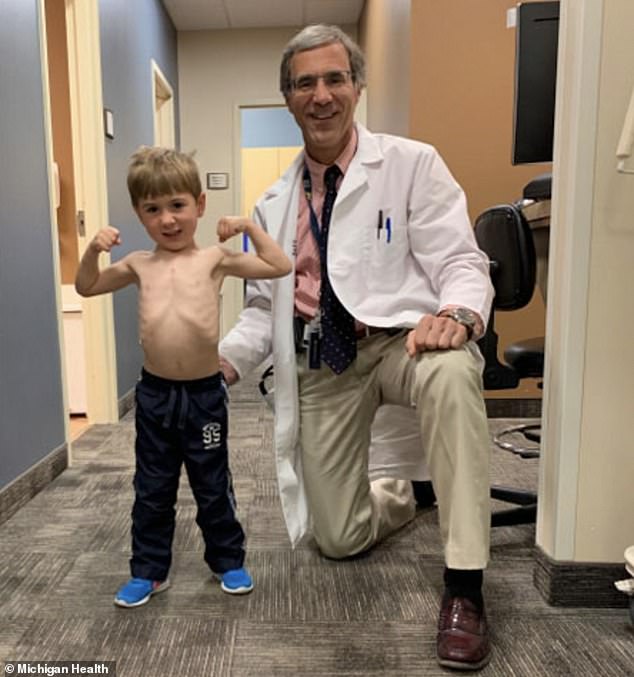 Max Weigel (left), 7, was born with two congenital heart conditions, including ASD, which is when a person has a hole between the chambers of their heart

When Weigel was four years old, a local pediatric cardiologist in nearby Grand Rapids, Michigan recommended he receive surgery to fix his ASD.

If left untreated, ASD can result in the right side of the heart growing, and becoming weaker, according to the Mayo Clinic.

It can also lead to the person suffering from high blood pressure later in like as hypertension forms in the arteries.

Weigel was referred to the University of Michigan Health CS Mott Children’s Hospital, a facility that had a specific ICU for pediatric surgeries, a decision that likely saved Max’s life, as the doctors there would be more prepared to deal with the crisis.

On April 25, 2019, doctors at Mott successfully completed the operation, stitching together the hole in the young child’s heart.

He initially reacted well to the surgery, even recovering ahead of schedule initially, leaving his parents hopeful that he could return home earlier than expected.

Two days after the operation, though, he began to act erratically.

‘I asked him what was wrong and tried to talk with him, but he didn’t answer. When he began to groan, I knew something was very wrong, ‘Noel Weigel, Max’s mother, said in a statement. 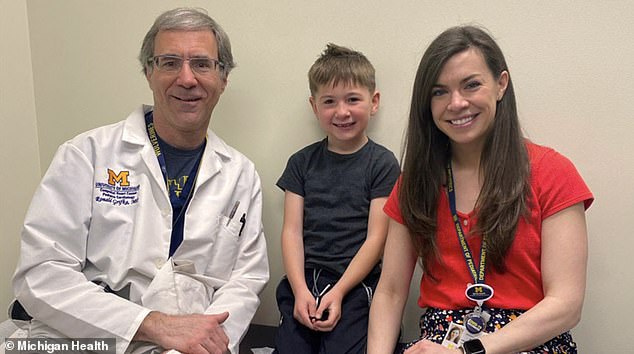 Weigel (center) initially responded well to surgery to close his heart, but suffered a stroke days later. Doctors at the University of Michigan performed an endovascular thrombectomy to remove a blood clot from his brain. He has since recovered well from the ordeal

In a moment she described as a ‘whirlwind’, she ran to get help through the hospital to get health.

Quickly, doctors and nurses flooded into the room. Soon after, her and her husband Nick Weigel learned that Max had suffered a stroke.

Atrial septal defect: The defect that leaves you with a hole in your heart

‘Max couldn’t speak and wasn’t able to feel the right side of his body,’ Max’s father said.

‘His vision was also impacted. We felt helpless when we saw the terror in his eyes. ‘

‘In Max’s case, imagining revealed that a significant portion of the left side of his brain was at risk of being irreversibly injured due to a major brain vessel being completely blocked with a clot,’ Dr Aditya Pandey, a neurosurgeon at Mott, explained.

Doctors decided that the only option for saving Weigel was an endovascular thrombectomy, a procedure where a catheter is inserted into an artery, then another devices is put through the catheter to remove the clot.

“We placed a catheter in an artery in his right leg and navigated to the left carotid artery,” Pandey said.

‘We then placed a smaller catheter to reach the clot, allowing for the stent retriever to be deployed and the clot removed. Within 24 hours he began to improve. ‘

Had this surgery not been performed, Weigel may have suffered devastating consequences.

‘Without the surgery, he would have been disabled for life,’ Pandey said.

‘We put all of our trust and faith in Dr Pandey as our son was taken in for the procedure,’ Noel Weigel said.

Max was partially paralyzed on the right side of hid body, and partially lost his ability to speak as a result of the stroke.

His family put him into physical, occupational and speech therapy after he recovered, hoping that he could still live out a normal childhood despite his affliction.

Max, now seven years old, is learning to speak again, and even became a nationally ranked BMX racer for his age group, as he lives out a normal life.