Boris Johnson arrived in Rwanda today more than 4,000 miles from the UK as the Tories brace for a double-defeat in the Wakefield and Tiverton by-elections.

The PM is in Kigali with wife Carrie for a Commonwealth meeting – and will be on tour abroad for the next week.

But there are fears the by-elections could spark a renewed Conservative revolt, if as expected the government fails to defend them both for the first time since the dying days of John Major’s time in No10.

Ministers have already been rehearsing arguments about how difficult it is for governments to hold by-elections in mid-term. But limiting the scale of the setbacks is considered critical for Mr Johnson.

Meanwhile, the premier is facing another difficult showdown on his trip, as he holds talks with Prince Charles after apparent clashes about the policy of deporting Channel migrants to Rwanda. 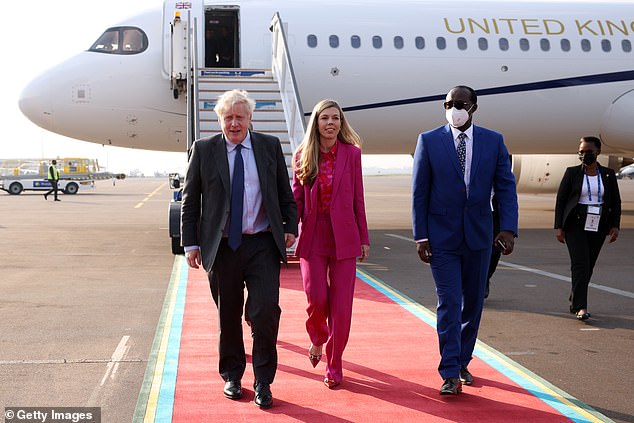 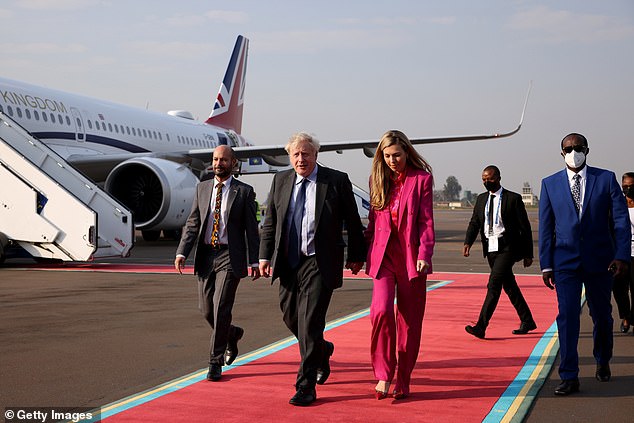 Boris is facing another difficult showdown on his trip, as he holds talks with Prince Charles after apparent clashes about the policy of deporting Channel migrants to Rwand 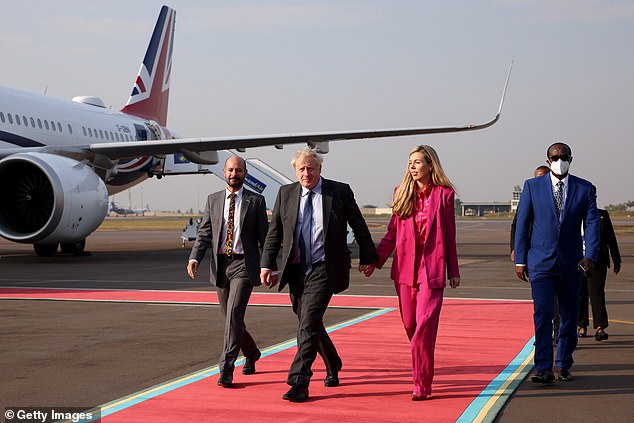 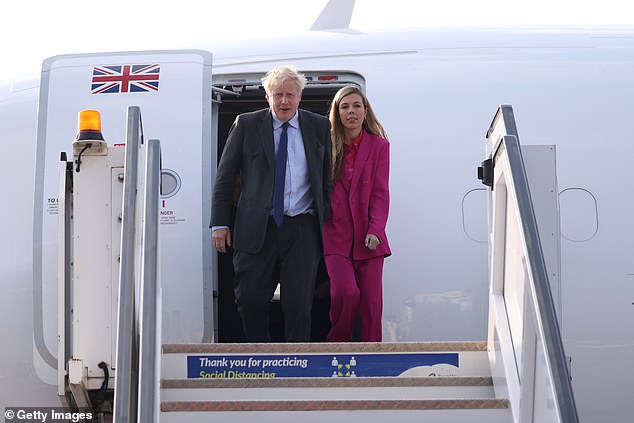 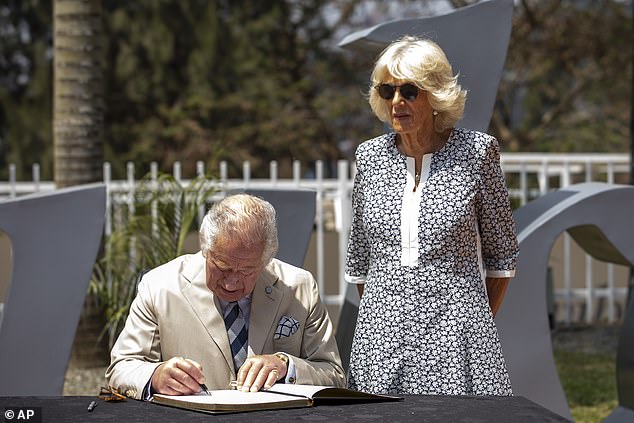 The PM is facing another difficult showdown on his trip, as he holds talks with Prince Charles (pictured with Camilla yesterday) after apparent clashes about the policy of deporting Channel migrants to Rwanda 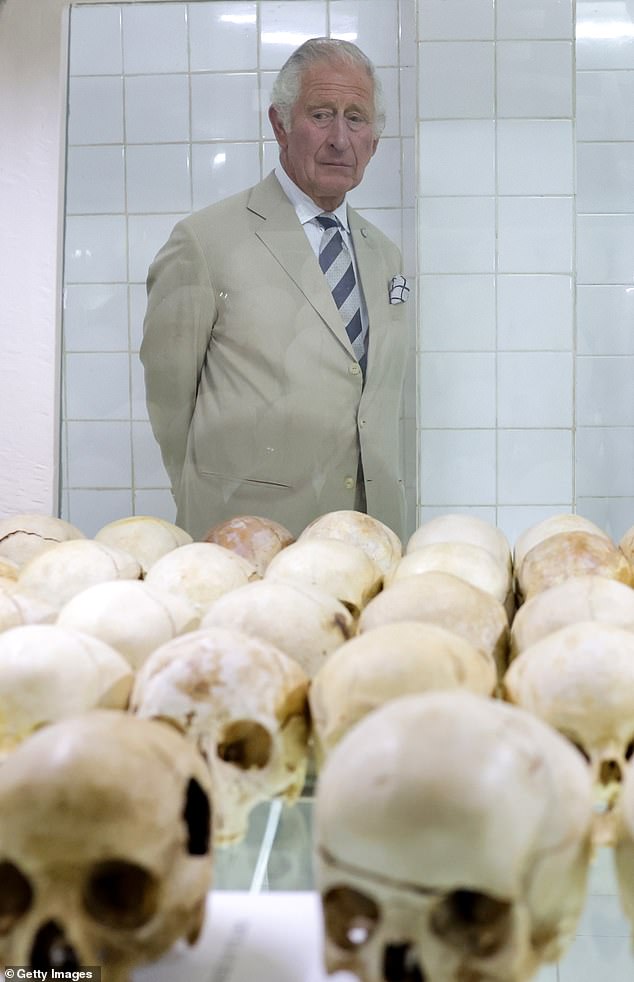 It is understood he will visit Charles (pictured in Rwanda yesterday) for a cup of tea tomorrow morning,

Mr Johnson teed up a difficult encounter before boarding the aeroplane, telling reporters critics of the scheme had a ‘condescending’ attitude.

The heir to the throne is said to have privately described the plan as ‘appalling’.

But the PM is not intending to visit the accommodation in Kigali where migrants who arrive by unauthorised means would be deported to.

It is understood he will visit Charles for a cup of tea tomorrow morning, but Mr Johnson is not eager to raise the policy of removing migrants who arrive by unauthorised means on a one-way ticket.

The meeting will be the first time they have spoken since the service for the Queen’s Platinum Jubilee and comes after the ‘appalling’ remark emerged.

Speaking as he prepared to fly to Kigali, Mr Johnson said the trip is an opportunity ‘for us all to understand for ourselves what that partnership has to offer’.

‘Let’s hope perhaps help others to shed some of their condescending attitudes to Rwanda and how that partnership might work,’ he added.

Asked if he will tell the prince he is wrong, Mr Johnson said: ‘I have no evidence for the assertion you’ve just made about the prince’s comments. I can’t confirm that.

‘What I can say is that the policy is sensible, measured and a plan to deal with the grotesque abuse of innocent people crossing the Channel.’

He insisted he is ‘looking forward very much to seeing’ Charles, but would not say whether he would be raising the policy with him.

Despite it being Mr Johnson’s first visit to the nation during his time in No 10, he is not planning to visit any of the accommodation earmarked for the scheme.

‘You will know that the Prime Minister’s time is always limited and to make time to do that he would therefore have to leave elements of the program whereby he’s working with a unique set of world leaders on quite crucial issues,’ his spokesman said.

‘We think that the best use of his time for this short period he’s in Rwanda is to dedicate himself to some of the issues that will be raised at the summit and to work with other world leaders on some of those issues we’ve talked about , not least Ukraine and global security. ‘ 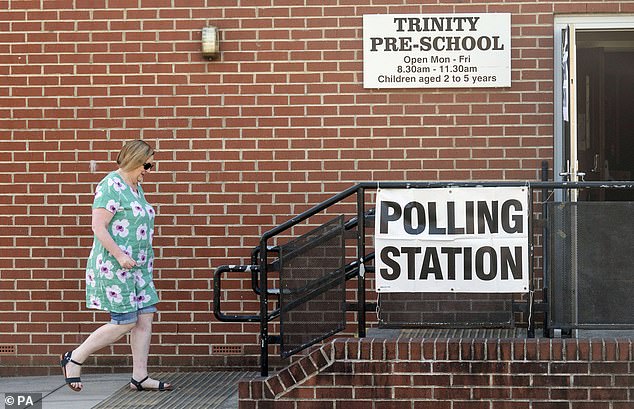 A polling station in Wakefield, where one of the by-elections is being held today

The first flight removing people to Rwanda was due to take off last week, but was grounded by successful legal challenges ahead of a full hearing on the scheme’s legality in UK courts.

The policy is one element of a £ 120million economic deal with Kigali, but has been widely criticized in part because of concerns about Rwanda’s human rights record.

Mr Johnson noted that he would be arriving there before any asylum seekers despite the agreement being signed two months ago.

‘I’m conscious that I’m arriving before anybody who has traveled illegally across the Channel, I can’t conceal that fact from you – there it is – but it is still the case that no UK court and no international court has ruled our plan unlawful, ‘he said.