Beyonce has marked her return to showbusiness with an iconic British Vogue photoshoot.

The superstar, 40, who released her last album Lemonade in 2016, wore an incredible gold metallic hooded dress which had a plunging neckline and showed off her incredible curves.

Sporting a short jagged front, she wore a giant statement Saturn earrings as she sat in front of a red backdrop alongside the theme: ‘Beyonce turns up the heat.’ 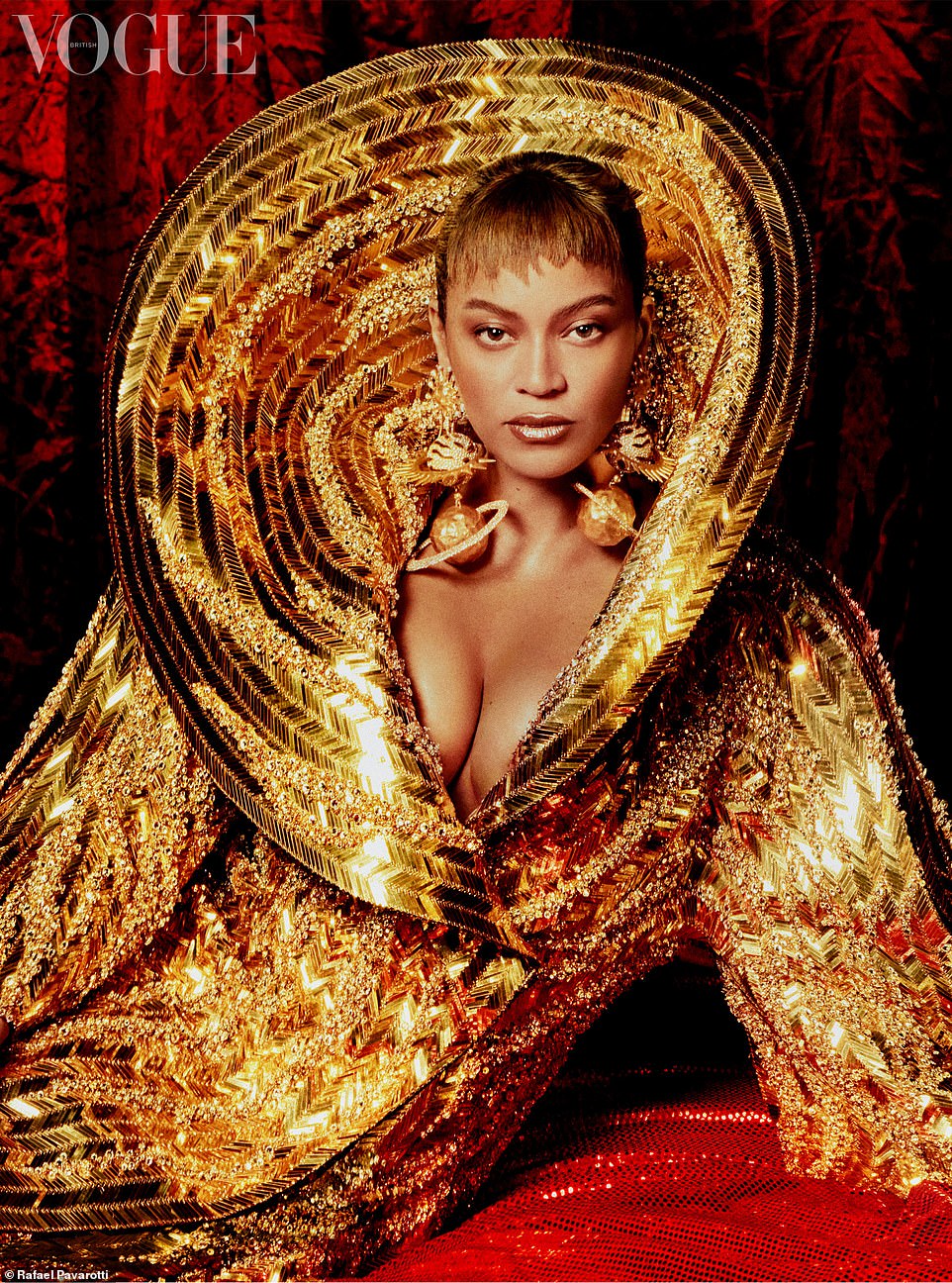 Beyonce is BACK! ‘Evolving’ Superstar wore a revealing gold hooded gown as she marks her return to showbiz following six-year hiatus for iconic British Vogue photoshoot 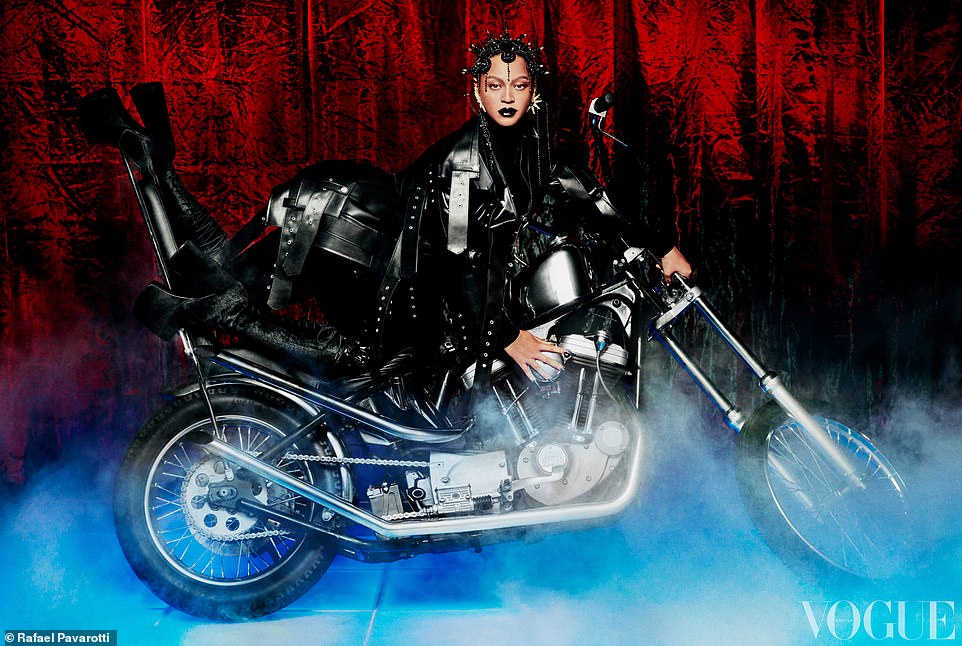 Hear her roar! She slipped into a leather ensemble to ride a motorbike ahead of her seventh album release, Renaissance

The publication reports that Beyonce is poised for her next evolution, one that promises vision, grace – and something extra.

Editor in Chief Edward Enninful styles and meets the superstar, revealing: ‘New music is coming – a thrilling abundance of it.’

A second image saw Beyonce wearing leather and chunky platforms boots as she lay across a motorbike, while sporting black lipstick amid a smokey backdrop.

The mother-of-three then sat atop a horse for the cover image wearing a skintight black dress and giant headpiece.

Sharing the cover image on Twitter, Enninful wrote: ‘@Beyonce is poised for her next evolution, one that promises vision, grace – and something a little bit extra… In the July 2022 issue of British Vogue.’ 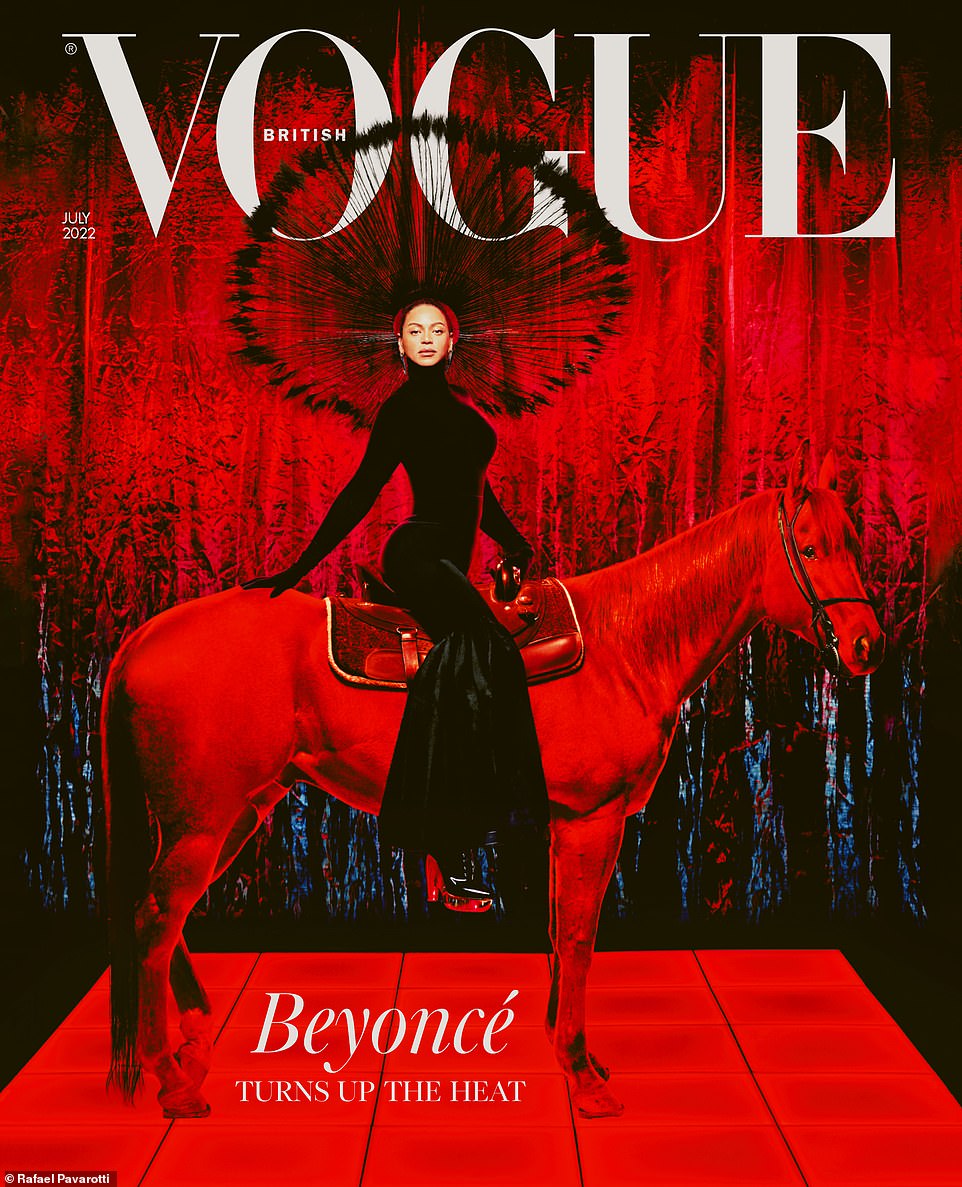 Riding around: She sat atop a horse wearing a black skintight dress and a mega headpiece as she literally ‘turned up the heat’ for the cover

She even hinted at the name of the new album last year.

The Be Alive songstress said in her Harper’s Bazaar cover story that her new album would represent a ‘renaissance’ a year ago, after the world spent time in lockdown.

She said: ‘With all the isolation and injustice over the past year, I think we are all ready to escape, travel, love, and laugh again.

‘I feel a renaissance emerging, and I want to be part of nurturing that escape in any way possible.’ 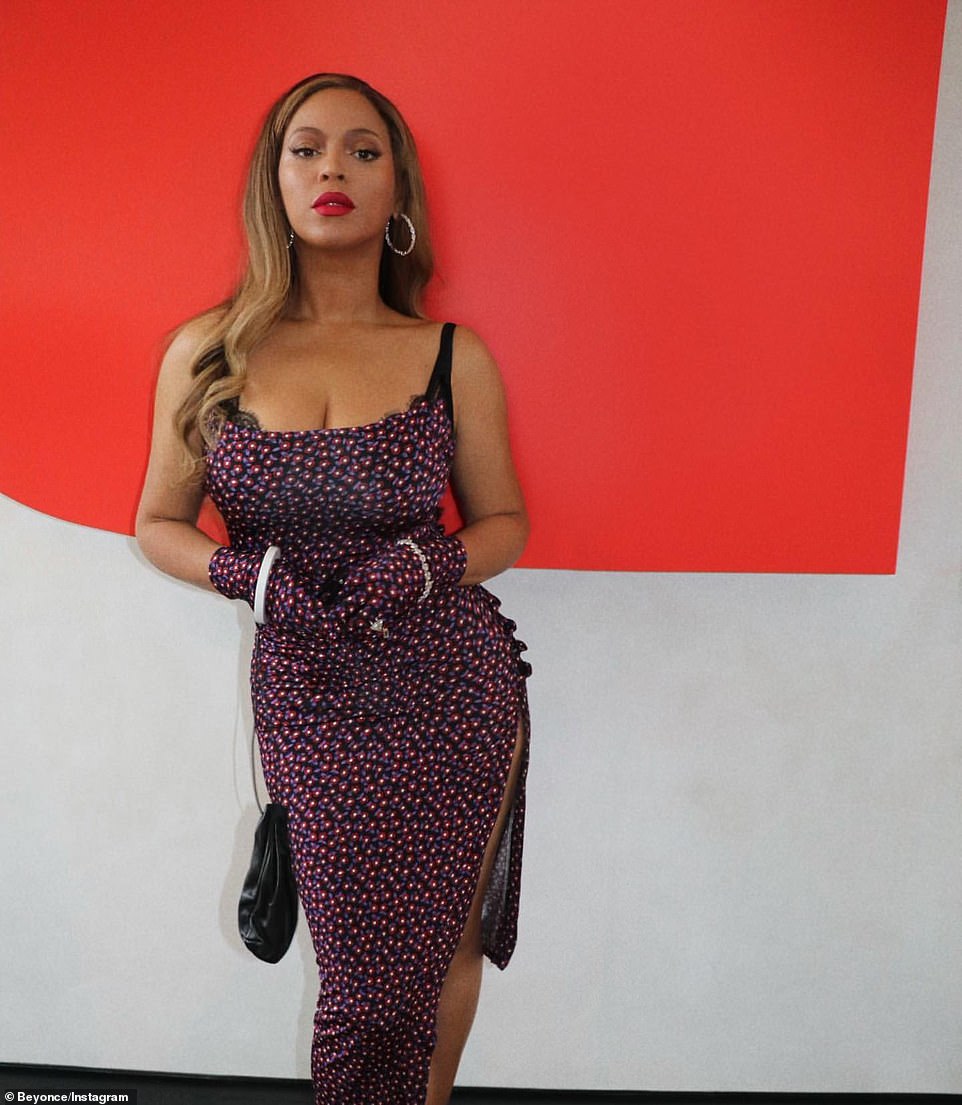 ‘We are all ready to escape, travel, love and laugh again’: Beyonce surprised fans by announcing she will release new album Renaissance on July 29… and fans have gone wild 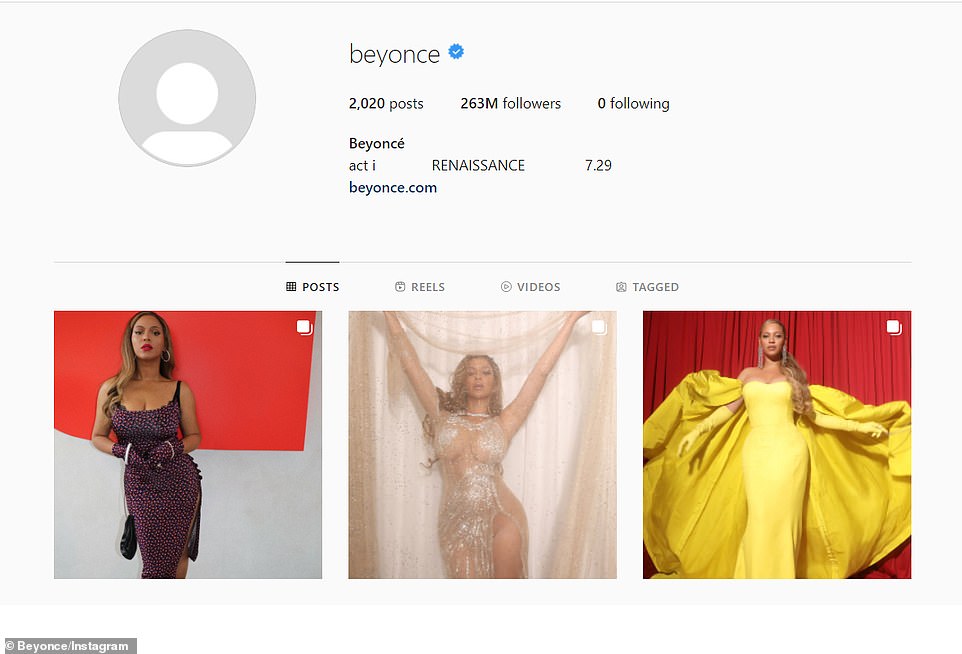 Images to be revealed at a future date! Beyoncé fans can now pre-order the four $ 39.99 Renaissance box sets, which come in different mystery ‘poses’ and include a T-shirt, CD, 28-page booklet, and mini-poster 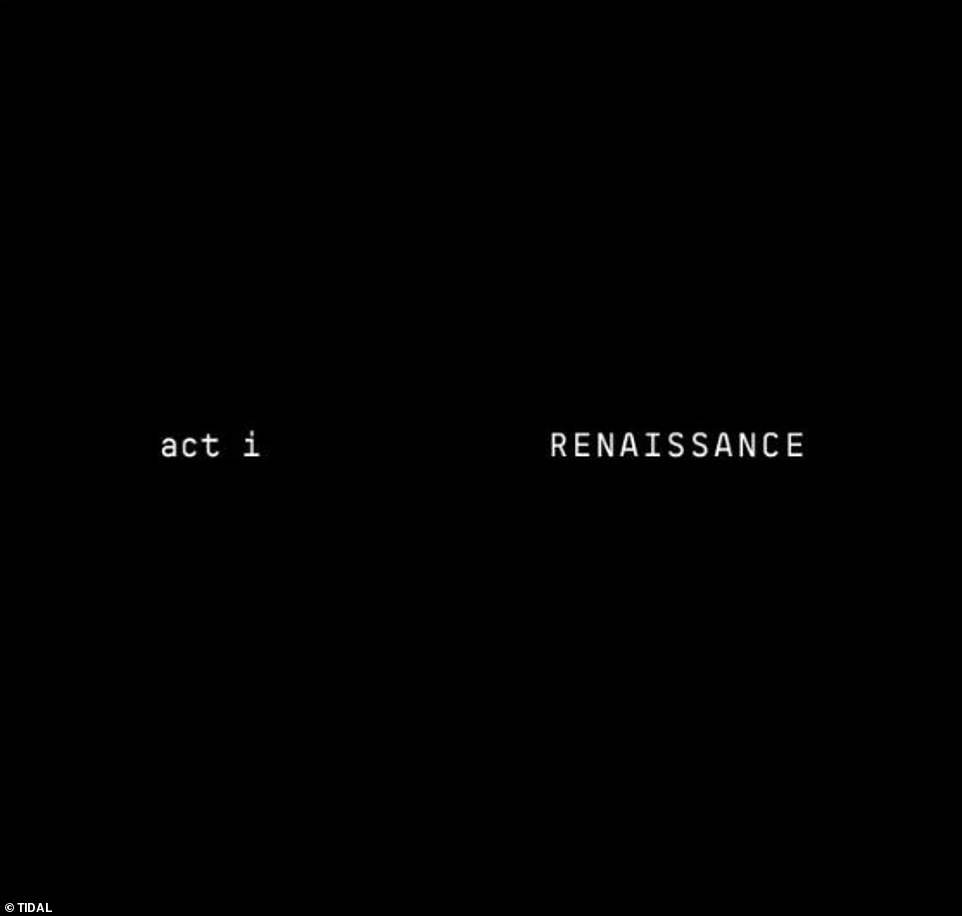 Dropping hints: Knowles-Carter first hinted that the follow-up to her hit 2016 visual album Lemonade would represent a ‘renaissance’ last August

‘I’ve been in the studio for a year and a half. Sometimes it takes a year for me to personally search through thousands of sounds to find just the right kick or snare. One chorus can have up to 200 stacked harmonies.

‘Still, there’s nothing like the amount of love, passion, and healing that I feel in the recording studio. After 31 years, it feels just as exciting as it did when I was nine years old. Yes, the music is coming! ‘

Beyoncé added: ‘I have paid my dues and followed every rule for decades, so now I can break the rules that need to be broken. My wish for the future is to continue to do everything everyone thinks I can’t do. ‘

American fans can now pre-order the four $ 39.99 Renaissance box sets, which come in different mystery ‘poses’ and include a T-shirt, CD, 28-page booklet, and mini-poster.

There are going to be 16 tracks featured on the new album.

On Tuesday, The Sun reported that the Houston-born Texan’s team has already been ‘scouting venues’ in the UK for ‘live experiences, intimate shows, and other pop-up performances.’ 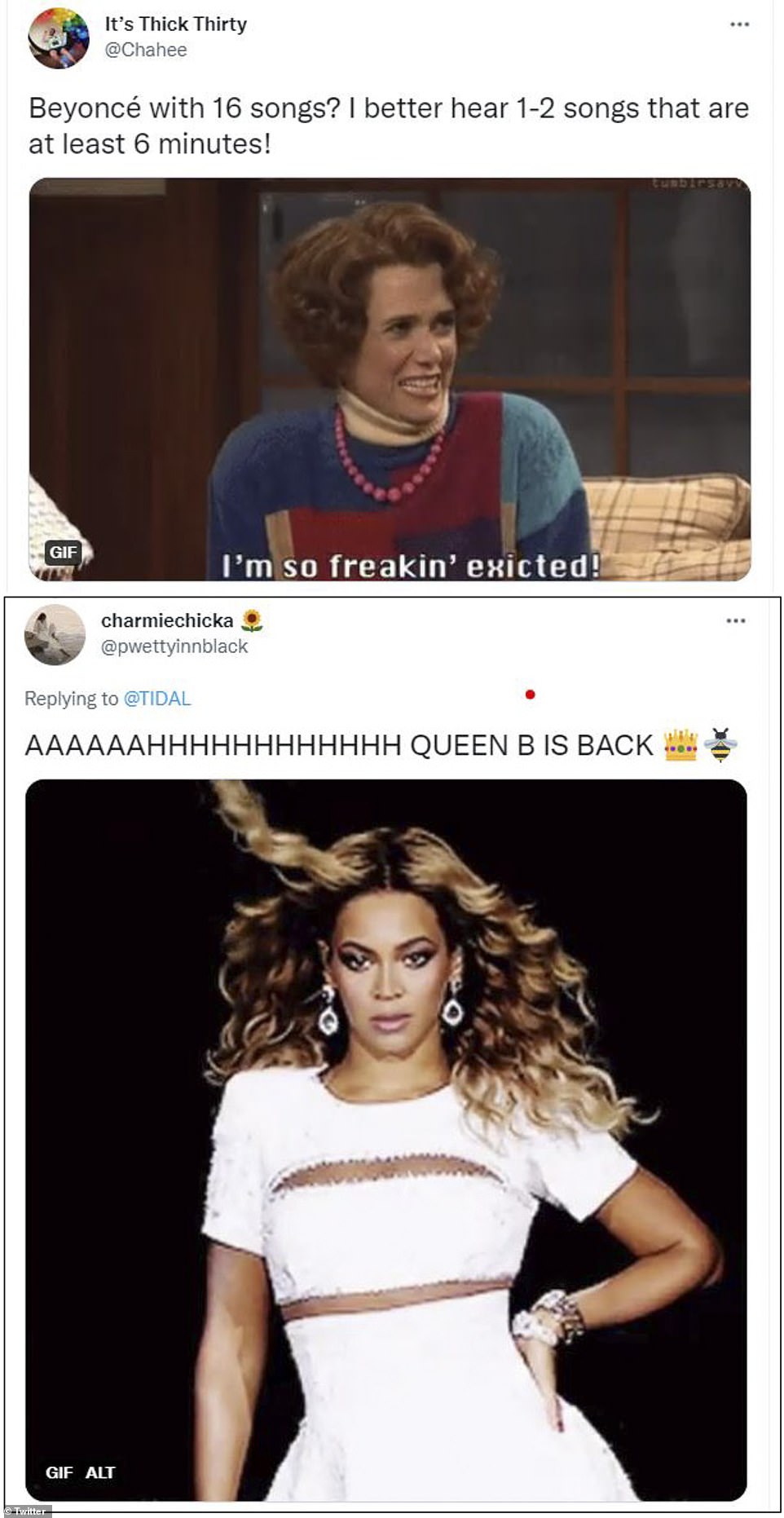 ‘Queen B is back!’ Knowles-Carter’s fans understandably went wild on Twitter, posting funny memes that best illustrated their excitement over Renaissance

They took to Twitter in their droves and wrote: ‘Beyonce with 16 songs? I better hear 1-2 songs that are at least 6 minutes. ‘

‘Aaaaaaaaaaaah Queen B is back.’

Jay-Z wasn’t immune from having an embarrassing dad moment as he left his daughter cringing in San Francisco on Monday.

The adorable moment left viewers in hysterics as they quipped the youngster was the only one who could keep her superstar parents ‘humble.’

In the adorable clip, the rapper looked every inch the doting dad as he pulled Blue towards him for a cuddle and a kiss on the cheek, yet the preteen seemed a tad sheepish as she pulled away and laughed.

Journalist Philip Lewis shared a clip of the exchange, writing, ‘To us: Jay Z, the all time rap legend; To Blue Ivy: embarrassing dad. ‘ 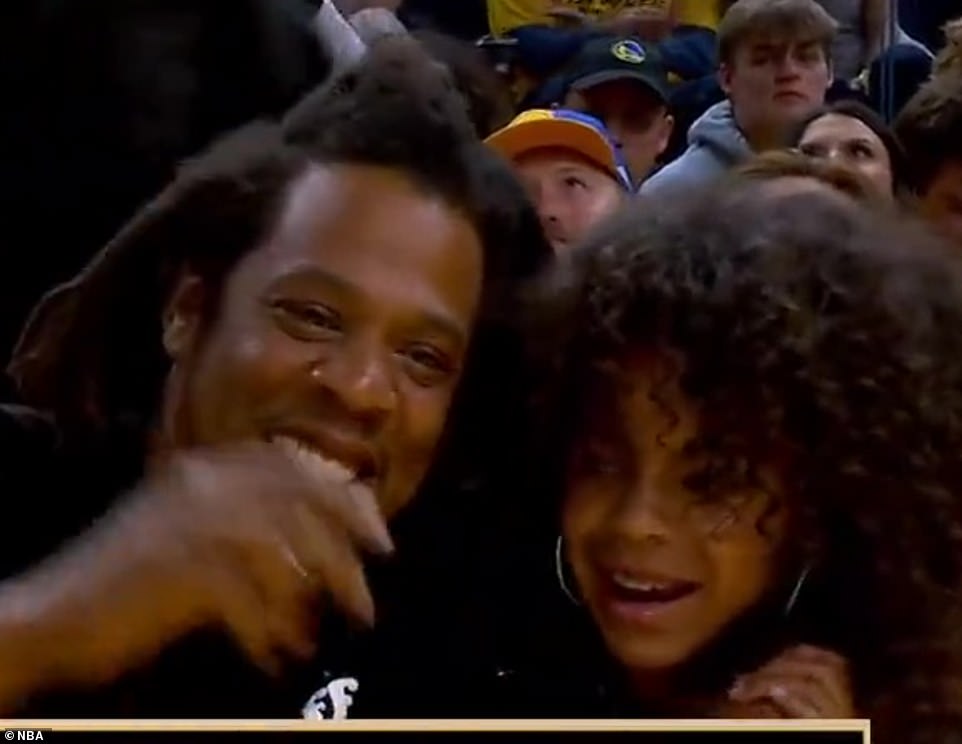 Hilarious: Jay Z, 52, wasn’t immune from having an embarrassing dad moment as he left daughter Blue Ivy, 10, cringing at the NBA Finals game in San Francisco on Monday

Twitter users were quick to respond: ‘if it’s one thing blue is gonna do, it’s humble here parents’; ‘She has keep her clients in check. Legendary honestly. ‘; ‘She’s not embarrassed. She said exactly what my daughter would say to her dad. “Dad! My haiiiirrrr! ”

‘Her parents are the most famous people in the world but she gotta keep them humble’; ‘She’s got Beyoncé’s attitude and facial expressions and I love it!’; ‘That’s the first thought that came to my mind… .that’s Bey’s mannerisms’;

‘Haha she is so embarrassed’; ‘The way she keeps a straight face the whole time’; ‘Did she just say “dad, my hair”? I might just be obsessed with her ‘; ‘Blue Ivy is only 10 and she’s already cooler than I’ve ever been [sic]. ‘

The father-daughter duo had courtside seats as they watched the Golden State Warriors defeat the Boston Celtics, 104-94, at the Chase Center to take a 3-2 series lead. Golden State can clinch the team’s seventh NBA title with a win in Boston on Thursday. 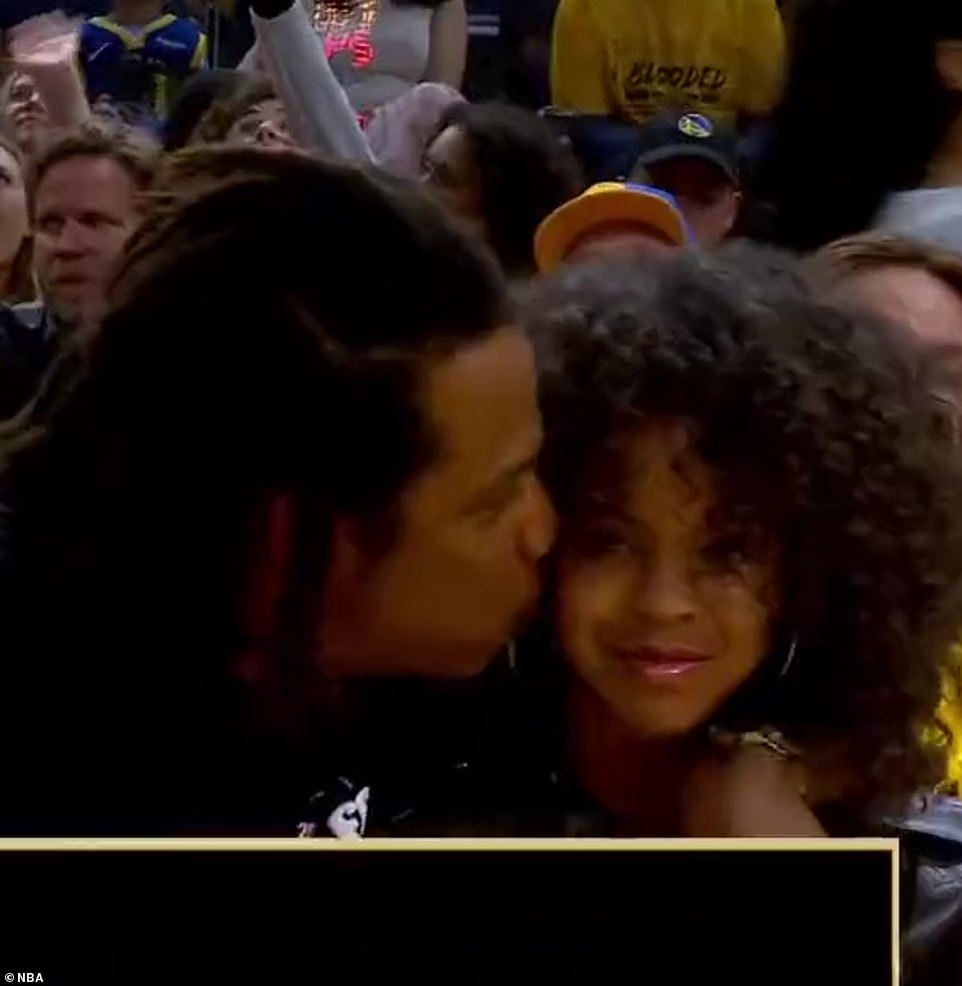 Hilarious: the rapper looked every inch the doting dad as he pulled Blue towards him for a cuddle and a kiss on the cheek, yet the preteen seemed a tad sheepish as she pulled away