Federal cops are trying to get their hands on millions of dollars in assets once owned by a private schoolboy turned drug smuggler who died in prison while awaiting trial.

Among the belongings the AFP wants to seize are a property portfolio in Sydney and Brisbane valued at more than $ 2million and a Mercedes-Benz worth almost $ 125,000.

Sydney Grammar graduate Bennet Schwartz, 34, was in custody at Silverwater’s Metropolitan Remand and Reception Center in western Sydney when he was found dead on February 19.

Schwartz, who had previously served a prison sentence for importing a commercial quantity of drugs, was facing trial over an alleged plot to smuggle 27kg of cocaine into Australia. 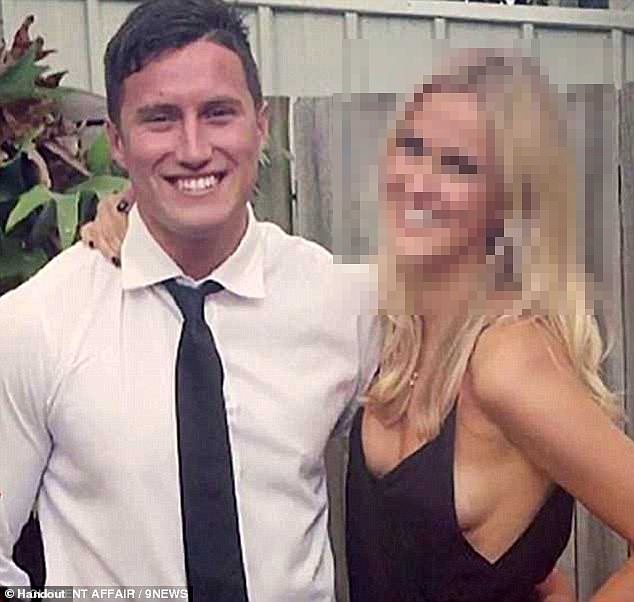 Australian Federal Police want to seize assets worth millions of dollars from the estate of convicted cocaine smuggler and former Rio Tinto employee Bennet Schwartz, who was found dead in his prison cell in February. Schwartz was awaiting trial on fresh drug charges 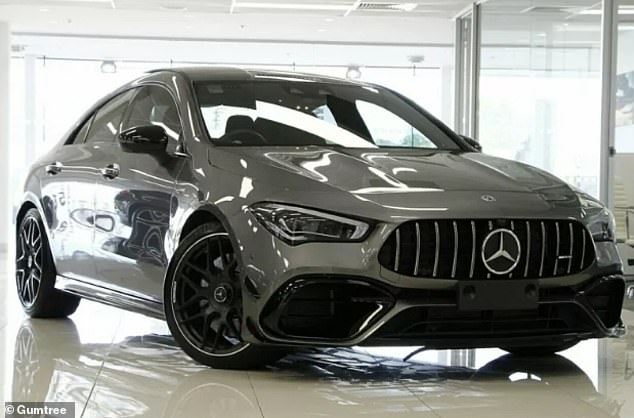 Among the property the AFP wants to seize is a property portfolio in Sydney valued at more than $ 2million and Brisbane and a Mercedes-Benz worth almost $ 125,000.

The AFP had informed Bennet it intended seizing his wealth while he was alive and is now pursuing his estate to recover what the agency says are proceeds of crime.

One of the assets listed in court documents is an art deco apartment on the top floor of a block at Rushcutters Bay in Sydney’s east with an estimated value of $ 1.07million.

Another is a $ 885,000 three-bedroom apartment in Brisbane’s riverside New Farm. A third is a $ 655,000 apartment within the boutique Hermitage development in the same suburb.

Also in the AFP’s sights is a gray 2020 Mercedes-Benz CLA-Class coupe which once had B25 numberplates and is being offered for sale by a Sydney car dealer for $ 124,990.

Several bank accounts held with Suncorp-Metway and NAB are part of the action, along with shares in Firefinch Ltd, Boab Metals Ltd and Silver Lake Resources Ltd.

All the real estate, now worth a combined estimate of $ 2,610,000, was bought before Schwartz was arrested over a 2016 cocaine importation. 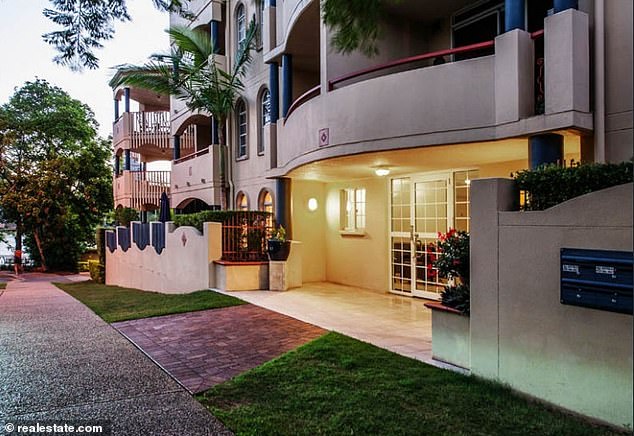 Schwartz bought an apartment in the boutique Hermitage development (above) on Griffith Street, New Farm, in Brisbane for $ 465,000 in 2015. The property is now worth an estimated $ 655,000 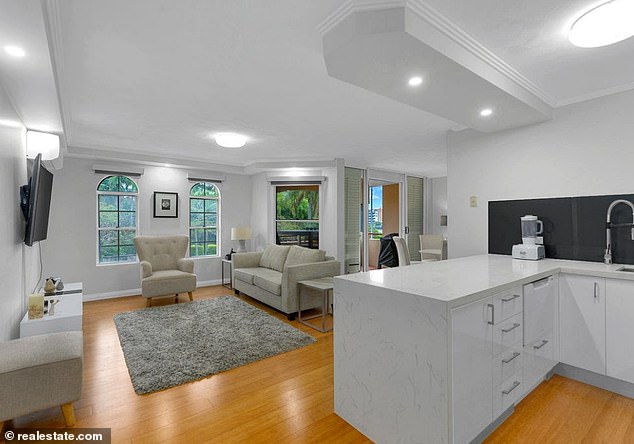 All the real estate, now worth a combined estimate of $ 2,610,000, was bought before Schwartz was arrested over a 2016 cocaine importation. The Hermitage apartment is pictured

Schwartz’s assets at the time of his death are listed in a summons filed in the New South Wales Supreme Court by the AFP against his estate.

The AFP’s civil claim seeks orders that the property be put in the ‘custody and care’ of the Official Trustee and not be disposed of by any third party before being forfeited to the Commonwealth.

Schwartz had been diagnosed with post traumatic stress disorder and was suffering severe anxiety but did not see a psychiatrist or receive appropriate medication during his last stint in jail.

After four months in custody, and two days after his first brief visit from a psychologist, Schwartz made a last-ditch bail application in the Supreme Court on February 18.

Bail was refused and the next morning Schwartz was found dead in his cell. 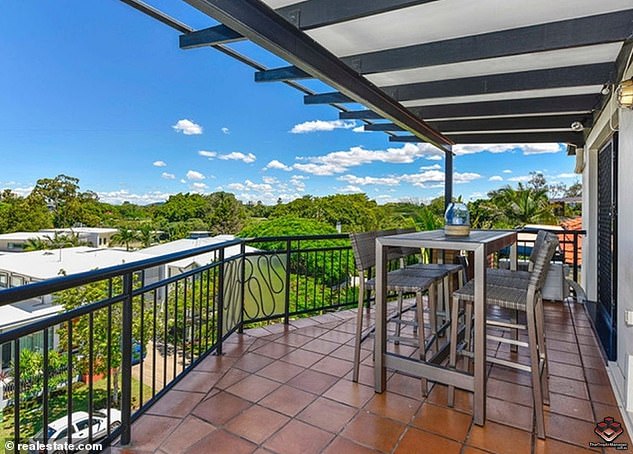 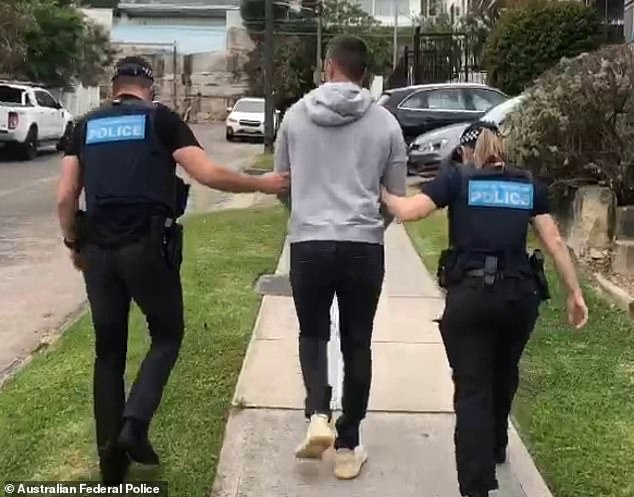 Bennett Schwartz is pictured being arrested outside his Rose Bay home in October last year. He was accused of smuggling 27kg of cocaine before his death in prison on February 19

‘Bennet died an innocent man,’ Mr Harb said. ‘Bennet indicated a not guilty plea to all counts before the court.’

In 2016, Australian Federal Police and Border Force officers intercepted 25kg of cocaine worth $ 4.5million imported from the United States which they linked to Schwartz.

The Sydney Grammar graduate had used an encrypted Blackberry device to communicate about the drug importation with associates including a criminal known as Dr Octopus.

NSW District Court Judge Peter Berman sentenced Schwartz to a maximum six years with a non-parole period of three and a half years in April 2018.

‘Many offenders coming for sentence to this court have terrible backgrounds,’ Judge Berman said. 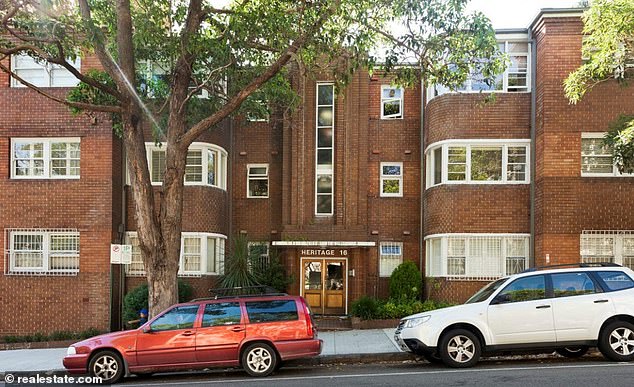 One of the assets listed in court documents is an art deco apartment on the top floor of a block at Rushcutters Bay in Sydney’s east with an estimated value of $ 1.07million

‘They are raised by parents who model illegal behavior. They are abused, they do not have guidance and they associate with criminals.

‘The offender has no excuse whatsoever for his behavior.

‘He was raised by his widowed mother in an appropriate way. She made sacrifices to give him a good education, he studied, he had a job and the support of his family. ‘

Court documents from the 2018 show Schwartz had been targeted in prison during his first time in custody, with other inmates wrongly accusing him of being a police informant.

He was the victim of several attacks, including one involving a sandwich press.

The onetime capital projects analyst with Rito Tinto had also been the victim of extortion attempts and was released in March 2020.

He was arrested at his home at Rose Bay in Sydney’s eastern suburbs last October over another drug importation scheme, this time importing 27kg of cocaine into Australia. The drugs were allegedly concealed in modeling clay.

Schwartz was charged after police seized three separate consignments of four, nine and 14 kilograms of cocaine, originating from the United Kingdom and Greece.

AFP Superintendent Matthew Parsons said at the time police would claim Schwartz had used commercial tracking platforms to monitor the drugs coming in from overseas.

‘He’s a successful qualified young gentleman with links to the mining industry and hospitality industry but obviously he’s chosen this road, be it for the fame and fortune of the gangster lifestyle,’ Superintendent Parsons said.

Schwartz was diagnosed with post traumatic stress disorder after his first stint in jail. 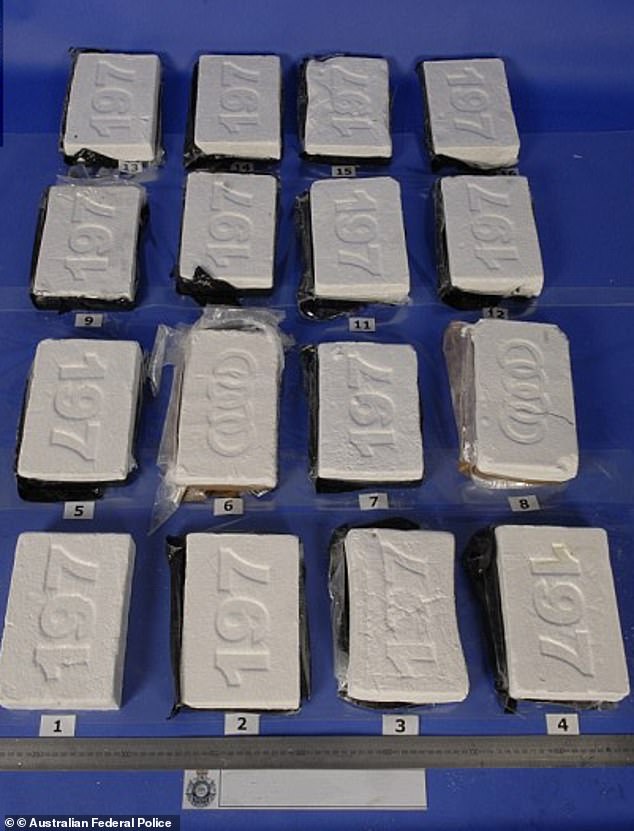 In 2016, Australian Federal Police and Border Force officers intercepted 25kg of cocaine worth $ 4.5million imported from the United States and linked to Schwartz. The drug haul is pictured

A California-based lawyer sent Daily Mail Australia a letter in May 2020 stating Schwartz’s first time in custody had ruined his life.

‘He has had no previous or subsequent involvement with the criminal justice system and has been unable to secure gainful employment.’

Schwartz’s death will be the subject of a coronial inquest. The case against his estate is back in court later this month.