Baz Luhrmann’s Elvis movie is getting film critics all shook up as it has garnered mixed reviews upon release, with some slamming the film as a ‘shameless comic-book biopic’ while others have been left singing praise for lead star Austin Butler.

Not exactly known for his subtlety as a filmmaker, Luhrmann’s extravagant approach to the King of Rock and Roll’s life has left many critics complaining that its 159-minute runtime feels as bloated as Elvis himself was in his later years.

However, Butler – who plays the titular role – has been hailed in many of the write-ups, even the bad, as being a ‘sensation’ who manages to convince playing The King in every stage of his life, from a teen up until his untimely death at the age of 42 in 1977.

Meanwhile, Tom Hanks has received slightly less than sturdy praise playing Elvis’ vilified money-grabbing manager Colonel Tom Parker, who pocketed up to half of Elvis’s income and is said to have ruthlessly controlled his life. 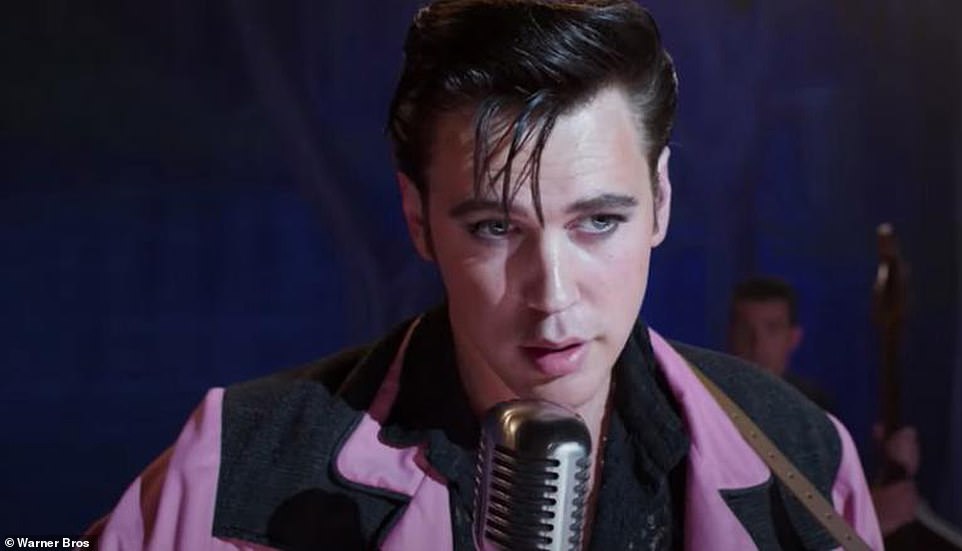 Don’t Be Cruel! Baz Luhrmann’s Elvis movie gets VERY mixed reviews calling it a ‘shameless comic-book biopic’ with a ‘campy’ turn from Tom Hanks… but Austin Butler is hailed as an ‘electrifying star’

In one of the more disparaging reviews, film critic Armond White for the National Review calls the movie a ‘shameless comic-book biopic’ writing that ‘Luhrmann’s style jumps from one exaggeration to another, zipping through poor-white class issues, past the European -based Army stint and the legendary acquisitive status. ‘

In a review for Empire Magazine, Olly Richards writes that Luhrmann ‘races through the life of Elvis Presley’ calling it ‘one hell of a ride, but sometimes it’s moving too fast for his audience to get more than a passing look at his characters. ‘

Richards adds: ‘Trying to squeeze in so much, even over a 159-minute running time, it’s not surprising that much of it feels rushed.’

But lead star Butler once again is cited as a saving grace, with the film critic stating: ‘Austin Butler is sensational as Presley. He convinces at every age, from teen to 42. ‘ 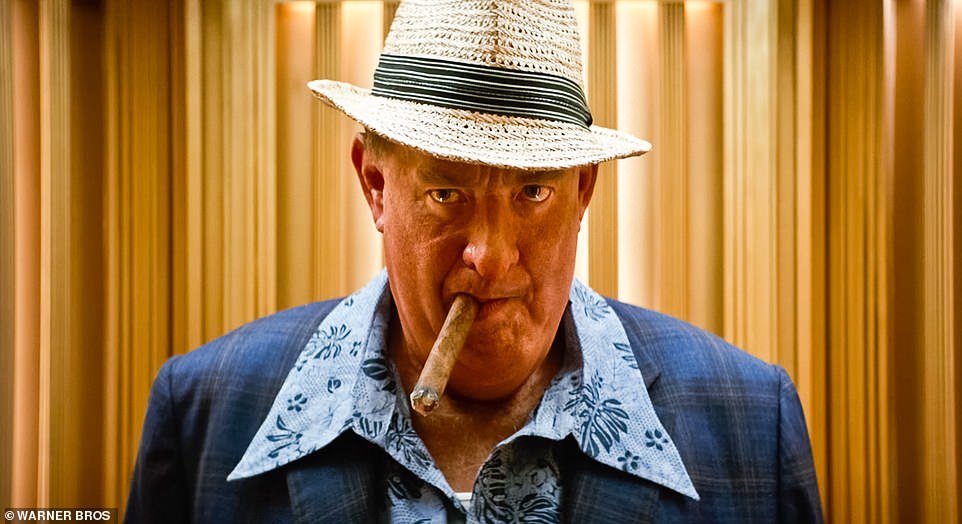 Kyle Smith for the Wall Street Journal criticizes Luhrmann’s famously bombastic filmmaking style, writing: ‘The editing is like a kaleidoscope fed through a food processor, the camera has less ability to sit still than a 4-year-old stuffed with birthday cake, and both lead actors veer into camp. ‘

‘As “Colonel” Tom Parker, Presley’s sleazy manager, Tom Hanks looks like he’s playing the Penguin in a Batman movie and is so loathsome that it’s uncomfortable that anyone would allow him to manage a Woolworth’s, let alone a superstar.’ 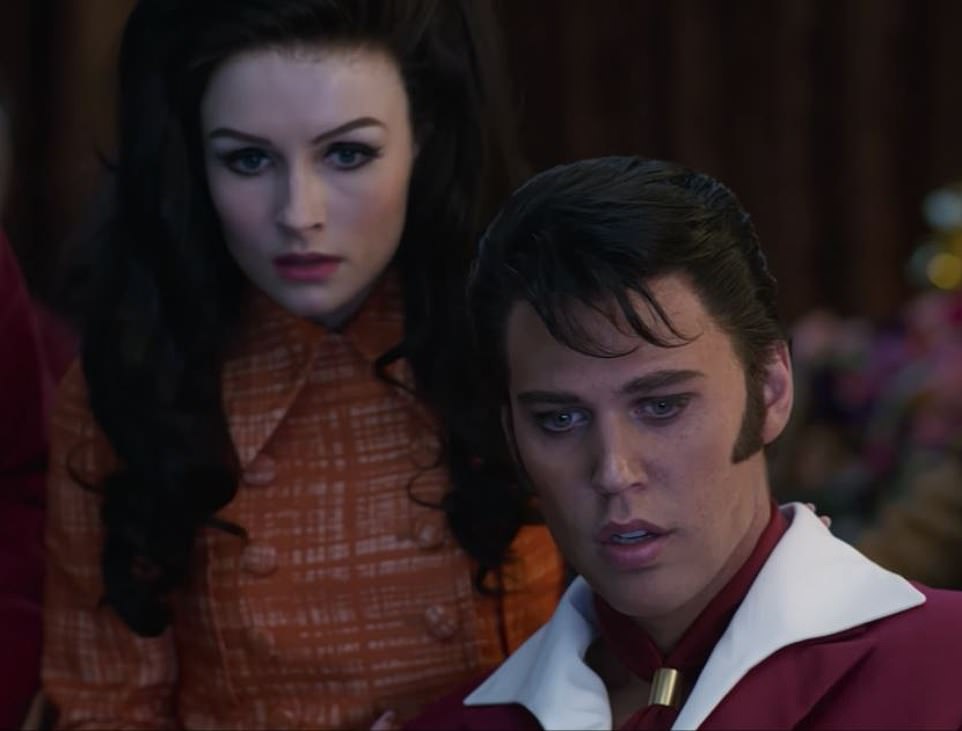 Reactions: While some film critics have been unimpressed, Priscilla Presley said that Olivia DeJonge – who plays Priscilla – came across as ‘sensitive and caring’ in the movie (pictured), adding that she was ‘pleasantly surprised’ by the flick 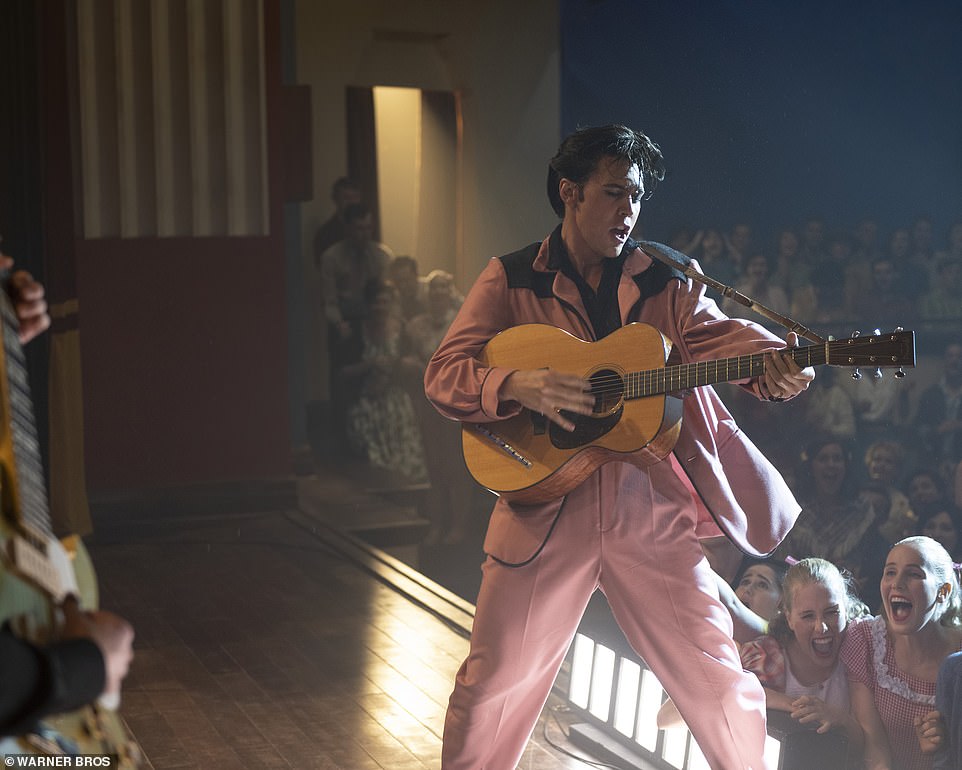 ‘These aren’t portrayals; they’re caricatures. Long before the song is performed, I shared the sentiment of “Suspicious Minds” – “Caught in a trap, I can’t walk out. ‘

‘Nothing puts Butler in the shade, not even the glittering brilliance of the costumes and production design by Catherine Martin, Luhrmann’s wife,’ Travers enthuses, adding that he ‘seizes the role of his career in “Elvis” and rides it to glory. ‘

He went on: ‘Baz Luhrmann’s bejeweled battering ram of a biopic is all over the place, which can be distracting, but the grit and grace of Austin Butler’s performance as The King is a thing of beauty. A star is born right here. ‘

Though Travers, like others, was left unimpressed with Hanks, writing: ‘Hanks, in a fat suit, facial padding and an accent Parker tried to pass off as Southern, gives his all to a role that the script sadly fails to develop.’

Pelvis paranoia: Elvis – played by Once Upon a Time in Hollywood actor Austin Butler – got into hot water in the early 1950s for his so-called scandalous hip-shaking performances

Transformed with prosthetics: Watching from the wings is Colonel Tom Parker – played by two-time Oscar winner Tom Hanks – whom Presley signed a contract with in January 1955 and he went on to manage him for over two decades

Gripping: In one scene, the sex symbol is hauled away in a police car, as Parker says: ‘In that moment, Elvis the man was sacrificed, and Elvis the god was born. He had no idea what he had done ‘

Colonel Tom Parker – born Andreas van Kuijk – was an irrepressible, manipulative showman who managed Elvis from 1956 until his death in 1977, and Kristy Puchko writes for Mashable that Hanks leads audiences down a ‘dark and confounding path’ in the role.

Puchko describes Hanks’ voiceover in the movie as’ grating ‘and calls him’ insufferable ‘as Elvis’s unreliable narrator.

She writes: ‘Hanks’s folksy charms are swallowed by a clumsy fat suit, prosthetic jowls, and a dizzyingly marble-mouthed accent.’

‘The actual Colonel sounded nothing like what Hanks is doing here, making this bouncy collision of – let’s say Southern American and Dutch – all the more inexplicable.’

Grew up in the church: Presley was controversial precisely because he commercialized what was called ‘colored music’ but, in today’s woke light, would be considered cultural appropriation

‘Tomorrow, all of America will be talking about my boy’: This translated into sky-high ratings for NBC’s Milton Berle Show, which booked the three-time Grammy winner for his first nationally broadcast TV appearances

Gladys reassures her son: ‘The way you sing is God given, so there can’t be anything wrong with it’

She concludes of her performance: ‘Worse yet, Hanks plays the part as cartoonishly villainous, always lurking, lying, and leering. Beyond being an eyesore of performance, it makes Elvis seem an absolute rube. ‘

Still, the film holds a curiously fresh 80% on review aggregator Rotten Tomatoes, signifying the reaction as has been much more positive.

Anthony Lane of the New Yorker wrote: ‘Presleyologists will learn nothing here, and purists will find plenty against which to rail. Less knowing viewers, however, may well be sucked in by Luhrmann’s lively telling of the tale. ‘

Film critic Anne Brodie wrote: ‘Memorable and exciting if not what you might call deep; it’s a bit too whiz-bang, too full of itself and its mischievous glories to be taken seriously… Lurhman obviously put his heart and hormones into making Elvis, but relax, Baz! ‘

Elvis is in cinemas now both in the US and the UK. 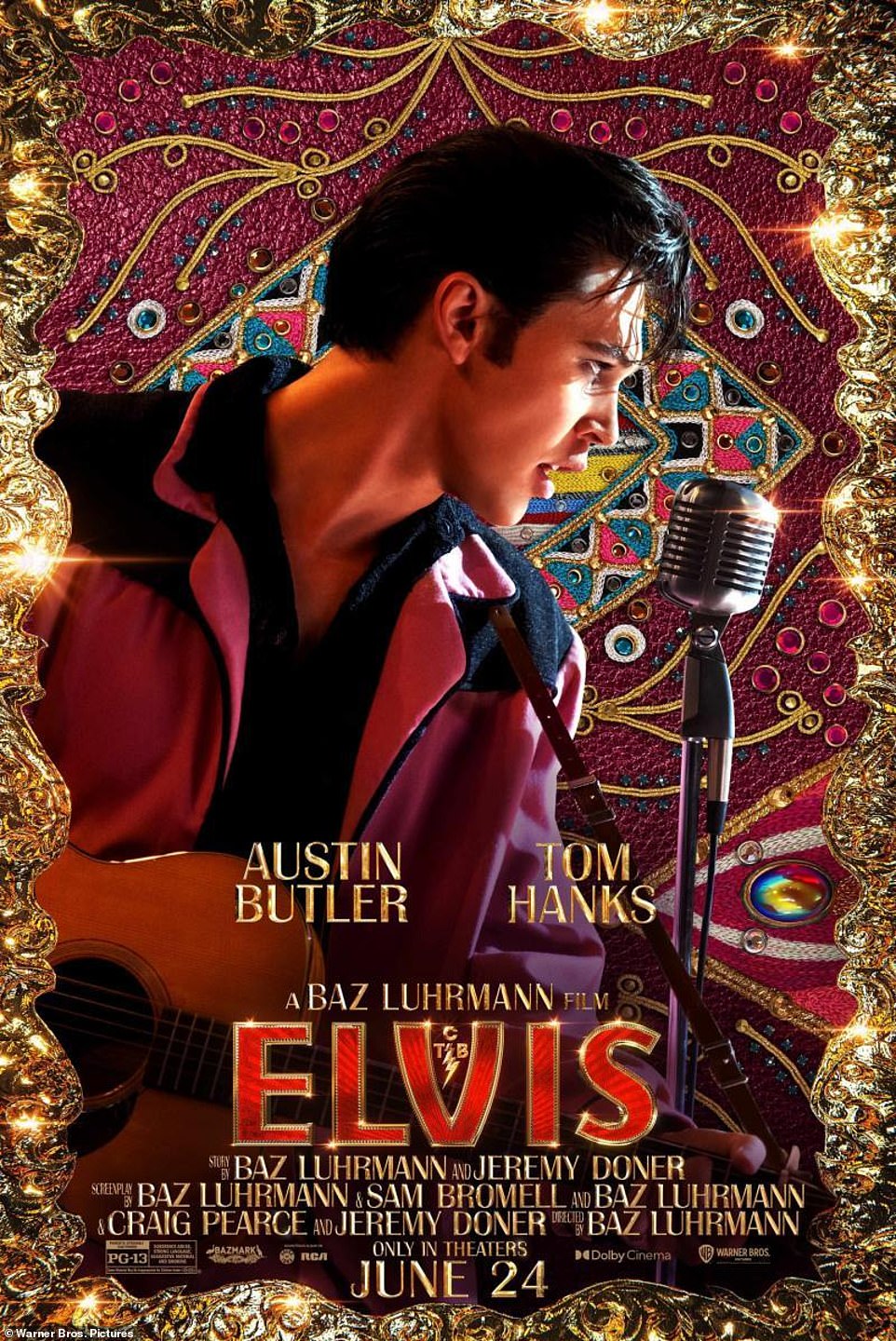 Saving grace: Austin Butler has been hailed as an ‘electrifying new star’