Rusty: The Resurrection of Rust (EMI)

Having made his name by singing about his travels, George Ezra was all set to follow a familiar pattern when he began working on his third album two years ago.

His debut, Wanted On Voyage, featured songs about Budapest, Barcelona and Amsterdam. Its sequel, Staying At Tamara’s, was inspired by a stop-off in a Catalan Airbnb. Both topped the UK charts, leaving him the undisputed champion of gap-year pop. This time around, his intention was to come up with ideas while walking the length of the UK from Land’s End to John o ’Groats.

He’d be closer to home – he lives in Hertfordshire – but the music would still be rooted in wanderlust. That was the plan… until the pandemic intervened to leave him stranded, looking inwards rather than outwards for inspiration. His walking boots mothballed, he liaised remotely with long-term songwriting partner Joel Pott, once of indie-pop stalwarts Athlete, before finishing the new material in Pott’s London studio.

So, has isolation dulled his sunny disposition or dimmed his ability to pen infectious musical earworms? On the evidence of Gold Rush Kid, not in the slightest.

Ezra, 29, is one of pop’s big-hearted, good-time guys. He emerged in 2014, in the slipstream of Ed Sheeran, as part of a wave of young men with acoustic guitars. He sang of bikini bottoms and lager tops, and his tunes became a backdrop to Joe Wicks’s lockdown fitness classes, with royalties going to NHS charities. At last weekend’s Platinum Party At The Palace, his two songs left Prince William beaming. 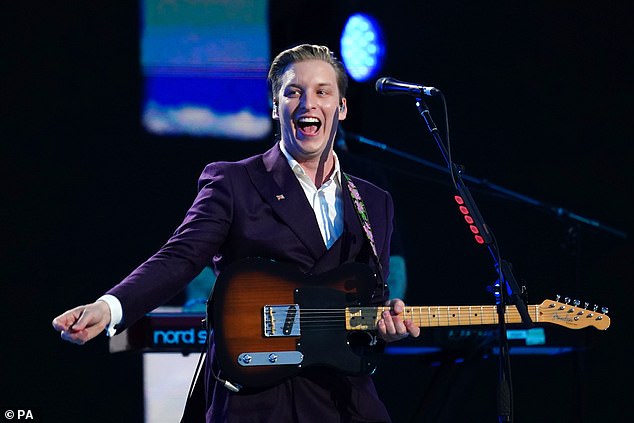 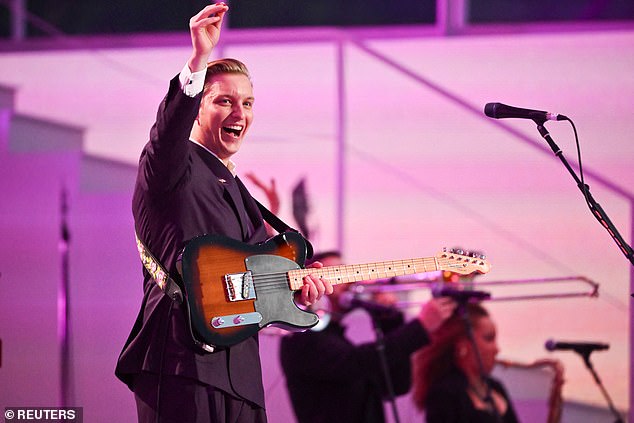 Into each life some rain must fall, and, in places at least, Gold Rush Kid is darker and more serious than its predecessors

There’s more good cheer here, too. The album opens with Anyone For You, a joyous wall of sound built around rasping saxophone, trumpet, calypso-style piano and a chorus bolstered by an army of backing singers.

In keeping with his happy-go-lucky approach, Ezra manages to keep on smiling even after being dumped by a girl called Tiger Lily.

Green Green Grass is similarly upbeat. Inspired by a funeral procession in St Lucia that turned into a street party with food and loud music, it’s bright and bouncy. ‘You better throw a party on the day that I die,’ he advises. But into each life some rain must fall, and, in places at least, Gold Rush Kid is darker and more serious than its predecessors.

There’s a certain heft to In The Morning, which laments a lost love. The synth-flavored I Went Hunting finds the singer, who co-hosts the mental health podcast Phone A Friend, addressing his struggles with OCD.

He’s also singing in a more conventional style than before. There was something gimmicky about the deep, mannered tone he adopted on his breakthrough single Budapest, but his delivery is now straighter. On Love Somebody Else – ‘because I’m giving up on myself’ – he even dips into an impressively soulful falsetto. Not everything here hits the spot. Dance All Over Me is a lightweight, European house music pastiche that contributes to a mid-album lull, but this is still an uplifting return that reiterates Ezra’s credentials.

Having finished Gold Rush Kid, the singer even managed to complete that long walk across the UK, capturing his adventures for a forthcoming documentary. In songwriting terms, though, he’s clearly just as effective when standing still.

Elvis Costello’s vein of creativity continues with the new mini-album The Resurrection Of Rust. Since the start of the lockdown, the prolific singer has made two studio albums, collaborated with Iggy Pop and French actress Isabelle Adjani, and re-recorded 1978’s This Year’s Model in Spanish.

He’s now gone back and reworked some of the songs he performed with his first band, Rusty, reconnecting with the original bandmate Allan Mayes in the process. A duo who played for beer money in the pubs and clubs of the early 1970s Liverpool, they mixed originals with Neil Young, Van Morrison and Randy Newman covers.

The new project came about after Mayes, who now lives in Texas, wrote to Elvis and suggested they do something together to mark their old band’s 50th anniversary. Costello duly assembled his touring band, The Imposters, and set about making ‘the record we would have cut when we were 18… if anyone had let us’. 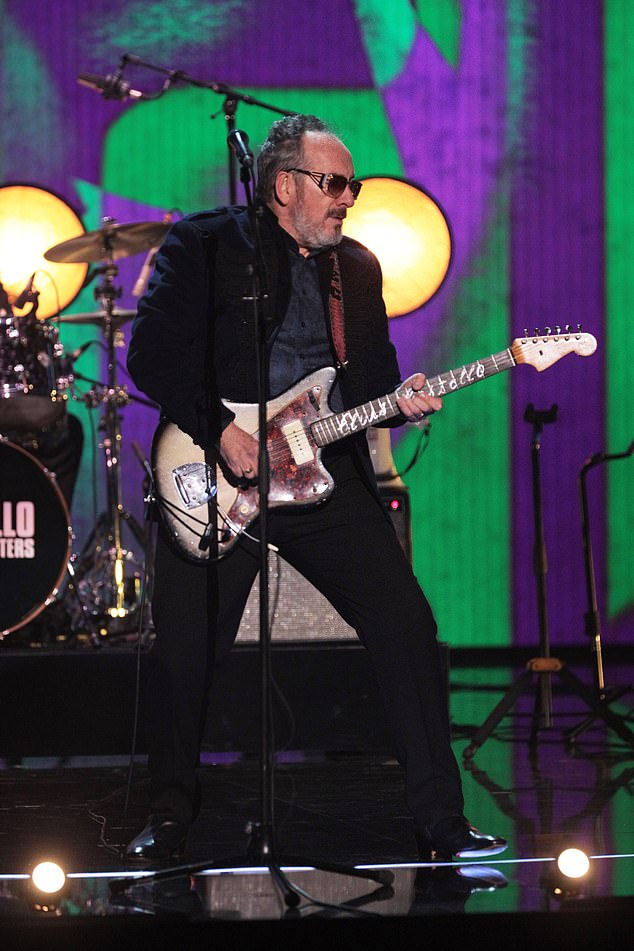 Just like their old live set, it mixes originals and covers. There are two Neil Young songs and two written by Nick Lowe. The latter’s Surrender To The Rhythm is unmistakably Costello in tone, its Californian, country-rock hue not a million miles from the sound of his 1977 debut album, My Aim Is True.

Of the originals, Maureen & Sam, sung largely by Mayes, is a portrayal of a struggling, Phoenix Nights-style cabaret act. Costello revisited the story, with fresh lyrics and a new melody, on 1980’s Ghost Train. Overall, this is one for Elvis completists – but it’s a fascinating snapshot of a musical giant finding his feet.

Neneh Cherry became one of the faces of the 1980s after singing Buffalo Stance on Top Of The Pops while seven months pregnant in 1988. A London-based Swede, her subsequent debut album, Raw Like Sushi, helped to give British dance music its own voice at a time when other acts were happy to simply mimic American styles.

That debut was given a 30th birthday reissue in 2020, and its best songs are at the heart of The Versions. A tribute album overseen by Cherry herself – a concept similar to last year’s Metallica Blacklist – it allows other singers to put a stamp on her songs, with five of its ten tracks coming from Raw Like Sushi. 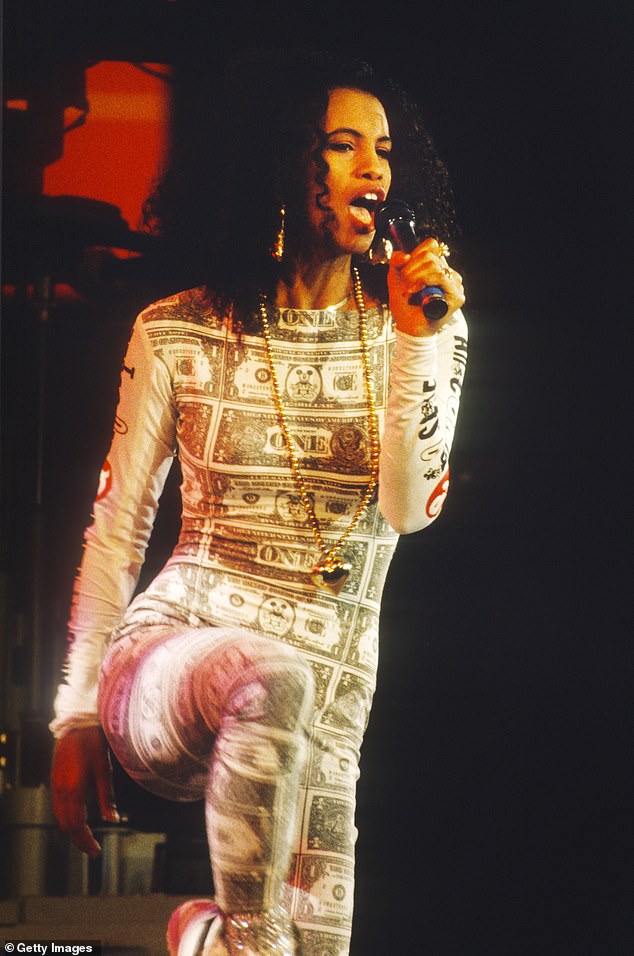 Neneh Cherry, a London-based Swede, became one of the faces of the 1980s after singing Buffalo Stance on Top Of The Pops while seven months pregnant in 1988

Sia sticks faithfully to the contours of Manchild, and fellow Swede Robyn teams up with rapper Mapei on Buffalo Stance. Another Swede, Seinabo Sey, tones down the 1980s pop-rap swagger on Kisses On The Wind. There’s a cameo, too, from Neneh’s middle daughter, Tyson.

Finally, after a year’s Covid-induced delay, Opera North’s much-heralded production of Richard Wagner’s last and most spiritual work has opened at the venerable Leeds Grand Theater.

It is hard to think of the fleshly Wagner as a pious being, but there is no escaping the ethereal import of the opening Prelude and the Good Friday music of Act 3. Wagner being Wagner, there is also high-flown verbiage, mumbo-jumbo and even magic.

Much of the strain of a five-hour evening is taken by the orchestra, onstage behind the action. Richard Farnes, the company’s former music director, is an unfussy, sensitive conductor and secures splendid playing – the horns were making wonderful sounds even at the end of the marathon. 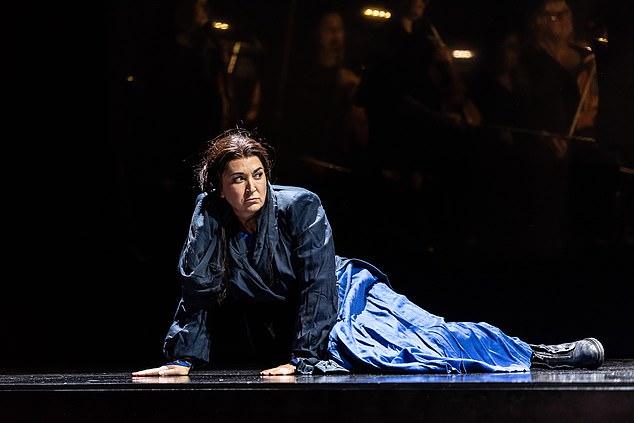 Your ticket will be worth it, just to hear Katarina Karneus (pictured) as Kundry, who does her best to seduce the innocent Parsifal

Your ticket will be worth it, just to hear Katarina Karneus as Kundry, who does her best to seduce the innocent Parsifal. Now 56, the Swedish mezzo-soprano seems untouched by the years and gives a formidable portrayal of this contradictory character.

I am unsure about aspects of Sam Brown’s production. As befits a director named after a belt, he keeps things pretty tight, but I was particularly dubious about the Knights steeping their hands in blood from Amfortas’s wound as part of their communion.

When the production goes on tour, it will be presented in concert form. It deserves to be heard, as musical values ​​are high.