Chloe Madeley showed off her growing baby bump in loved-up Instagram snaps with James Haskell on Friday as she told him to ‘cheer up misery guts.’

The TV personality, 34, grinned as she sat on her husband’s lap in a navy blue bikini and wrote that he had called her body a ‘giant drum.’

Yet in a second photo, the daughter of presenters Richard Madeley and Judy Finnigan gave James a quick kiss as he held onto his wife. 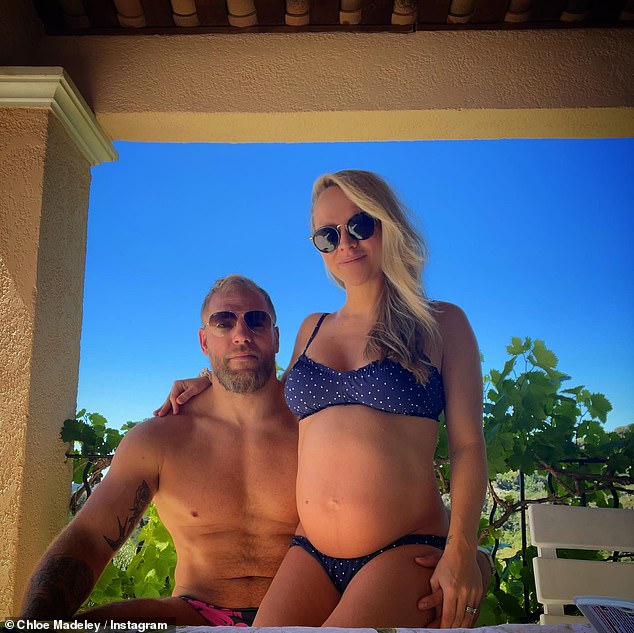 ‘Cheer up misery guts’: A radiant Chloe Madeley showed of her growing baby bump on Instagram on Friday as she called out her ‘angry’ husband James Haskell for calling her a body a ‘giant drum’

The former rugby player, 37, donned some swimming trunks, going shirtless, as the pair soaked up the sun in pictures from an unknown location.

Chloe sported some sunglasses, wearing her blonde tresses down in the relaxed photos. 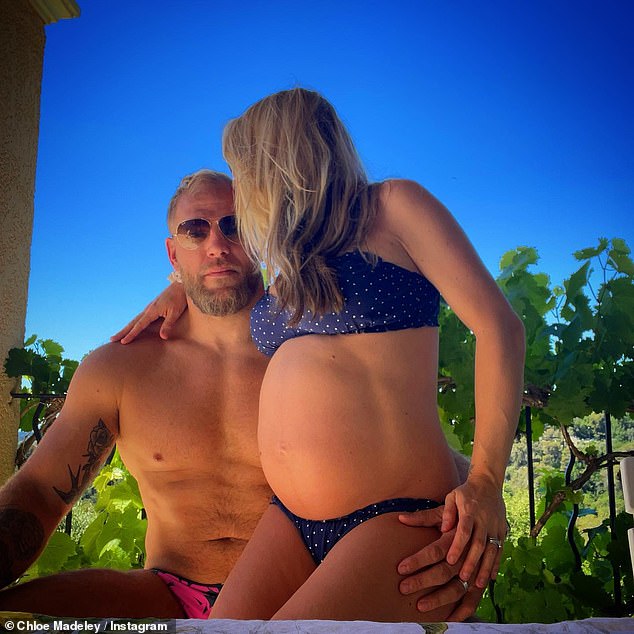 ‘Our last hurrah’: The television personality, 34, grinned as she sat on her husband’s lap in a navy blue bikini and playfully told him to ‘cheer up’

She wrote: ‘James looks angry because we’ve only been here 24hrs and he’s already broken one chair.

‘He said if my “giant drum” breaks another one so I can take a “cute piccy” he’s not paying for it. He also told me not to call it a “piccy”.

‘The facial expression in piccy 2 is his compromise between panic and a smile. Cheer up misery guts. ‘

It’s not the first time James has risked his wife’s wrath with jokey comments about her pregnant body. 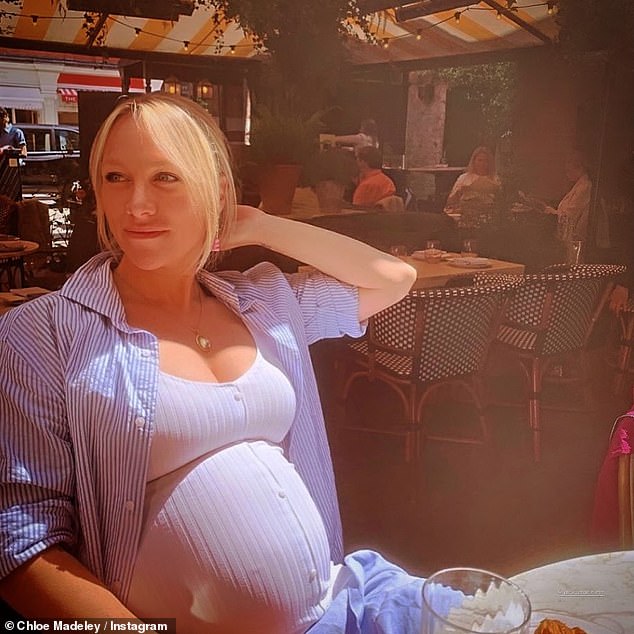 Glam: Last month Chloe showed off her growing baby bump while soaking up the sun while enjoying lunch in London on Instagram

In March he branded her a ‘huge sea cow’ in a very cheeky post.

Showing off her blossoming baby bump, the mother-to-be smiled for the snap while throwing her hands up in double peace signs.

While Chloe looked radiant in the snap, James couldn’t help but poke fun at her appearance, writing: ‘Bloody hell you go snorkelling and the first thing you see is a huge sea cow doing a mating display! 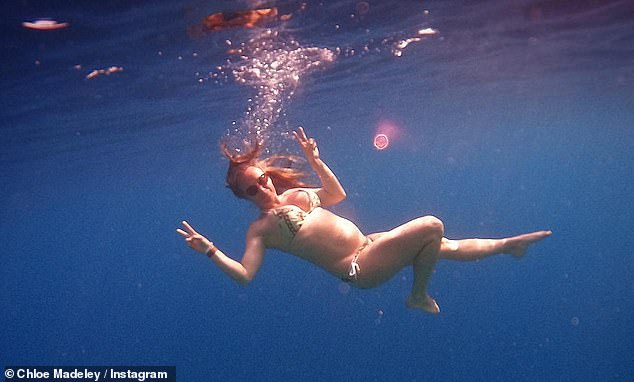 Shocking: James branded pregnant wife Chloe a ‘huge sea cow’ as she showed off her baby bump in underwater bikini snap in March

Naughty: 37-year-old James shared the picture to his own Instagram grid, but added a very cheeky caption

‘She appears to think I’m her partner. I didn’t know whether to harpoon it or feed it. ‘

Chloe didn’t respond to the comment, but shared the snap on her own page with the caption: ‘I wanted to try it, too.’

Meanwhile in May, Chloe showed off her growing baby bump with a stunning snap on Instagram, wearing a plunging white dress with a blue striped shirt over the top as she enjoyed lunch in London.

She captioned the post: ‘Summers in London’ and tagged her older brother Jack Madeley, 36, in the post.

Adventurous: Chloe didn’t respond to the comment, but shared the snap on her own page with the caption, ‘I wanted to try it, too’

James commented on the post: ‘What a hottie,’ followed by several fire emojis.

The snap comes after last month Chloe admitted pregnancy is ‘f *** ing hard’ and revealed she has suffered with meltdowns, vomiting and headaches.

Speaking to The Sun, the star said: ‘I love that I’m pregnant. I really love the bump, I love the curves, I’m really into it. It’s magical and I love it, but it’s f *** ing hard on your body. 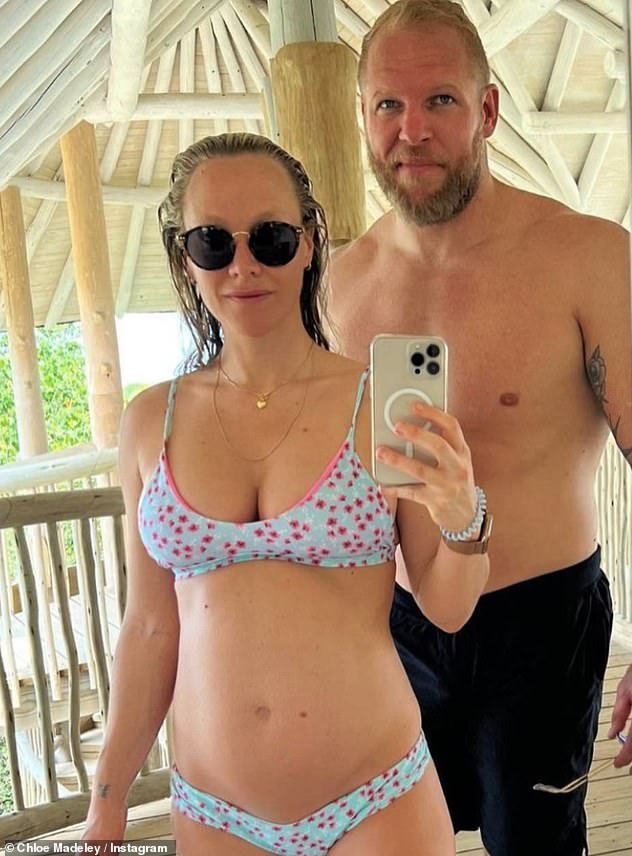 ‘I’ve had more than one melt down where I’ve just sat there like hysterically cried because it’s a lot of hormones, a lot of emotion. Every day isn’t always pleasant but I love it. ‘

Chloe said she is now going easy on her body and has gone from training five times a week to once or twice.

The fitness guru said that despite what people might think, she has loved the changes to her body during pregnancy. 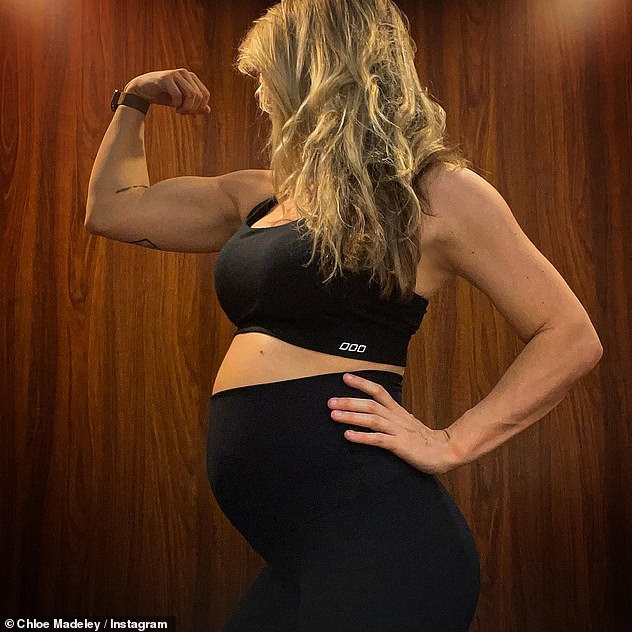 Chloe added that she and James already have plans for more children in the future and in an ideal world, she would like to have ‘three or four’.

It comes after Chloe spoke about the ‘utter fear’ she felt when she struggled to conceive with James.

She announced she was pregnant with her husband in February and is expecting a baby girl this summer.

Speaking to OK! Magazine, Chloe revealed the couple were on the verge of considering IVF and adoption before unexpectedly falling pregnant at the end of last year. 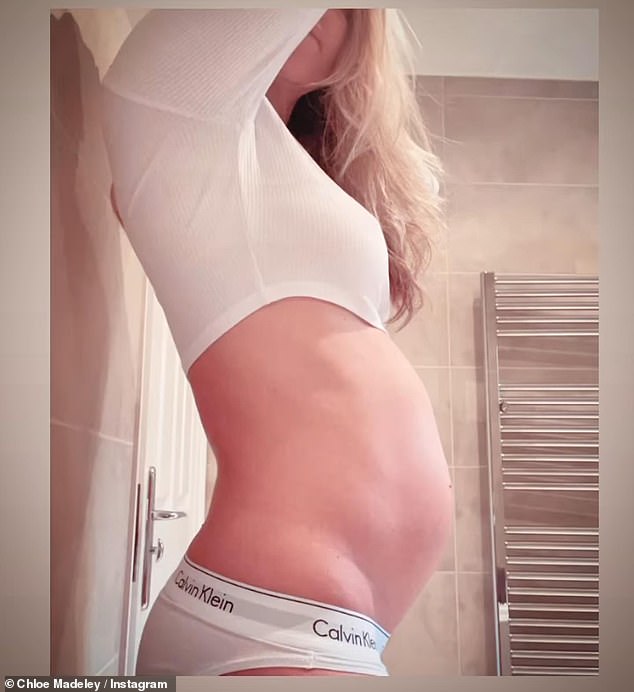 Chloe added that she and James already have plans for more children in the future and in an ideal world, she would like to have ‘three or four’. Pictured last month