Toyota has announced the 2023 Sequoia will start at $58,300 when it goes on sale in the United States this summer.

Costing significantly more than the 2022 Chevrolet Tahoe and Ford Expedition, the redesigned Sequoia is all-new and better than ever. While you can read more about the model in our full review, we’ll be using this article to break down the SUV’s pricing and equipment.

Kicking things off is the entry-level Sequoia SR5, which comes equipped with LED lighting units and 18-inch alloy wheels. Buyers will also find a flip-up rear window, privacy glass, and a black grille with a chrome surround.

Despite sitting at the bottom of the lineup, the Sequoia SR5 boasts heated front seats with eight-way power adjustment, a power moonroof, and a 12.3-inch digital instrument cluster. They’re joined by an eight-speaker audio system and an 8-inch Toyota Audio Multimedia infotainment system with wireless Android Auto and Apple CarPlay. The system also offers cloud-based navigation, an intelligent assistant, and over-the-air updates.

Rounding out the highlights are a leather-wrapped steering wheel, numerous soft-touch accents, and a tri-zone automatic climate control system. Buyers will also find an auto-dimming rearview mirror with HomeLink, a passive entry system with a push-button ignition, a panoramic view monitor, and a rear view camera. The eight-seater also boasts 60/40 split benches in the second and third row as well as an adjustable rear cargo shelf system.

Moving up the trim ladder is the Sequoia Limited, which begins at $64,700. It features a more upscale exterior with 20-inch wheels and additional chrome accents. The model is also distinguished by a unique gray metallic grille that features a chrome surround.

Bigger changes occur in the cabin as the Limited adds SofTex upholstery, heated and ventilated front seats, and a heated steering wheel. They’re joined by a driver’s seat memory function, second- and third-row sunshades, and a larger 14-inch Toyota Audio Multimedia infotainment system. Other highlights include a power folding third-row, an illuminated center console and glove box, and 400W/120V outlet. 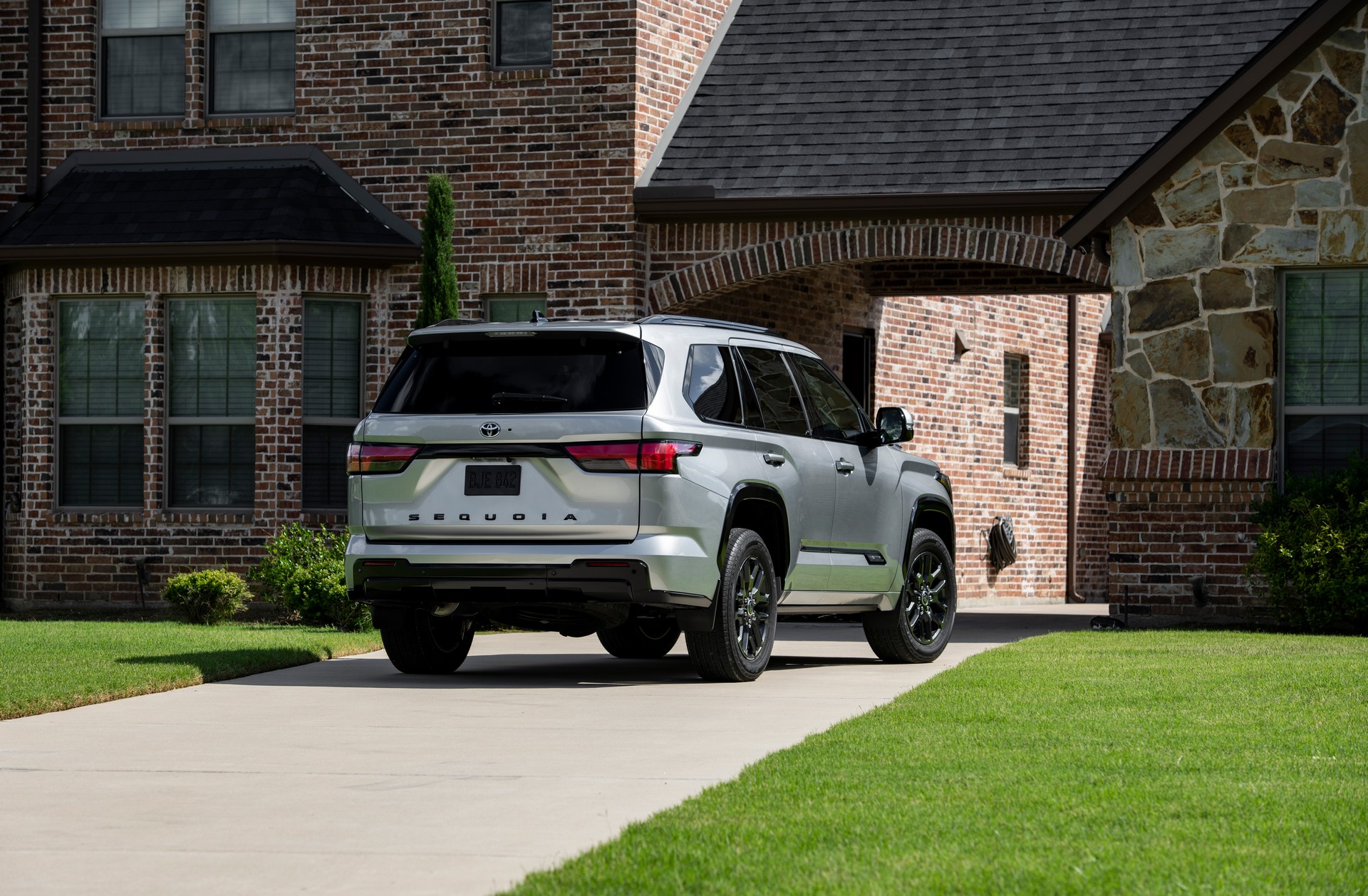 The interior takes center stage thanks to leather front seats with contrast stitching and 10-way power adjustment, as well as second-row captains’ chairs with heating and ventilation.

Other niceties include a panoramic glass roof, ambient lighting, a wireless smartphone charger, and a power tilt/telescopic steering wheel. The Platinum also comes equipped with a digital rearview mirror, a 14 speaker JBL premium audio system, and the Tow Technology Package that adds a Trailer Backup Guide with Straight Path Assist. 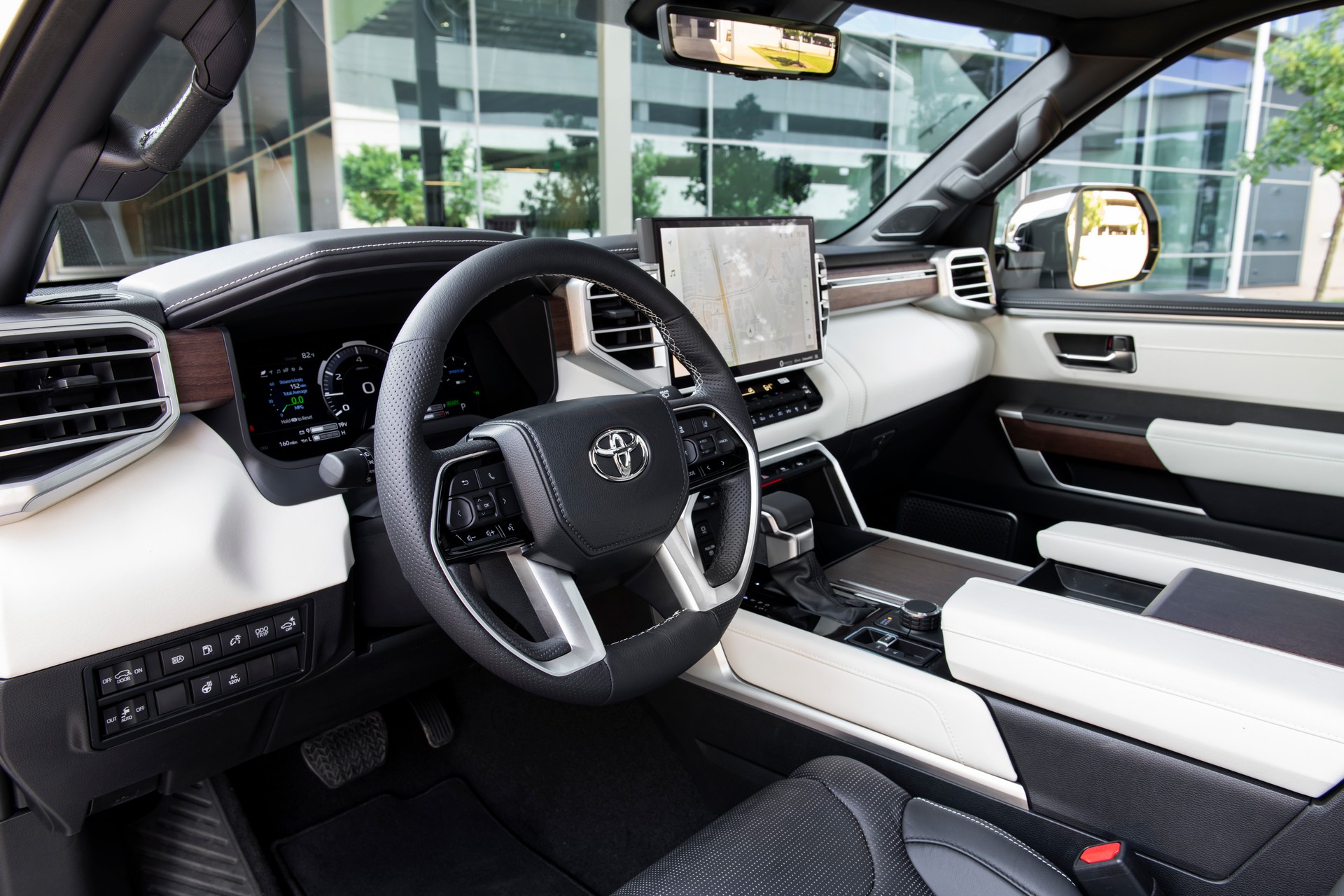 The interior wraps occupants in a cocoon of luxury as there are semi-aniline leather seats and American walnut wood trim. The model also boasts semi-aniline leather wrapped grab handles, special floor mats, and acoustic laminated front side windows to reduce wind and tire noise. There is also a backlit “Capstone” badge on the dash as well as a 10-inch color head-up display. 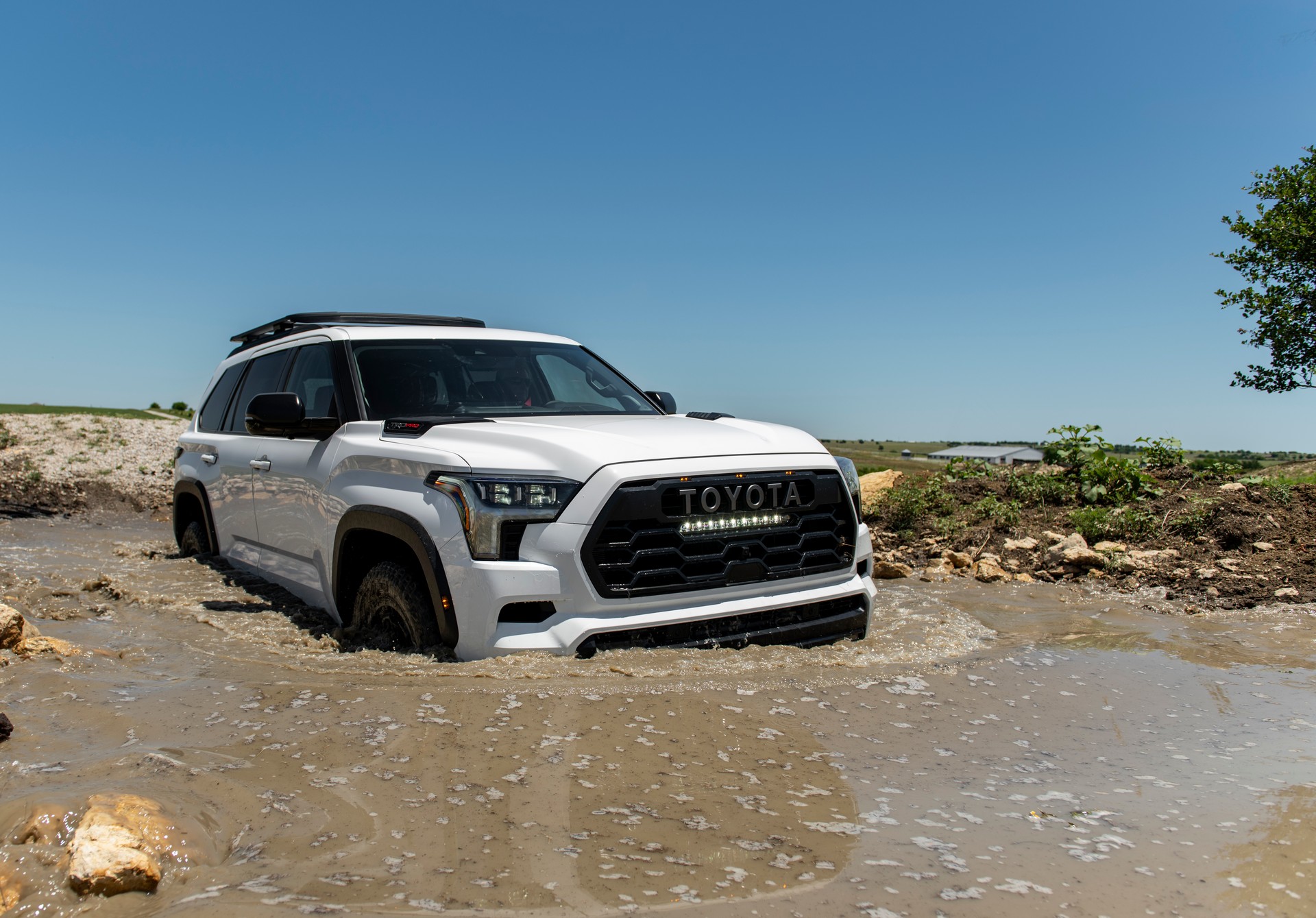 Customers looking to venture off the beaten path can opt for the range-topping Sequoia TRD Pro. The SUV starts at $76,900 and features four-wheel drive as well as a rugged exterior with an LED light bar, LED marker lights, and 18-inch BBS wheels wrapped in 33-inch Falken Wildpeak all-terrain tires.

While the interior Eschews has a number of luxury features, it comes equipped with SofTex seats that feature contrast stitching and technical camo inserts as well as eight-way power adjustment and heating / ventilation up front. The model also has a TRD-branded steering wheel with a red center stripe, a red push-button ignition, a leather-wrapped shifter with red accents, aluminum pedals and all-weather floor mats.

The upgrades don’t end there as the TRD Pro boasts a locking rear differential and an off-road focused suspension with FOX internal bypass shocks. The model also has Multi-Terrain Select, Crawl Control, and Downhill Assist Control.

Besides the five trim levels, Toyota will offer an assortment of options including TRD Sport and TRD Off-Road packages. The TRD Sport package is available exclusively on the SR5 and it adds Bilstein shocks and 20-inch TRD wheels. Inside, there’s a red push-button ignition, a TRD shifter, and aluminum pedals.

The TRD Off-Road package is available on four-wheel drive versions of the SR5 and Limited, and it adds a skid plate and an off-road suspension with Bilstein shocks. The package also includes a locking rear differential, Multi-Terrain Select, Crawl Control, and Downhill Assist Control; Also, it has the same interior upgrades as on the TRD Sport package.

Regardless of which trim is selected, all 2023 Sequoias come equipped with an i-Force Max powertrain. It consists of a twin-turbo 3.5-liter V6 and an electric motor, which is effectively sandwiched between the engine and the 10-speed automatic transmission.